What I Learned at Chevy's Snow Driving Training Event

Chevrolet recently invited Core77 up to their Winter Drive program in Lime Rock, Connecticut, whereby they put journalists behind the wheel of a Chevy on a snow course accompanied by expert driving instructors. The idea is to teach you how to better navigate poor driving conditions in everyday, non-specialty vehicles. 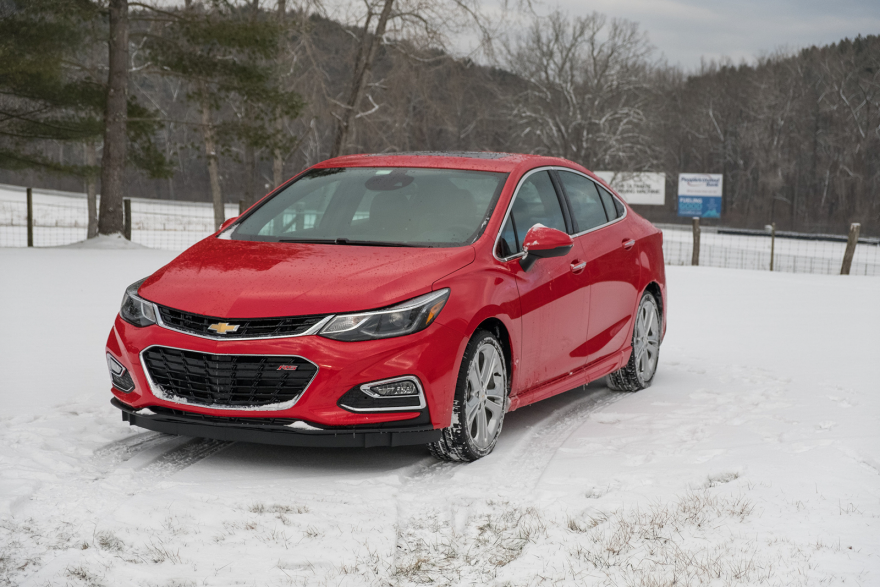 Years ago I attended a different snow driving event that featured winterized, turbocharged four-wheel-drive vehicles outfitted with snow tires, and the emphasis was on speed/fun. In contrast, the appeal of this event is that it more closely mimics real-world situations: They put you in a plain-Jane Chevy Cruze with plain-ol' all-season radials, as if you never got around to putting the snow tires on, and then a blizzard blew into town and now you've got to get to the grocery store on unplowed roads.

To that end the track is intentionally made tricky to drive, covered in thick powdery snow and with inclines, sharp turns and S-curves. Two features were particularly difficult: The first was a decreasing-radius downhill right-hander, and while trying to tackle it, I overestimated my ability, taking the turn too fast and hard. The car, pushed past the point of traction, simply went straight down the hill and sent me off the road into the powder despite my tender ministrations to the steering wheel, brake and gas. 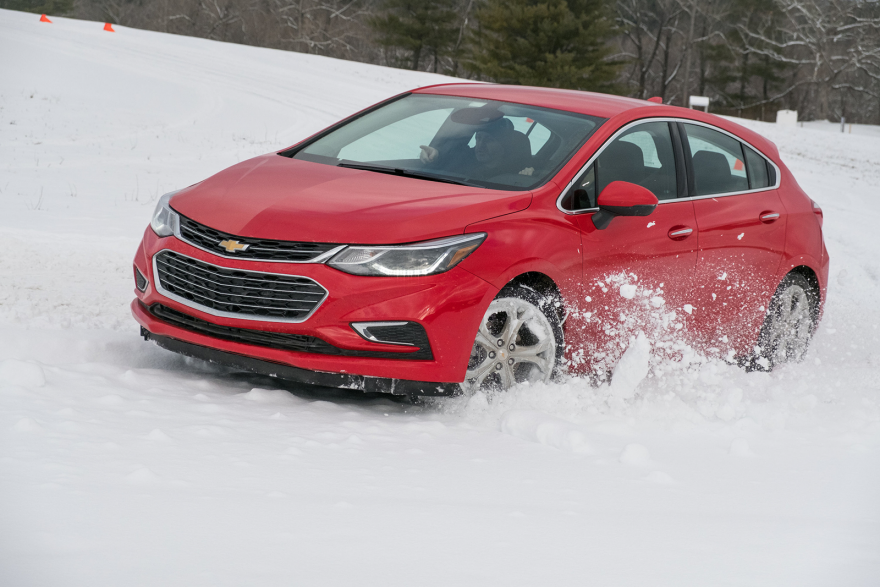 The second tricky feature was a sweeping curve leading into an uphill straight covered in thick powder. Obviously you need to slow down to take the curve, but if you go too slow, you don't have the momentum to get up the hill at the end of it and the wheels just spin in the powder. I could not figure out how to consistently take the curve with enough speed to then power up the hill without getting stuck.

After several laps of this, where the instructors were not allowed to offer any advice—the idea was to see how we did without any instruction—they were finally given the green light to chime in.

My instructor, Dean, told me to do something totally counterintuitive. Previously I had been trying to manage these tricky curves with delicacy and finesse, tapping the pedals and easing the wheel; but instead he told me, as soon as it looked like I would get stuck or lose traction, to give it a lot of gas and turn the wheel hard.

I did, expecting the tires to only spin fruitlessly faster while the car spun out. Instead something surprising happened. When I mashed down on the gas, instead of the engine revving into orbit it made a muted noise and the tachometer hardly moved; when I locked up the steering wheel the car didn't spin out. Instead the car just kind of automatically corrected itself and gently moved through the turn, like a horse finding its footing and advancing. It was like the car figured it out. "Y'see that?" Dean asked, having recognized my skepticism. 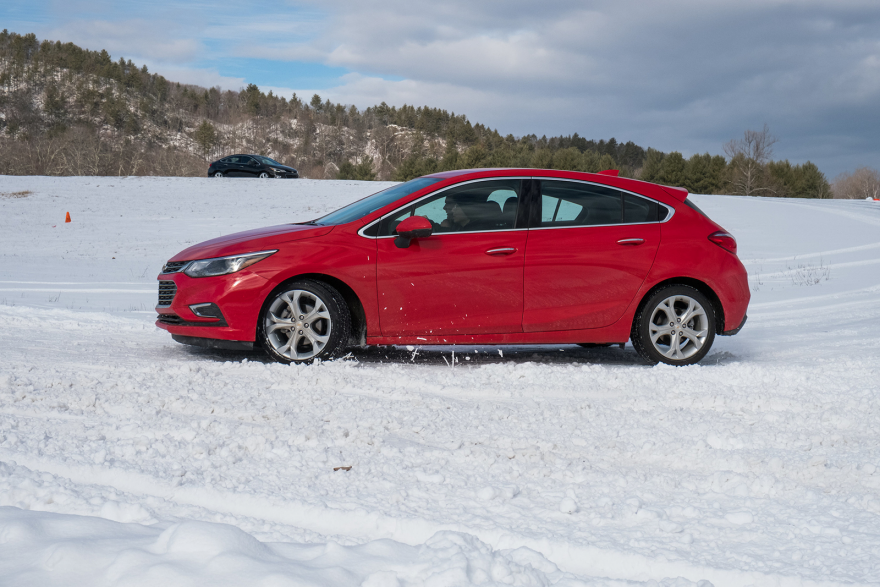 In essence, he explained, it was indeed that the car was figuring it out. When I locked up the wheel and floored it, rather than inducing oversteer "the car is sensing that you want to go in that direction," he explained, "and trying to get you there. So it's borrowing a bit of left rear wheel brake, a bit of right front wheel acceleration, in order to auto-correct and essentially accomplish what you're telling it to do."

As someone who learned to drive a long time ago on "dumb" cars, this kind of blew my mind.

"Do it again and watch how the car just pivots into place at the end," Dean said.

I did it, coasting into a turn and waiting until we lost traction, then hitting the gas hard and locking the steering wheel to the left. Same result as before: The car gradually transitioned from sliding sideways to correcting course and steadily moving forwards.

Dean explained that the average driver tends to overreact when losing control of a car, and that technology can now correct for that, which is why he had me "overreact." This took me more than a few laps to wrap my head around. When I first learned to drive, the throttle, steering wheel and brake were analog controls that did directly what you told them to, occasionally to your own peril; now they're more like an interface to provide interpretable instructions to the car. 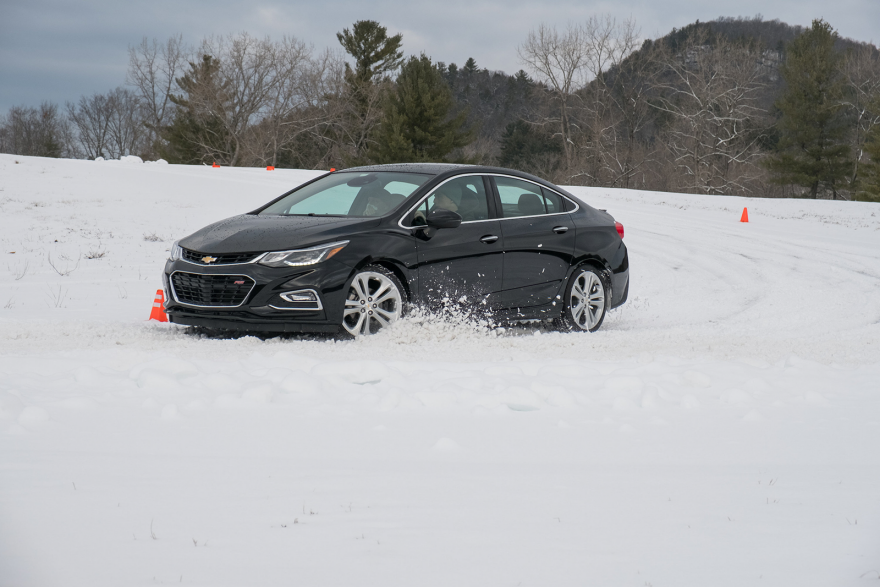 The conventional wisdom is that cars will some day all be autonomous. But what I learned at the Chevy event is that current-day engineers are still thinking up all sorts of clever little features to make manual driving safer and easier. 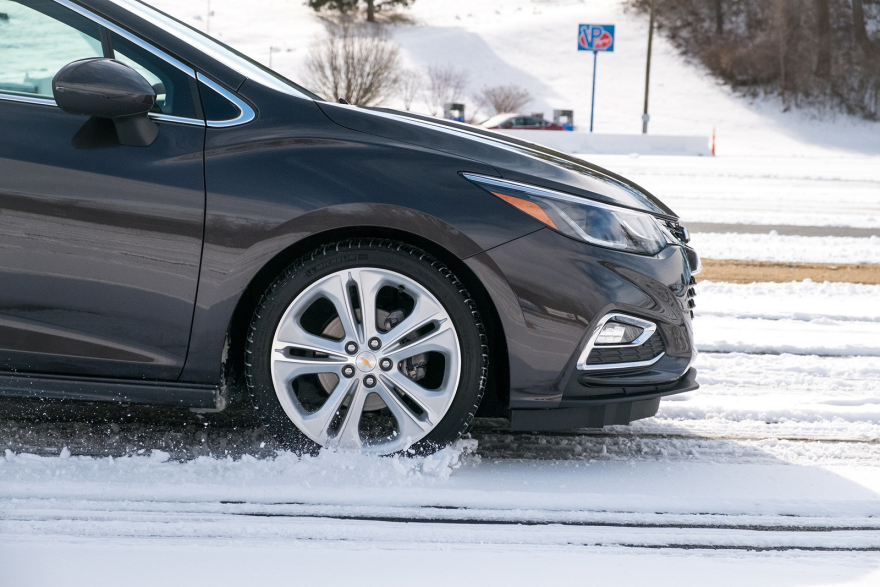 Lastly, we'll share with you the winter driving tips that the instructors gave us during the briefing. It's below, verbatim.

Driving in wintery conditions is dangerous and there is fundamental advice given out every year about driving in winter weather. It includes: removing all snow and ice from your vehicle so you can see properly, making sure your tires and battery are in good shape and even carrying kitty litter in the trunk the event you get stuck.

We want to offer some additional little-known tips so you are prepared for this winter driving season:

1. The most dangerous/slippery temperature range between 24 – 34 degrees.

You likely have a mental note that anything below 32 degrees Fahrenheit is dangerous but in reality, the worst range is 24 – 34 degrees when there is snow or ice on the ground. Cars driving on a snow/ice covered surface in that range causes the snow/ice to melt and wet snow/ice has less grip than solid snow/ice.

We know that snow and ice offer less traction than a dry surface but most don't realize how much less. Snow has half the traction of a dry surface and ice has 75% less grip. Adjust your driving (and braking!) accordingly.

3. Take off bulky coats and gloves.

Driving is a sensory experience and bulky gloves can mute the feedback through the steering wheel. It also makes it more difficult for you to operate the secondary controls like turn indicators and the heat. Bulky coats can restrict your arm movement and limit your reactions in the event of an emergency.

Speaking of heat, you should avoid the urge to turn the interior of your vehicle into a sauna to chase the chill away. Keeping the inside of your car too warm can make you drowsy. You should remain alert at all times when driving, especially in winter conditions.

Similar to the advice about gloves, big bulky boots make it more difficult to feel the accelerator and brake pedals. They can also slow your reaction time in an emergency situation.

Bonus tip: The easiest way to stay safe in a winter storm is to stay off the roads. But if you must drive, keep the tips above in mind.

What I Learned at Chevy's Snow Driving Training Event