This is not about the current debate on manufacturing. This is about people learning to make things with their hands. 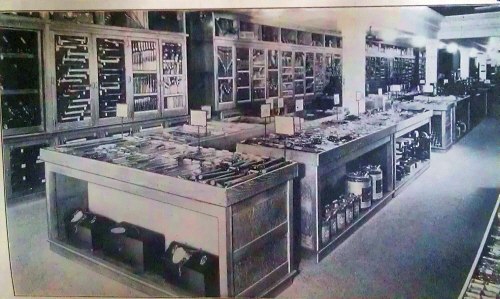 This image is of the tool department of the E. L. Wilson Hardware Company, Beaumont, TX. and comes from the book "The Modern Hardware Store" edited by Carl W. Dipman 1929.

Years ago the Times ran an article called "A Nation That's Losing Its Toolbox." If you haven't read it, you should. More recently, Doug Stowe's constantly updated Wisdom of the Hands blog is all about how we are falling short of teaching our kids craft. Reading both of these gives you a sense of the loss of craft skills, the effects on the economy and what happens to our general national psyche and self-identity when those kids who never had shop class grow up.

Some of the points raised by Times writer Michael Falco weren't very persuasive to me. He mentioned that cooking shows and DIY shows are very popular, but he didn't seem to know what to do with that fact. He described it as wistful nostalgia. To me, it's striking that although these shows are ostensibly about craft, they're less about doing it yourself and more about consuming craft. He also doesn't mention some of the root causes of the decline in craft skills, like the increase in the work week and the disappearance of leisure time. As a nation we want to be craftsmen, but many people don't have the time and have lost the inclination to get their hands dirty. Falco also doesn't mention that a lot of the things people used to build or repair have become too inexpensive and too hard to repair to justify the time.

The article notes that many tool customers are immigrants, and suggest this is further evidence of the loss of skill in the mainstream. But, at least in the largest cities, crafts were always dominated by immigrants. Even as far back as Duncan Phyfe, who was born in Scotland, immigrant craft labor was pretty common. Still, the article does raise important points, like how can we revive a manufacturing base when as a nation we get further and further away from the notion that we can make stuff.