IDEO's latest transportation project, The Future of Moving Together, merges two current transportation trends—autonomous vehicles and ride sharing—into one future scenario that questions both what it means to own a car and the concept of shared spaces. 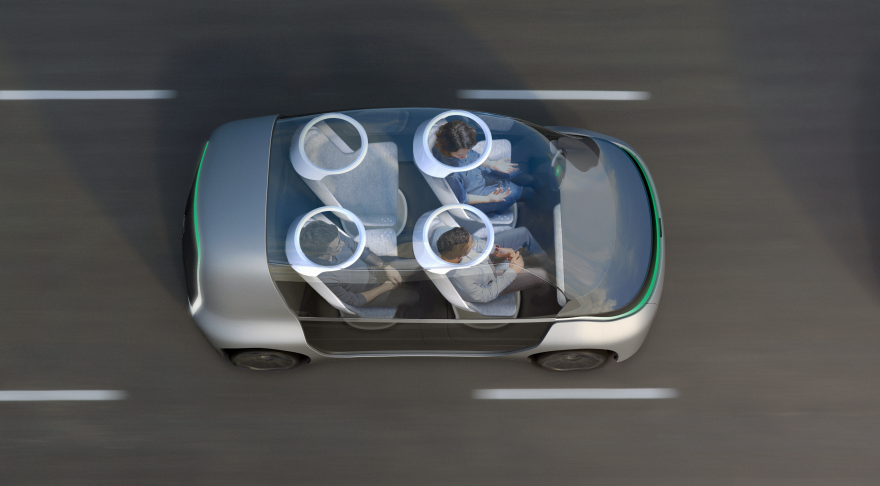 The idea behind the vehicle itself is simple—the autonomous car is, well, autonomous. However, the project as a whole hints at much more than just a car that drives itself. Promoting community bonding through ride sharing and a working relationship between human and technology, The Future of Moving Together forces us to think about the shifting role cars will play in our lives in the very near future.

We sat down with Danny Stillion, Partner and Executive Design Director of IDEO Palo Alto, to discuss the design process behind The Future of Moving Together and what this concept means for the future of driving.

Core77: Autonomous vehicles and ride sharing have proven to be two difficult concepts for designers to tackle. What prompted your team to merge the two together instead of focusing on one at a time?

DS: We feel that there's some pretty interesting future scenarios around new ownership models, both ride and car sharing, as well as potentially a third aspect that we mixed in—the convergence of the sharing economy and the gig economy. If you notice, there's a couple in this scenario that are using a vehicle that's used by somebody else for a couple hours. They've got the option of going to pick up somebody's groceries to offset the cost of their shared session. 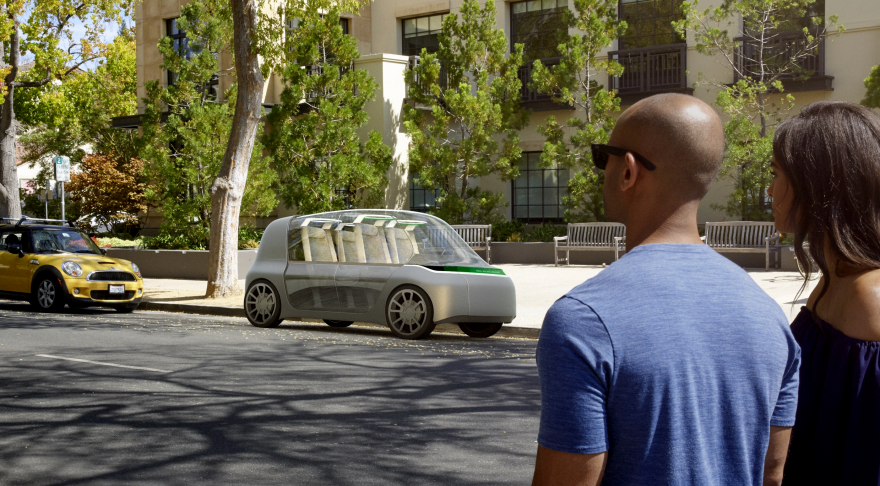 One of our goals when we do provocational points of view like this is to touch on new behaviors that may just be starting to emerge or that might be signaled towards some of the trends that are opening up in the market now. We always find it's interesting to stimulate richer conversation if you think about some of these trends converging and overlapping in interesting and new ways.

Did you run into any surprises during your design development phase?

As we started to get into designing a vehicle intended for sharing, some of the interior design concepts started to address more specific problems. For example, somewhere around 15% of us may have some issues with motion sickness in autonomous vehicles in the future. We were delighted and surprised to find ourselves going down this route of tackling a little bit of that problem, in terms of people today bringing their own devices to vehicles in a very ad hoc way.

On that same note, we're actually working to get peoples' viewing plane up so they can not only do something productive while the car is driving, but they can maintain situational awareness as well. There's a couple of studies we came across that indicate that if you can get people looking up at the road, even peripherally, it would increase and enhance their comfort and potentially combat motion sickness. 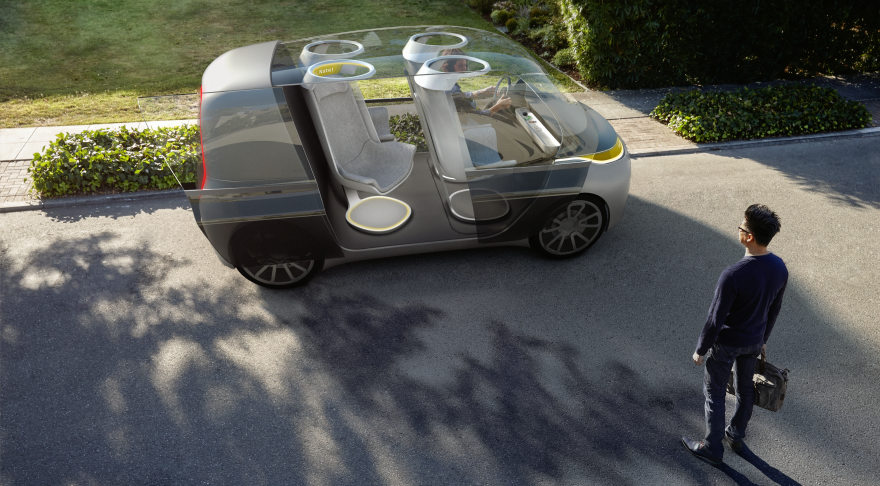 There are some other things like exploring this new visual vocabulary for mobility. A lot of folks in today's ride sharing context are having a similar problem: As vehicles approach, it can be hard to discern which vehicle is really arriving for you. So, we have a front display bar and lighting elements up high in the individual seating pods that can be seen from a distance that reassures users that the car arriving is indeed for them. 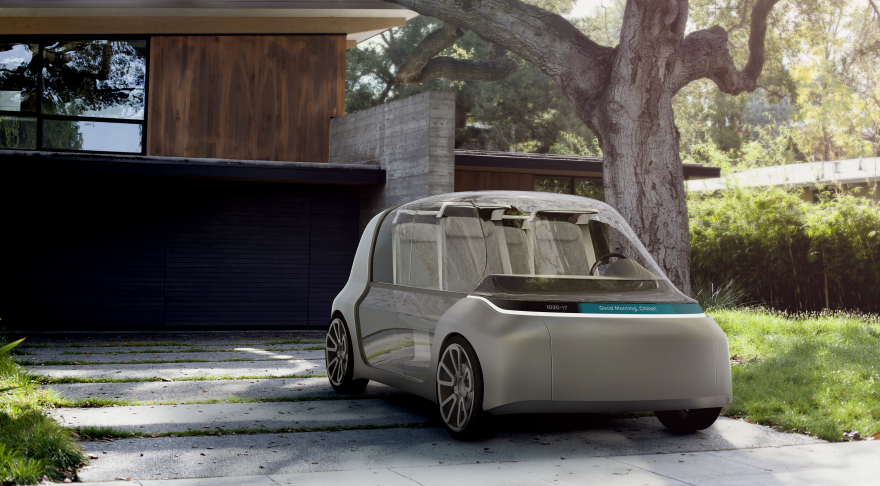 Today, we rely on these little micro interactions that take less than a second, "Does that person see me? Can they give me a quick hand gesture to go ahead and cross the street?" There's been some good work out there already done by various OEMs, and we definitely saw a need to build on that—that pedestrian to vehicle interaction. Incorporating as much hand holding as possible to make sharing even more efficient and hopefully safer is part of what we were focused on there. I think it's going to be very interesting to solve for new social behaviors, norms, and paradigms, as we start accommodating more of an autonomously or connected, autonomous, shared, and electric fleet.

Many people view autonomous vehicles as a way to make our lives easier by eliminating the need to focus on the road. However, your concept seems to view these vehicles from the perspective of expanding free time—allowing extra time for things like work, video calls and even meditation. Can you elaborate on the idea that autonomous vehicles will help free up time for more productive activities?

A lot of folks enjoy ride sharing because they get an uplift and positive effect from socializing with others. Having an engaging conversation in the car is tough to do today while you're burdened with the task of manually driving. With our scenario, we anticipate richer socialization. You can see in the video that there's a tip of the hat to some productivity that's happening. Perhaps, at the beginning of your day or at the end of the day, you're ramping into those workplace activities while you're also on the go.

Future of Automobility: Moving Together from IDEO on Vimeo. 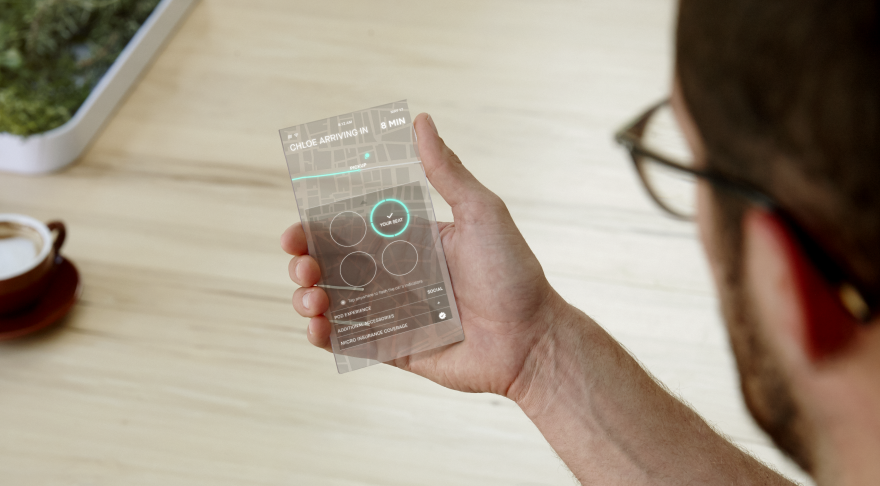 That might seem quite subtle, but some vehicles are really intended to be a conveyance from point A to point B. Through thoughtful design, you can really maximize your experience and, frankly, have a choice in the kind of experience you might want to have when you're on the go. Again, ranging from that spectrum of really relaxing and having some quiet time, like we've seen in a lot of our research in the airline industry. People see long flights as the last vestige of private me time. There may be some people that relate to shared mobility contexts in the same way.

In the present, cars are very personal vehicles—most people are attached to their cars and have personal connections with them. How do you see this connection changing over time as vehicles become autonomous and can be shared with others?

We've definitely seen that folks do want to have a relationship with their vehicle. This vision of the future is still projecting that ownership will persist to a certain degree across the mobility spectrum. Then folks will be offsetting the cost of ownership through car sharing, which leads right into your question about personalization.

One of the things that we've seen in some of our work that's a bit of a barrier to sharing is that people use their cars as an extension of the home. Designing for ways to have a car rapidly transform from being your personal mode of mobility to a shared one was something that we put some thought into.

There's this tray in the front of our vehicle that allows for those things that you might want to have with you when you're on the go, personal items that people tend to have scattered around, whether it's media devices, or just things like chewing gum. The way that we play this out is that those items are available when the owner is in the vehicle, but if they put the car in sharing mode, that whole tray would slide into the dashboard and be inaccessible to other passengers. 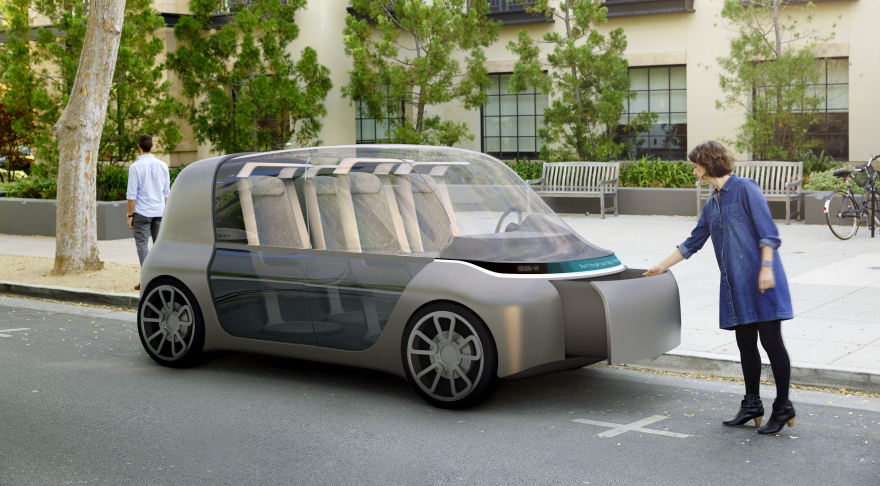 The good news here is that if you're working with connected, autonomous, shared electric vehicles, they generally have a lot of open plans as a platform. A lot of space is freed up because you don't have an internal combustion engine in the front. The personal storage options are really optimizing for quick transformation of the car from a personal setting to a shared one. That gets into lots of other things as well like is the car easy to clean? Can you almost hose down the interior flooring like you can with a Jeep Wrangler or something?

We think people are still going to have a special relationship with the cars. Particularly those people that opt for ownership, moving forward into the future—even though they may be offsetting the cost of ownership by sharing the car or accommodating others through ride sharing. 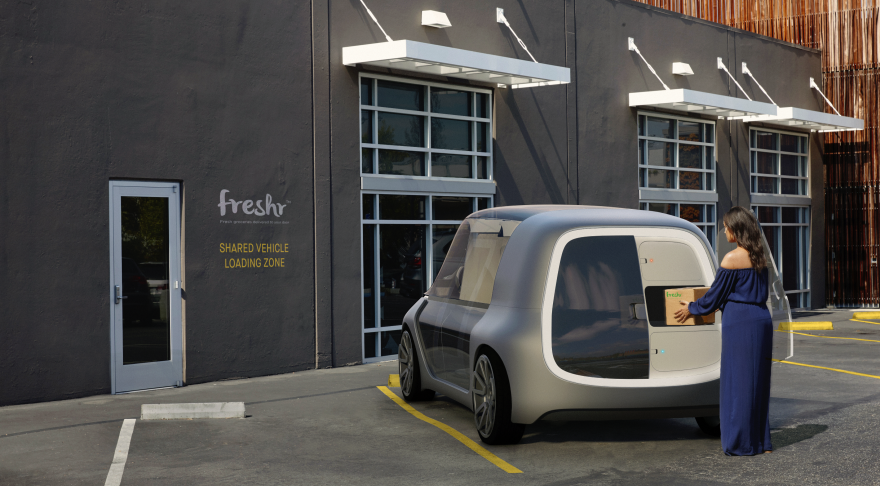 We always start with the human-centered angle on things. We're always looking out for those human needs and motivations. Often, if you address those well through design, they can be moments of unanticipated delight for folks. We definitely want to encourage that.

Is there anything else you'd like people to know about the development of The Future of Moving Together?

Our first angle with this scenario is to increase the average number of folks that travel in cars together. We visualized, hopefully, what people see as a potentially compelling scenario to get from one person per car to three, or four, or six people per car. That would help a lot with maximizing our existing infrastructure, not having to build more lanes in our highway systems which, frankly, a lot of our cities just don't have room for anymore.

The second angle is overlapping moving people around and moving goods around. We're seeing a lot of activity in that space today with things like Uber Eats and Postmates. If you can be not only moving more people around per vehicle but also doing a little bit of work that is traditionally falling on FedEx or UPS to move goods around—that's an interesting thing for us. It allows us to really start to maximize the existing infrastructure we already have in place. There's a lot of potential for these new combined services of moving people and things around—we're super excited about that.

The Future of Moving Together builds upon IDEO's The Future of Automobility project, which includes more mind blowing future transportation scenarios. Be sure to view the whole collection here.