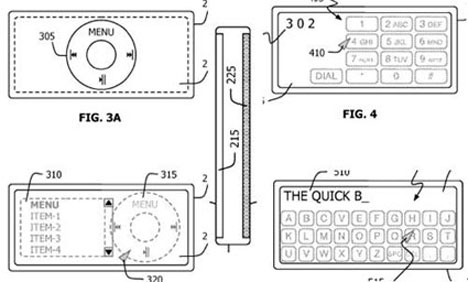 Although touchscreens are apparently the wave of the future, there's one design flaw no one's yet addressed: when your finger's on the screen, it's obscuring the very elements you're supposed to be interacting with.

Leave it to Apple to come up with a workaround. Although still only in patent form (ostensibly slated as an iPod feature), Apple's new interface design is undeniably clever. The entire front face is a screen with elements or buttons on it. To interact with them, you place your finger on the rear of the device, which is touch-sensitive (but not a screen), since the rear is where your fingers would end up anyway, simply by virtue of holding the thing up.

A cursor on the screen on the front indicates where your finger is, as if the device were transparent. When the cursor gets where you want it, you press the rear of the device, and it registers visibly in the front.

We can't wait to get our fingers on one of these things...even if we won't see the fingers.