MCM Furniture Design History: The Evolution of the Pernilla Chair

Before they were chairs, Bruno Mathsson's creations were shapes sculpted in snowbanks

This is a companion entry to Mid Century Møbler's "MCM Find of the Week: The Pernilla 69 Chair." 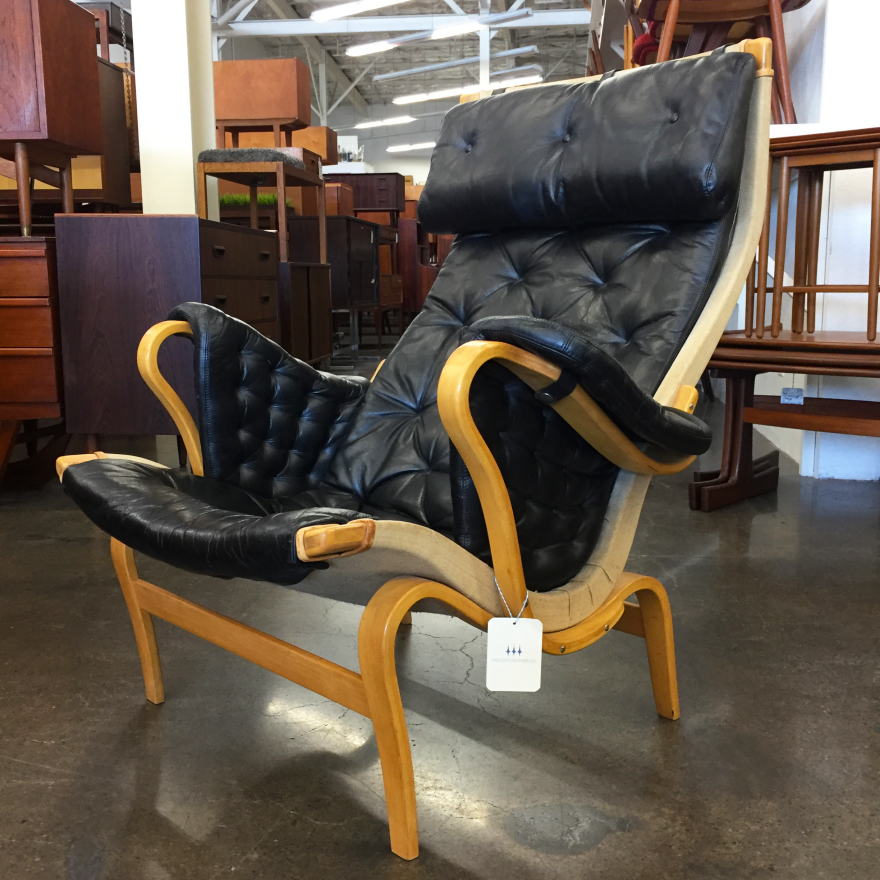 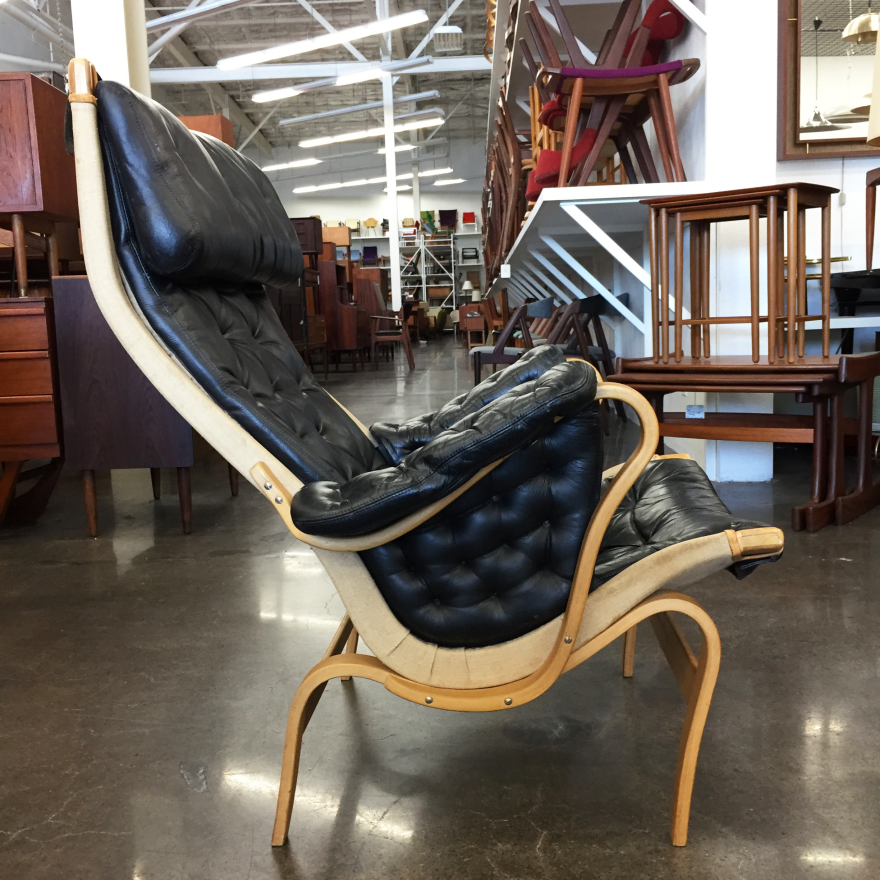 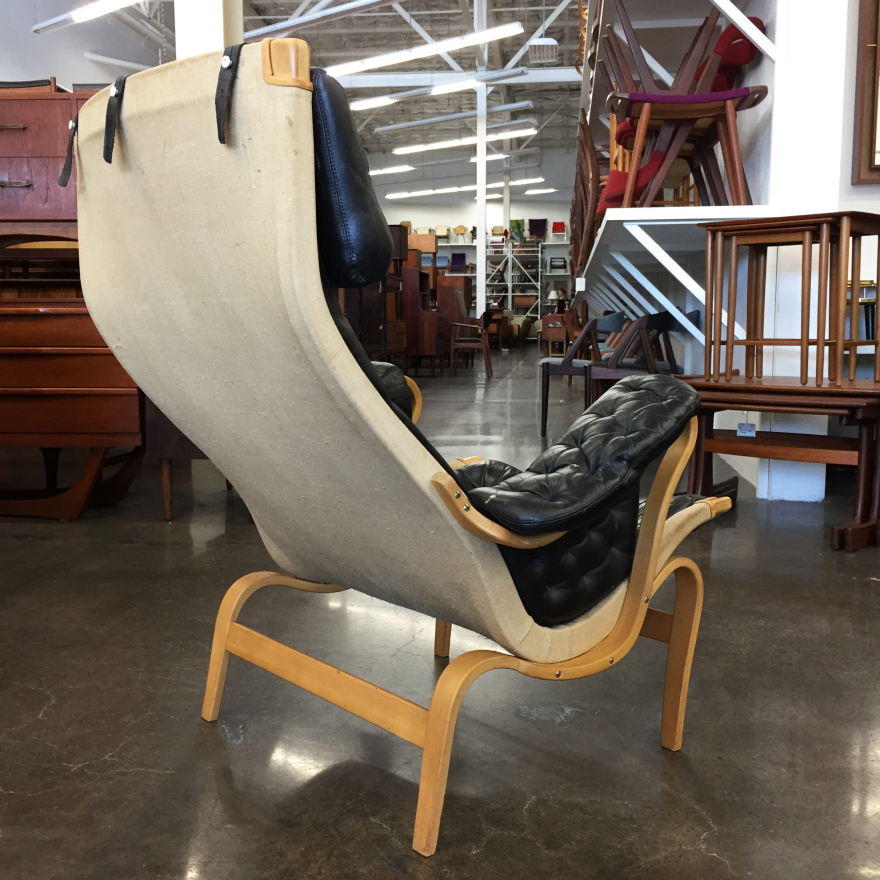 Here we'll explain, to MCM fans and/or students of design, why the chair is significant, how it evolved and where it fits within the mid century landscape. We'll start with a little background on its designer, then follow his journey to create the perfect chair. 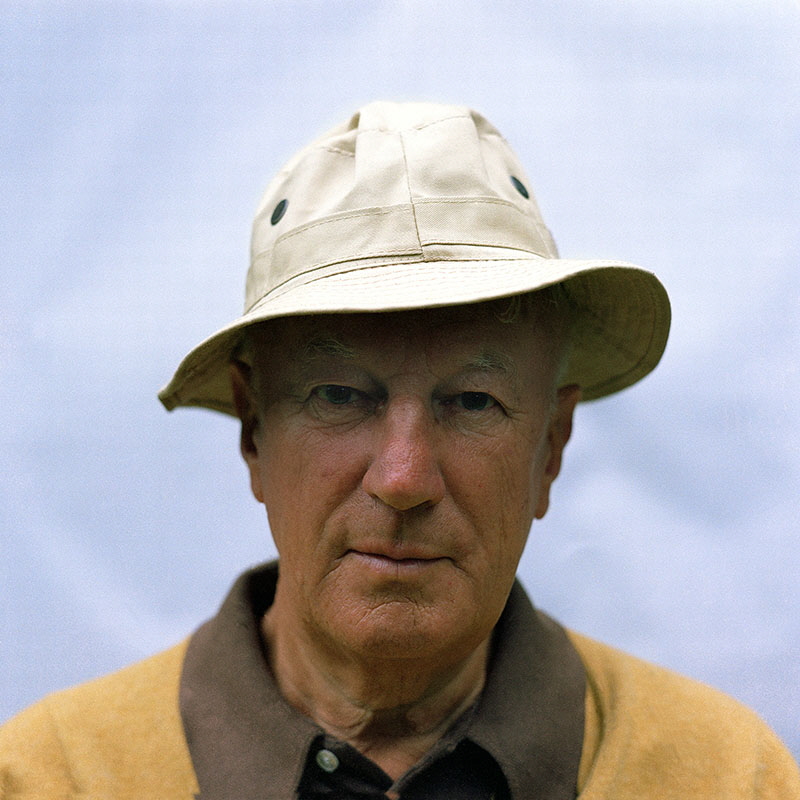 Most people think of snow as weather, but innovative designer Bruno Mathsson saw it as a tool. An early proponent of ergonomics, he would press his body into snowbanks to make imprints, trying to create an ideal shape for seating that he could replicate in his workshop.

Mathsson was born in 1907 in Värnamo, Sweden, an area surrounded by dense forests and flowing waterways whose power the locals harnessed with waterwheels. The combination of a ready supply of wood and a free energy source to power sawmills made it an ideal location for furniture fabrication. 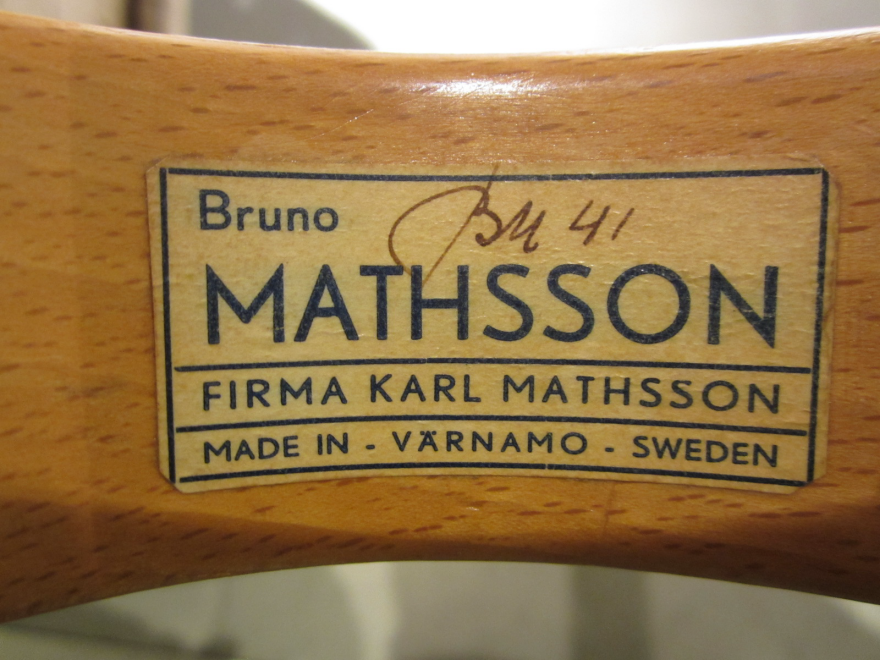 Karl Mathsson, Bruno's father, was a fifth-generation master cabinetmaker who trained his son in the craft. Bruno gained both technical competency and a deep understanding of wood, but was spurred to push past traditionalism by curiosity. In 1929 he began studying design books that he arranged to have shipped to him by train, borrowed from the Röhsska Arts and Crafts Museum in Gothenburg.

The following year, Mathsson won a prize at Värnamo's Arts and Crafts exhibition for a traditional-style baroque chair he had produced in his father's workshop. The prize included both a stipend and a ticket to visit the 1930 Stockholm Exhibition, which launched the Functionalist design movement in Sweden. The Exhibition formed a deep impression on Mathsson and, along with his self-study of the Röhsska books, led him to develop his own style.

His chance came almost immediately. That same year Mathsson won a commission to design the chairs for Värnamo Hospital. Rather than incorporating the traditional method of spring upholstery, Mathsson created an experimental design where the seating surface consisted of woven webbing slung between a frame of steam-bent birch. Here's what he came up with: 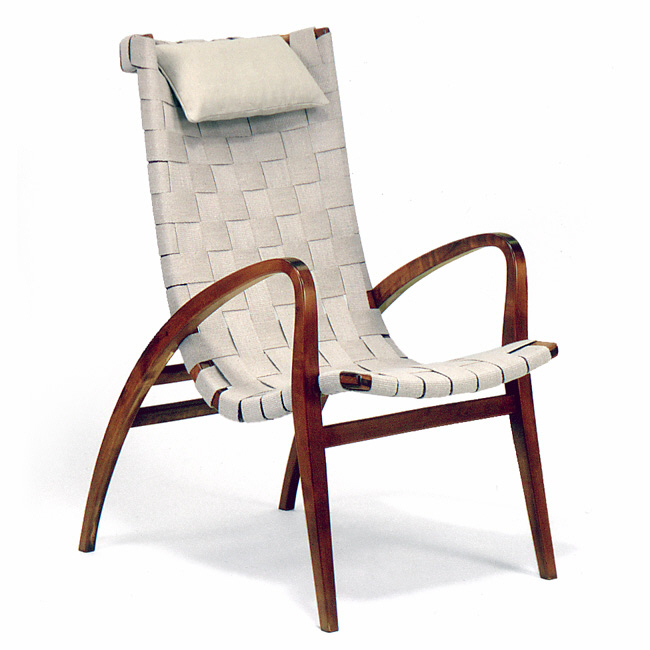 Mathsson was ahead of his time; it's difficult to convey how unorthodox and shocking this chair must have seemed in 1930. The hospital staff reportedly found it so ugly that they put them into storage, derisively referring to the chair as "The Grasshopper," and stuck with their traditional furniture. But it is here that Mathsson started developing a line of chairs that would eventually evolve into the Pernilla. 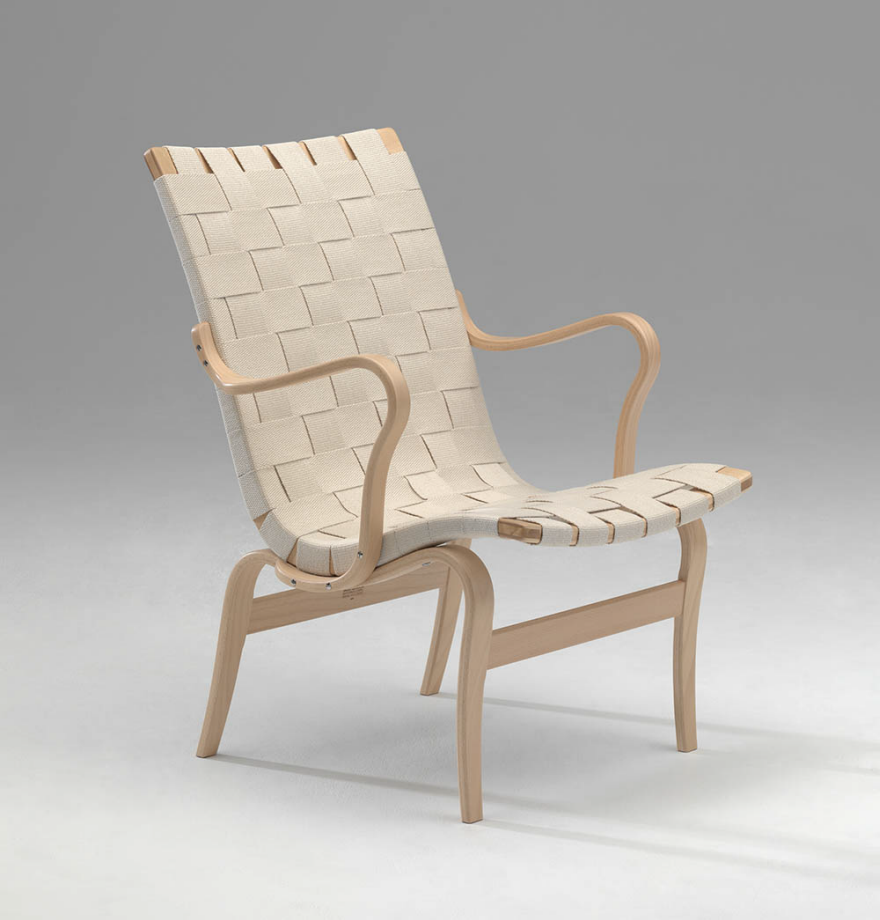 A considerably more complex design than the "grasshopper," the chair was startlingly organic. The year prior, Alvar Aalto had designed the Armchair 41 and Armchair 42, below, which also made use of wood that had been steam-bent and laminated into strips:

In my opinion, Mathsson's technical prowess exceeded Aalto's here, with the Eva's complex curves certainly being more difficult to produce: 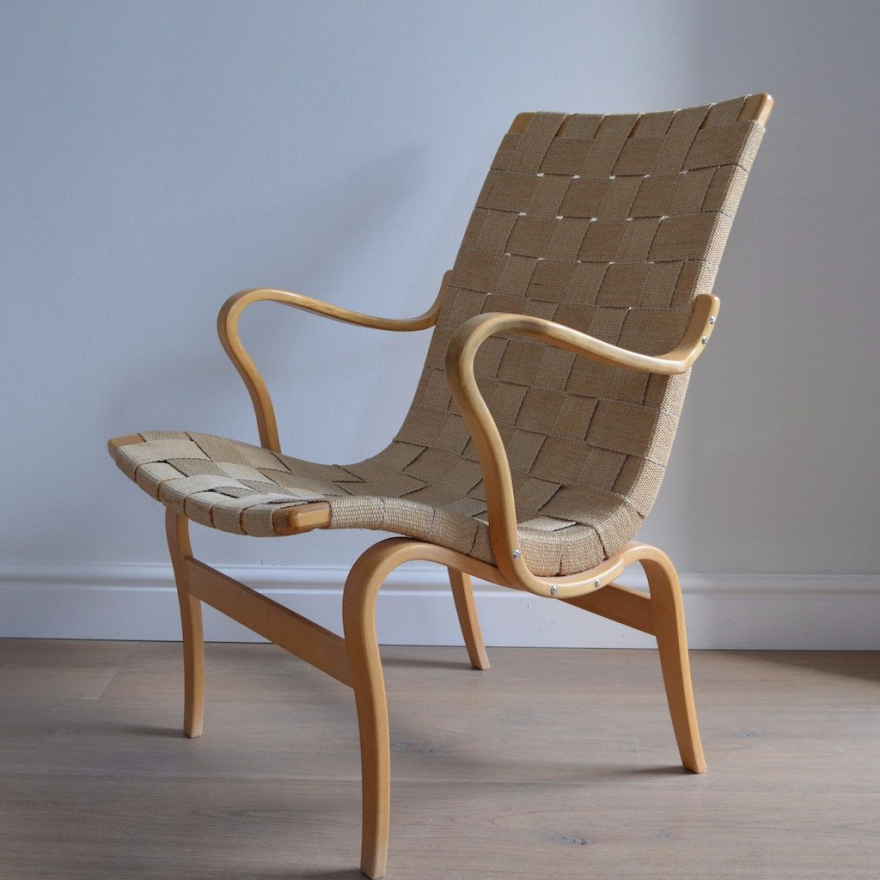 In 1941, Mathsson revised the chair with an ergonomic improvement, increasing the chairback's height and adding a headrest: 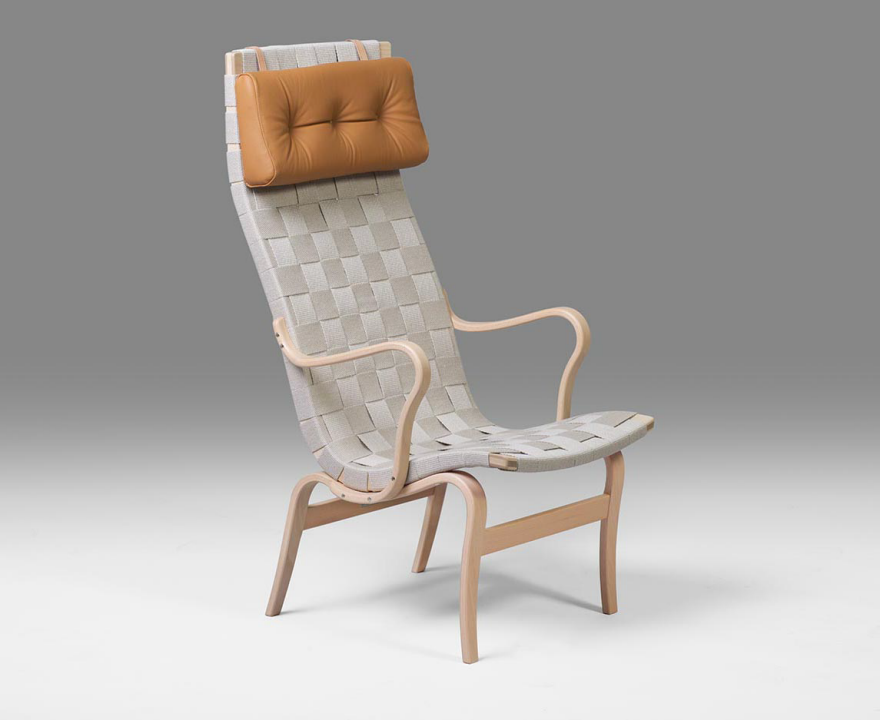 As with its previous iteration, the chair used bentwood for the arms and legs, but the seat frame itself was carved from solid pieces of beech. 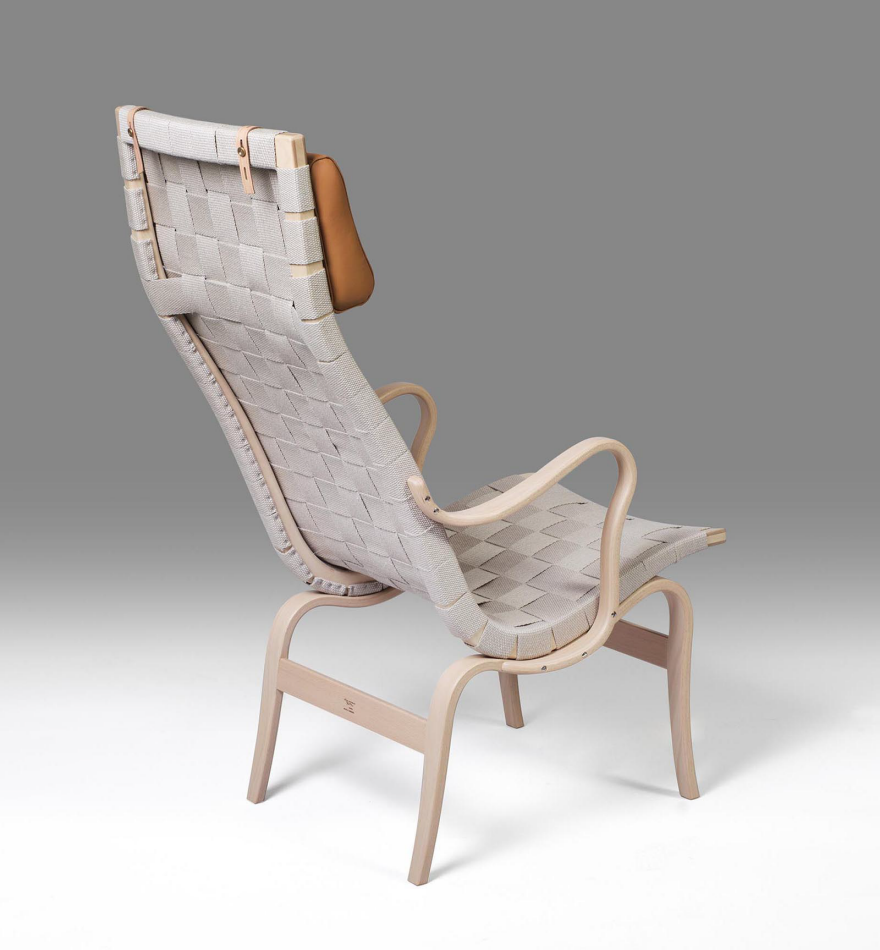 The same year he also designed an easy chair variant (later renamed the Miranda). This chair had a lower angle for the seatback, and Mathsson designed the chair with a companion footstool. You can also see here that he's experimenting with a waterfall front for the seat: 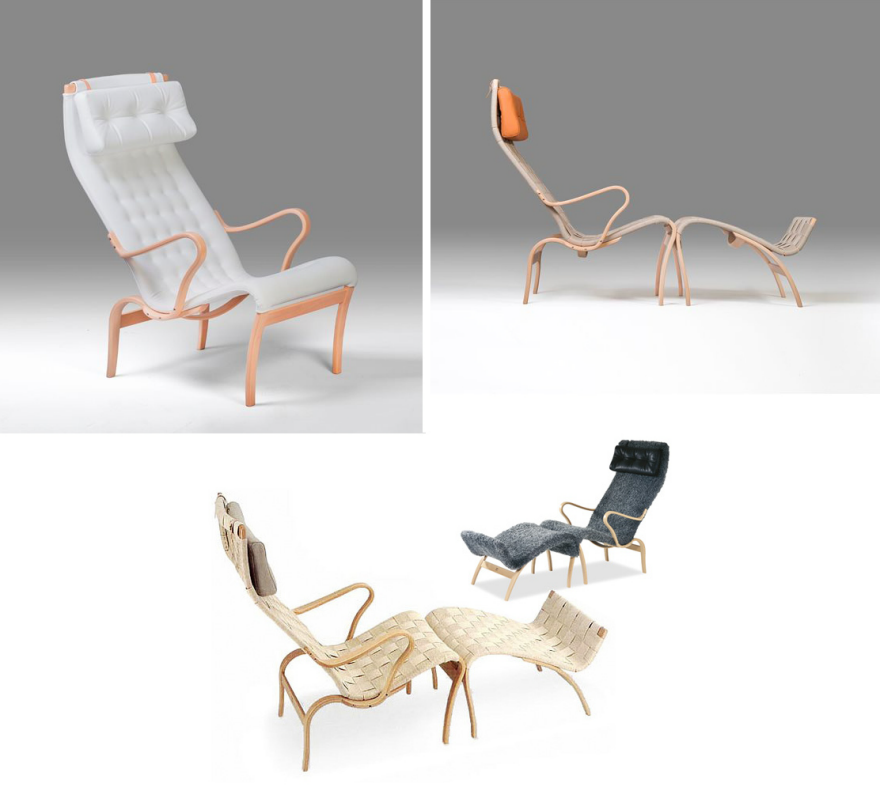 Still tweaking the design, in 1944 he created the first of what would later be called the Pernilla line of chairs. It was similar to the Miranda, but here Mathsson discarded the waterfall-style front, instead having the chair terminate in the manner of a ramp. He also moved the sitter's center of gravity lower to the ground. 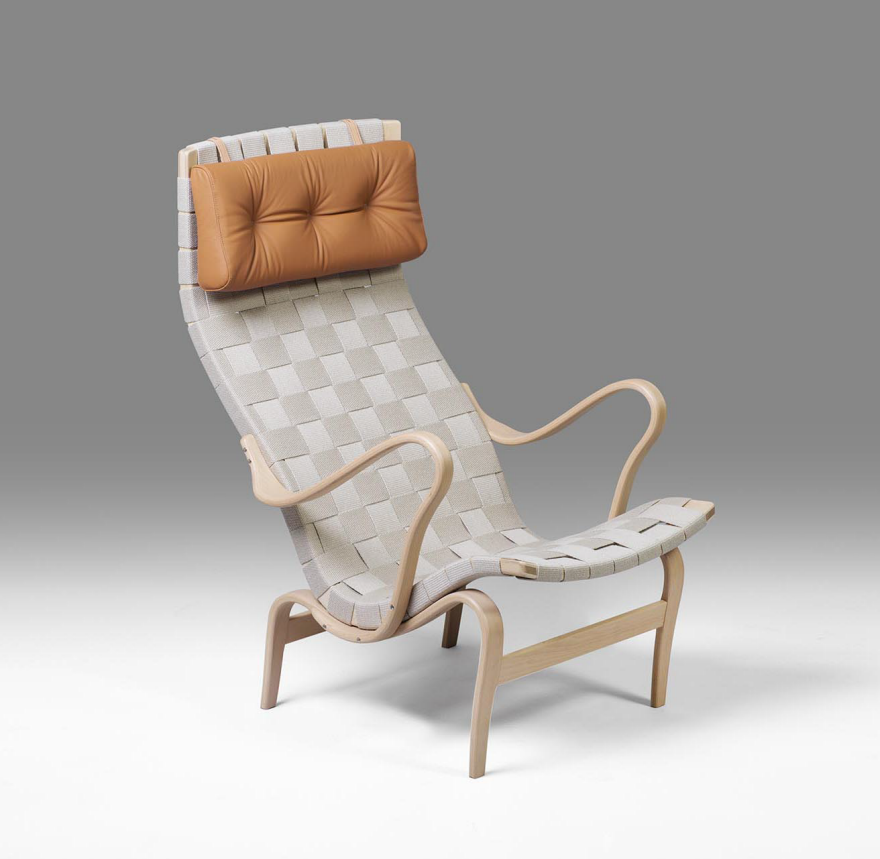 As with the Miranda, the Pernilla also had a companion footstool. 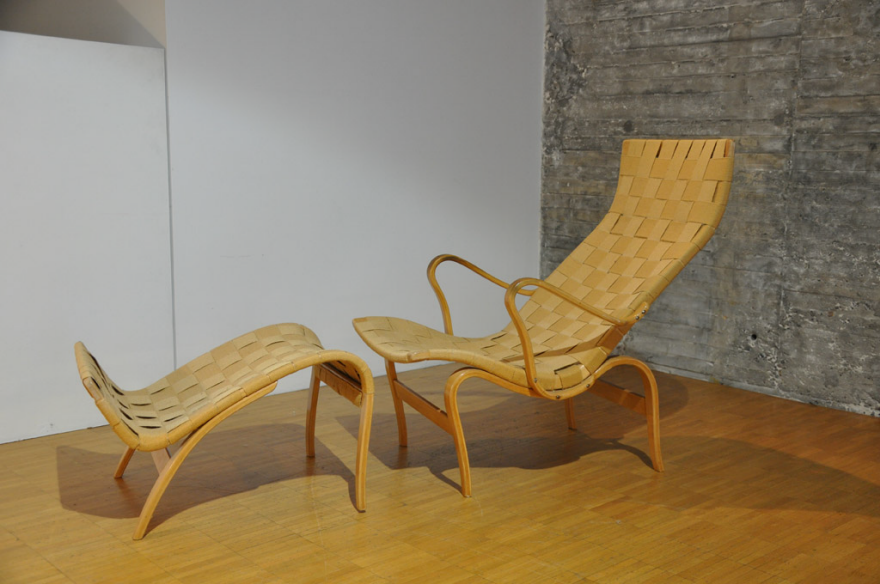 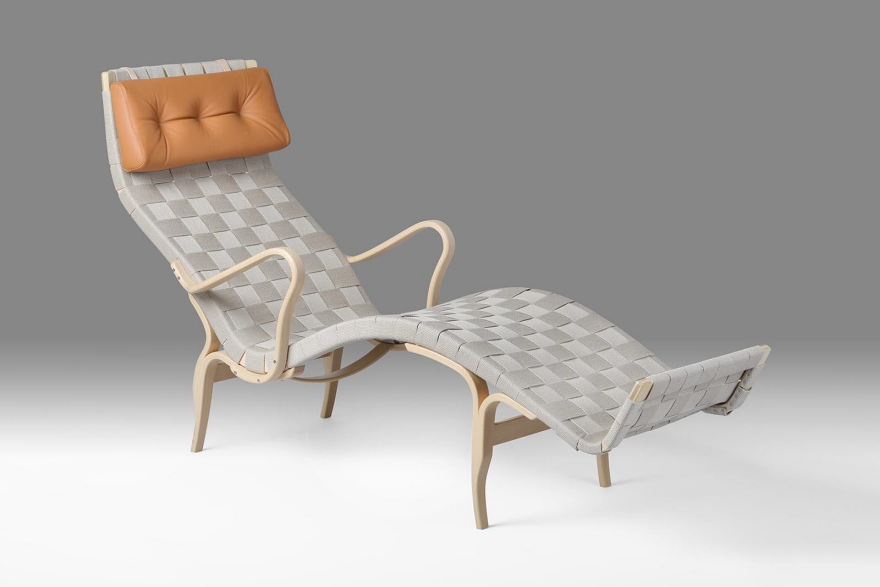 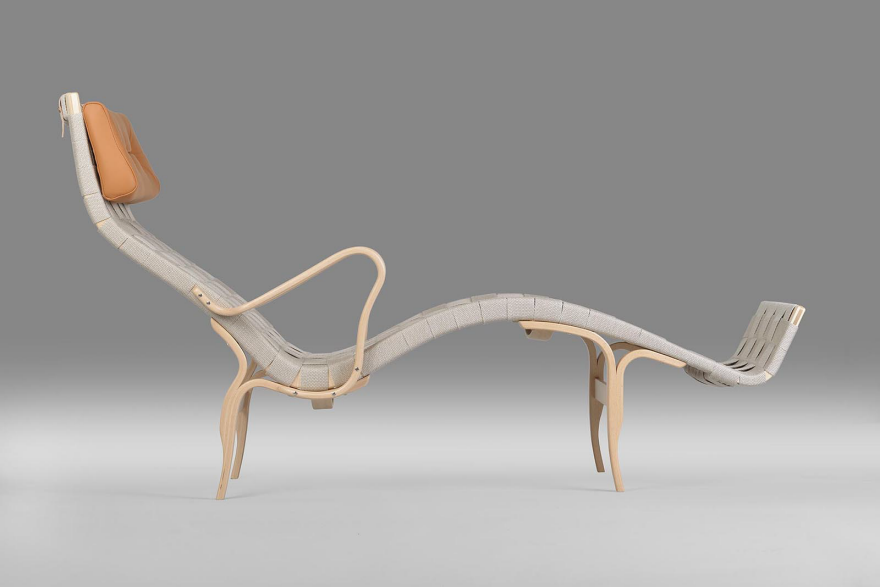 The architecture of this chair is significantly more complex. Note the transitions where multiple bent pieces split apart into different directions and the tapering of the feet, which does not appear in any of the previous chairs' designs. 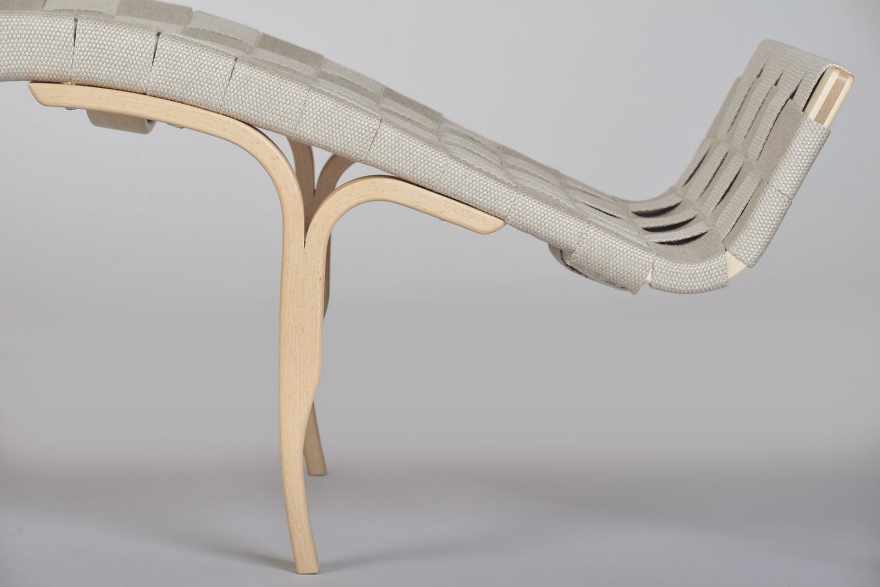 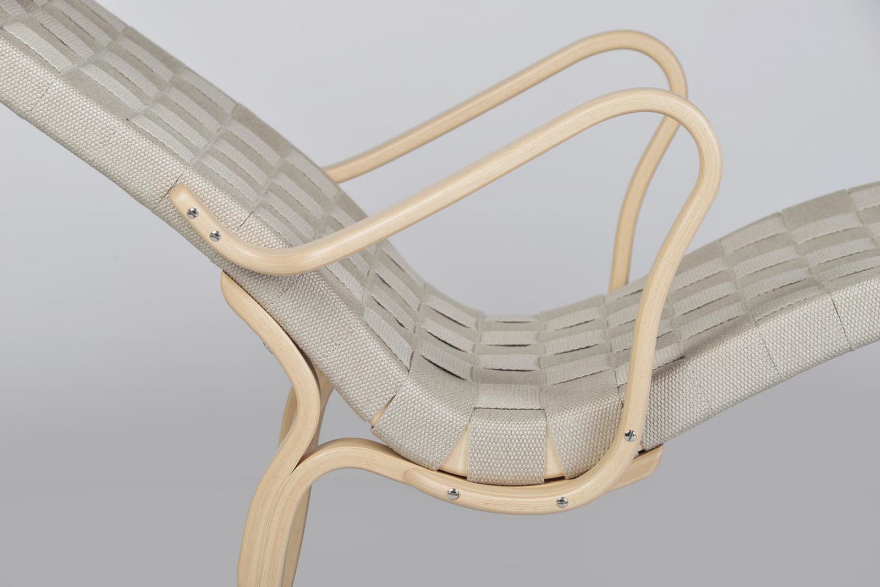 Finally we arrive at the Pernilla 69 that Mid Century Mobler showed us. In the 1950s Mathsson had shifted away from furniture to focus on architecture, but in the 1960s he returned to the genre, collaborating with Swedish manufacturer Dux, who was interested in bringing the Pernilla back. They released the Pernilla 69, upholstered in more modern leather, in 1969. 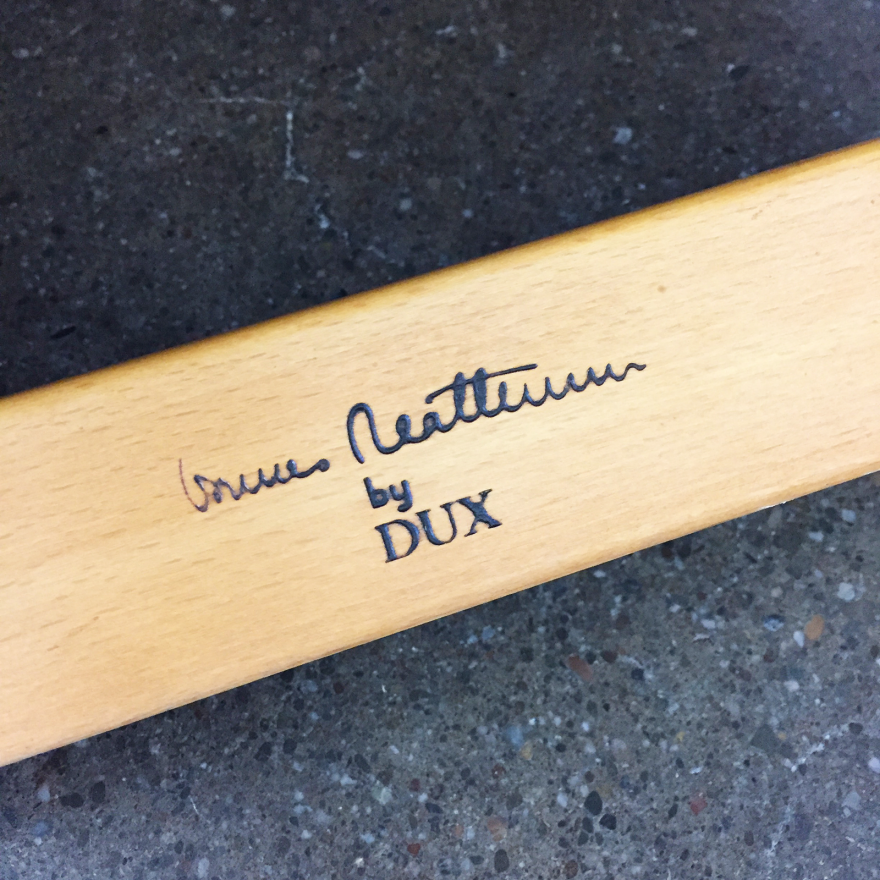 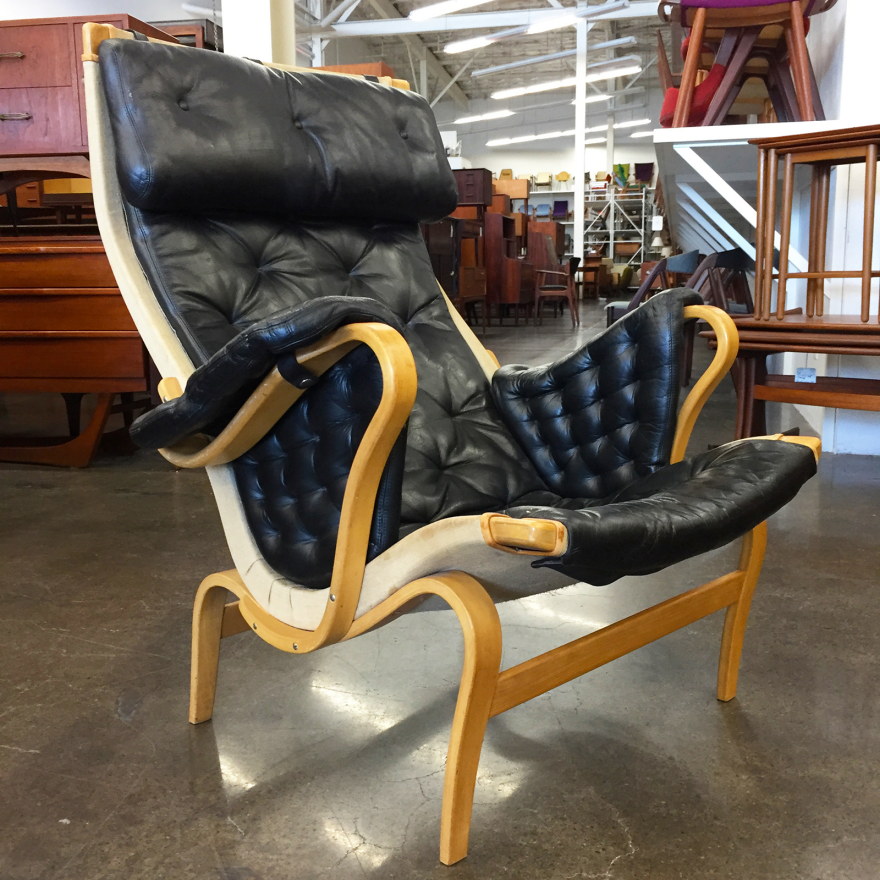 The Pernilla chair, which is regarded as a classic by furniture lovers (if not as well-known as chairs by Mathsson's contemporaries) is significant in that it embodies the evolution of Mathsson's constant quest for better ergonomics. Mathsson was also an early proponent of bentwood craftsmanship and his mastery of the technique shows in the chair's form. Lastly, how many chairs do you know of whose form was partially created in a snowbank?

[A final note: There is some confusion with terminology where the Pernilla chair is concerned. Bruno Mathsson International alternately refers to the easy chair variant as the "Pernilla" and "Pernilla 2," without explanation nor distinction, whilst referring to the chaise longue variant as the "Pernilla 3." Swedish manufacturer Dux, who licenses the version of the chair re-released in 1969, calls theirs the "Pernilla 69." Others simply use "Pernilla" as a catch-all to refer to all three chairs. As far as we can tell, only the chaise longue is different from the others.]