You're the new speculative testing ground.

Discursive design responds to things happening in the world, and in certain modes designers can speculate in order to provoke conversation about social, economic, political, technological, and environmental issues. This can also be the goal of contemporary and conceptual art, of course.

The art/design distinction is blurry, inconsequential in circumstances, and has long been debated without broad and firm resolution. Is the distinction based on: historic precedence; notions of utility; the relationship to the "everyday"; self- vs. other-centeredness; the education/training of the creator, what the creator calls herself, what experts say, or what the audience says? In a conversation with Paula Antonelli, she told us that she, as a curator,  takes the word of the creator:

While we are not particularly concerned with answering the question (indeed it is likely a bad question, in the sense of answer-ability) we invite readers to think through the complexity of the issue and its relevance to the production and consumption of their own work. As Antonelli suggests, this "very healthy ambiguity" is one which a current project, #exstrange, brings forth.

#exstrange is a new eBay venture that hopes to engage creators (& others) in a dialogue about contemporary consumer culture itself. It is a curatorial project by artist and writer Rebekah Modrak and curator and writer Marialaura Ghidini that invites a global group of designers, artists, and curators to use and subvert the design and linguistic conventions of the online auction, presenting designed objects and services that hover between consumer and creative cultures. eBay is no longer solely a vehicle for capitalism. The project launched in January 2017 and, since then, at least one new auction-as-intervention has been posted every day.

As material agents, designers and artists can push the boundaries of what it means to be a consumer and a producer in a global economy. The curators propose that we can use our systems of commerce and reframe our relationships if we allow ourselves to think differently. Indeed this is already (naturally) beginning to happen to some extent as we shift from a product-to-service economy.

In addition to this meta-discourse for the project as a whole, #exstrange presents individual works that hope to engage people around topics such as identity and gender, political differences, product ergonomics, service design, and information privacy and the intimacy of data. 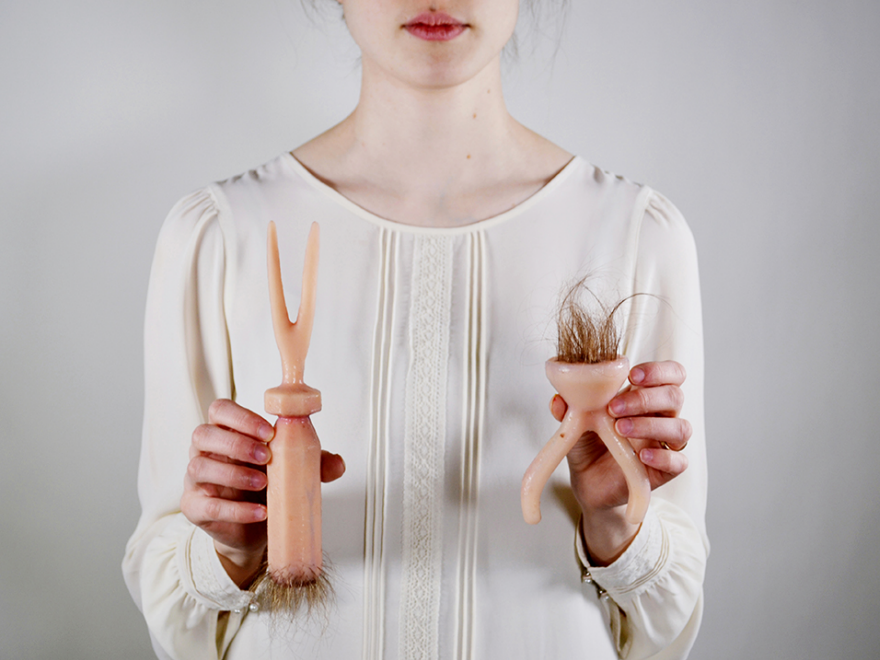 Gender Tools for Everything by Mia Cinelli: speculative products probe the relationship between gender and identity 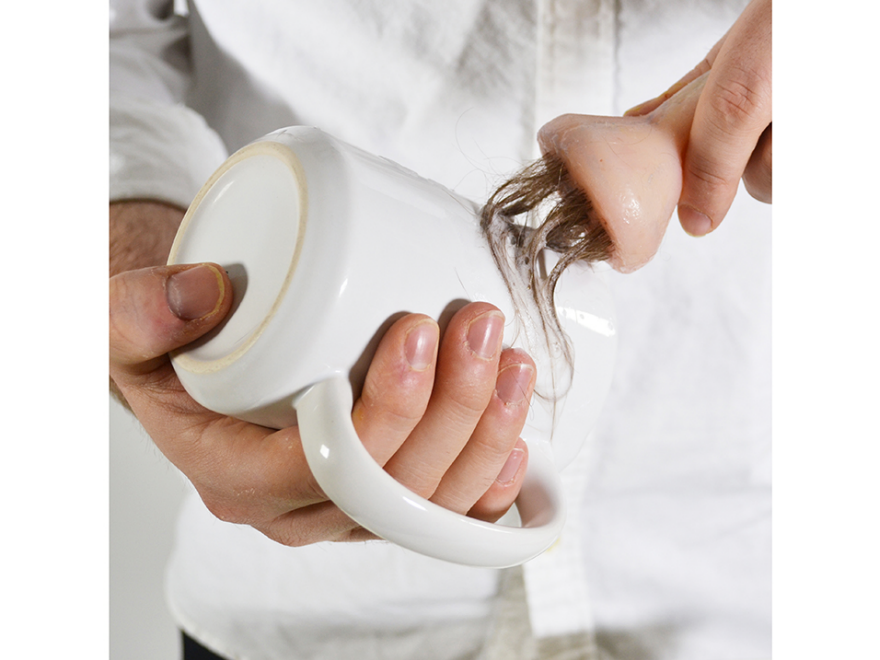 Gender Tools for Everything by Mia Cinelli

Gender Tools for Everything are speculative products by designer Mia Cinelli, who proposes a new aesthetic defying characterization by gender. "Too often, gender is tied explicitly to sex, reinforcing the incorrect binarism that one's body determines one's male or female identity. Our bodies enable us to accomplish tasks as complex, fleshy tools. After researching and identifying gendered tools and design aesthetics, I designed The Gender Tool to question the role of our anatomy in determining our endeavors. Borrowing the visual language of hardware, kitchenware, sex toys, and extremities props, The Gender Tool is disturbing and comical. It is an artifact which appears at first to have a specific designed function, but is revealed to be something else entirely. Its ambiguous, human form enables it to be free of gendered tasks— simultaneously making it entirely practical, although perhaps useless." 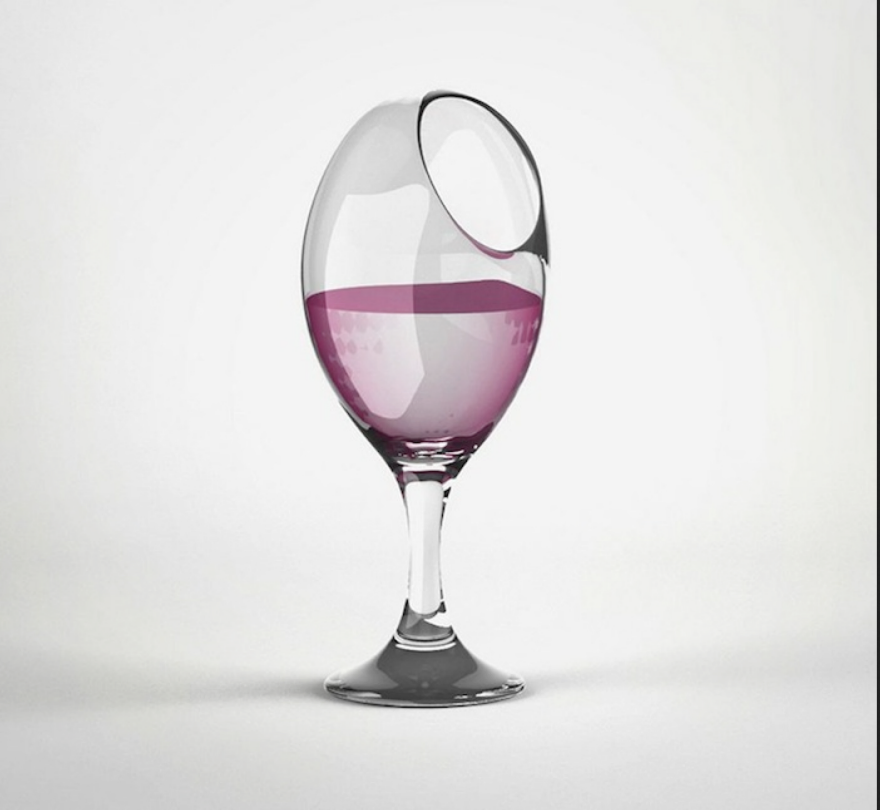 Uncomfortable Wine Glass by designer Katerina Kamprani's provokes conversation about ergonomics and utility. It's impossible to look at this designed object without mentally walking through the process of resting a glass against your lips, recalling the angle needed to tilt the stem, and appreciating the open space granted for your nose. Kamprani's impossible designs bring a mindfulness to the peculiarities of our bodies that we overlook with any ergonomically designed vessel/object. She reminds us that the actions and objects to which we've become accustomed, work well for good reasons and, because she's challenged those reasons, allows us to entertain the possibility that they could work better. Encountering Kamprani's igloo-like cup on eBay allows you to imagine that the experience of drinking could allow us to focus on the smell of the wine instead of seeing the glass as simply restricting the intake of fluid. 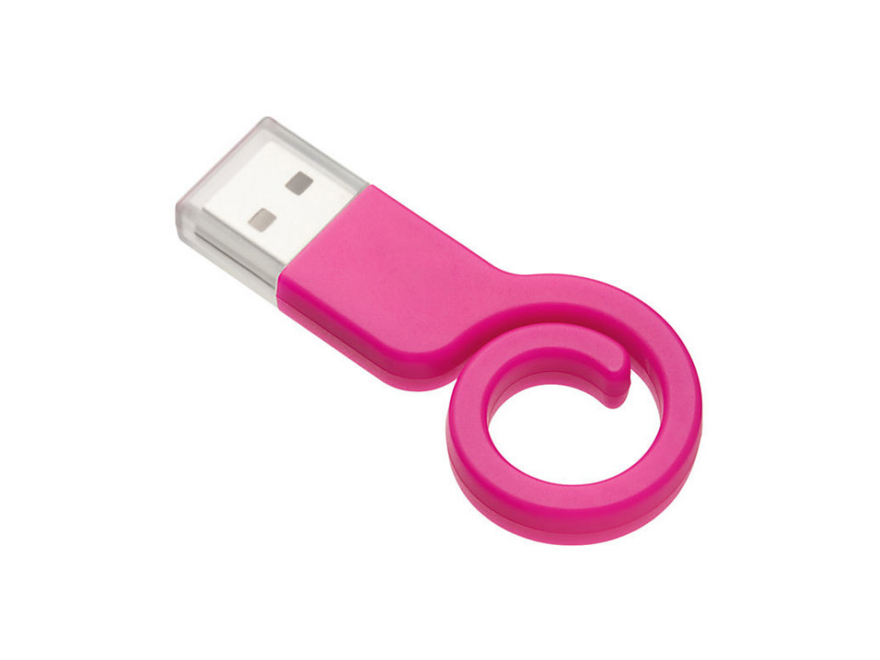 Archive Fever Vol. 37: My Browser History is an ongoing project that investigates data economy, data intimacy, and information privacy. You can purchase the internet browsing history of its creator on eBay. "Since September 2011, I have downloaded and stored (this) data. Each time Archive Fever is exhibited, I retrieve the most recent volume (of my browsing history) and play it back. Link after link, the digital traces I have unintentionally left behind while browsing the Internet reveal a loose, unedited narrative of my work, play, and personal online interactions."

Archive Fever is particularly timely as our own government is currently awaiting presidential approval on proposed legislation to repeal internet privacy protection.

"If Trump signs the resolution to eliminate privacy rules, ISP's (internet service providers) won't have to seek customer approval before sharing their browsing histories and other private information with advertisers."

Designers can respond to political acts through subversion. And in this case, Cards Against Humanity creator, Max Temkin, is threatening to buy and expose US Congress members' browsing history.

#exstrange is about accessibility, encouraging designers to share ideas with a mainstream audience, without the gatekeeping of competitions, labs, showrooms, or corporations. Instead of seeing eBay as the final stage of interaction with objects and the site of consumption or nostalgia, #exstrange sees the online marketplace as a speculative testing ground.

Interested in infiltrating eBay yourself? The curators tell us there are no barriers to participating. You can join the show anytime by placing #exstrange as the final word of your auction title, and you can find information about joining www.exstrange.com on the site under JOIN. Interested in encountering a speculative object on eBay or beyond? The #exstrange site shows live auctions on its homepage and archives every auction online. All works will be presented in the #exstrange book, published in June 2017 with essays by Mark Dery, Rob Walker, and other writers and design critics.