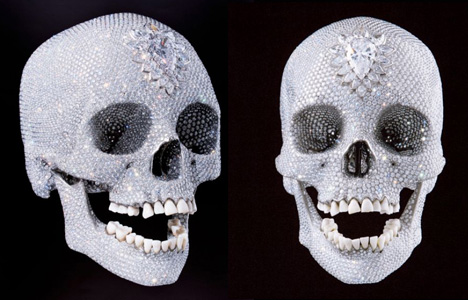 Perpetual provocateur Damien Hirst unveiled his latest masterpiece this week--a 19th century human skull cast in platinum and encrusted with 8601 diamonds (weighing in at over 1100 carats, but who's counting?). Titled "For the Love of God," the piece is priced at $100 million, which, if sold, would be the highest price ever paid for a contemporary artwork. London-area jewel junkies can worship the sparkling skull in person--it's a part of Hirst's current exhibition (June 1 - July 7, 2007), "Beyond Belief," at the White Cube.