It's a complicated but exciting time to talk marijuana in America. The medically invaluable and minimally harmful drug is fast becoming a socially normalized staple crop. But for folks in states where progressive values and massive tax income are less important than ineffective and racist drug policy, the idea of buying a scheduled substance so openly can feel mysterious and complicated. In part it is, but dispensaries are using design to fix that.

Cannabis stores in legalized states are at the crossroads of innovative retail and shifting legal constraints, and how they work IRL is fascinating. To get a sample of where the visionary edge of the industry is headed I toured Farma and Serra, two of the most cutting edge dispensaries in green-obsessed Oregon, to interview their buyers and budtenders. Farma was founded by cannabis researchers with an eye towards consumer education. Serra (Italian for "greenhouse" but rumored to be a reference to sculptor Richard Serra) was opened with an aim to bring cannabis to the more sensual and modern lifestyle. 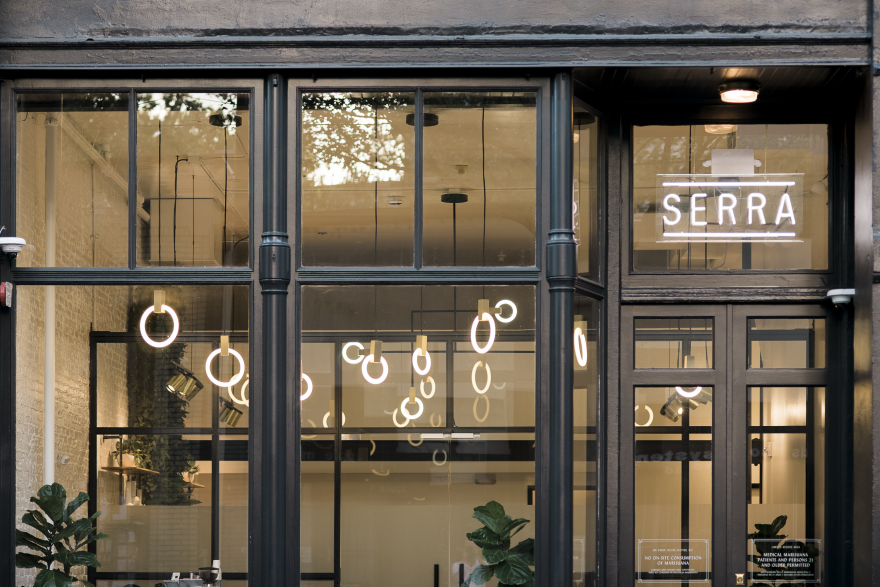 Let's start with a standard tour. When arriving outside a modern dispensary you'll usually be met with tasteful signage and frosted glass windows, or a peek into a chic waiting room. This is because some jurisdictions disallow direct view into the sales floor, much like sex toy shops or strip clubs. Similarly it can double as security for the shops themselves - cannabis is not cheap merchandise. 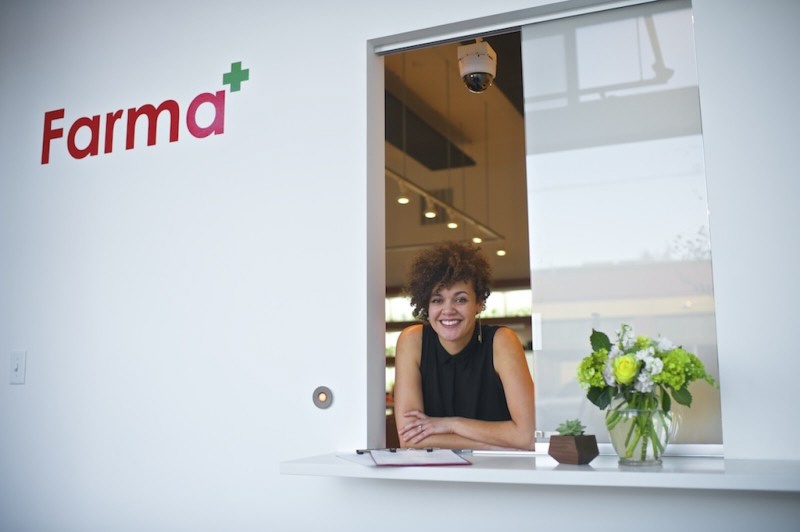 On entering a shopper will often be greeted by a front facing attendant who checks your ID for age, and might direct you to wait for a few moments. This is to manage the number of shoppers to salespeople - usually referred to as "budtenders" - to meet a legally required balance. While it might be mandated for security purposes, the high ratio of staff to shoppers also makes for ready access to product and information.

At this point the experience diverges a bit by each shop's ethos, but certain trends are already blooming. It's not common to see many symbols of traditional stoner culture - you'll find more attractive tilework and exposed brick than blacklight posters, and the color green and cannabis imagery are played down. You will however find clearly labeled and presented examples of the merchandise, be it flowers, oil, cartridges, concentrates, or edibles. Each shop tends to specialize in a particular category or a brand-tailored selection. 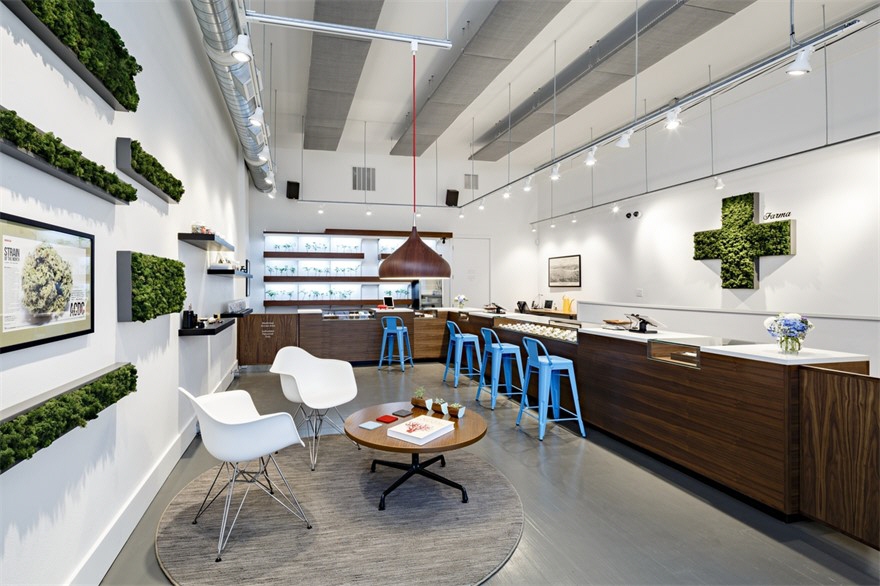 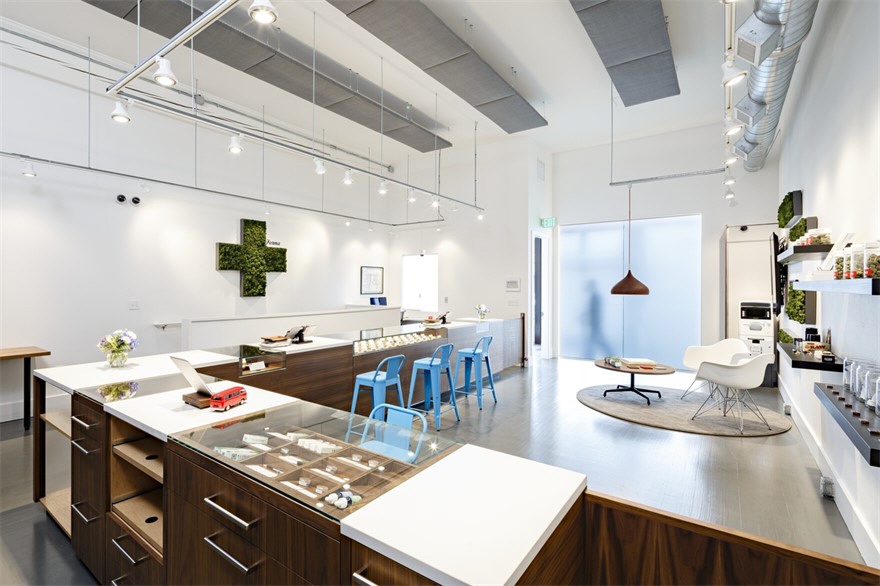 Farma, looking back toward lobby 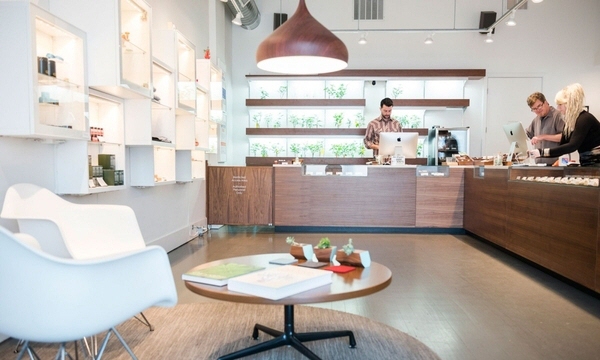 Farma for example prides itself on an exhaustive and deeply researched array of flower. Serra offers a more curated range, with an eye for experiential categories. Whatever the focus, each store usually has an internal method for communicating the "type" of high or range of experiences each offering can confer. There are often visual scales showing how intense the effects will be cerebrally or physically. This leads to the second important trend. 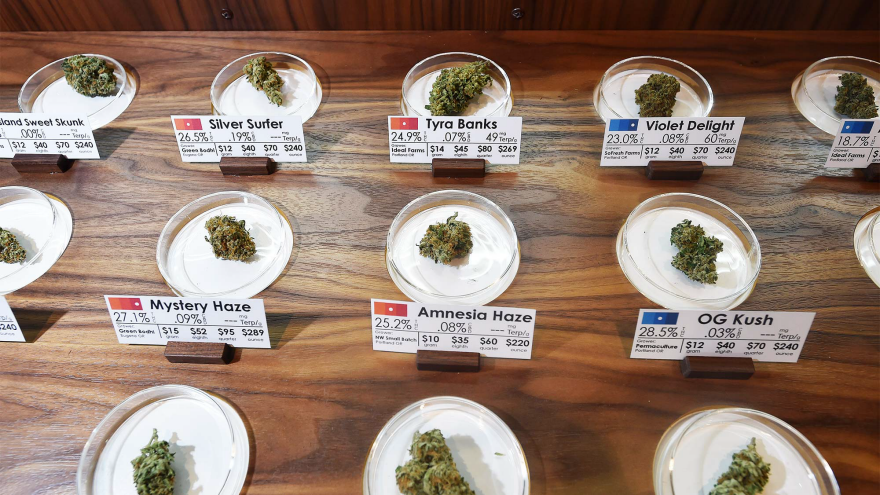 Budtenders are crucial to the modern dispensary. You can treat it like a liquor store - order by brand name and get out - but you shouldn't. All cannabis sold is tested by the state to ensure it is safe for consumption, and this usually includes a chemical breakdown of the active elements (the different cannabinoids and terpenes) in each strain. But because research linking strain chemistry to user experience is still nascent, the chemical fact sheet can only say so much about what users can expect. At shops like Farma, that fact sheet is both part of the buying process and part of the staff's research work well before it hits the shelves. They collect multiple user accounts from within the team, comparing their different dispositions and outcomes and triangulating with the vendor information.

Pairing the concrete testing information with a range of subjective experiences allows the budtenders to make exacting buyer-specific recommendations. Some users struggle with pain, anxiety, insomnia, low THC tolerance, or not laughing at stupid cartoons enough. Knowing first-hand how each strain may interact with personal factors is vital in making helpful suggestions for customers.

Ben Frothingham, a budtender ("and some other things") at Farma describes the small team's genuinely excitement about triangulating official research and crowd-sourced industry data. "The impact of better information on people's lives is incredible. [Budtending] can be treated casually, but helping people make better decisions about their bodies is amazing." 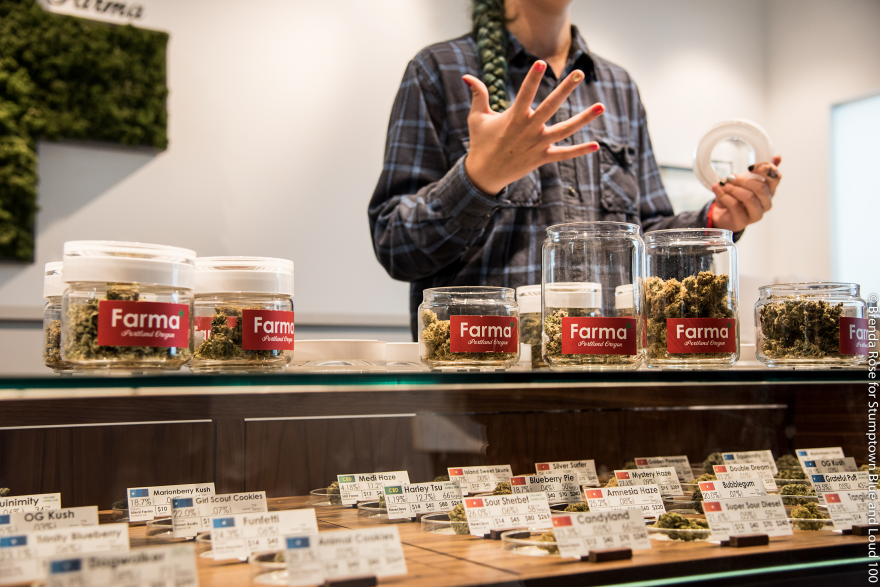 If this sounds more complicated than the old Indica-vs.-Sativa, upper-vs.-downer way of describing weed experiences, it is. Every cannabis professional I talked to described the incredible value of working with customers directly, as a chance to explain how much broader the range of possible experiences really is. A seasoned budtender at Serra (called 'docents' in house) noted that convincing shoppers to consider other factors than THC content per dollar results in some of the biggest improvements in user experience. Getting high isn't a single line spectrum from sober to fucked up, it's a three-dimensional map, like wine or whisky if those could also alleviate multiple sclerosis symptoms. 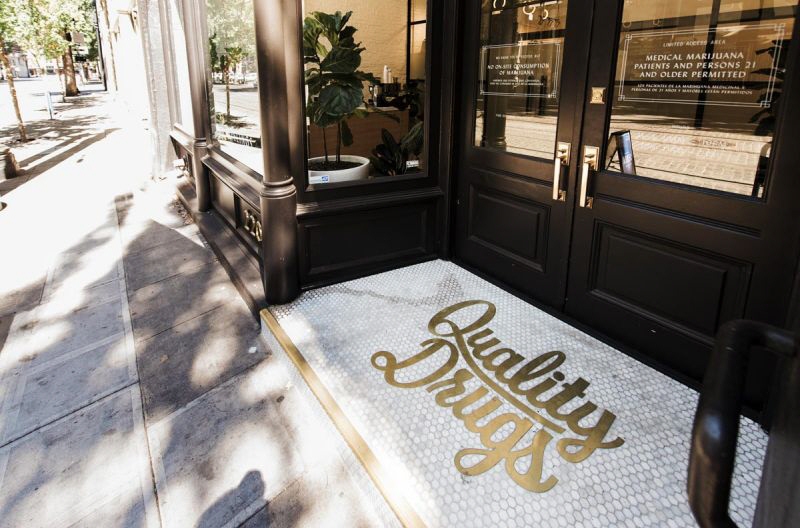 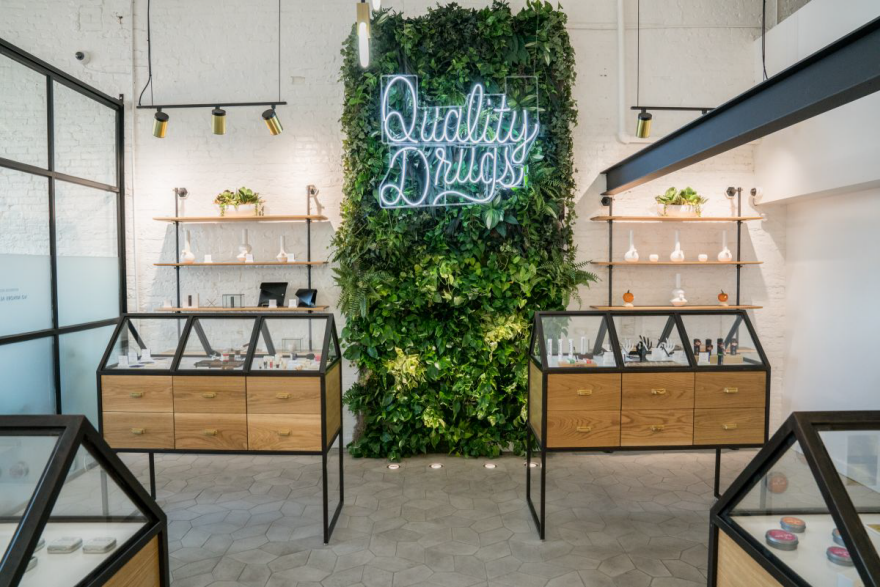 Because of this, budtenders are a cross between research librarians and boutique attendants - they're equally ready to give you a closer look at a sample or to break down common side effects if you're the paranoid type.

The third macro trend in cannabis retail and design is pushing the sales and use experiences to reflect the breadth of options already present. Rather than emphasizing strain name or chemical breakdown alone, dispensaries are starting to break strains out by the general field of experience they fit into. Not everyone wants to dig into the science, but they deserve to have clearly delineated options for "invigorating and not distracting" or "plaster me to the couch." 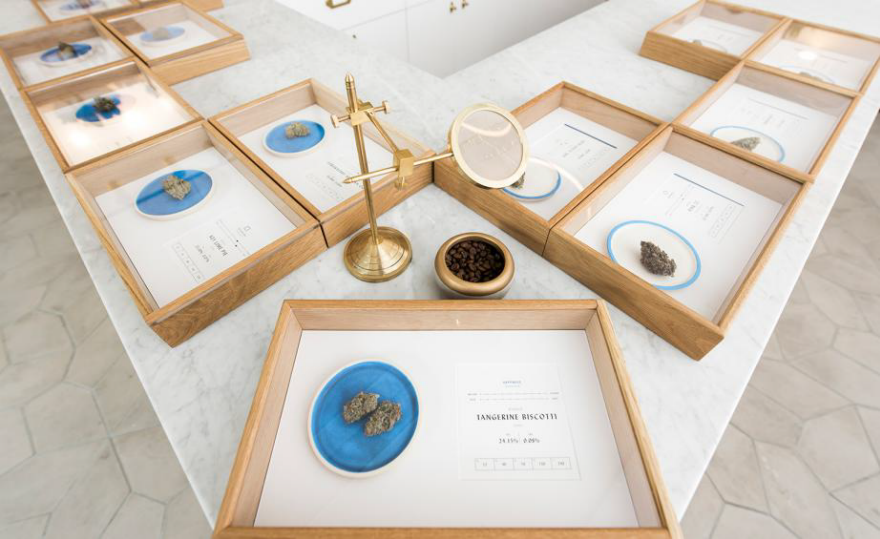 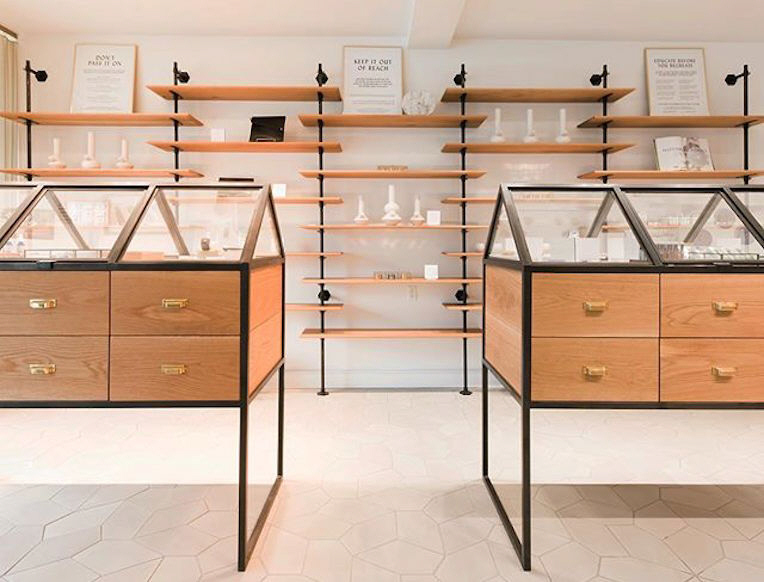 While trying to class up the appeal of weed, shops like Serra maintain a tactile and cheery attitude about the stuff. Their store isorganized to help shoppers peruse by vibe, with standalone tables full of beautifully arranged product and accessories, a far cry from the sterile glass cases of more traditional dispensaries. Letting shoppers interact with product without having to ask is a great shift in hierarchy in an industry traditionally run on insider knowledge and secrecy. Serra highlights their categories through the full product line, offering options like locally made co-branded chocolates that feature their curated cannabis blends. 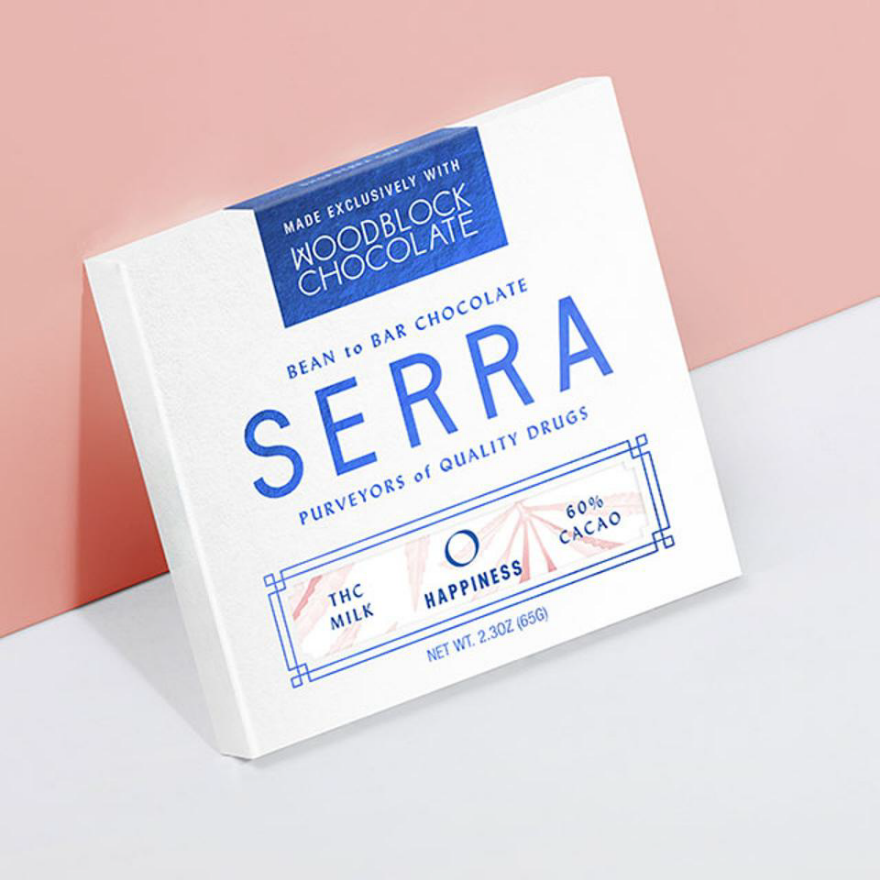 The docent I met with also waxed poetic about the sculptural ceramics and accessory design coming out of the woodwork now that in-state sales are legal. Serra has previously teamed up with designers like Ben Medansky to make design inspired pieces that look perfectly at home in trendy households. 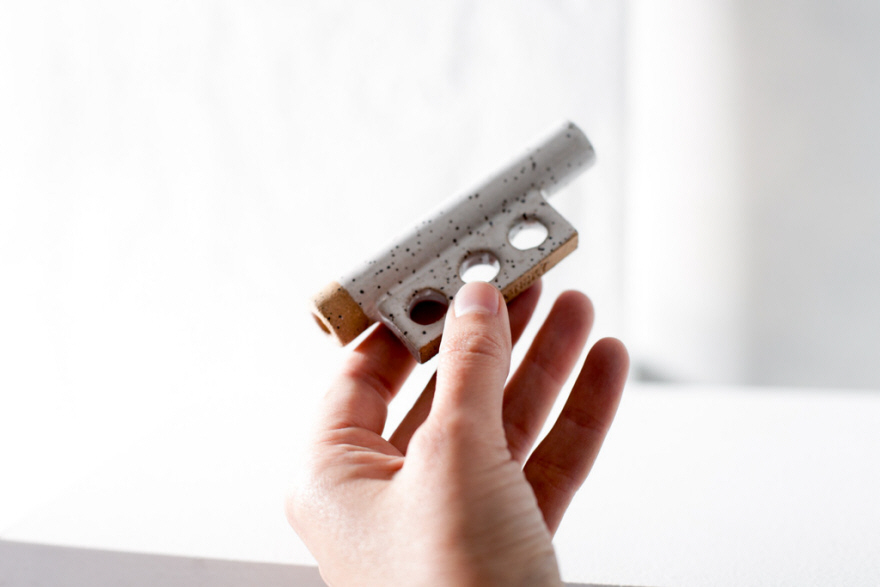 When it comes time to buy things get a little oldschool again. Some shops post pricing on boards like at the bar, others have tasteful menus like your favorite overly serious pop-up restaurant. In any case you just ask a budtender for the strain and amount you've decided on, and they leave to their vaults to get it. Thanks to The Man, credit card processing isn't a good idea, so get ready to use an on-site cash machine and pay by hand.

Once cash has been exchanged, you'll usually be holding an airtight container of product inside a larger child-proof bag. Swankier places might send you out the door with a cute gift bag. None of it is terribly low-key, but that's kind of the point. Shopping at a dispensary is a normal high-ticket shopping experience, with a few federal kinks thrown in. By blending the sterile authority of medical spaces with the friendliness of local boutiques, modern dispensaries are positioning themselves as welcoming gatekeepers for a previously off-limits culture.