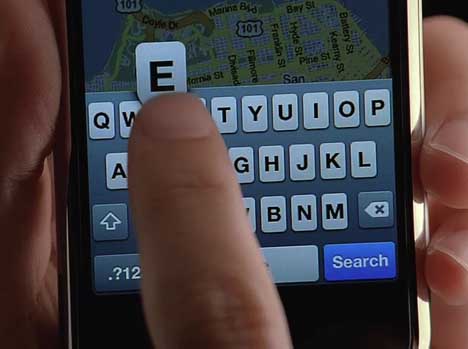 Last Wednesday's article in The New York Times' Business Day section brought us this exposé: "That iPhone is missing a keyboard." Amid debate surrounding Apple's awaited release are questions as to whether the elimination of a mechanical keyboard in favor of a touch screen will cause the iPhone to revolutionize interface technology or fall flat. Bill Moggeridge of IDEO is quoted saying, "The tactile feedback of a mechanical keyboard is a pretty important aspect of human interaction--if you take that away, you tend to be very insecure." With respect to Mr. Moggeridge--and I hope to remain employable--I would encourage him and those who hold like-minded opinions to get out of the office more often.

Anyone who's had sex or owned a pet, and has done either with a modicum of success, knows how to push the right button without a mechanical keyboard. (For those less successful, the secret usually lies in a repetitive, caressing gesture.) These are ancient human instincts and basic tactile behavior. Sure there's insecurity at first--and I've known my share--but with practice, patience, and care all manner of feedback is possible. And what and where is tactile feedback anyway? A click feeling at the fingertip? Or a sight or sound cognitively and emotionally registered? All of this begs the question, "what is a keyboard and how should we use it?" As technology advances, I say let's get back to our roots: less clicking and poking, and more petting and stroking. So what is a keyboard? To my mind a keyboard, whether mechanical or non-mechanical, is ostensibly a map. By entering particular coordinates in a sequence, one creates meaning. That meaning can come in the form of text from the QWERTY keyboard, or in the form of music from the piano keyboard. A numbered dance step mapped out on the floor (without which many dancers seem secure) is a non-mechanical keyboard of sorts, creating emotional and sensual meaning from movement. The oldest, non-mechanical map for pushing buttons that I can think of is laid out on the Chinese acupuncture chart.

Acupuncturist Katherine Echo Kim says that the points and meridians on the chart are useful for learning at first and may be consulted for reference, but successful communication with a patient's body comes from intuition and feedback. "You feel the tissue and the muscles move, and listen to the sound of the patient." Oooh. . . yeah. . . OW! "Feedback comes from sensitivity and listening. It's a learning process." Successfully needling someone's buttons becomes a learned act of intuition and the original map can be forgotten. Interestingly, on the subject of poking vs. stroking keyboards, Ms. Kim remarks that "finger tips contain the ends of meridians that extend into the core of the body," and how you use your finger tips can "effect other organs, emotions, and over all wellness." So there may be reason to believe that a gentle stroking gesture can make the user feel better too.

After all, isn't the delicate thumb petting that controls its scroll wheel part of what makes the iPod so cared for and coveted? "No doubt about it," says Eric Chan, President of Ecco Design in New York . "From when we were born, we want to touch and be touched with a natural gesture. Technology should be as natural as possible." Ecco Design's l'Finesse Personal Pond for Toyota/Lexus is an experiment in product control and feedback using fluid hand gestures. And guess what? No mechanical keyboard. The natural dance of hands that controls the Personal Pond is reminiscent of gestures required to play the Theremin, that obscure and early example of keyboardless technology. "So long as there is some strong and successful feedback," continues Mr. Chan," such as light or sound, we ought to pursue the effortless gesture."

So will Apple's new attempt at mechanical keyboardlessness result in insecurity among early adopters and disappointing sales? Or will gently touching and caressing a plastic screen provide enough tactile and visual feedback to make the iPhone as intimately coveted as the iPod? Faced with these important questions, one potential consumer responded on condition of anonymity, "Will it vibrate?"