Journalist Christopher Schwarz is something like the Indiana Jones of woodworking, uncovering valuable treasures from the past. In 2010 he was going through a book from 1678, Joseph Moxon's "The Mechanick Exercises"—widely thought to be the first book on woodworking published in English—when he came across the following illustration: 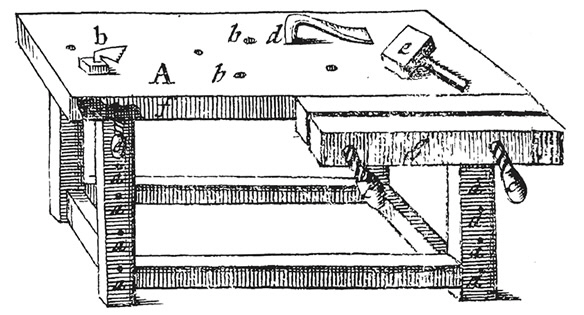 That's a dual-screw vise used by joiners of the period. Unlike a single-screw vise, the wide gap between the two screws allowed the craftsperson to hold wide boards in the jaws of the vise, to perform operations (like dovetailing) to the ends. In the accompanying text, Schwarz uncovered a reference to a permutation of the vise being a freestanding piece of equipment that could be clamped atop the workbench, rather than to the side of it.

This got him excited, as that design solves a common ergonomic problem amongst woodworkers. Conventional vises are mounted directly to the sides or ends of workbenches, as in the illustration, and are level with the benchtop. This means that when a craftsperson is attempting to cut dovetails, they must hunch down to the level of the benchtop, an activity that's hard on the back. Having a freestanding vise atop the workbench would elevate the work to a more ergonomically-comfortable height.

Schwarz built a prototype, writing up the process in an article for Popular Woodworking. "After a few revisions, here is what I came up with," he writes. 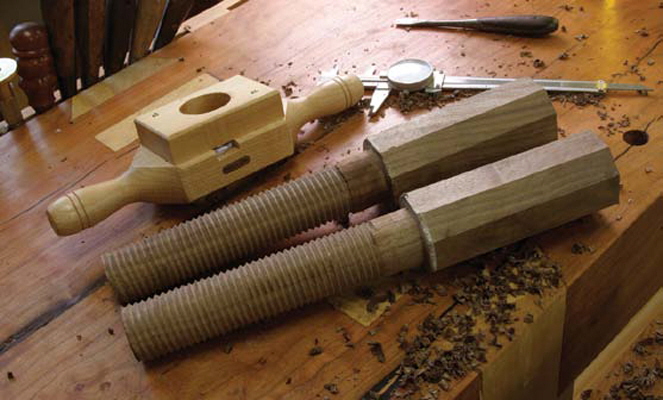 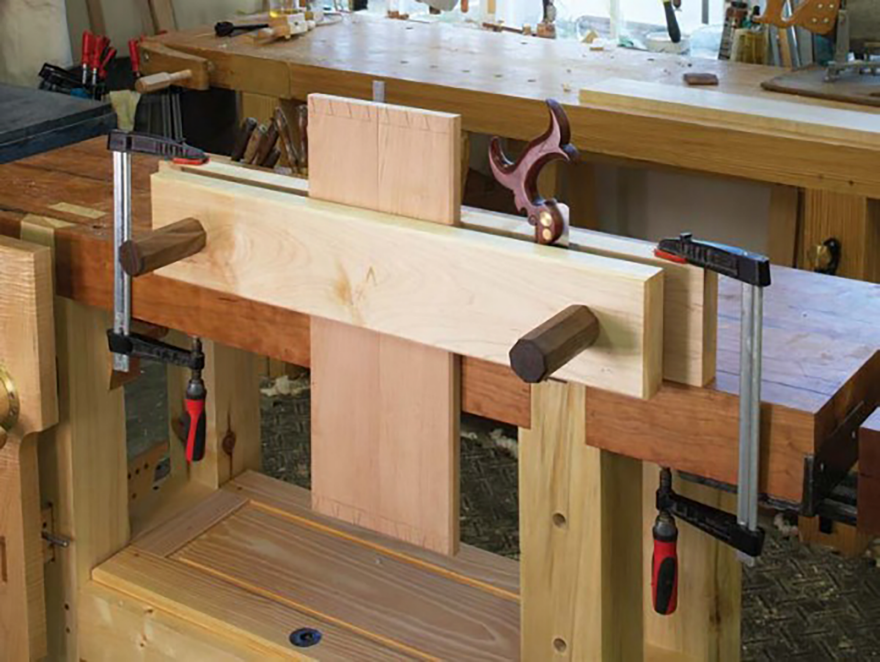 This vise solves a lot of problems that we joiners have. It allows you to hold stock of almost any size (mine holds up to 24-1/8"-wide material) with an incredible grip. More so, it raises your work above your benchtop surface. The vise as shown is 6" high, so the top edge of the vise is 39" from the floor.

The board I've clamped in the vise is 44" off the floor and is as stable as something clamped between two boulders. What does that mean? No more stooping to saw dovetails, tenons or other joinery.

And because the vise is portable, that means I can:
1. Put the vise wherever I want on the bench – the end, the back edge, wherever.
2. Remove it when I don't need it and hang it on the wall – most woodworkers don't need a twin-screw vise every day.
3. Leave it unclamped on the benchtop, and use it like a giant handscrew clamp (Peter Follansbee hipped me to this function).

The vise is quite easy to build – I used some scraps. The only other key piece of shop equipment is an 1-1/2" wooden thread box and tap, which is available at many suppliers for less than $50.

After the article ran, the popularity of the vise exploded within the woodworking community, helped along by Schwarz's step-by-step instructions of how to DIY it. Although Joseph Moxon did not invent the device—there are references to the design in other texts from the time period—it is now colloquially referred to as a Moxon vise. (Or in Commonwealth countries, Moxon vice, since they spell "vice" as in "Miami.")

Here are some links you may find of interest:

1. Schwarz's original Popular Woodworking article with instructions on how to build the vise.

2. Joseph Moxon's "The Mechanick Exercises" is public domain and has been digitized by the University of Michigan. It is available for free download here.

Since World War II, traditional and effective hand skills have disappeared from the home, professional and school woodshops in North America.

Those quickly disappearing hand skills have been replaced by a reliance on machine work, even when it is less effective, slower or sloppier. The founders of Lost Art Press – Christopher Schwarz and John Hoffman – are trying to restore the balance between hand and machine work by unearthing the so-called "lost arts" of hand skills and explaining how they can be integrated with the machinery in the modern shop to help produce furniture that is crisp, well-proportioned, stout and quickly made.

Next up: Check out this very practical Moxon vise with modern-day design upgrades.