A short history of a specialty tool

Luthiers have a problem. When making a stringed instrument, the belly (front) and back need to be thin in the right places so that they will vibrate correctly, and thick and strong in other places so that string tension doesn't break the instrument. To do this they must carefully remove slivers of wood in very localized areas.

While scrapers are very useful, small, metal "violin makers planes" evolved at least as far back as the 16th century. In France, by the mid-18th century they had evolved to essentially the same form as the circa 1910 Preston violin-makers plane seen at the left of the photo below. 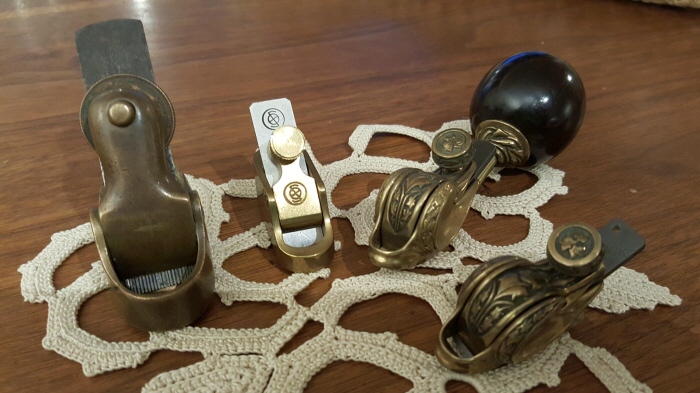 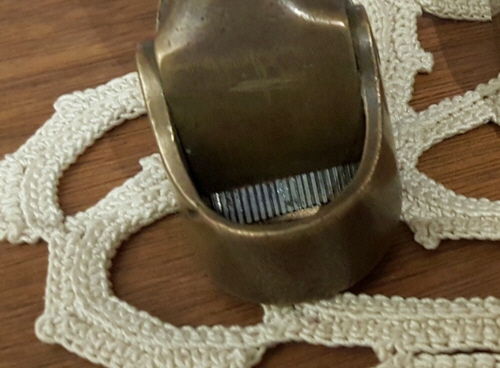 A close-up of the toothed iron in the Preston.

Available sizes listed in the 1909 Preston catalog ranged from 5/16" - 15/16" in either a flat or convex sole. Preston's planes were supplied with both a regular plane blade and a toothed blade. The latter blade significantly reduces the tearout you get when planing, and cannot always plane with the grain. Preston's offerings were similar to most British planemakers. Preston closed in 1932.

The second plane from the left was made by an English company named ESE. They made similarly styled planes in a full range of sizes. Machined from solid bronze, which negated the need for a fancy casting, the style is boxy but ESE planes worked well. ESE ceased production shortly after the turn of the 21st century.

The two planes on the right are by an American, Christopher Laarman. I had the privilege of stocking a few of his planes for the few years he made them (circa 1990's-2003). The highly sculptured bodies were investment cast and fit fingers perfectly. The irons, which are solid and thick were by Ron Hock. The sculptured bodies are a joy to hold, a joy to use, and a feast for the eye. His planes are treasured today. The larger of the two Laarman planes in the picture has a palm rest, which many people feel gives them even more control.

Luthiers also use small block planes, which are sometimes also called "violin planes". But the larger violin planes, (which are still pretty small) developed separately, with a different set of roots that also go back to the Renaissance. These larger block planes are the ancestors of the entire modern family of mitre, block, and bench planes.

There are a few makers of violin maker's planes around today. IBEX is probably the most well known although I haven't used one and don't have an opinion on if they are any good.

By the bye, I am calling their planes "violin maker's planes" rather than just the more common "violin planes" because that's how Preston listed them in their index. Also it's more pretentious. Either term is obviously correct. "Finger Plane" is another term that is used, but in my view, that term is more suited for the family of small boxwood planes that were used by cabinetmakers and casemakers, not by luthiers.