Bernhardt Design Gives Creatives Outside of the Industry a Chance

How a co-founder of Airbnb, a television star and a Grammy-nominated musician teamed up with the furniture company to debut collections at ICFF 2017

I was surprised to hear who was collaborating with the furniture company Bernhardt Design this year for their ICFF booth display, which is also perhaps precisely what intrigued me about it. On the first day of the fair, Airbnb co-founder Joe Gebbia, singer-songwriter Tift Merritt, and finally NFL linebacker-turned-Brooklyn Nine-Nine star Terry Crews, the "designers" collaborating with Bernhardt Design this year in conjunction with ICFF, were all there enthusiastically sitting at their respective booths to talk about the inspiration behind their collections (which for almost all of them was their first foray into designing anything).

The thread between all three that got them to that very spot that day, really, was President of Bernhardt Design Jerry Helling. "I've known Jerry for years and years" noted Tift Merritt, and Crews and Gebbia in later interviews both followed suit by noting they had met Helling through social networks. In fact, Helling has very intentionally pooled creatives outside of the realm of design in order to bring a fresh perspective to the ideation process. In a New York Times article from earlier this month, Helling noted those outside of the industry "don't know all the things that they're not supposed to do. It's a clean slate. It comes from their heart, rather than being an academic exercise." 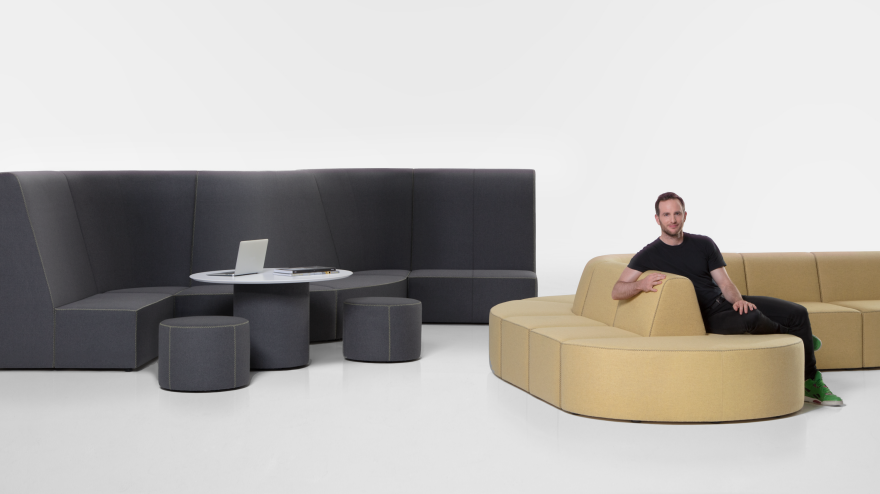 The motivations behind each collection on view were wildly different depending on the new-found furniture designer you talked to. Perhaps unsurprisingly, the most utilitarian perspective came from Airbnb's Joe Gebbia, who got the inspiration for his collection of office furniture during a chat with Helling in Milan: "I was sitting with Jerry in this tiny little café next to Rossandi Orlandi and he poses this question to me. He goes, 'Joe, if you could design any furniture for your office what would it be?' and I go, 'Oh my god, I'm so happy you asked that question.'" Since starting the overwhelming success story that is Airbnb, Gebbia has moved to five different offices over nine years, which left him feeling a lack in terms of the furniture being offered to corporate environments. "[Furniture we had] was never as flexible as we wanted our culture to be and in many ways," says Gebbia. "I think a lot of the systems we were using were rooted in 20th-century values where people come in and sit down at a desktop computer, pick up a landline phone and sit there for 8 hours a day." 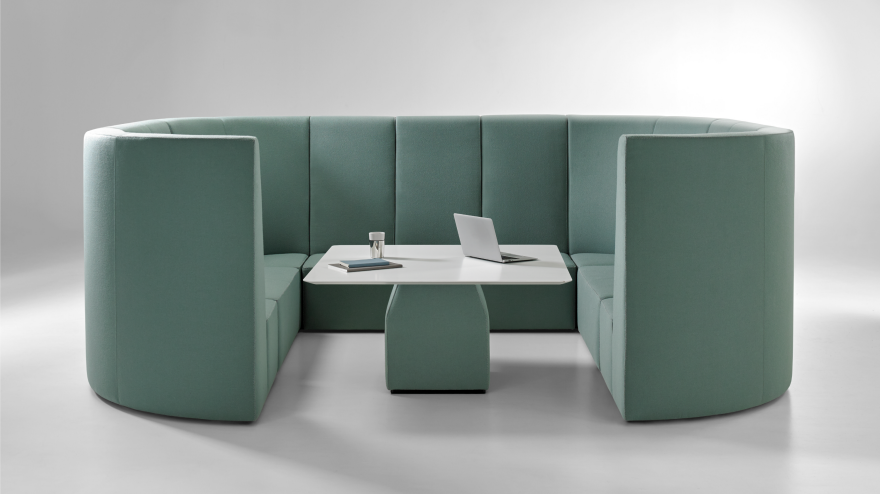 Gebbia's collection is completely modular and can easily be reconfigured

So after his conversation with Helling, Gebbia got to sketching and came up with around 7 different concepts to play with. It should be noted that Gebbia is a graduate of the industrial design program at RISD, so the process of ideation was not at all unfamiliar to him; he's simply been out of practice as he's transitioned into the realm of service design. After a round of ideation and with the help of Helling, who Gebbia notes is "an incredible editor," they came to a simple yet ingenious conclusion: creating a furniture system using a modular building block configuration. 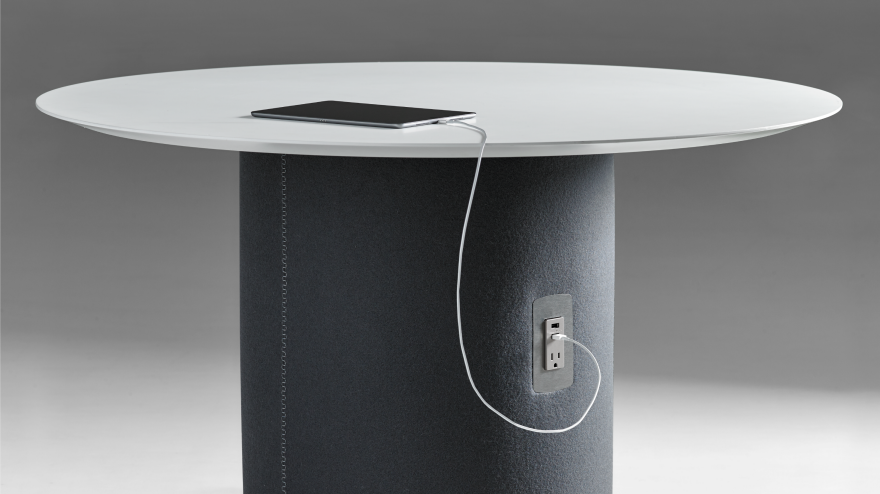 A detail of the wool-felted table

The result was a collection of modular furniture called Neighborhood that Bernhardt Design mentioned is their largest family of furniture to date with 42 different pieces. Two details of Neighborhood struck me as novel: one, it's ability to adhere into many different configurations and two, its felted wool material. "One consideration that led us to the felted wool was [it was a way to] have acoustic integrity built into the furniture," and Gebbia added that for an open floor plan office like Airbnb this is absolutely crucial. The pieces, in the end, are perfect for the corporate environment—the style certainly does not steal much attention and are subdued enough to fit into any corporate environment, but also welcoming in texture and their customizability.

"I think a lot of the [office furniture] systems we were using were rooted in 20th-century values where people come in and sit down at a desktop computer, pick up a landline phone and sit there for 8 hours a day." 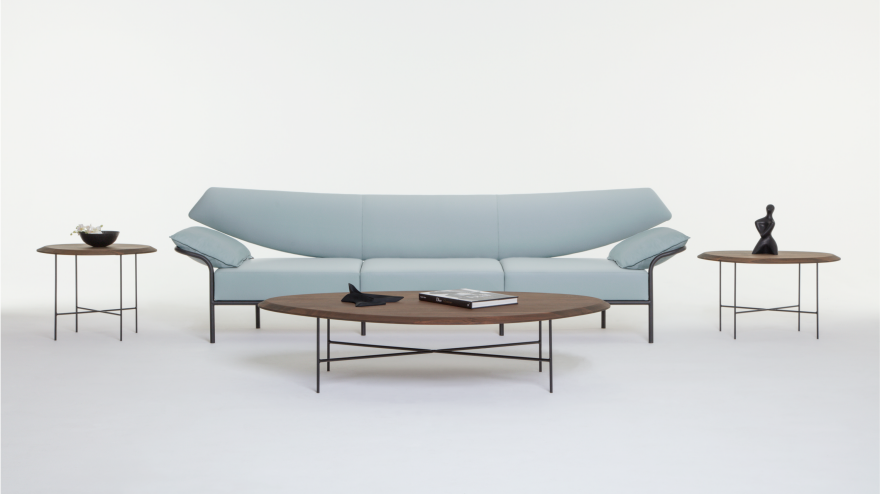 A couch designed by Crews, inspired by ibis birds

It was interesting comparatively to talk with Tift Merritt and Terry Crews about their collections, as their motivations had much more to do with expression and narrative than fulfilling an existing need, which I suppose makes sense if you're coming at design through the lens of an artist. "It's all about the story," Crews excitedly told me on the ICFF floor. His collection of furniture was largely inspired by research he was doing about Egyptian culture. "I was thinking of just standing around the Nile and seeing water lilies all across the water. On one of the hieroglyphics, there's this Egyptian sky god named Horus and he was always pictured in hieroglyphics sitting on a water lily. And I was like, that would be cool as a piece of furniture. I thought, 'I'll make a lilypad and the flower will be the chair'. And basically when you sit in it, you feel like a god."

A trained illustrator, Crews put together a deck of sketches that Helling allegedly said were the most accurate sketches he'd ever seen for a design concept sketch. Crews dropped out of college a few credits shy of graduating to join the NFL, but that doesn't mean he hasn't stopped thinking about creating things: "I had an art scholarship, so my mother would always tell me, 'you're an artist. Never forget your art.'" 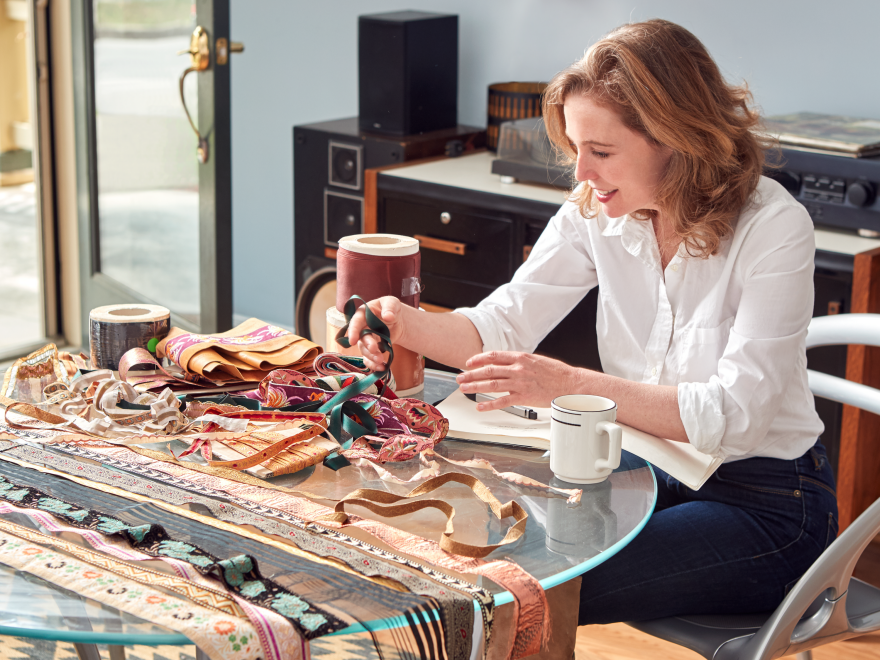 Merritt's debut collection of textiles on display at the booth, on the other hand, came more from a peculiar hobby that originated from being on the road with her band: collecting ribbons. "I got addicted to textiles and ribbon because I could actually take them home with me in my suitcase," says Merritt. She would find ribbons and make guitar straps out of them, ones that would complement the style of her very impressive guitar collection (many of her guitars were on display at the Bernhardt Design booth). Much like creating a piece of music, her textile collections 'riffed' rather than formally borrowed from the vintage ribbons she collected over the years. "[With the collection] I think I was trying to make some connection with color and sound… for example, the solids in the collection are called 'Solo' because it's one tone, one brush of color, it's one trumpet in your ear." 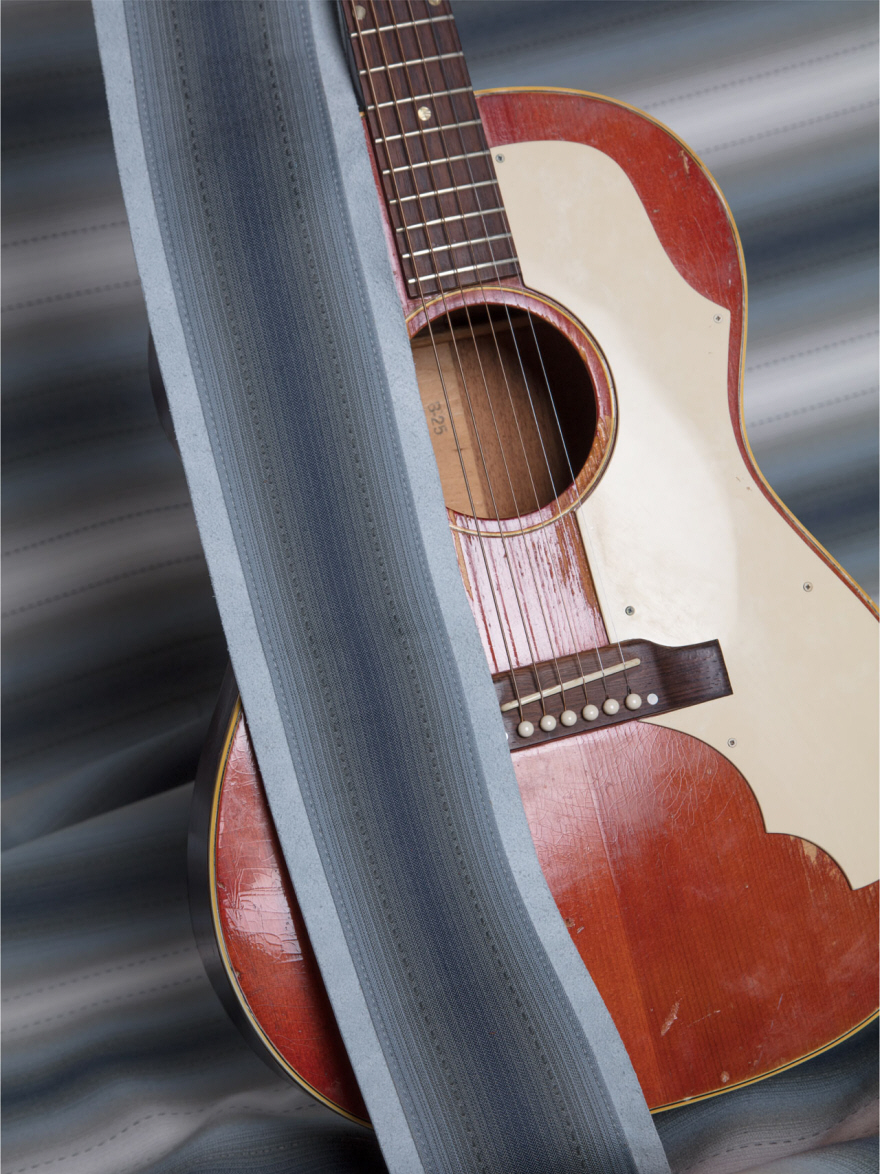 One of the textiles from Merritt's textile collection for Bernhardt Design

It is, of course, easy as designers to criticize individuals designing furniture who know nothing about the details of the profession, but there's also something to note about the way in which non-designers approach the act of designing. For Crews, in a way, he saw his collection as a way to make commentary about creative industries being inclusive to all imaginative minds: "I would say, sometimes in this world people want you to stay in your lane out of competition, but it doesn't help. To me, creativity means everybody does it. I don't see a problem with that. Everybody who's an actor right now was in another business. You're always something else before you started." Gebbia, Merritt and Crews all admitted that although they weren't exclusively designing every little technical detail, they were certainly along for the ride and learned quite a bit as a result. Merritt sorrowfully said through the process she "learned the heartbreak of commercial testing. We had a felted fabric that we couldn't figure out how to [work], and I loved it. But to send something off to a mill is like sending a love letter and never hearing back, you know? Or waiting to hear back."

Ultimately, it seems what other creative minds can offer is certainly not the expertise of ergonomic detail that designers are well-known for, but instead a creative spark that sends design projects in a refreshing, out of the norm direction. In this case, it's up to each individual to judge whether these projects ended up a failure or success, but perhaps that chance for design to take a refreshing and unexpected turn is precisely why anyone with a good idea deserves a fair chance to take a crack at creating.

Bernhardt Design Gives Creatives Outside of the Industry a Chance