Threaded connections, such as bolts and nuts, are used in a wide variety of applications, ranging from plastic toys to massive bridges. The one similarity that ties them together is that these connections need to stay together when we want them to, but also come apart when needed. For example, the valve covers on an engine have to stay in place while driving, but we also need them to be removable, so we can service the engine components.

This article will explore different methods to ensure that these types of connections stay together when we need them to. The term "Thread Locking" is typically used for methods of ensuring the threads stay in place without loosening and will be used often in this article.

There are many types of threaded connections, but the primary types are as follows:

- Bolts and nuts – This is probably the most common and low cost type of threaded connection. It is used on applications ranging from automobiles to cell tower antennas. The image below shows an example of a bolt, nut, and flat washer. 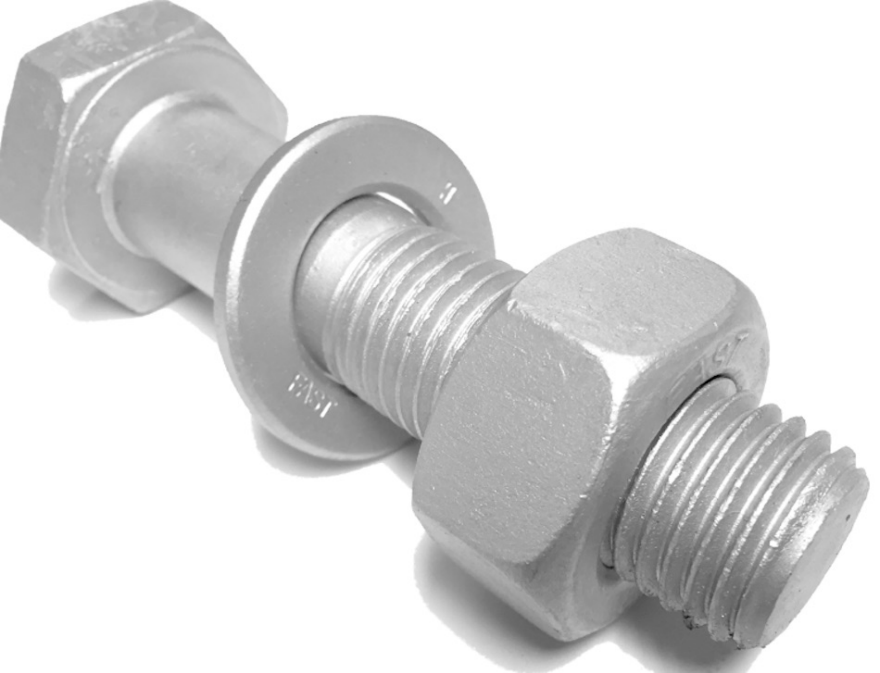 - Screws and Tapped Holes – With this type of connection, we are installing a screw into a hole that has been drilled and tapped into a housing or mechanical component. The most commonly recognized difference between a screw and a bolt is that screws typically go into threaded holes while bolts go through 2 unthreaded components and fasten with a nut. The image below illustrates a screw fastened into a threaded aluminum extrusion. 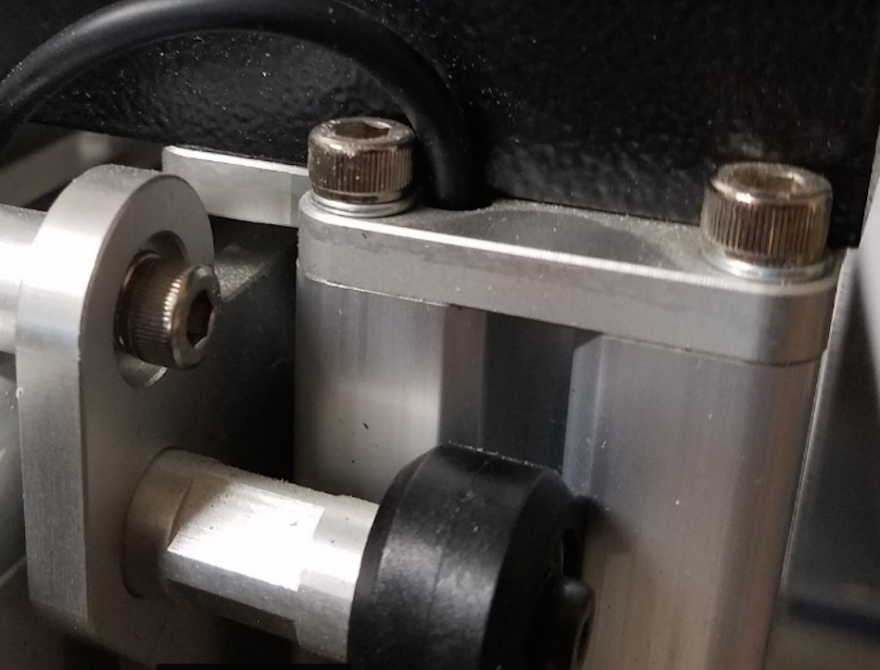 We can see three cap screws that are all going into tapped aluminum components. These may be used instead of bolts for precision, ease of assembly, and reduced component play—likely a combination of factors in excess of what we've already mentioned.

- Threaded Components - these are most commonly shafts or housings (typically cylindrical) that have both been threaded to fasten together. A flashlight bulb and battery tube is a good example. The image below illustrates the concept of 2 cylindrical housings threading together.

The final idea I want to touch on is the concept of torque and preload. Threaded components are torqued together to create some form of axial preload. This torque is measured in units, such as in-lbs or N-m, but is always just a force acting to "twist" the components together. With threaded components, this torqueing together creates an axial force that is referred to as preload. The image below illustrates a before and after picture of a bolt being tightened. The red lock washers are in the expanded state, but when the assembly is torqued together, the lock washers are compressed and behaving as springs. 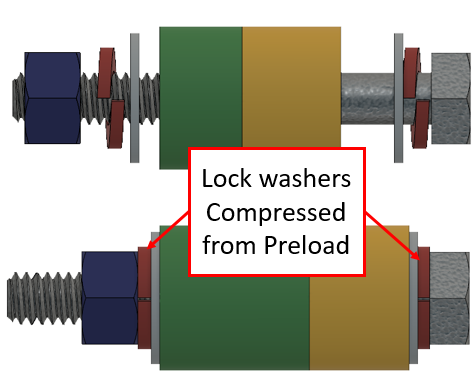 In some cases, the frictional forces from this preload are enough to hold the fastener together. But in other cases, we need to use thread lockers. Some of these cases are high vibration, expected stress relaxation (creep in plastics), and cyclic stresses.

Mechanical Hardware – these are physical components that are used to prevent threaded fasteners from loosening. Some of the common items that are used are:

- Lock Washers – there are a few styles of lock washers, but they are all placed under the head of a bolt or screw with the intent of preventing it from loosening and to maintain a preload. The image below is of a split lock washer.

This type of washer acts as a spring when the bolt is tightened. That spring action maintains some preload, even if the screw relaxes a little. However, the effectiveness of these components in high vibration conditions may be low. Another type of lock washer is the Nord-lock, which relies on mechanical ramps and teeth to prevent loosening, as shown below: 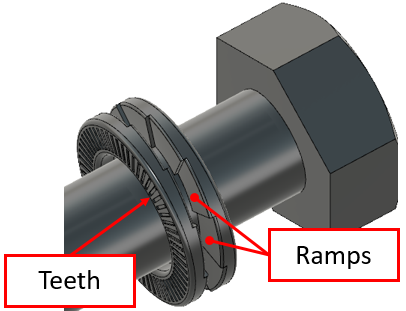 The teeth bite into the bolt or screw head, as well as the material under the washer, while the ramps are oriented so they "climb" in the direction that would loosen the fastener. In other words, to un-torque the bolt, you have to increase the preload, while overcoming the ramps. These are effective but relatively pricey and typically used on larger hardware. There are a lot of other lock washer styles, so I encourage you to research additional options.

- Nylon Insert Lock (nylock) Nut – these have a circular nylon insert that locks the threads in place by deforming over the mating threads. They may not hold the peak preload in all cases of vibration, but they will typically retain the nut, even if it loses some preload. An image of a nylon insert nut is shown below. 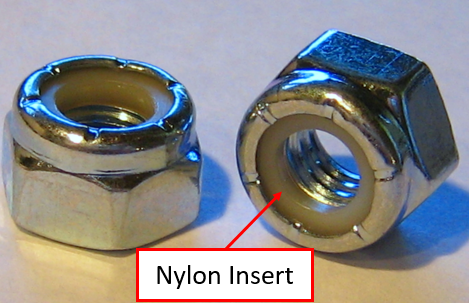 These are commonly used in high vibration environments on non-safety critical applications where you still want to prevent the nut from possibly loosening and falling off. As an example, this type of fastener is used on my hitch mounted mountain bike rack, as shown below. 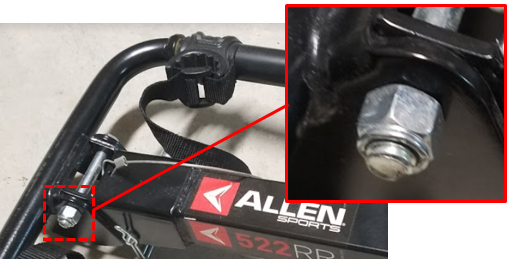 In this application, there will be no immediate safety hazard if the preload is lost because the screw still supports the load in double shear. However, if the screw falls out, there may be a safety concern, so we need to make sure the bolt remains connected.

- Safety Wire – the use of safety wire is very common in aerospace, defense, and racing. It works by installing a steel wire through a hole in a screw, bolt, or nut and anchoring it to another item. Safety wire is often applied between a series of fasteners to hold them all together. The image below details such an application. 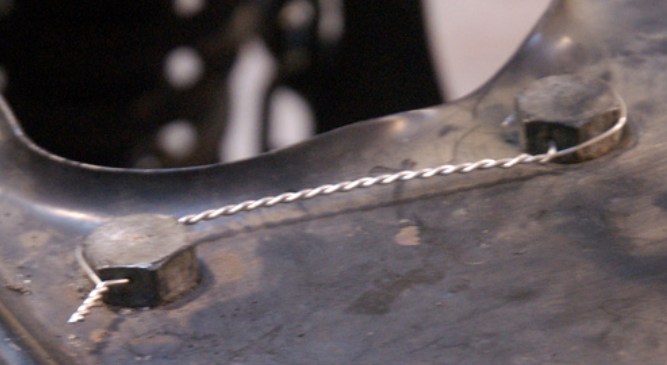 We can see that for one nut to loosen, the other must be tightened because of the orientation of the wire. This is very important to remember, because safety wire installed in the incorrect orientation is almost entirely useless.

- Castle Nut/Safety Clip/Retainer Pin – there are several iterations of the castle nut, but they all behave in a similar fashion. Some sort of pin is placed through the threaded shaft or bolt to prevent a nut from backing off. The image below illustrates a castle nut: 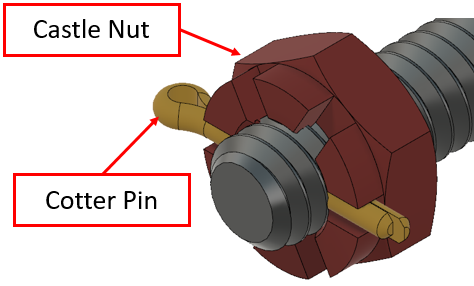 In this application, a hole is drilled in the bolt, so the cotter pin can go through the slots in the castle nut. This prevents the nut from rotating in either direction to prevent loosening, but it still allows for the pin to be removed and nut loosened, if needed. The image below is an example of a castle nut being used to secure a wheel hub in place: 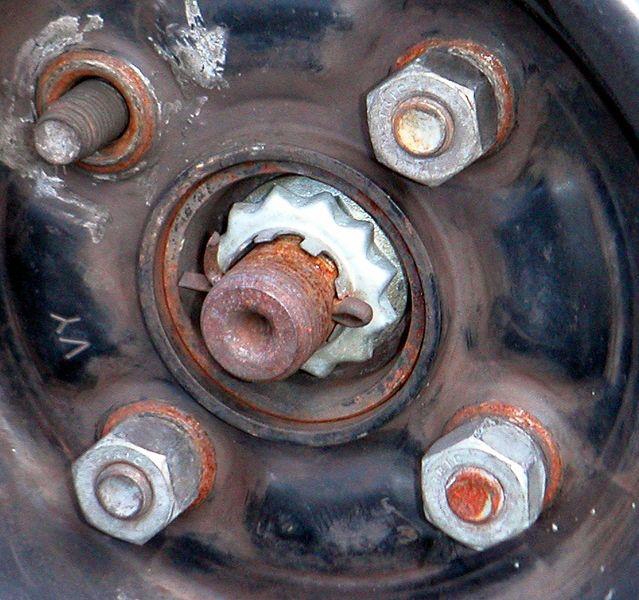 n many cases, adhesives are used to keep threads locked in place. They are even used in conjunction with a mechanical method above in many instances. In the oil and gas industry, where the drilling environment sees extreme vibrations, it's common to use a lock washer and an adhesive. The adhesives can be broken down as follows:

- Threadlockers (Loctite, Vibratite) – this category can contain a wide variety of adhesives, but they all serve the purpose of bonding the threads in place. Loctite is the most widely known brand in the United States, but there are several alternatives. The image below shows an example of Loctite 242 (blue) applied to a bolt.

It's important to note that Loctite comes in several grades, some of which are not intended to be removeable. You'll have to ensure you're using the correct grade for your application.

- Dry Patch – this quite literally means a dry patch pre-applied to threads to act as a thread locker. In some instances, it's just a dry nylon, and in others, it's an active adhesive. The image below shows a dry patch of a combination threadlocker/sealant used to seal a pneumatic pressure relief valve. 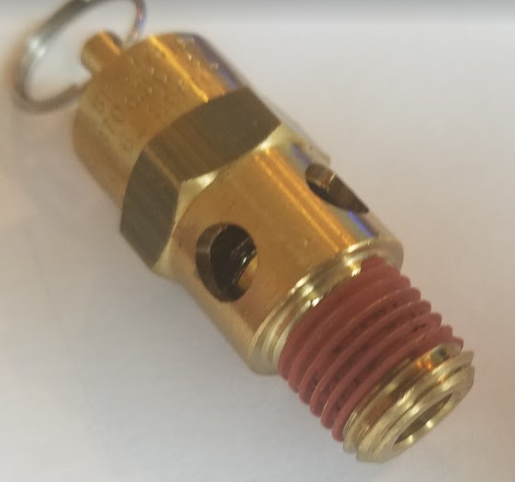 I've summarized these methods in a quick reference chart that will get you started in your search for a proper thread locker. 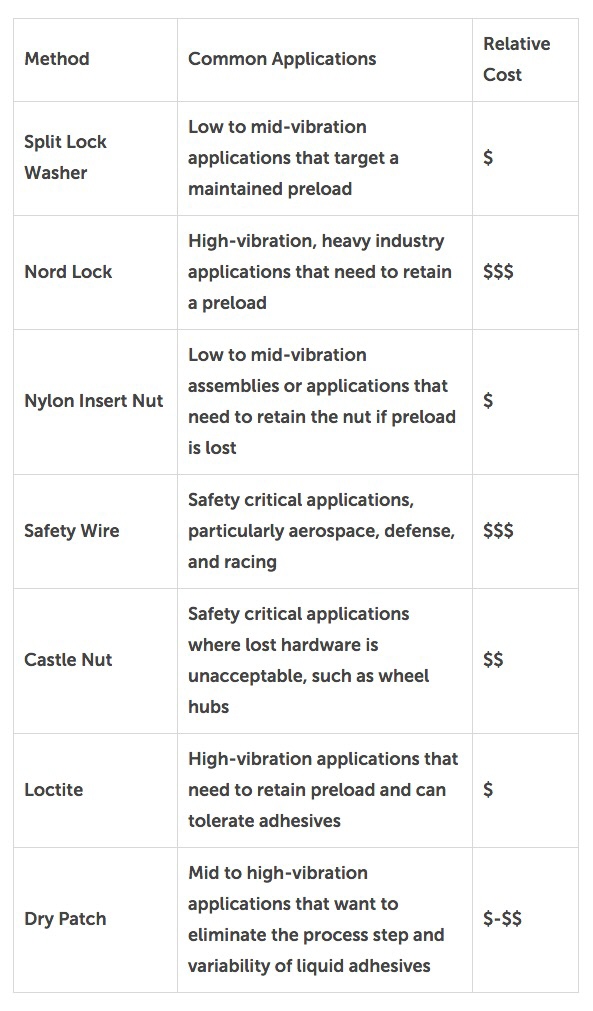 As we've seen here, there are a multitude of ways to prevent threads from coming loose under normal operations. However, it's important to choose the right method for the application. While the chart above will help get you started, more research should be done before you decide on your ultimate solution. When selecting your method, it will help to walk through these options with vendors and coworkers in an effort to match your application with a close fit. Your design can be further optimized if you test a few different options to see what gives you the best blend of attributes.