Turn Out The Light 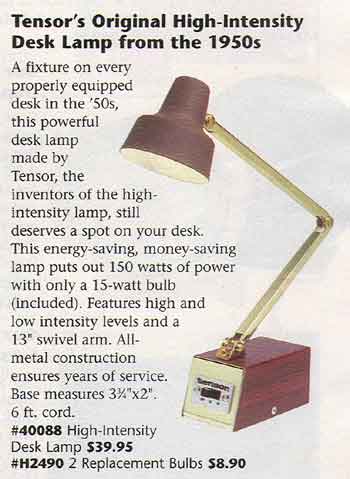 Jay Monroe, who invented the Tensor lamp, dies at 80.Mr. Monroe took a 12-volt automobile parking light bulb and stuck it into a reflector made from an ordinary kitchen measuring cup. He fixed the cup to a metal tube that was attached to a transformer, which reduced 115-volt house current to 12 volts. The current powered the small bulb, increasing the filament temperature and producing a brighter, whiter light. Because of the small bulb, the entire lamp could be made smaller, with a light-directing shade no more than two inches wide, focusing the bright beam onto a small area.

His other inventions included "an early telephone answering machine, a metal tennis racket, a disposable flashlight, a light bulb made to last for three years, a machine to remove indoor pollution and an electric pencil sharpener." He also developed a tennis ball sans fuzz, which, despite the promise of lasting longer, the product was not a success. We might suggest that success was denied by the millions of dogs who take pleasure in removing the fuzzy layer themselves!

Turn Out The Light