Half the battle is getting it out of the ground

I've read a number of stories about the 100-year-old giant sequoia that was recently moved to a new location in Boise, Idaho. Without exception, they concentrate on the most dramatic, but to me the least interesting part—the tree being moved on rollers.

Don't get me wrong; moving giant objects is incredibly cool whether it's done with rollers, trailers, or humongous cranes.

But when I see a 98' tree rolling down the street, the first thing I want to know is how they got it out of the ground without destroying the roots.

Evidently, the roots of most trees are in the top 3-4' of soil. So when moving trees too large to be plucked out of the ground with a tree spade, the usual method is to excavate to a depth of 5' around the roots some distance out from the trunk, wrap the edge of the root ball with burlap and wire, and then drive a series of heavy pipes underneath it.

The pipes are installed edge-to-edge to create a platform under the root ball and tree above. It's unclear how they are driven, but I assume it's done with a bulldozer or some other piece of construction equipment. Once the pipes are in place, the tree mover ties them together with perpendicular beams or pipe.

Animation of a tree being moved.

A common method is to dig under either end of the pipes and insert I-beams there. The tree and roots are lifted by elevating the beams with one or more cranes or a series of hydraulic jacks. The beams are then lowered onto a heavy duty trailer for transport to the planting site—where the process is reversed.

This is similar to the method used to transport houses—the difference being that instead of driving pipes under the floor a series of beams are installed through holes cut in the foundation walls. 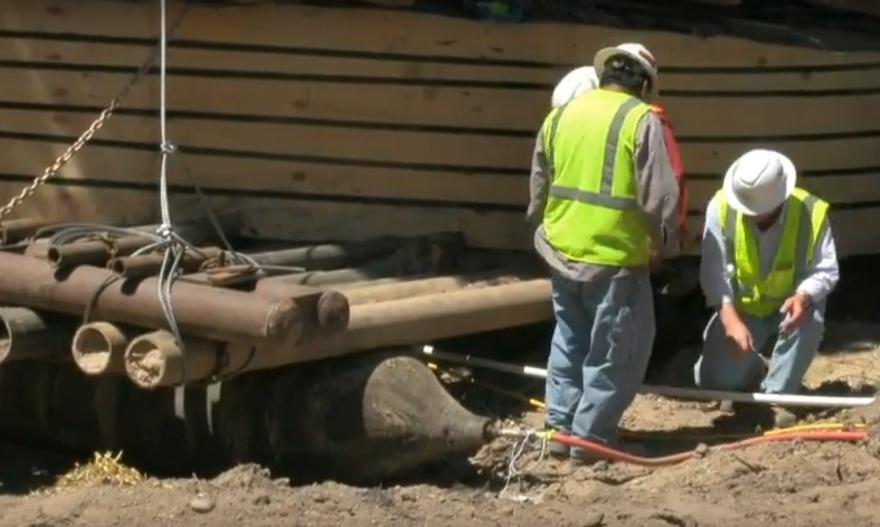 Pipes and air-filled roller under the root ball.

On this particular project the pipes under the root ball of the sequoia were connected to pairs of pipes installed perpendicularly on top of them. This left a flat surface below that could be rolled across a series of sausage-shaped rubber cylinders filled with air. It's more common to use wheels but in this case rollers were better because the root ball was large and the tree would be transported over flat ground.

The only thing missing is how they dealt with roots that go more than 5' down and survive the installation of pipes. The caption of a photo on Twitter offered a clue. Evidently, they cut those roots by pulling a wire cable under the pipes supporting the tree.

Moving the tree was just the final part of the job. Preparations began 18 months before with pruning and fertilizing to insure that the tree was in the best possible condition. According to the company that did the work, 98% of the trees they move survive.