The Coolest Ever Outfeed Table

Here's what happens when you hack a hydraulic lift table.

Wheeled hydraulic lift tables have been around for years, but none are designed for use as outfeed tables for table saws. That is, until Malcolm McGrath removed the push bar from his and connected the release valve to a home-made secondary foot pedal.

The table works as before; pumping the main pedal raises the table and releasing the valve lowers it. McGrath planned to use his as an outfeed table and wanted to be able to lower it remotely. By lowering the outfeed, he is able to make multiple rips without walking to the back of the saw to move cut pieces out of the way—they simply "stack themselves" on top of the cart. 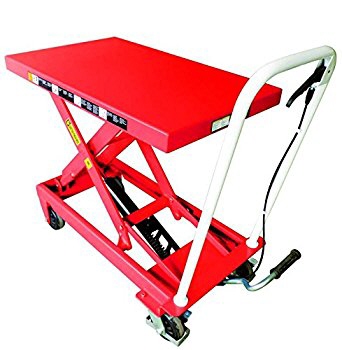 A standard hydraulic lift table—not the one McGrath used.

As originally equipped, the table had a push bar with an attached lever and cable for activating the valve. McGrath removed the push bar from his because it would be in the way and replaced the short cable with a longer one.

The long cable came from a bike shop and is the kind used for caliper brakes. He made it long enough to reach the infeed side of the saw and connected it to a homemade foot pedal that opens the valve when you step on it. With the pedal on the floor next to him, he is able to lower the table while operating the saw. When he finishes cutting he can roll the cart of material to wherever it needs to go..