Not the same thing as the American Arts & Crafts Movement

A small exhibit on Pre-Raphaelite art at the Met was an opportunity for me not only to take another gander at the lovely Jane Morris but also to revisit the Cabinet by Sir Edward Burne-Jones that, for me, epitomizes the early English Arts and Crafts Movement. The English A&C movement was founded based on ideas by John Ruskin, and William Morris was one of its most important proponents. While the movement was the inspiration for the American A&C movement, there is very little commonality of styles. 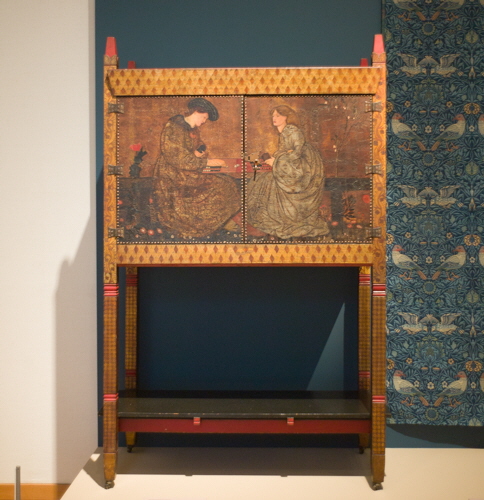 The American A&C movement as promoted by Gustav Stickley, The Roycroft Movement and others, was very much a machine-made movement. For all the accessibility of the designs for modern makers, the originals were designed and built in furniture factories. Stickley published his designs because he felt strongly that people should be able to make the work themselves; however, his fumed finishes, for example, were done with strong ammonia by professionals in a factory - a technique really outside the ability of all but the most determined amateurs.

The early English Arts and Crafts artists, Burne-Jones and Morris among them, were also part of the Pre-Raphaelite Brotherhood, a group of artists who wanted to roll back time and work in styles that existed before the time of Raphael. They also were stuck in a Dungeons and Dragons world of knights, shining armor, damsels in distress, and long tales of chivalry. J. R. R. Tolkien and C. S. Lewis both were inspired by the long tales that Morris wrote (poorly).

This piece from 1861 of painted and gilded pine, painted leather, copper hardware, and painted iron hinges is called "The Backgammon Players" and was designed by Philip Webb and painted by Burne-Jones. It was one of the earliest pieces manufactured by William Morris' company, and one of the first pieces of the English A&C movement. Morris's furniture, and English Arts and Crafts furniture in general, very much reflect 19th century interpretations of what a knight would want in his baronial hall or boudoir. This piece, stripped of its paintings, is a fairly straightforward Victorian cabinet. With its decoration and painted scene, it becomes a masterwork of the Pre-Raphaelite era, and a really cool English A&C piece. 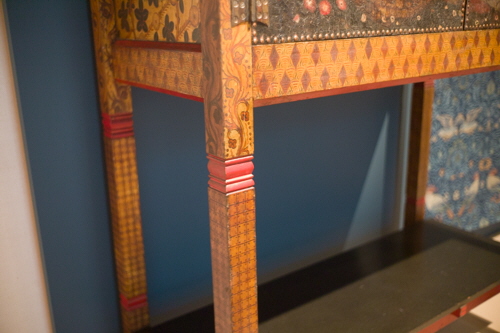 There is a lesson to be learned here, of course. What would happen if you took a fairly simple cabinet, and painted it up? Wouldn't that be cool? It certainly would be a much more interesting piece of furniture than lots of the stuff we see today. But it also shows off a difference in the way modern designers view furniture. Today, we look at furniture as a form, and the interest comes from the way the form interacts with the surrounding spaces. Material and grain choices are used to amplify the form. Contrast this with what Burne-Jones did. He created a complete narrative in the work. The interest in his piece comes from the story in the painting and the rest of the decoration reinforces that narrative and the mood of the piece.

N.B. There are exceptions to the modern fixation about form, notably that of Silas Kopf, a master of marquetry whose work very much is about the story on the piece in addition to the materials used and form of the pieces. But he is a glorious exception.