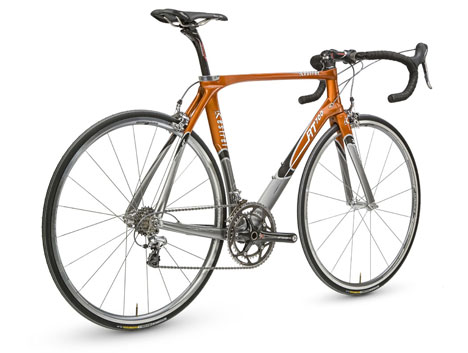 Three industrial designers and two mechanical designers over at IDE Incorporated spent two years going through six different designs before producing the RT700, the road bike to end all road bikes. It's just been awarded Outside magazine's "Best Road Bike 2007" and has already racked up awards from the IDSA and BusinessWeek.

The innovative design features an aerodynamically-shaped seatpost with an uncircular design that means you don't have to manually "center" the seat. The top tube is flattened to hold fabric food containers of the sort calory-burning triathletes use. Even the seatstays have been considered; here they're designed to present an easily-discernible hourglass silhouette to riders behind, which is important during group rides or pack races where cyclists behind you need to be able to see you.

The RT700 is manufactured by Kestrel, old hands at carbon fiber; bike fetishists can check out the details here.