When woodgrain was used as an authentication factor

I remember tearing money in half, back when things were all cash, when you needed a guarantee that someone would wait for you. I'm not sure if this was a New York City thing or if they did it in your town too. For example, let's say I took a cab to a remote location in the city to retrieve something. Arriving at the destination, I want the cabbie to wait for me while I run inside, because I want him to take me back to my origin point. I can't pay the cabbie in full, or he might take off and leave me hanging; and he won't let me out of the car without paying, for fear I'll stiff him.

In that instance I'd rip a ten-dollar bill in half, give him one half and pocket the other while I momentarily disappeared. The individual ripped halves were no good to either of us, but reunited and Scotch-taped back together, it was good currency, so the cabbie would wait. This was a common-enough practice that every so often you'd encounter fives, tens and twenties that had been Scotch-taped back together. 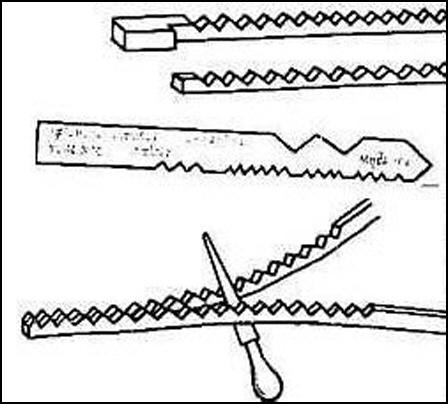 Whomever first came up with the ripped-bill idea probably got the idea from British split tally sticks. Tally sticks have existed since the Stone Age as primitive recording devices; bones were notched with sharp objects to keep count of things. Bone was eventually replaced by easier-to-acquire wood switches, which were notched to record things like the amount a debtor owned to a creditor. The British innovation, which dates back to the 1100s or so, was to split that piece of wood down the middle after it had been notched. One half was for the creditor, the other half for the debtor.

What this did was create two forgery-proof artifacts that could only be matched with each other. Even if a forger could duplicate the split exactly, there was no way to fake the grain of the wood that would indicate a visual match.

What's interesting is that the way the sticks were split evolved as tools did. In the 1100s, the sticks were undoubtedly split using something like a froe and probably looked like this:

As finer saws were invented, the cuts got fancier. This tally stick below, for instance, could only have that Z-shaped cut made with a coping saw (reportedly invented in the 1600s). It's also possible that the lengthwise cut was made by a similarly narrow blade starting in the rightmost hole, then the two angled crosscuts made to meet the first cut. 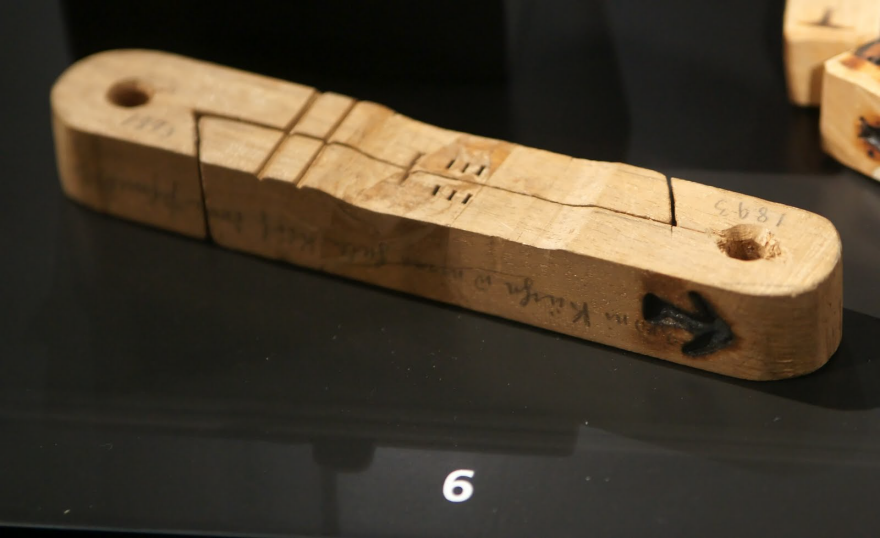 This cut below is peculiar. It appears the piece was initially sawed in half lengthwise, then a crosscut was performed on each half with the cut-offs from each piece laminated to the other pieces.

As you can see, the longer piece is labeled "stock" while the shorter is labeled "foil." The stock was given to the creditor, the foil to the debtor.

Tally sticks lasted in the UK until the 1800s, at which point ledgers became more popular. This led to an unexpected disaster. As the BBC reports,

To celebrate, it was decided to burn the sticks - six centuries of irreplaceable monetary records - in a coal-fired stove in the House of Lords, rather than letting parliamentary staff take them home for firewood.

Burning a cartload or two of tally sticks in a coal-fired stove is a wonderful way to start a raging chimney fire.

So it was that the House of Lords, then the House of Commons, and almost the entire Palace of Westminster - a building as old as the tally stick system itself - was burned to the ground.

Perhaps the patron saints of monetary historians were having their revenge.