Who's got the better Throne Room? 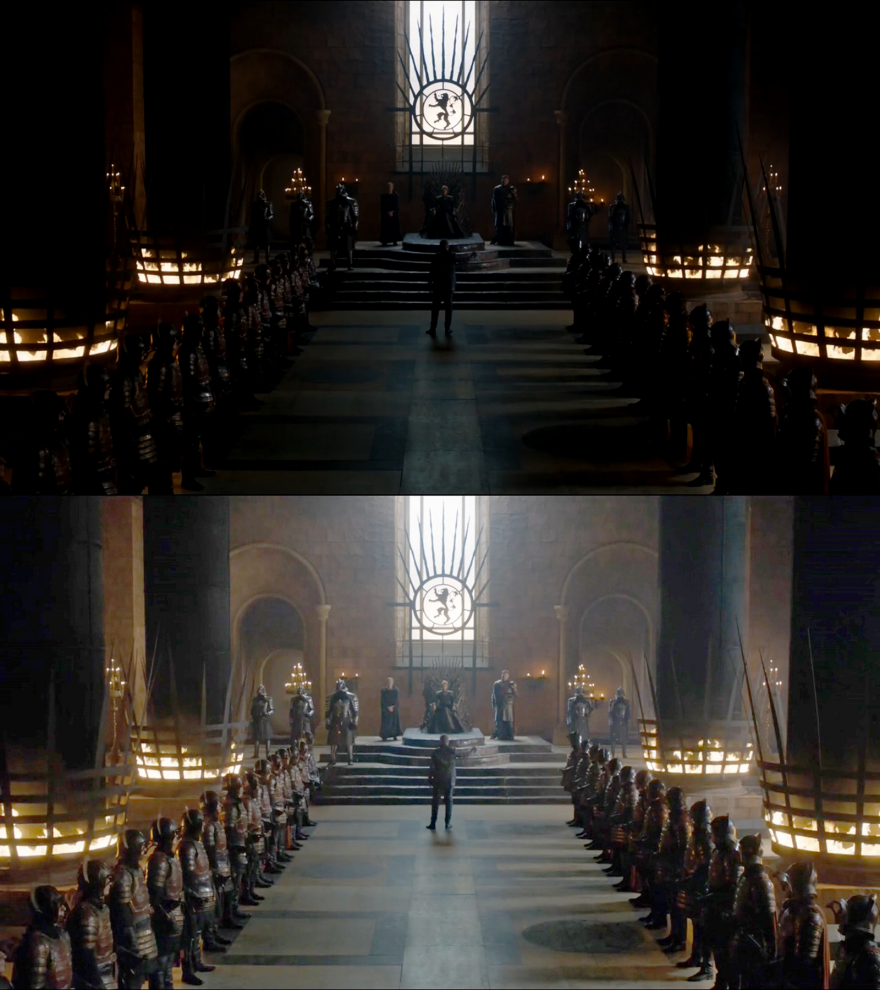 If I have one complaint about "Game of Thrones," it's that it's too dark. Not in terms of tone; whatever I've seen on the show is still not worse than what we do to each other in the Core77 offices each week. I mean that the production designers slave over interior sets that we viewers do not get to appreciate in full, because the DP either forgot to bring more than one light or the art director is trying to make us go blind.

So we've taken some screengrabs from last night's premiere and tweaked the levels to give you all a better look.

First off in the Citadel library shot, we can see what they didn't show us last year: That there is a clerestory oculus dead center in the ceiling. 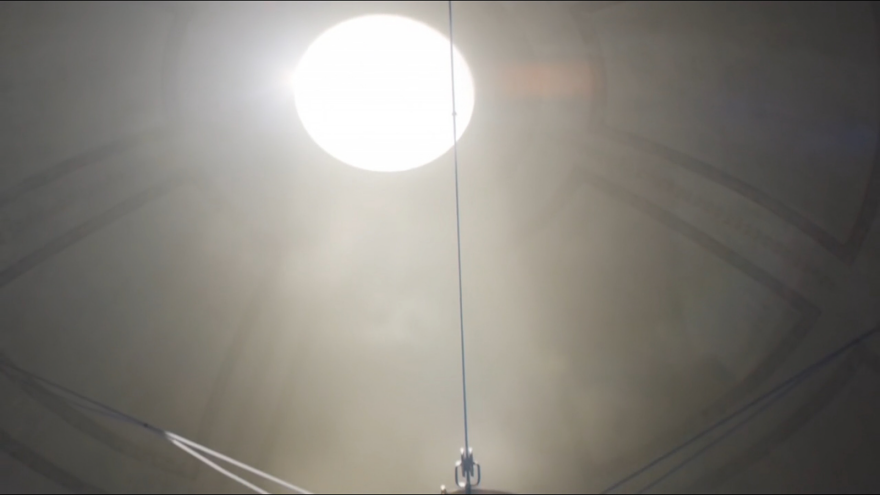 This, along with the other clerestory windows, provides the light that illuminates the room after it's bounced around on that crazy Alexander-Calder-meets-Sherlock-Holmes contraption. 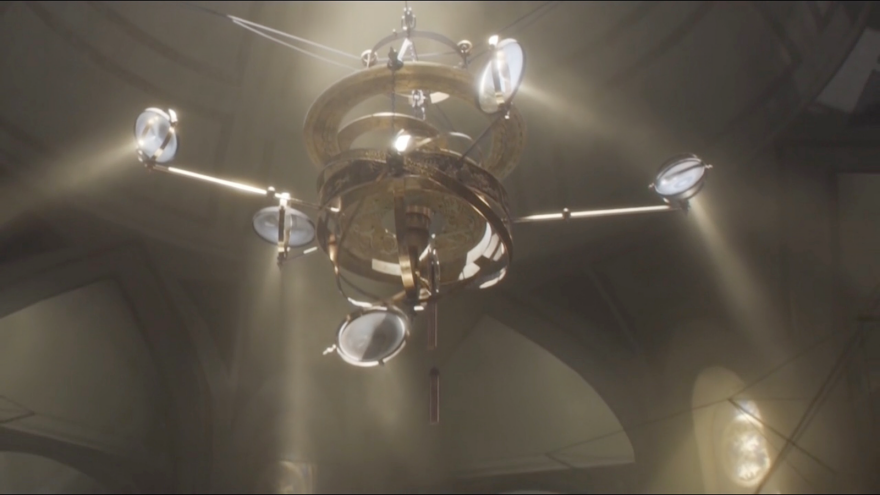 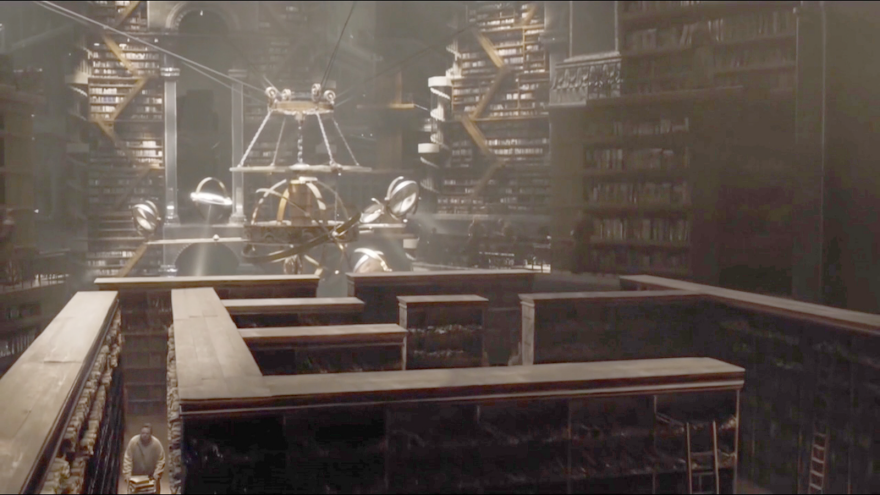 What do you reckon these chains on the books are for? I see lots of chains but no locks. It's almost like they want to add extra weight just to try to break the bookshelves, which must be damned sturdy. Ikea Billys these ain't. 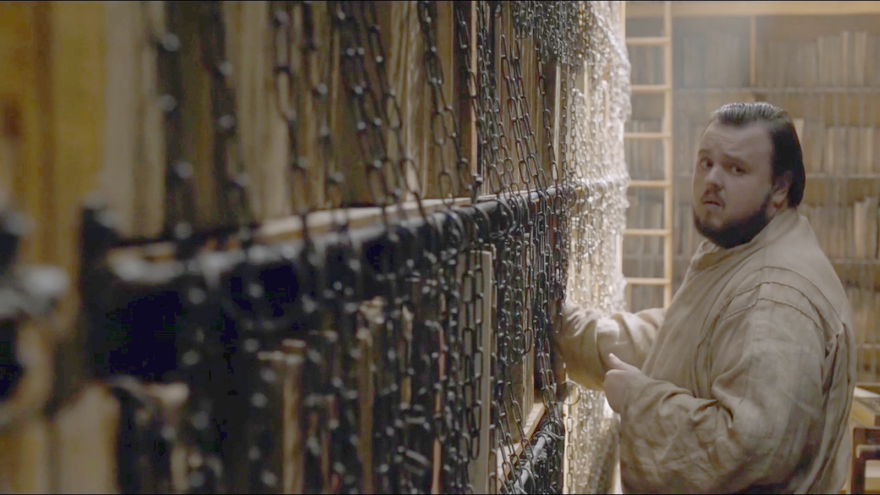 At the Citadel we also get to see what a public men's room looks like. Notice there's no toilet paper anywhere. Gross. 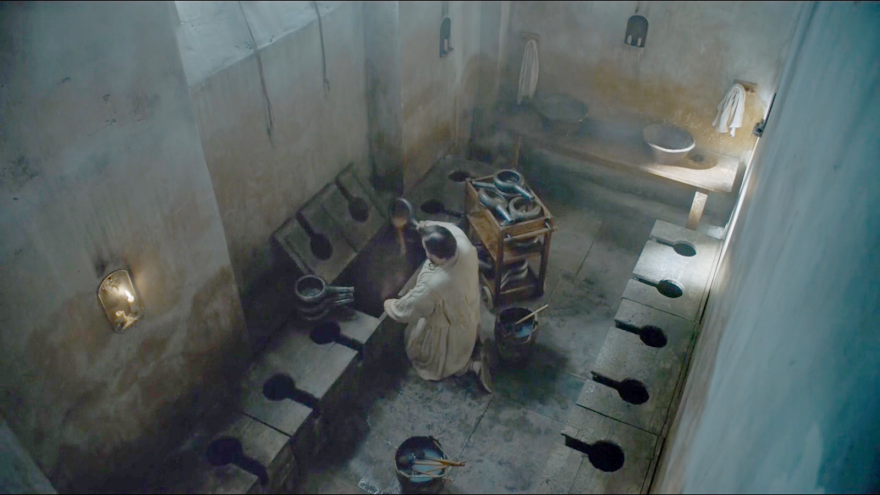 Who's got the better Throne Room? Here's the one in the Red Keep in King's Landing, where Cersei has cemented her ascension to the throne. The floors look to be marble but the pattern isn't particularly attractive, it's like the contractor ran out of white and just filled the rest in with some ochre and black cut-offs he had lying around. 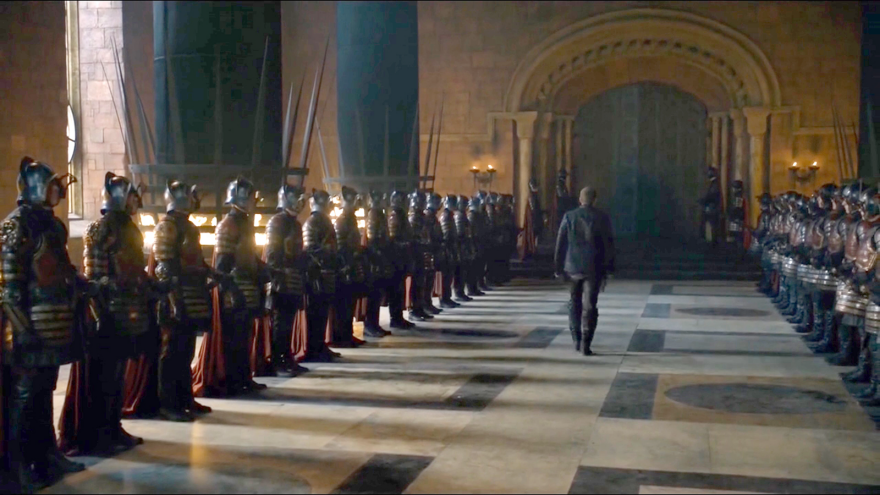 The circular flame pits ringing the columns seem like an odd design choice. Coupled with the pointy fence encircling them, it almost seems like they're there to keep punk kids from trying to climb the columns. 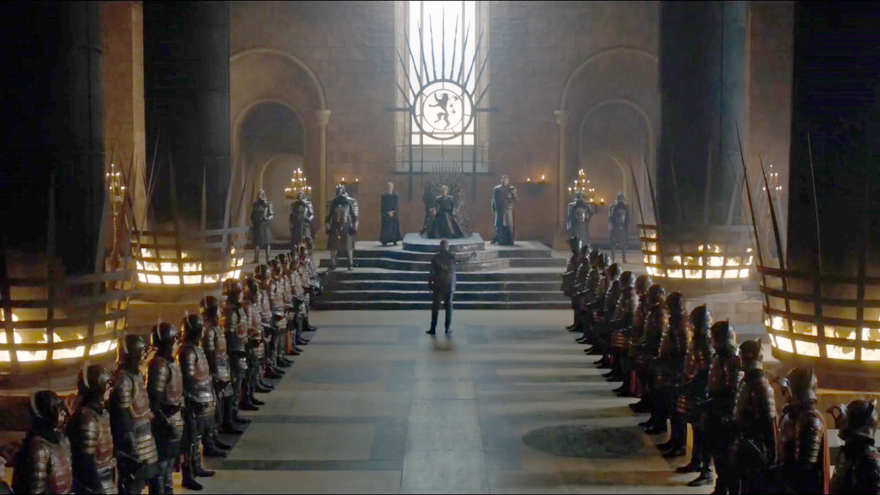 The Throne Room Daenarys has inherited (or is squatting in) at Dragonstone has a very different design aesthetic. You can see that the architect had a thing for triangles and has also specified hexagonal floor tiles, which had to be a real bitch to cut assuming they don't have tile saws in Westeros. 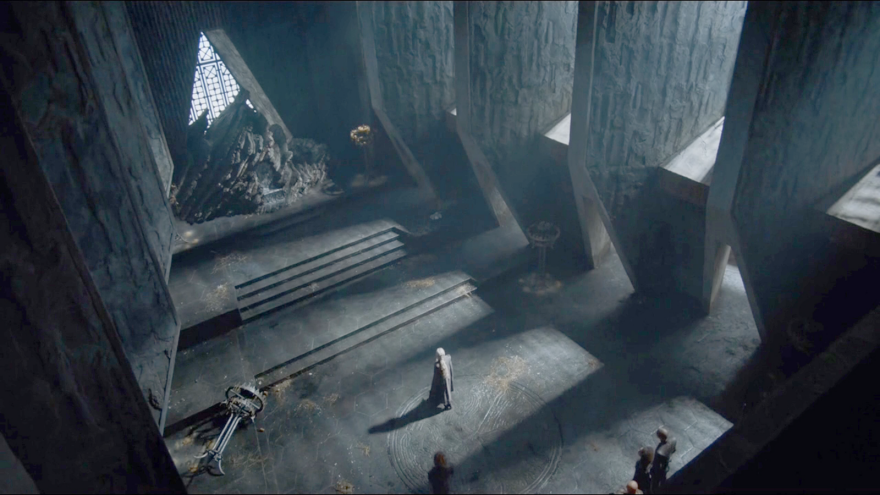 Here we can also see what happens when you design the space before buying the furniture. When you sit in a throne, basic design sense says that you put a window behind you, so that the light from it will blind your subjects as they address you. It's a classic power move. 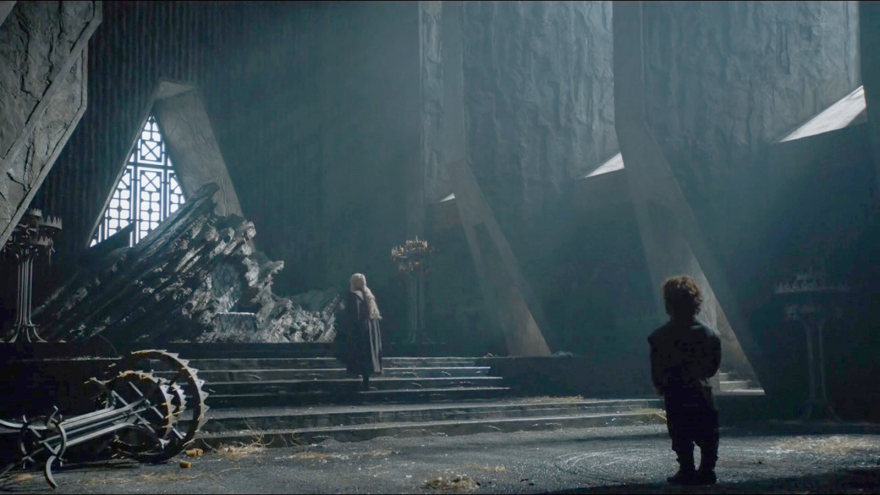 However, the rather monstrous throne with the 45-degree-angle motif selected by the interior decorator is so damn big that it blocks most of the window, nullifying the effect. I'm calling this a design fail. 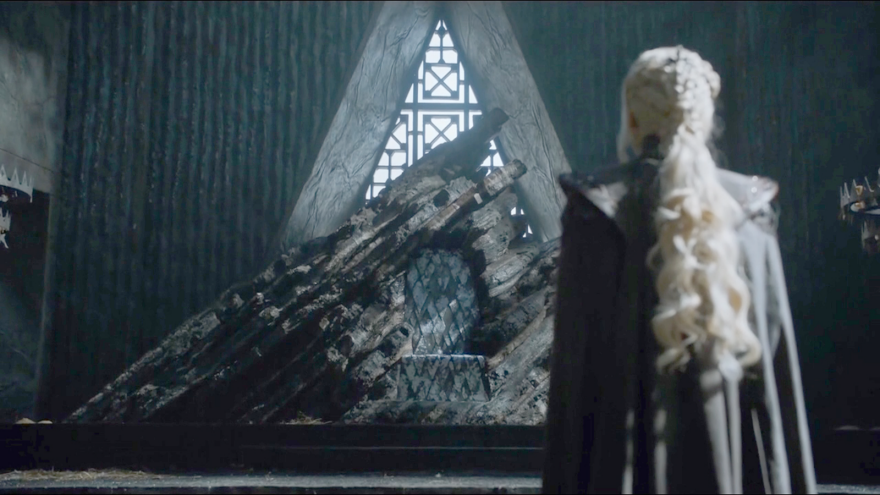 In contrast you can see that over in the Red Keep, the bottom of the window behind Cersei handily clears the top of the Iron Throne. This is what happens when the designers communicate with each other, people. 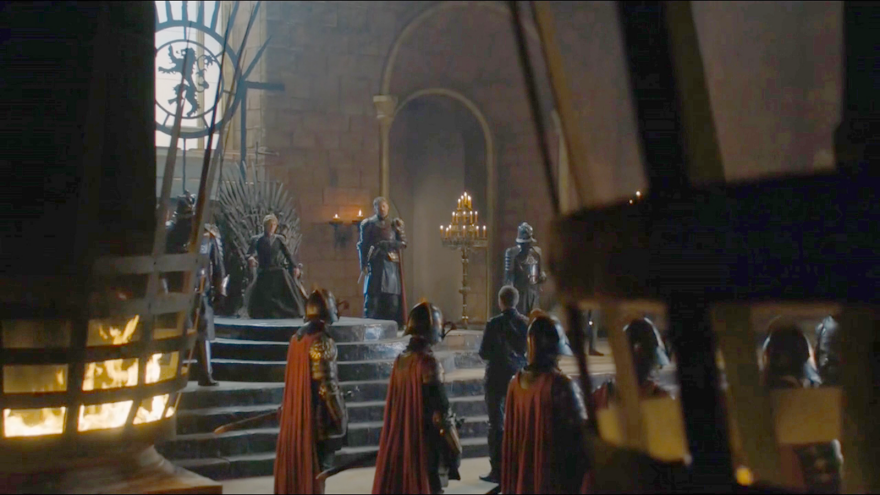 We don't get to see the Throne Room at Winterfell, but here we see the Great Hall, where the floors appear to be stone or very poor-quality tile. And that has got to be the worst grouting job I've ever seen. 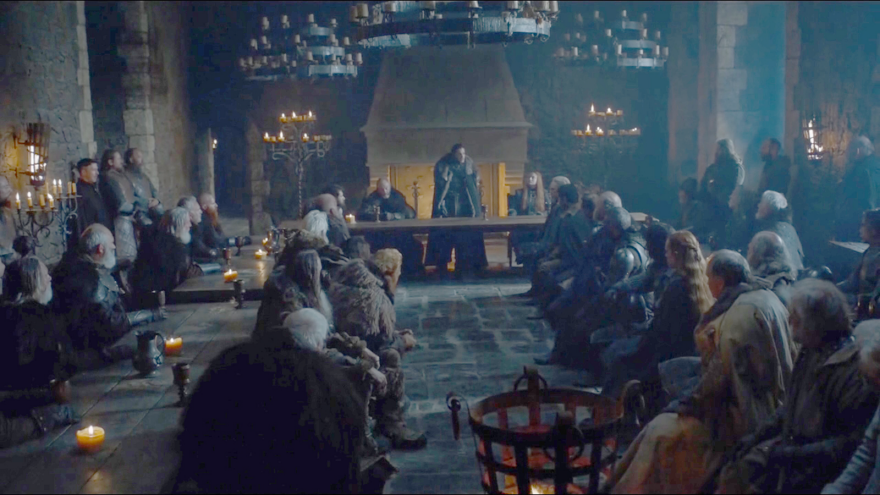 "I have elected not to have the overhead candles lit, on account of Winterfell's new eco-friendly policy."

Designing a Great Hall can be tricky. You want it to be small enough that your instructions can be heard from the other end of the room, but large enough that if you have a bastard son you can alienate him by seating him at the far end, as Jon Snow described in the last season. 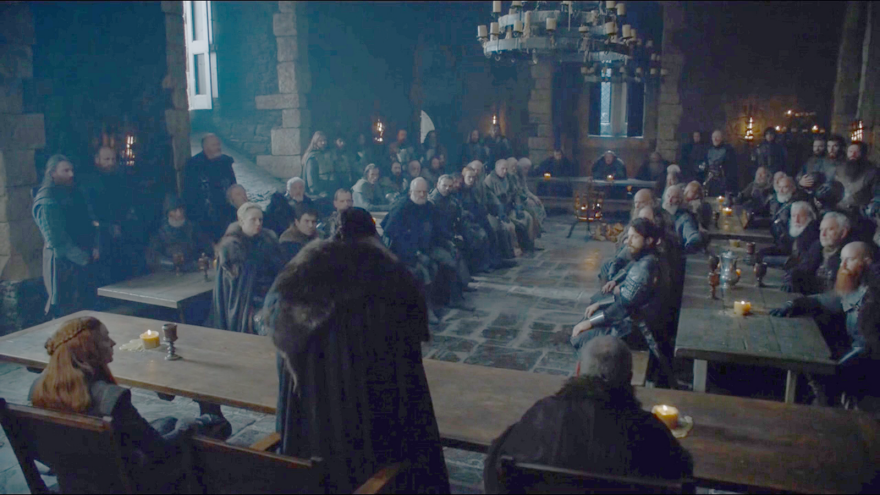 "Well if you're deaf, then why are you sitting at the far side of the room? Move closer, I'm tired of repeating myself."

Speaking of Great Halls, here's the one at The Twins, where Arya Stark has just served up some of her tasty two-buck chuck. This shot reveals what would have been the most promising vocation to pursue in Westeros: Candlestick maker. (I don't know what the margins are, but you're telling me you're not going to see a profit on volume?) 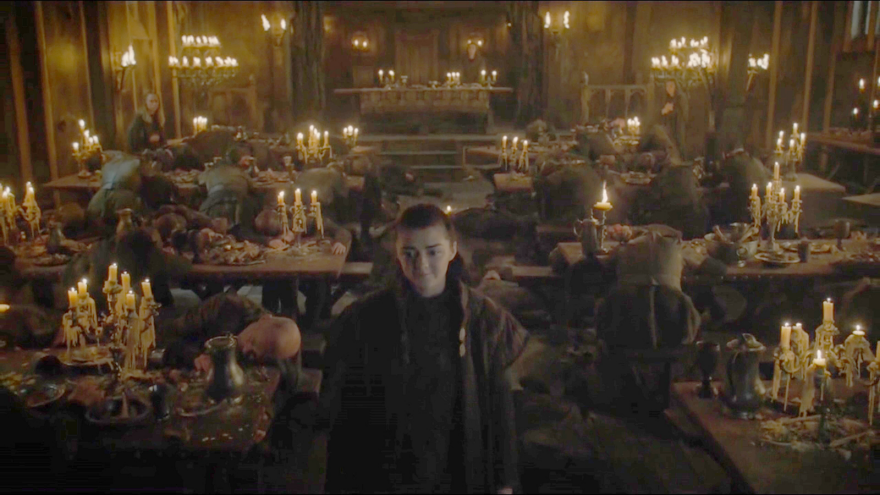 For someone who dropped out of Assassin University, she seems to be doing pretty well

Back at King's Landing we see that Cersei is, after all, a typical rich woman. Here she's commissioned a bit of cartographic whimsy for her courtyard, and she doesn't even have the decency to wait until the contractor's finished before she steps on it. You know he's just dying to scream "That's NOT DRY YET! …Milady." 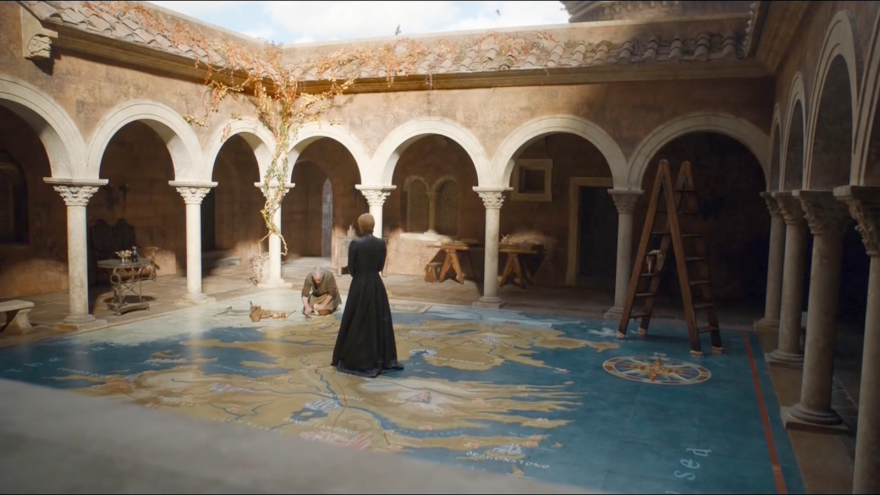 "The blue paint takes longer to dry, can you not drag your skirt over it, please?"

Also interesting to see that A-frame ladders exist in Westeros. 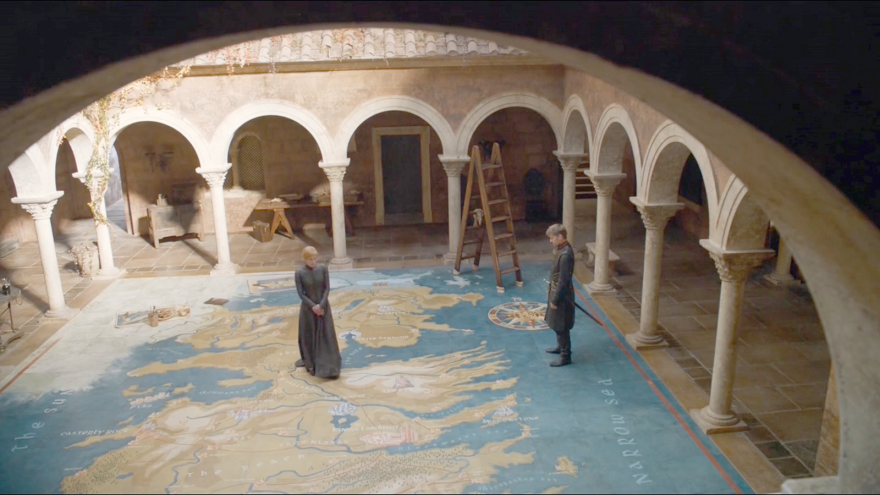 "I'm still mad at you, Jamie. You stand on the blue part."

We knew that staircases existed in Westeros, of course. And when Daenarys finally reaches Dragonstone and the gates are opened… 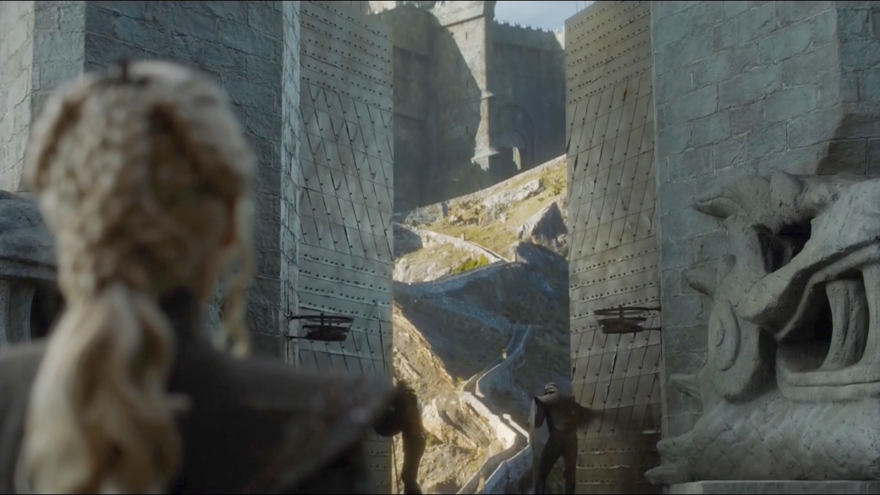 "Please tell me that's an escalator...."

…you see that only people with supreme cardio are ever going to make it to the building entrance. This is one of those staircases where if you reach the top, then realize you left your phone in your fanny pack down at the bottom, you think "Hell with it, I'll buy a new phone." 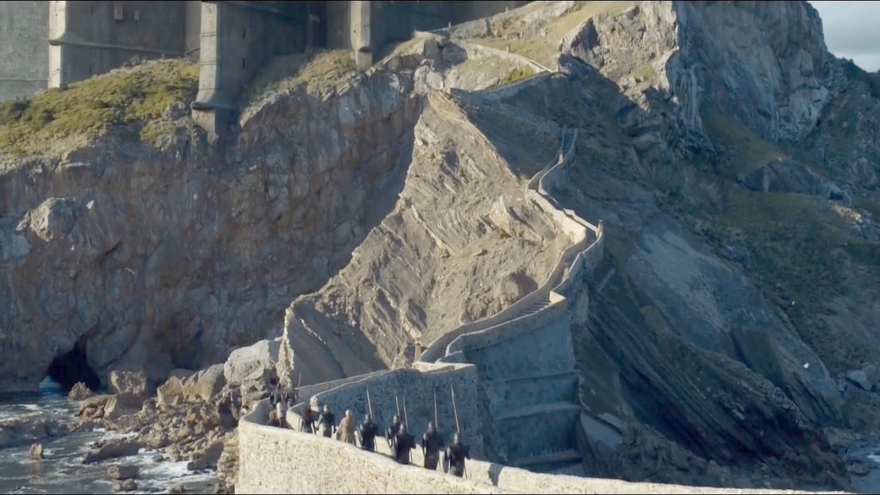 "Hey Daenarys, these spears are pretty heavy--is it cool if we just like, wait for you down here?" 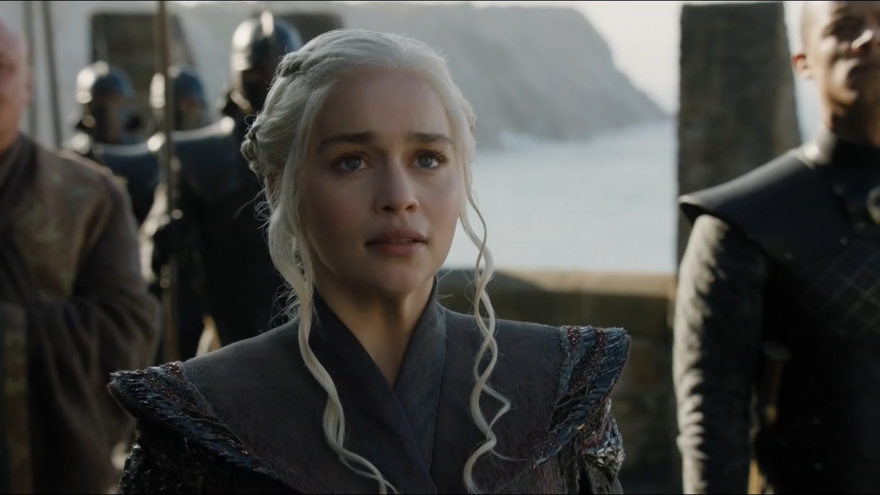 "I need to consume more carbs if I'm going to make it to the top of that thing."

Lastly, the most egregious Designer's Curse moment I had while watching the premiere: On the timbers at Winterfell, you can see the milling marks. During this whole scene I wanted to go over all of them with a random orbital sander.