Unlike warehouses on the outskirts of town, these multi-story distribution centers will be located in cities and manned by robots and drones.

Amazon's vision for the future includes multi-story automated distribution centers sprinkled throughout urban areas. Goods will arrive by truck and be delivered to customers by fleets of drones issuing forth from ports or doors in the building.

Few humans will work there because robots will perform much of the picking and warehousing work. At least that's what is presented in a recently published patent application. 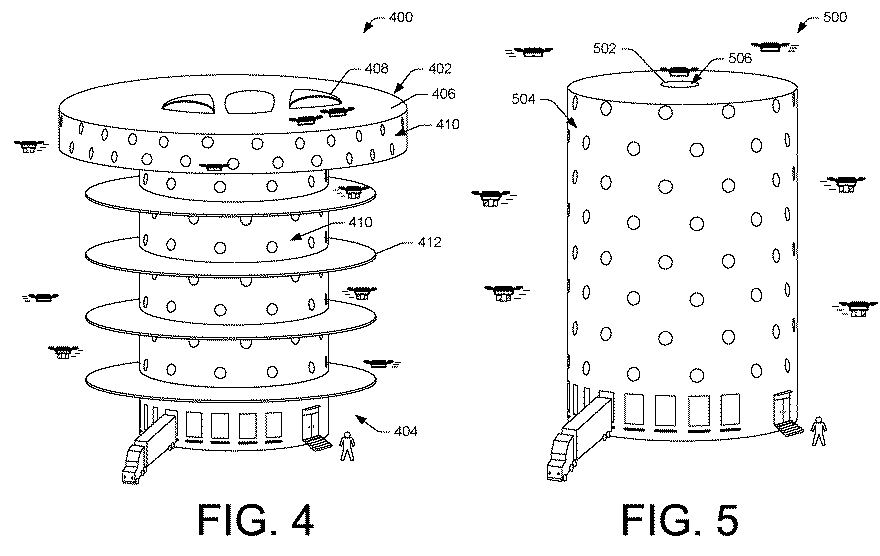 The building on the left looks like a giant birdhouse, which seems appropriate given the number of drones in the air around it.

The patent documents describe these buildings as "multi-level fulfillment centers for unmanned aerial vehicles"—what we refer to as drones. 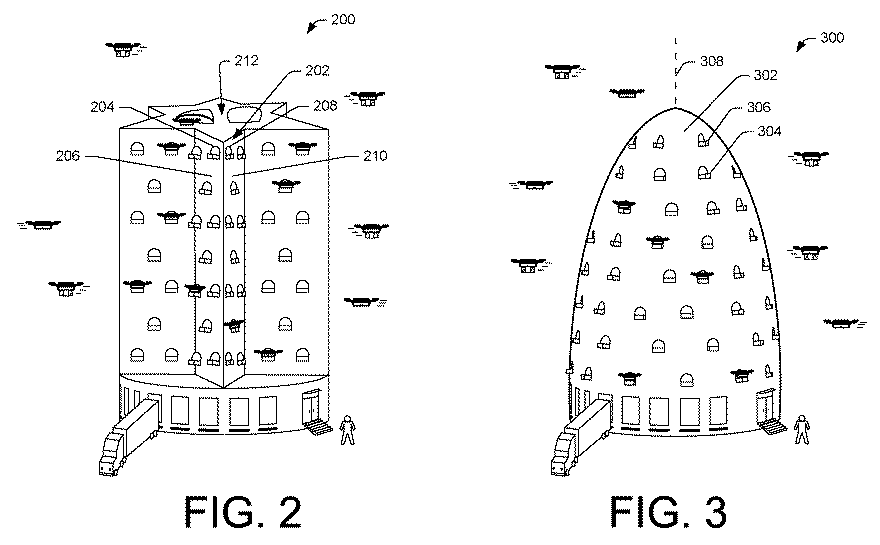 The building on the left is shaped like the Star of David. The one on the right resembles a bee hive or Jules Verne's idea of a space ship.

The reason for these buildings and why they need to be located in urban areas is described as follows:

Fulfillment centers are typically large-volume single-floor warehouse buildings used to temporarily store items prior to shipment to customers. Often, due to their large footprint, these buildings are located on the outskirts of cities where space is available to accommodate these large buildings. These locations are not convenient for deliveries into cities where an ever-increasing number of people live. Thus, there is a growing need and desire to locate fulfillment centers within cities, such as in downtown districts and densely populated parts of the cities.

Amazon currently uses its own vehicles to deliver some packages but most are delivered by UPS, the USPS, and others. The patent documents refer to deliveries being made with unmanned aerial vehicles (UAVs) and "short-term hired ground vehicles". The last part probably refers to Amazon Flex, an Uber-like delivery service that is being quietly rolled out. 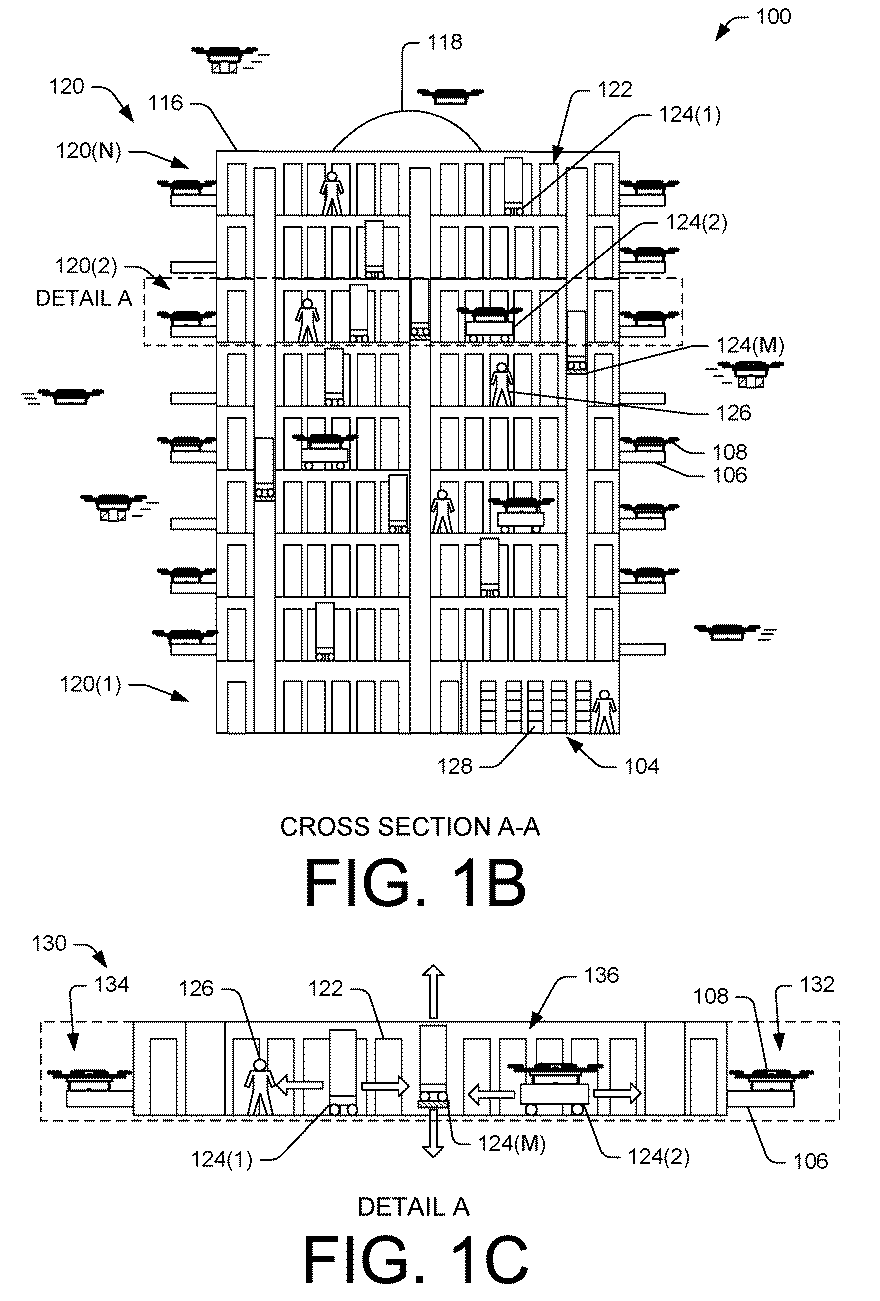 Here's a view of what might happen inside the building. Note the presence of human workers.

As for who or what will interact with the drone when it's in the building the patent documents say:

…the UAV may be serviced, inspected, powered, undergo a battery replacement, be coupled to a package for deliver, and/or otherwise interacted with prior to the next flight. In some embodiments at least some of the operations may be performed by one or more robots. 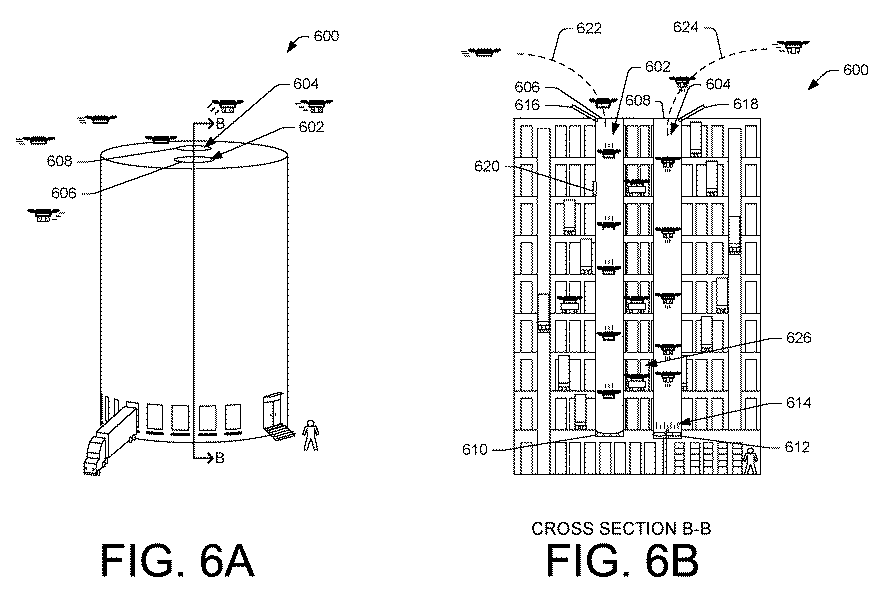 A different vision of what happens inside: drones dropping down vertical shafts like the air shafts in 19th century tenements. There are virtually no humans shown here; the work is presumably performed by robots.

This is not the first seemingly crazy idea from Amazon. It wasn't long ago that people thought drone delivery was nuts, and yet the U.S. Army and emergency service providers are on the verge of instituting it. One of the last big ideas from Amazon was a zeppelin-like flying distribution center from which drones could make deliveries—like the Hindenburg but hopefully without the fire.