[Mild spoilers ahead.] We've once again gone through last night's "Game of Thrones," lightening shots to catch invisible details. The show is broadcast to be so visually dark that it's often impossible to see what's happening on-screen.

As an example, when Euron Greyjoy's ship finally shows up, what I could see on my screen did not compare with the menace communicated by the same shot that I lightened: 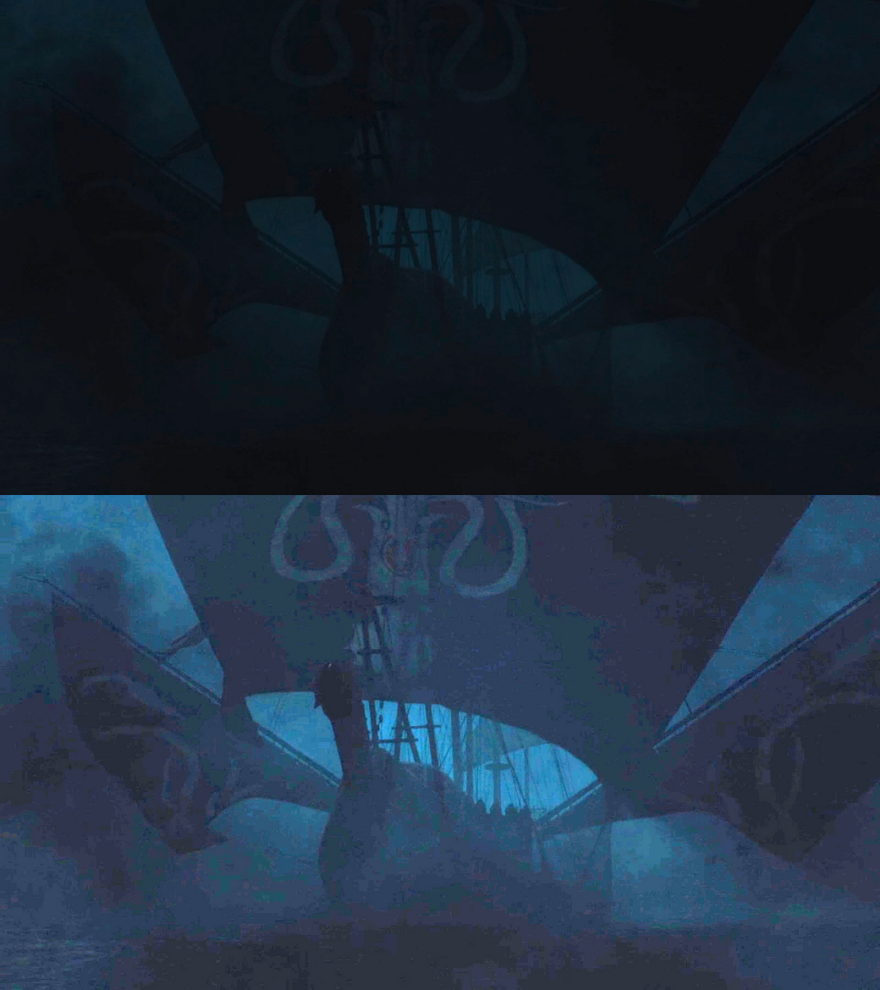 So what else did you miss? For one thing, whatever interior decorator Daenarys hired for Dragonstone should be fired: 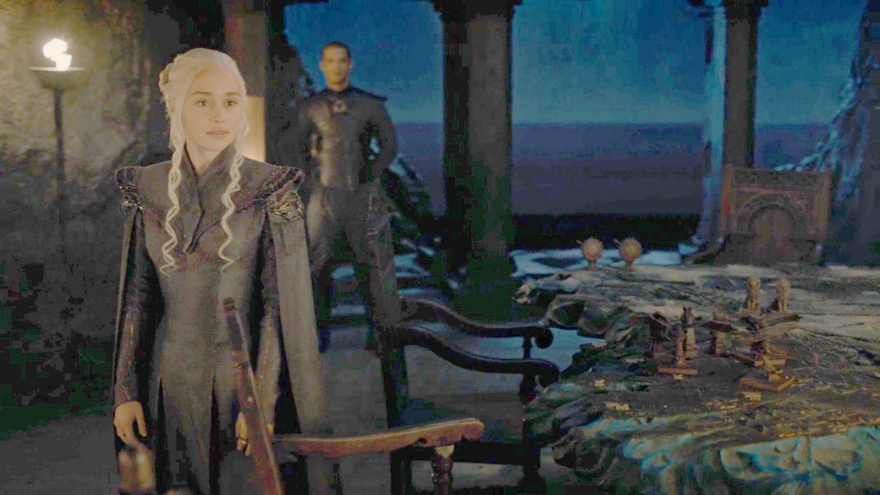 "I asked a simple question: Why don't any of these chairs match? Look at the armrests." 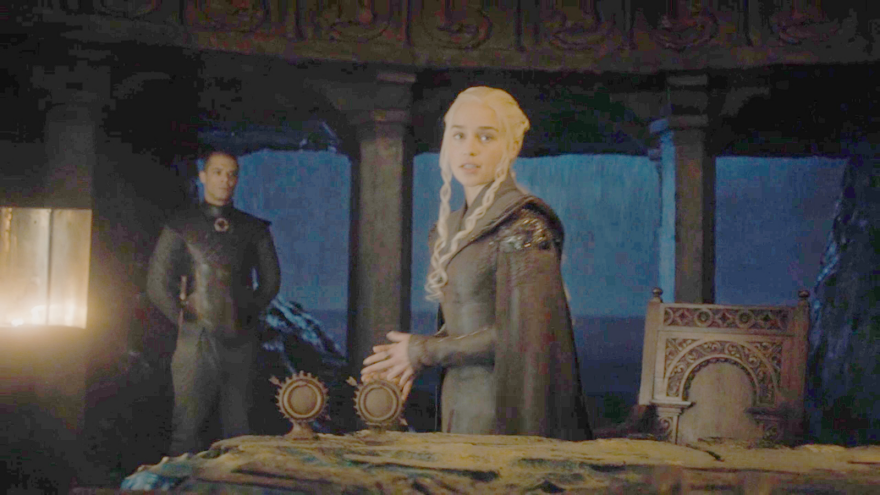 "And the backrests are all different. This one behind me has a kind of Arc of Triumph theme." 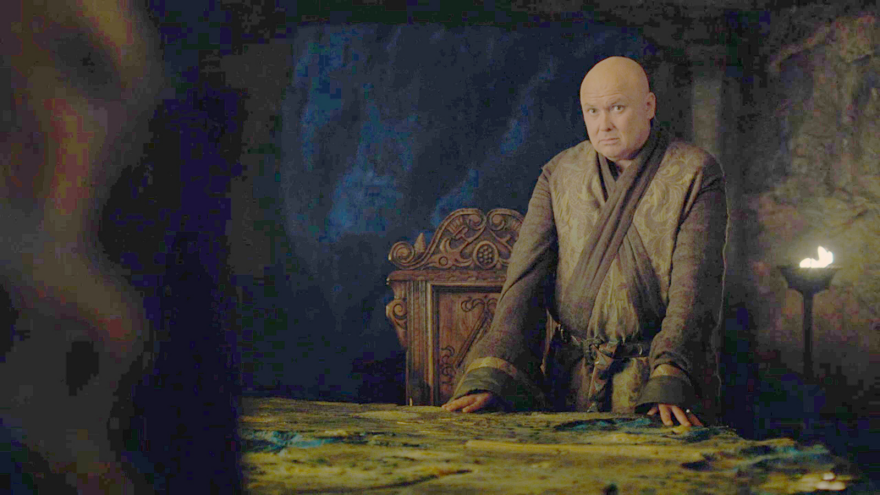 "You think that's bad? Look at the ugly backrest of my chair."

Speaking of furniture, we see that Ser Jorah Mormont, an anointed (if disgraced) knight, only rates a twin bed and a lame octagonal stool…. 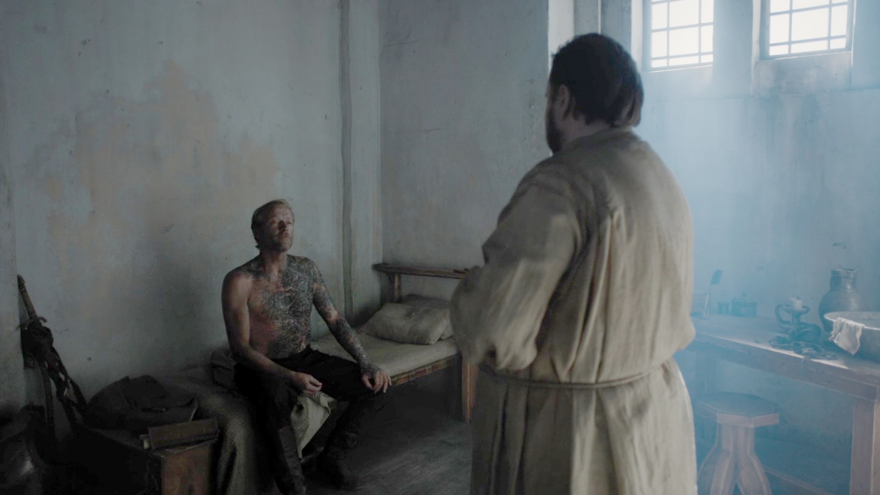 "Thank you for asking, but no, it's not comfortable at all."

…whereas Grey Worm, an orphaned Unsullied, not only gets a fancy chair… 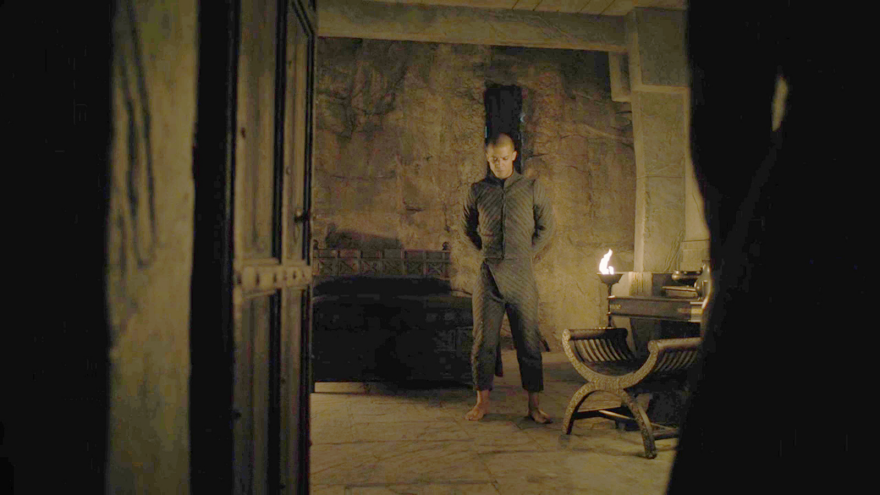 "Please don't tell the others that I sleep in quilted pajamas."

…but also gets a full-size bed: 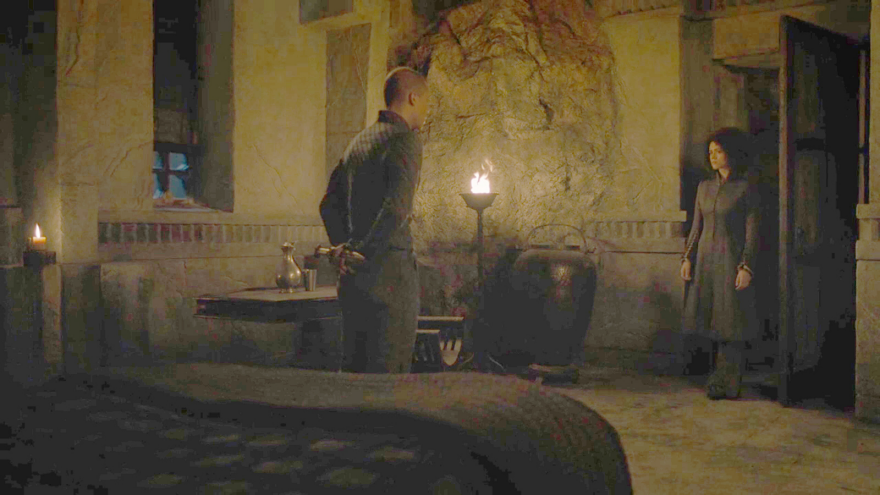 "Did you bring that Brian McKnight CD, by the way?"

Meanwhile, while sailing the Sea of Dorne, the Sand Sisters get hammocks belowdecks, and are sensibly alternating directions in order to facilitate conversation. 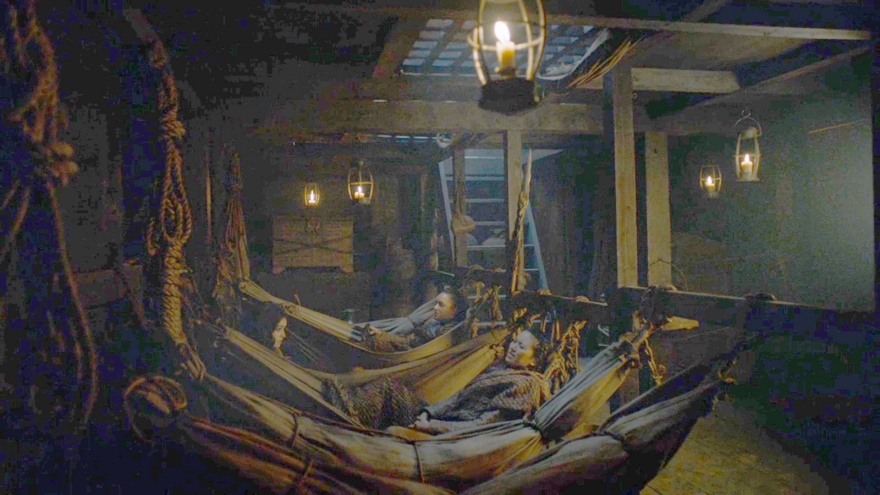 "I mean, it's comfortable for like, the first few minutes, but my chiropractor says it's not good for us."

While it's not really "furniture," over at Winterfell we see that they have these outdoor braziers that kind of look like wastebaskets. What's with the spiky protrusions up top, do you reckon that's the designer's way of saying "Hey don't put your hand here, this thing is dangerous"? 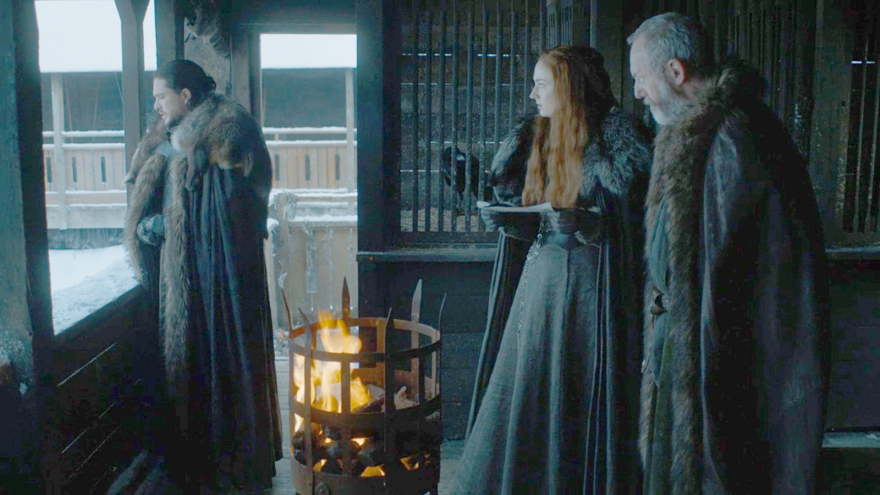 "For the last time, no, I don't want to gather around the fire and sing 'doo-wop.'"

Oddly enough the indoor braziers at Winterfell don't have the user-unfriendly spikes, but have four rings by which these can presumably be carried. 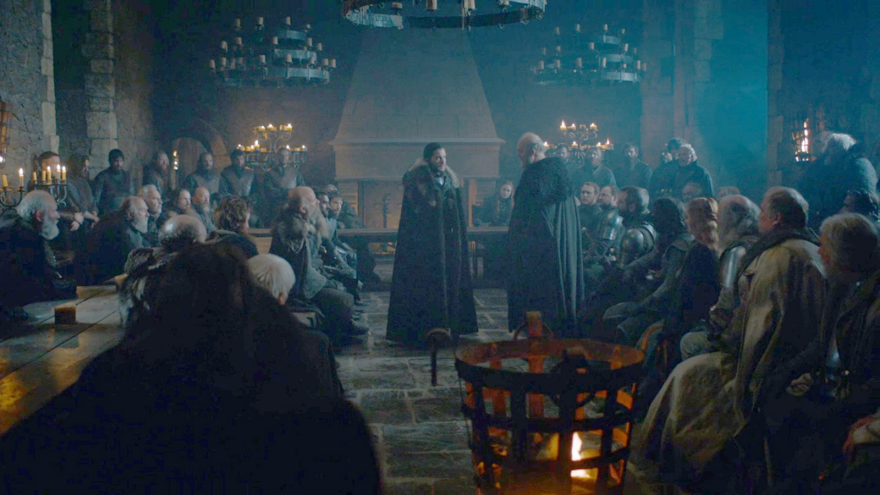 "I've already explained myself, Lord Glover. There's no need to light the overhead candles when there's this much sunlight pouring in. Winterfell is, and shall always be, CO2 negative."

The overhead chandeliers back at Dragonstone, meanwhile, have a rather user-unfriendly feature: Downward-pointing metal spikes, just above head level. 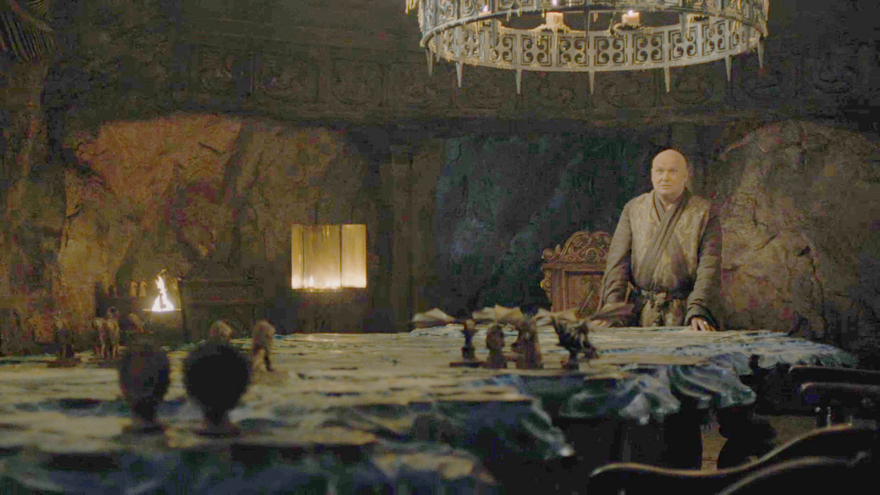 "All I'm saying is, it wouldn't kill you to cover the spikes with, like, tennis balls or something. I'm petrified that I'll get too close to the thing and slice my pate open."

The chandelier's designer has also made no provision for catching dripping wax. 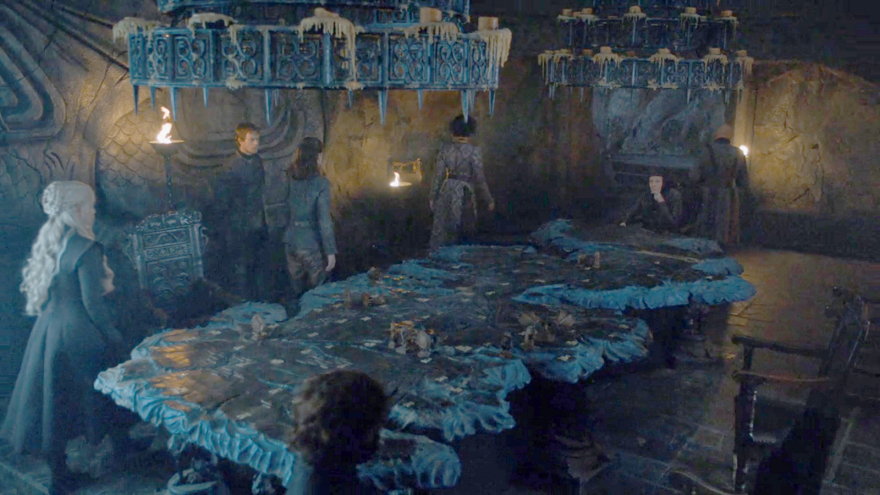 "If you guys are going to the kitchen, can you get me a spatula? I want to clean our War Map Table off."

Yellow candles, by the way, seem to be all that people can get in Westeros. 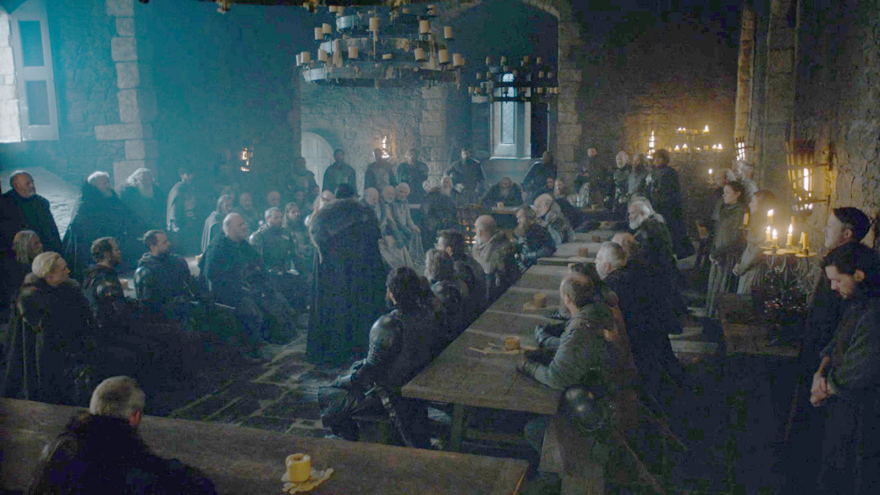 "I know a great many of you have requested the red candles, but as I've said, the Amazon page for them says 'Out of stock, ships in one to two months.'"

And this episode, we were surprised to see that the Citadel Library has parquet floors. We also get a better look at their storage methodology: Scrolls are stored up top, books down below. 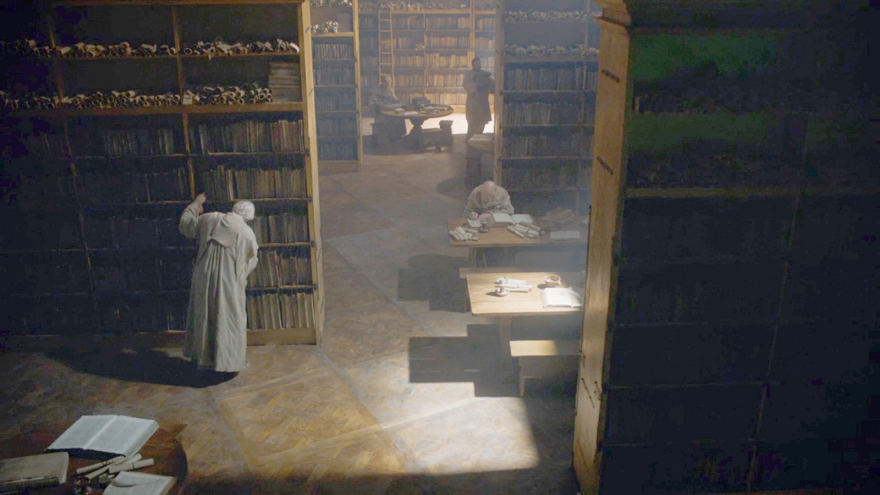 "I'm really in the mood to curl up with a good scroll, but they're too high up and I can't be bothered to fetch the ladder…ah, I guess I'll just look through the books."

And we still can't figure out what those chains on the shelves are for. 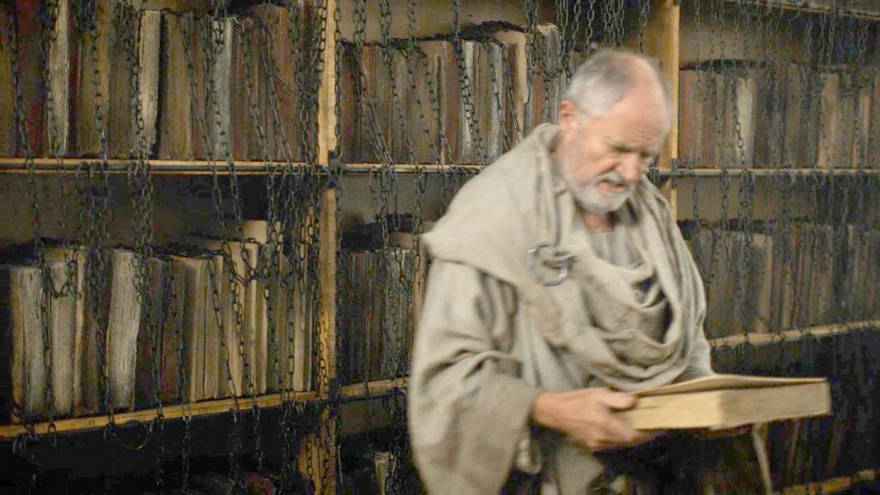 "Hmm, 'Fifty Shades of Greyscale'…don't think I've read this one before…."

Meanwhile, over at King's Landing, we get a look at the Anti-Dragon Ballistic Missile that Qyburn has been working on (and which was obviously based on Leonardo da Vinci's Giant Crossbow). 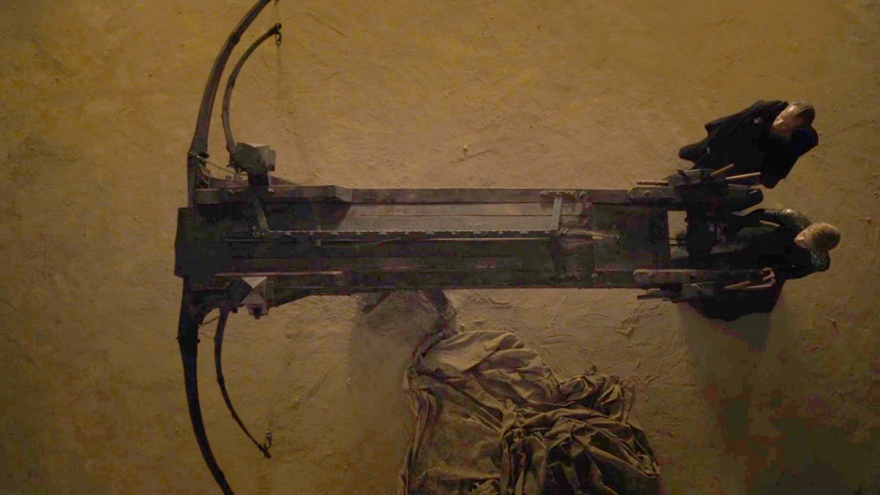 "Are you sure da Vinci hasn't patented this? I don't want, like, any legal hassles." 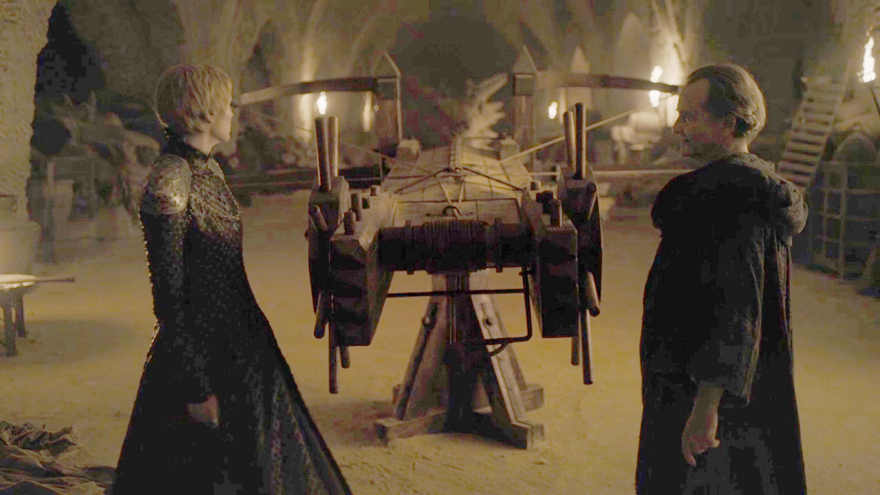 "I assure you, Your Grace, the machine is combat-ready. The only problem is that it takes three men 45 minutes to load it. Also, we forgot to put wheels on it and now it's too heavy to lift up to get the wheels under there."

In any case, we here at Core77 want to shout-out production designer Deborah Riley and all of the unsung folks in the GoT art department. We know that you guys and gals put in a lot of time to create these sets, and we want you to know that we appreciate it, even if we don't get to see it during the original airings.

(Question for fellow viewers: I am watching the show via my HBO Now subscription, and find the images impossibly dark; for those of you watching it on proper cable, are the images any lighter/more easily discernible?)