RoboCup 2007: Lord of the Humanoids 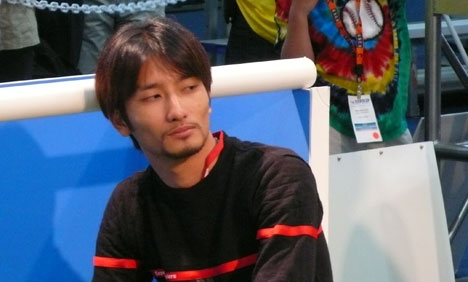 Team Osaka is favored to win the humanoid league soccer championships again this year--they walked away with the Louis Vuitton Humanoid Cup in 2004, 2005 and 2006. Team Osaka's secret weapon is Tomotaka Takahashi, one of the world's leading designers of humanoid robots. His pioneering work may make possible a dream that stands out as strange even in the strange world of humanoid robotics. A female league. 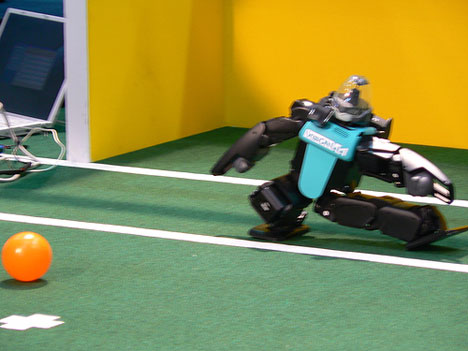 I first met Tomotaka Takahashi in Kyoto a few months ago. He had just launched what he describes as the first "female-type" robot. "Most robots are strong hero-types," he told me. "Very bulky and menacing. Good for fighting but you don't want to live with them." Robots, he believes, are the victims of gender stereotyping: people are used to seeing fire-breathing robots bent on destruction. A robot with a feminine form challenges this image and paves the way for a more intimate and peaceful future in which robots will serve as domestic helpers, receptionists, and translators between humans and machines. But first he had figure out how to hide the wires. "It is difficult to conceal all mechanics inside slender form while maintaining proper balance--most particularly on smaller feet." 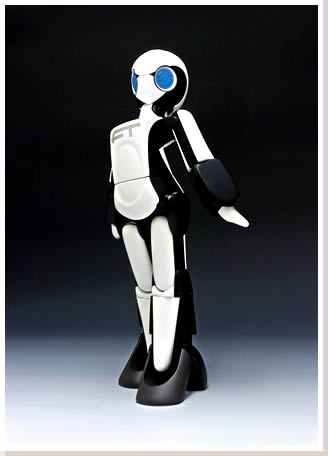 The FT's movement is definitely female-ish. It walks with straight arms swinging, knees lifting high, and a distinctive swing in its back panel. The key to the FT's movement, Tomotaka explains, is that it is designed along an "X" shaped axis pivoting at the waist, rather than an "H" shaped axis, which produces the standard robot stagger. To perfect this distinctive strut, Tomotaka observed the way fashion models move on the catwalk. The result is a robot that clearly achieves a feminine aesthetic without relating to the typical visual clichÃ©'s of dress, long hair, or purse.

But there is something slightly off about the FT. Despite the curvaceous form, despite the walk and wiggle, there remains a masculine undercurrent that only adds to the uncanny effect.

The FT was Tomotaka's pet project, and he designed and built nearly every aspect himself by hand in his small workshop located in his parent's home in the imperial city of Kyoto. It was summer, he says, and so he sat in his underwear bolting together pieces of arms, legs, and torsos, while sweating in the heat.

But the real question is: Can she play soccer?

RoboCup 2007: Lord of the Humanoids