How NYC Got Rid of a 2,400-Ton Bridge Span in an Eco-Friendly Way 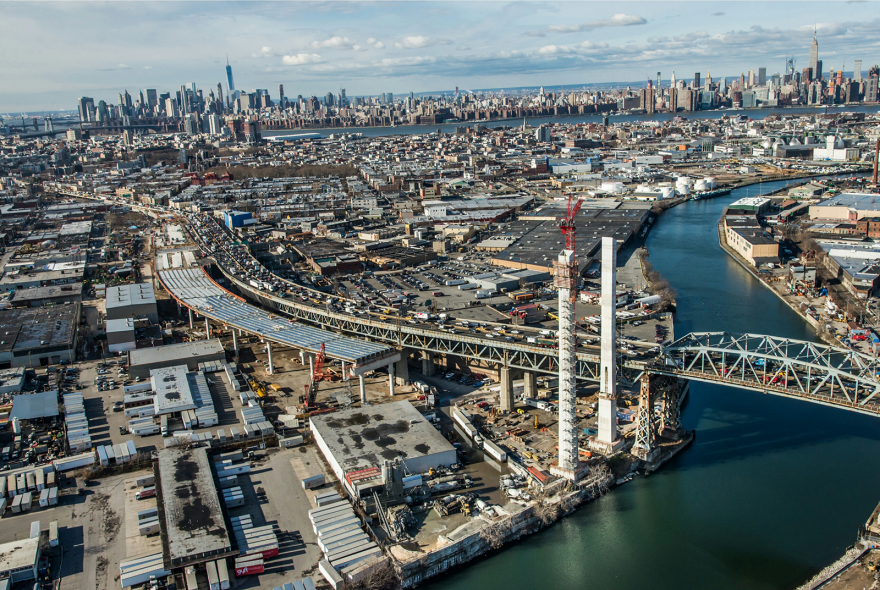 We native New Yorkers know that the best view of Manhattan is not from the Brooklyn Promenade, which only shows you downtown. The best view is from the Kosciuszko Bridge, which gives you a lengthwise view of the entire skyline. (It's the shot they use in the opening credits of the original "Law & Order.")

Alas, the venerable and un-spell-able Kosciuszko (locally pronounced kuh-SHOO-sko) has aged out, being from the 1930s. It's being replaced with two new spans, one of which has already been erected.

This raised the problem of how to get rid of the old span. Painstakingly dismantling it piece-by-piece would take forever. The alternative would be to dynamite the thing over the Newtown Creek, which would be an ecological disaster.

Instead, last week the city pulled off something clever: They cut key parts of the bridge, separating the span, and mechanically lowered it onto a barge waiting below. Here's how they did it:

Writes NYC-based UrbanTech Consulting Engineering, the "Engineer of Record" for the design of the strand jack lowering system you saw in the video:

Eight 500-t strand jacks worked in sync, lowered the 2400-ton main span of the 80 years old Kosciuszko Bridge in nine long hours. The entire operation was completed smoothly without a single glitch. Team of ironworkers from Queens and Brooklyn worked together with the management and engineering team of Skanska Kiewit and Ecco III, JV (SKE) for the past eight months in preparation for this moment. UrbanTech is proud to be part of this team.

The old span was shipped to New Jersey, where it will be recycled.

How NYC Got Rid of a 2,400-Ton Bridge Span in an Eco-Friendly Way