Traditional design flies out the window when you don't have to accommodate a transmission and engine.

We're so accustomed to the design constraints imposed on vehicles by the need to accommodate engines and transmissions that we sometimes fail to see the possibilities when those mechanical elements are no longer required. 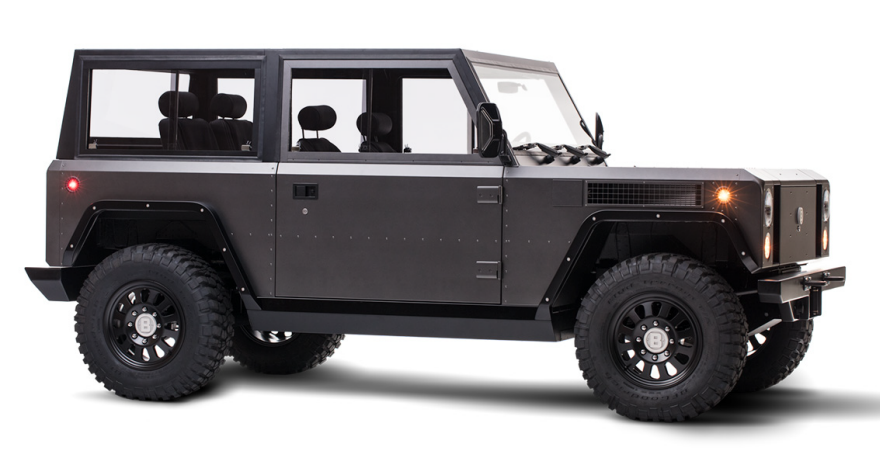 That can't be said of the folks at Bollinger Motors, a Hobart, NY startup that is developing the Bollinger B1, an all-electric on-and-off-road sport utility truck (SUT). From the outside it looks like an old-school off-road vehicle from Land Rover or Jeep, but inside it is very different. 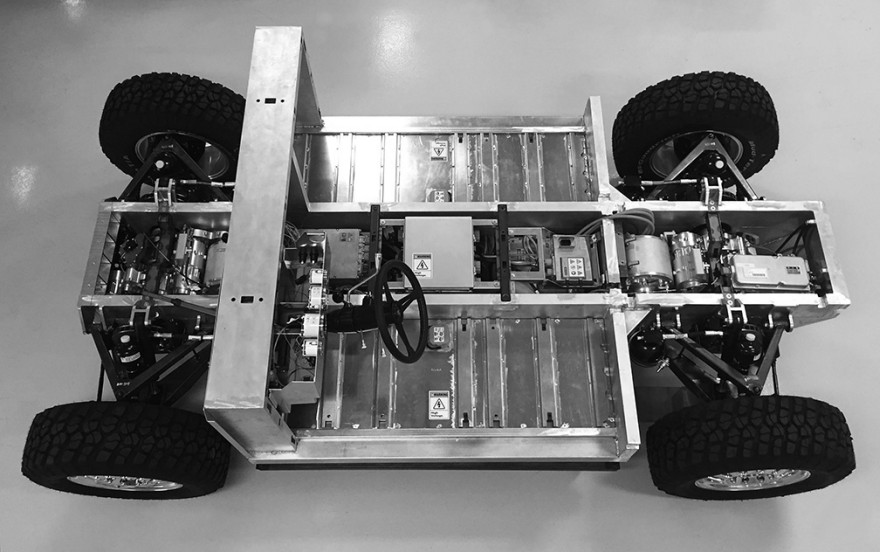 B1 chassis minus the batteries.

The motors and batteries in an electric vehicle don't need to occupy the same space as an engine and transmission. In the Bollinger B1 they were dropped into the plane of the chassis—as is typically done with electric vehicles.

Storage front and back.

This makes for a low center of gravity and allows for creative use of space in the area that would normally house the engine. The floor of the B1 extends from the tailgate at the back of the vehicle to the tailgate in front. That's right, a truck with tailgates at both ends! 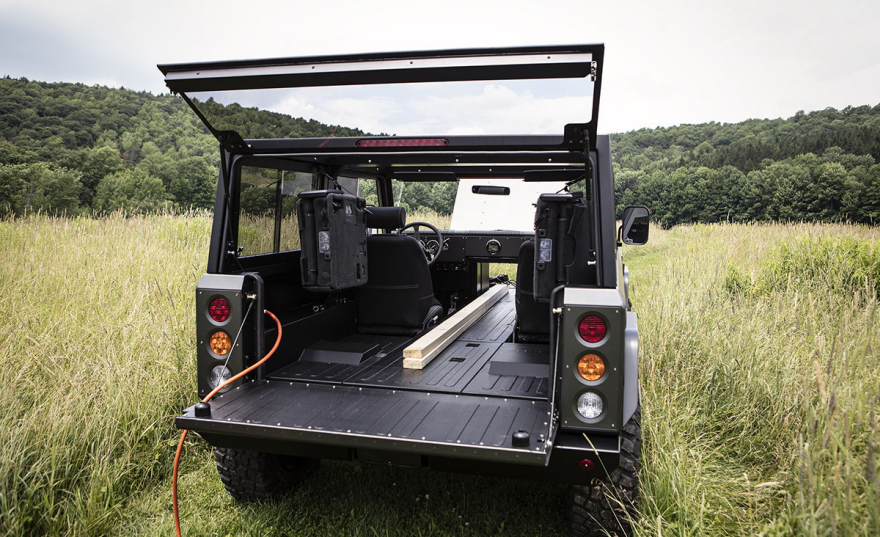 An opening through the firewall allows long material to be carried inside the vehicle. In this photo the rear seats have been folded to the sides to get them out of the way.

What would normally be the engine compartment was turned into a sort of trunk, with a lid that lifts up and a tailgate that folds down. An opening through the "firewall" separating the forward trunk from the cab makes it possible to stow 12' material in a 12' 6" long vehicle by running it from tailgate to tailgate between the seats. Longer material can be carried if you are willing to drive with one or both tailgates down. The rear seats can be removed or folded out of the way to make it possible to haul wide material such as plywood.

Hauling lumber to a remote location and then using the vehicle's battery to power the saw used to cut it.

Because there is no engine, there is no need for a large radiator and it's external manifestation, the full width grill. 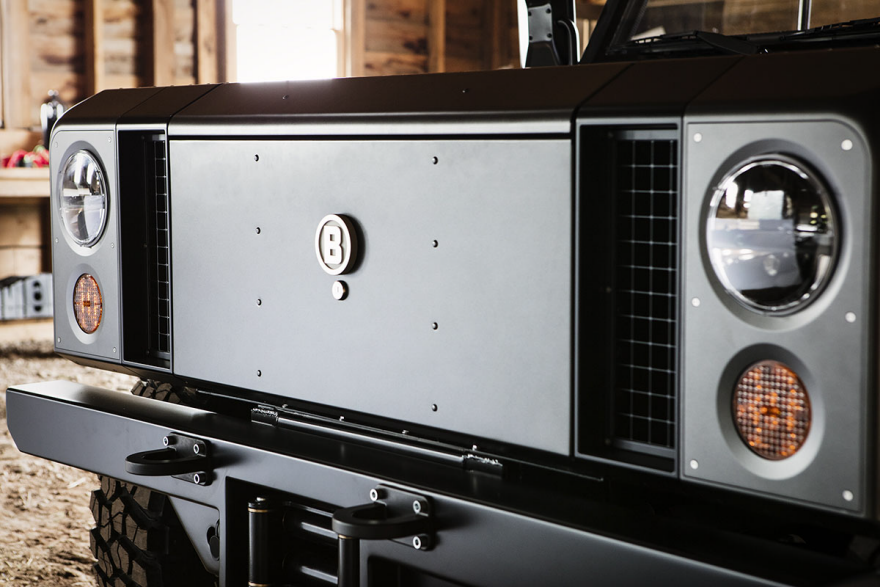 Small grills on either side of the front tailgate allow air to flow into the radiators used to cool the motors and inverters.

Instead, the front tailgate is flanked by a pair of small grills, which allow air to flow through radiators used to cool the inverters and electric drive motors. It's all-wheel-drive and there is a motor at each axle. 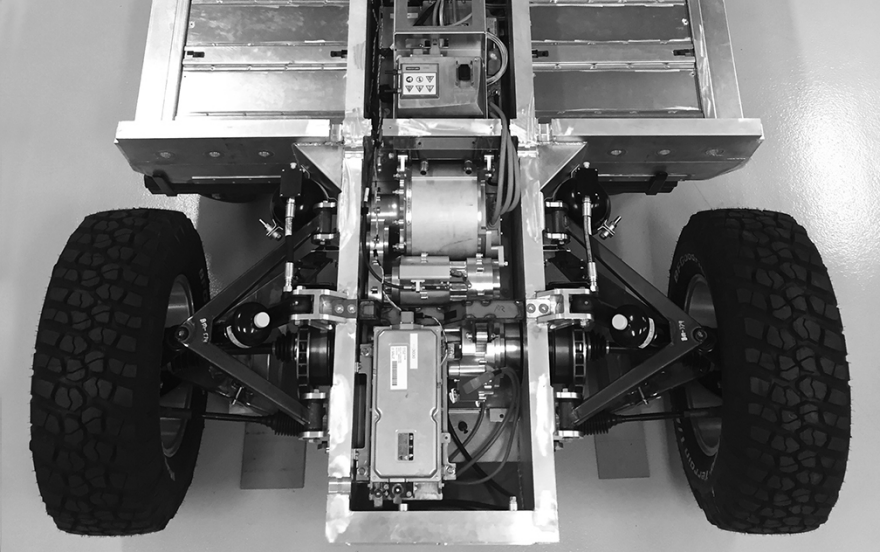 Motor at  rear axle; there's another like it at the front.

The B1 has a boxy body with a stripped down back-to-basics look. 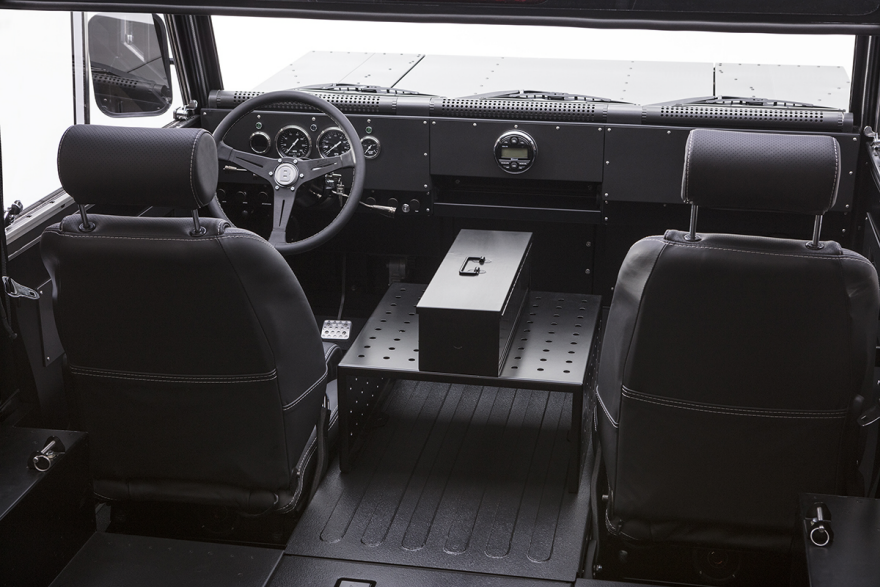 As with many off-road vehicles, the rear roof and sides can be removed to turn it into a sort of convertible or open-bed pickup. What's cool about the way Bollinger did this is that with the roof and sides out of the way the rear "wall" of the vehicle can be shifted forward to close off the back of the cab.

Changing from full cab to half cab configuration.

Of course there's more to the B1 than an unusual body configuration; it's a high clearance all-wheel-drive vehicle capable of going anywhere an off-road vehicle can go. And it does this using electric motors and batteries instead of an internal combustion engine. An electric vehicle may have limited range but its acceleration is stellar, due to the high torque produced by electric motors. The vehicle produces 360 hp and is capable of speeds up to 127 mph.

The B1 will be offered with battery configurations that allow for a 120 or 200 mile range between charges. It takes 7-12 hours to charge fully depleted batteries with 220-volt AC current. That time can be compressed to 75 minutes if the battery is charged with a quick-charging (CHAdeMO) system. The charge can be used to power the vehicle or anything (like tools or appliances) plugged into it.

It's unclear what this thing will cost or when exactly it will be available. Bollinger Motors plans to produce the B1 in the U.S. and begin shipping it in 2019.