I'm a big fan of the desert and have been to Death Valley a number of times. At the ruins of the Harmony Borax Works, not far from the visitor center at Furnace Creek, are two of the original wagons used to haul borax to a railroad 165 miles away.

I never paid much attention to them because they looked pretty basic, axles and wheels with heavily built cargo boxes on top. It was not until recently that I realized what a sophisticated thing a borax wagon is—particularly, the wheels.

In the video below you can see the crew at Engel's Coach Shop in Joliet, Montana build wheels for a replica of the 20-mule team wagons used in the 1880s to haul 36-ton loads of borax from Death Valley to Mojave, CA—which oddly enough is the location of the spaceport where Elon Musk and others are developing reusable space craft.

As a woodworker, I appreciate the craft that goes into making wagon wheels. But my admiration of them goes beyond that. The spoked wheel was developed through trial and error over a period of thousands of years and represents a highly evolved technology. 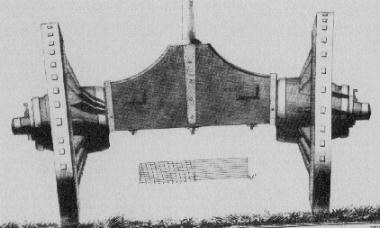 Dished cambered wheels on an 18th century limber (used to haul cannons). From This Old Wheel.

The wheels on the borax wagons were cambered (tilted away from the body at the top) to allow for a wider cargo box (the tires on autos are cambered to make them easier to steer). As with other heavy-duty wagons, their wheels were dished, a geometry that increases strength and resilience by providing a bit of spring.

The rear wheels are large to make the wagon easier to pull (takes less mule-power) but the front ones are small, so they won't hit the body when making tight turns. Nothing you see on a borax wagon happened by accident; every detail was thought out.

The wheelwrights at Engel's Coach Shop have all sorts of modern tools. Imagine what it would have been like to build these wheels using mostly hand tools.

If you're wondering why people went to so much trouble to haul borax across the Mojave Desert then look around you, because many nearby objects contain borax or were made using borax. Borax is not just a laundry detergent booster; it's a vital component of ceramics and glass—such as the LCD screen you're reading this on. It's is in fiberglass insulation, PVA glue, fire retardant, and pesticides. And it's used in hundreds of chemicals and industrial processes.