How to Hand Drill Holes in Stone and Concrete

The star drill passed through some odd and humorous intermediate stages on its way to becoming the electric rotary hammer.

A star drill is a specialized chisel used to make holes in stone, concrete, and masonry.  Drilling holes with this tool involves hitting it with a hand-held sledge, slightly rotating it, and then hitting it again. Do this enough times, and you will eventually create a hole. 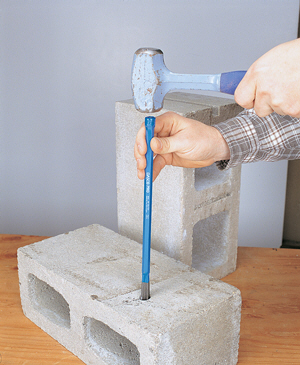 How to use a star drill. It's hard to find a photo of one of these things, much less a video.

You can still buy star drills but few people today would consider using one, not when electric rotary hammers are available for drilling concrete and masonry. A rotary hammer uses a motor and gears to replicate the hit/turn/hit/turn action of a star drill. Only it does it faster and with less reliance on muscle.  The pneumatic rock drills used for mining do more or less the same.

Interestingly, rotary hammer bits frequently have the same cross shaped tips as the star drill—but made from carbide instead of hardened steel.

In between the invention of the star drill and that of the modern rotary hammer were some interesting manual solutions. The person who devised the hand-powered machine in the video below had a sense of humor or was extremely literal in his thinking—along the lines of "if drilling holes by hand requires a hammer then doing it with a machine must require them too".

A manual rock drill designed by a literal minded inventor.

The gif below was pulled from an animation of an older DeWalt electric rotary hammer. Mechanisms vary from tool to tool but what it shows is illustrative of what happens in nearly every modern machine. The drive piston is separated from the flying piston by a cushion of air, which prevents the motor from being damaged by isolating it from vibration that would be transmitted back from the bit.