Here's the case against

For the past couple of decades, the adjustable mouth has always been on the laundry list of features a plane should have. For example, in an article in Fine Woodworking #171 by Chris Gochnour on shoulder planes, one big complaint he had about the Clifton shoulder planes is that they do not have an adjustable mouth. What he doesn't explain is why it matters.

The real question is not if a plane has or doesn't have an adjustable mouth but what, if any, advantage are they to the user?

I'm not arguing against a fine mouth on a plane, but rather why we should care if a plane has or doesn't have an adjustable mouth, as long as the mouth it has is fairly fine. 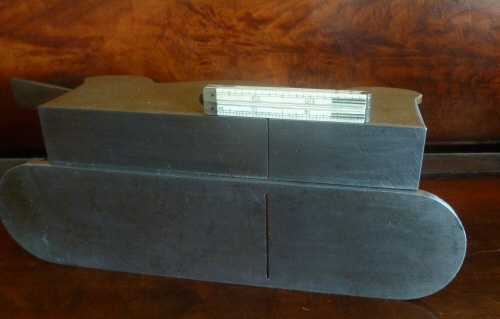 I would suggest that the only real reason for an adjustable mouth on any plane, bench, shoulder, specialty or otherwise is the ease of manufacture.

Traditionally made wooden planes do not have adjustable mouths. You will occasionally come across a well used plane where a later user has repaired the mouth of the plane and inserted a piece of wood to tighten up the mouth. But the planes weren't sold that way. Norris and other firms also made iron front plates which could be retrofitted to a wooden plane for the same purpose. But these were repairs, and once the retrofit was done to an old plane, the mouth was fixed again to a specific width.

English style steel planes by Norris, Spiers, and other makers never had adjustable mouths. Planemakers would fit planes for a fairly thin mouth, and that was that. You could "Adjust the mouth" by swapping in a thinner or thicker blade, but that required getting a new blade. There is user literature (I forget where) that suggests using a shim behind the blade near the sole to tighten the mouth of a plane or a shim behind the blade far way from the sole as possible to tilt the blade up and widen the mouth. Of course on a bevel up shoulder or mitre plane, a thicker iron doesn't effect the mouth opening.

In the wooden plane world, quality smooth planes came with very, very fine mouths and in use, as the sole and blade wore, you could either replace the blade or more likely start using the plane for less critical work and get a new plane for the very fine work. A well fitted cap iron also makes the mouth size less critical for all but the most difficult of situations, but that is another story.

For the sake of argument, let's suggest you want to make a plane with a .004" mouth (which is really fine). From a hand work perspective, it takes skill but not much else. The plane maker just makes the plane with an overly tight mouth and then skillfully widens it to whatever dimension is called for. Or you can size an iron to whatever thickness you want to. This method is reliable but also requires skilled labor. The biggest problem is that between normal variations of blade thickness and body manufacturing tolerances, making a mass production tool with a consistently fine mouth is near impossible, and in the 19th century, impossible. The steel plane makers such as Norris and Spiers (and modern makers) solved the problem by custom fitting each iron to each blade and then stamping assembly numbers on everything so that once fitted, it was easy to keep blade and body together during manufacture.

Shoulder planes by Norris, Spiers and others were made with very tight, non-adjustable mouths. The adjustable iron shoulder planes that Preston invented at the turn of the 20th century, that Record later bought out, and Clifton copied, didn't have adjustable mouths. Later versions of the same planes by Record and Lie-Nielsen did. On fixed mouthed shoulder planes of all kinds you will occasionally see planes with widened mouths but the finer the mouth of the plane the easier it is to control as it enters and exits the sides of a joint.

Part of the brilliance of Leonard Bailey's bench plane design was that it was made of easily reproduced cast iron parts that each only needed a little machining in a couple of places. The frog, where the blade rested on was just bolted onto the sole of the plane and it was adjustable so that no matter what the machining and blade thickness tolerances were, the frog could be positioned wherever you wanted to for whatever mouth wide you desired. There was no need for a skilled hand to hand tweak the metal parts to get a good fit. This allows for mass production.

If you have ever reset the frog of an older Stanley plane, you immediately find that even on a Bedrock there is enough play and tolerance in the fitting so that getting the blade square to the body can be quite finicky and isn't a five second operation. By transferring the responsibility of setting the mouth of the plane square and at the right width from the factory where it would need skilled labor, to the customer who could either do it or not, Leonard Bailey saved himself oodles of expensive labor.

The marketing argument for the adjustable mouth was and is that with an adjustable mouth, the woodworker can set the mouth of their plane to whatever opening they find suitable for the wood at hand. But in general most professionals didn't work a huge range of wood species that required changing the mouth setting, and in 30 years of collecting, using, and comparing planes I don't think I have ever found one that showed any evidence of anyone every adjusting the frog position. The only time I have ever seen stripped out screws and things is when it was on a plane were the frog was incorrectly set and someone probably tried to fix it.

This of course never stopped Stanley, the mass marketers of Bailey bench planes, to try to make it easier and easier to set the frog. First they added a screw behind the frog so you could "micro-adjust" the frog position. Then they introduced a "Bedrock" design which allowed you to adjust the frog with the plane iron in place. Back to back comparisons of the same vintage Bedrock series planes to standard Bailey bench planes give the Bedrock an edge in performance, mostly because the frog is bedded with more contact area to the sole in the Bedrock design, but you still don't see evidence outside of the company literature suggesting that anyone adjusted their frog position as a matter of course.

In general for a smoothing plane you will want to take a shaving of a couple of thou or less. If you use your plane a lot, the front edge of the mouth will wear so it's an open question if closing the mouth of the plane to only a few thou makes any sense. Also the tighter the mouth, the easier it is for a slightly out of square frog to cause trouble, and getting it perfect is time consuming. A mouth of say .010" is pretty wide from a super thin shaving standpoint, and if you look at people's planes it's rare that the mouth is set so fine. Don't get me wrong, there are cases where that's appropriate and having a super fine mouth makes sense when the blade is perfectly sharp, the cap iron set correctly, etc. But it's rare. But the more important point is that after you get your plane all set up with the fine mouth why would you ever move it wider?

The idea of an adjustable mouth being important becomes more ludicrous when you consider that the overwhelming number of Stanley planes were sold for use in construction and were used for trimming softwood on a construction site.
Modern plane makers such as Clifton, Lie-Nielsen, Lee Valley, and Wood River have the manufacturing ability to make an adjustable mouth with enough precision so it can be adjusted without needed a lot of fiddling, but that doesn't change the fact that it is far, far less expensive even today to built a plane with a user adjustable mouth, than have a skilled craftsman hand fit the mouth.

From a user standpoint is an adjustable mouth worth having anyway? The only time I have ever adjusted the mouth of a plane is when I have retrofitted older planes with newer, thicker irons. Certainly that's a reason for the old planes to have moveable frogs. But premium planes of today already come with thick irons so there is no advantage on that score.

My best plane doesn't have an adjustable mouth, and I never felt the need for one. On a bevel up shoulder plane there really is no point. A tight mouth on a shoulder plane makes the plane easier to control on entry and exit on the wood. Less hooking on and damaging the edges.

The lower cost, of course, is an important advantage to the user, but that's it.

The two planes in the picture are a late 18th century mitre plane by Gabriel and a 1920's vintage steel soled cast Norris shoulder plane. With bevel up planes a fine mouth—even on a shoulder plane cutting end grain, gives more control, but the real performance difference in steel planes is that the sole behind the iron comes to a knife edge and the blade is supported almost up to the cutting edge. Cast bevel up planes, even very good ones typically don't have this level of support and don't work as smoothly.