Game of Thrones Recap: "Beyond the Wall"

The episode starts with Jon Snow trying to give the Mormont family sword back to Ser Jorah. 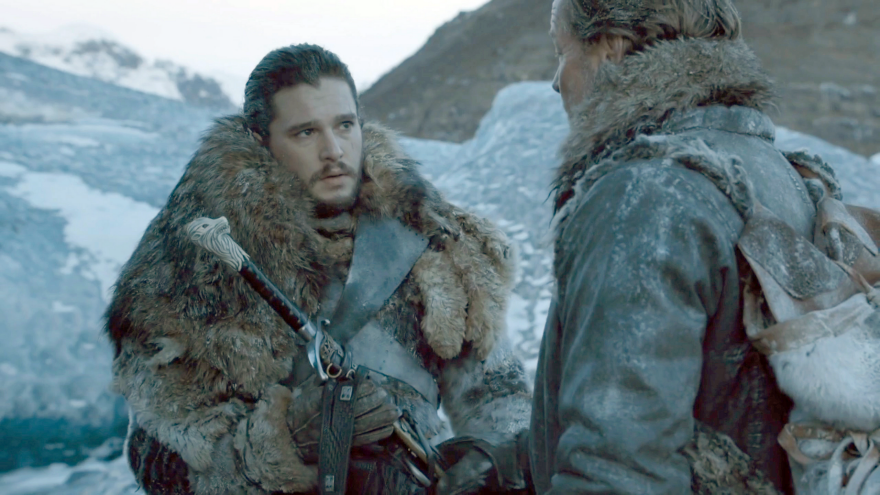 "Your father gave me this sword. I think you should have it." 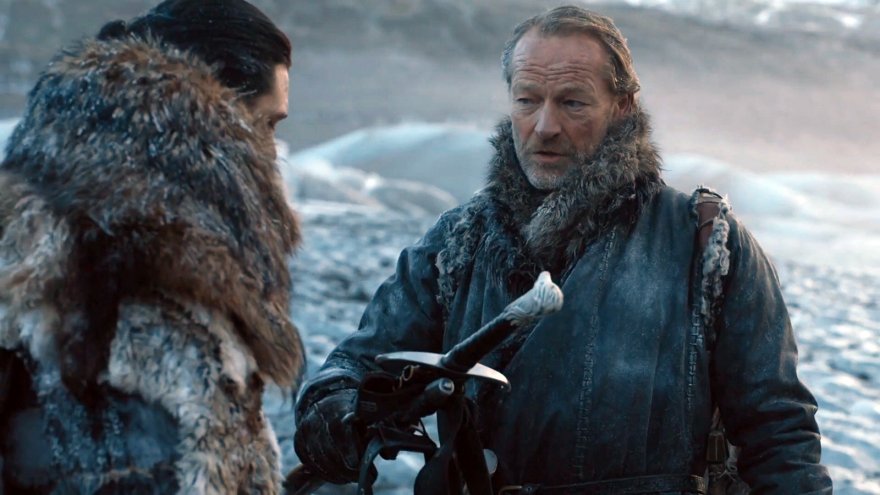 "You just want me to carry it because it's heavy. Thanks but no thanks."

Ser Jorah knows how to travel in comfort. He's the only member of the group that's lined the straps of his backpack with animal fur, for ergonomic purposes. 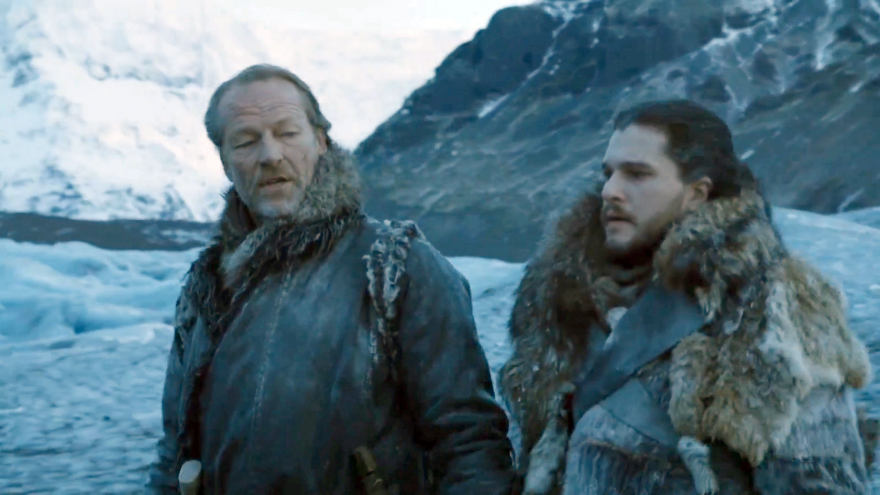 "I've got a patent. Well, a patent pending. I'm going to call them JorahStraps. The market is potentially huge."

North of the Wall is supposed to be quite cold, and the ragtag group's cold-weather clothing is, well, ragtag. 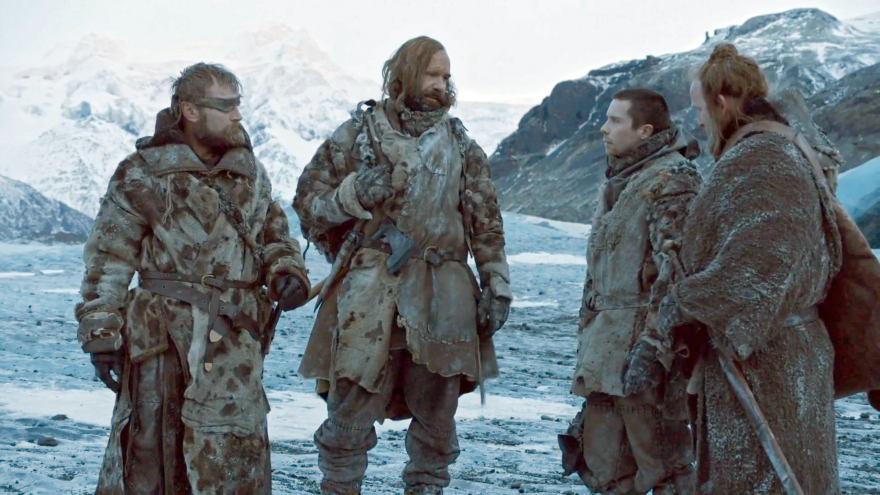 Not so Daenarys, who has a rather bad-ass cold-weather outfit. 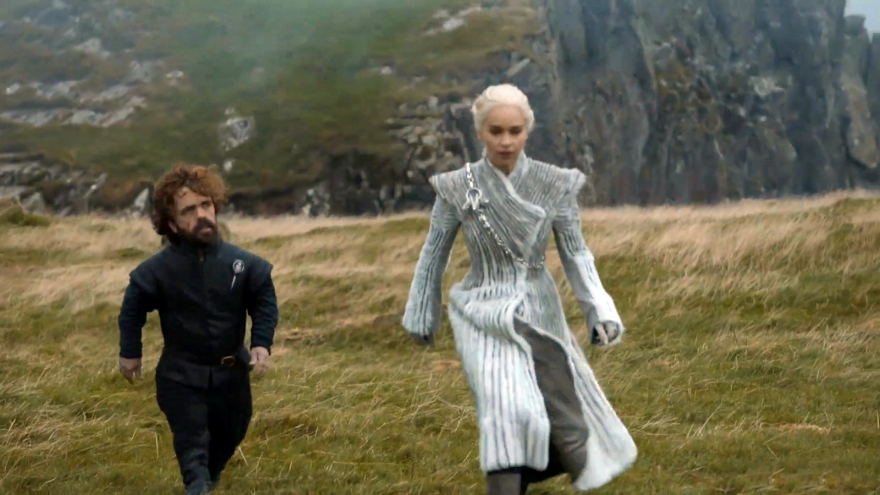 "All I'm saying, my Queen, is that if you wear it on the dragon, you won't be able to return it!" 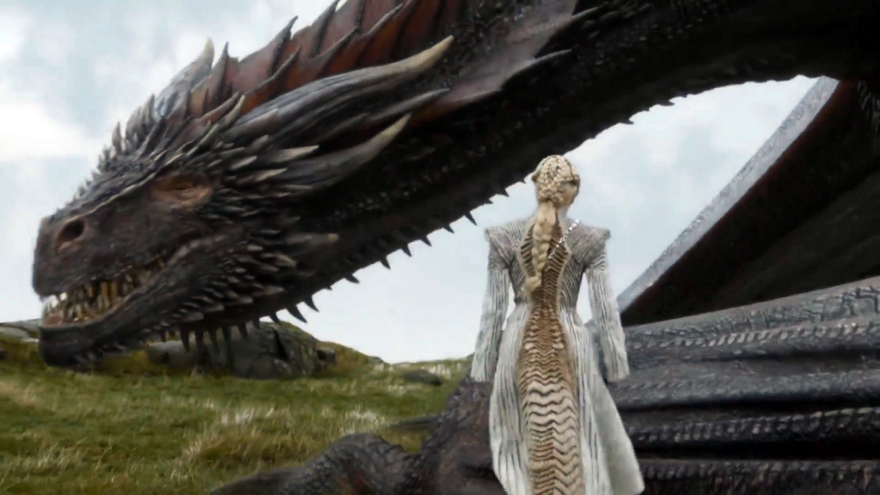 "This isn't off-the-rack, you jackass, I can't return it anyway."

As for accessories, Daenarys has either found really well-fitting gloves, or she may have contracted Greyscale. 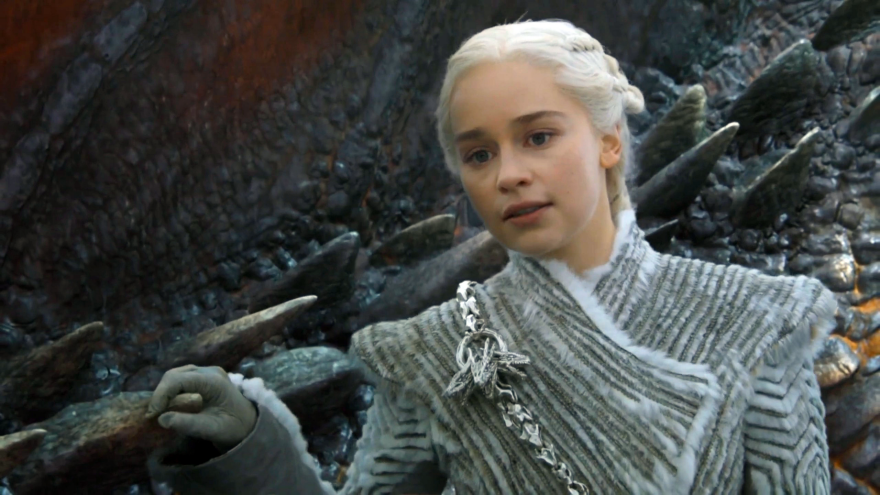 "I shook Ser Jorah's hand and forgot to wash it afterwards. He's like, 100% cured, right?"

Things don't go so well for our heroes up north, of course. They are beset upon by a group of undead and must run for their lives. 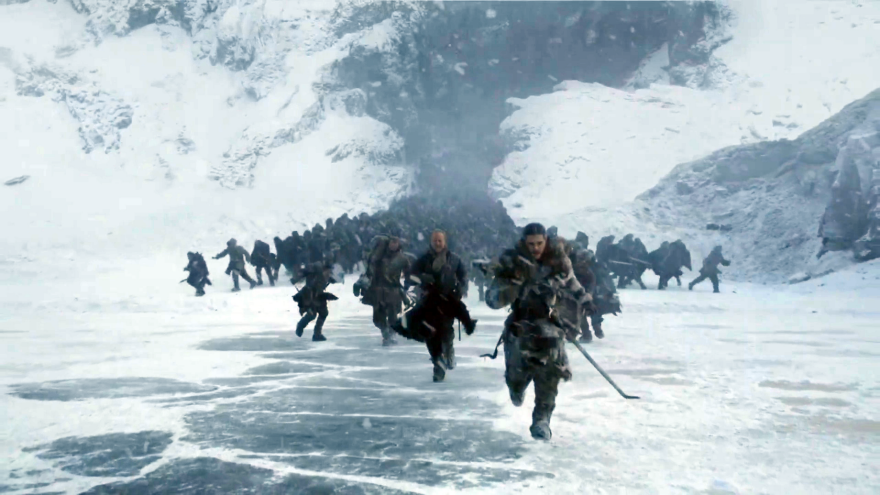 "Ha! I'm carrying this heavy sword and I can still run faster than Ser Jorah."

Eventually they find themselves surrounded. 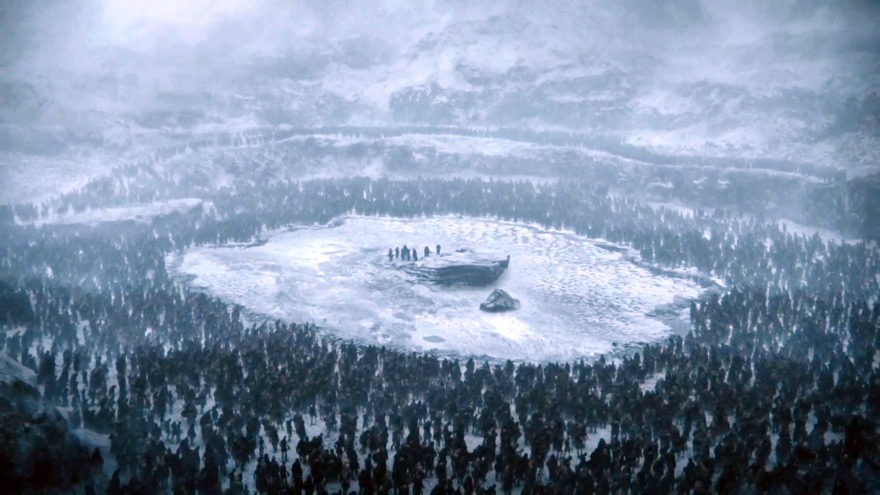 "I have to pee, but they're all, like, staring at me. I can't go when people are staring at me, even undead ones."

How bad-ass is Beric Dondarrion's flame-on sword? He'd be a handy guy to have around, not only in a fight, but for the barbecuing applications. 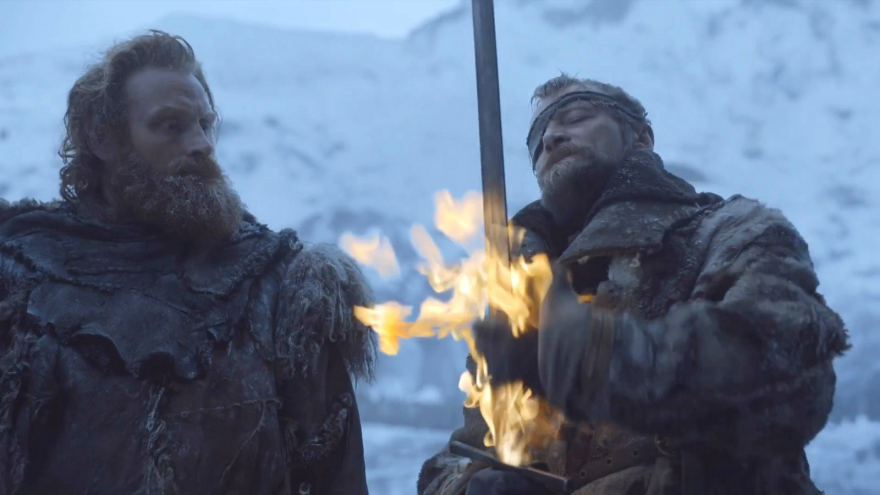 "It's not a stupid idea, Beric. If we pull a snake over your sword like a condom, then you turn it on, we've got instant barbecued snake."

Speaking of flame, when the group is overrun, Daenarys comes to the rescue. Looks like her dragons have unerring aim. 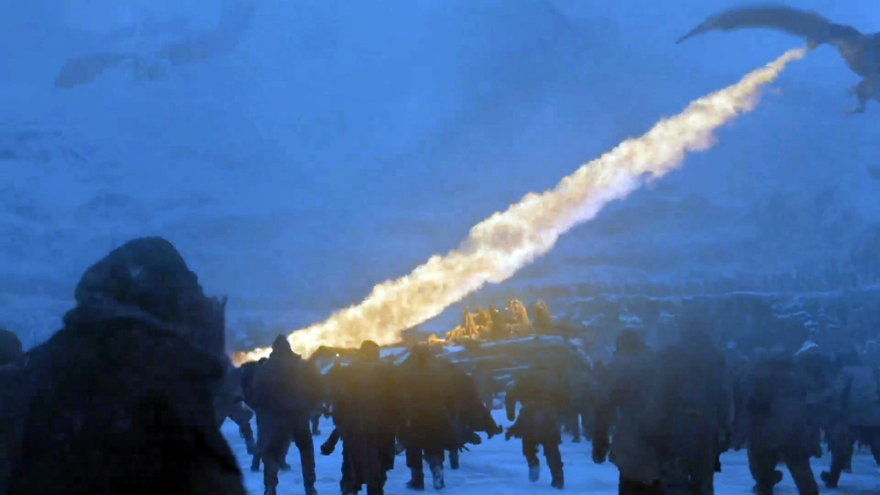 "I'm not saying I'm not grateful, but Jesus, do they have to shoot it RIGHT above our heads? I can smell my hair burning."

Unfortunately for Viserion the dragon, the Night King was apparently an Olympic javelin thrower in his past life. By the bye, it this shot you can see they're all holding their own javelins: 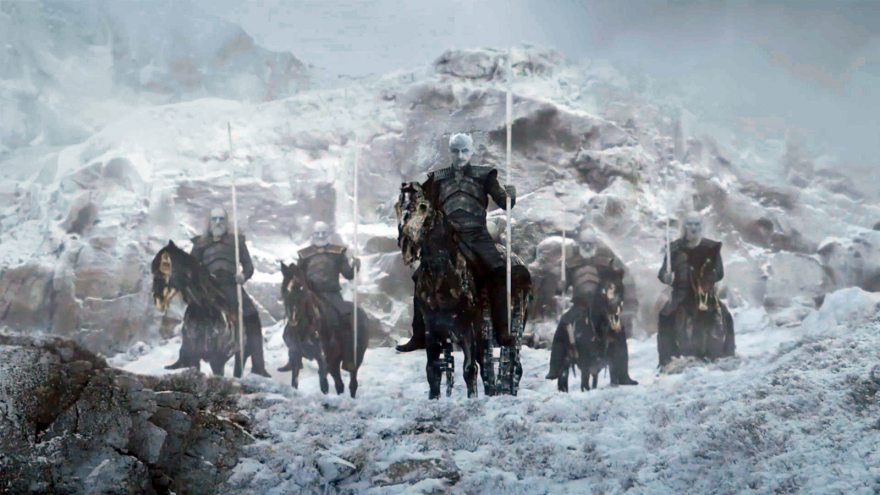 "I never medaled. It's always haunted me."

Yet someone in the Night King's crew hands him a javelin when it's time to throw it. 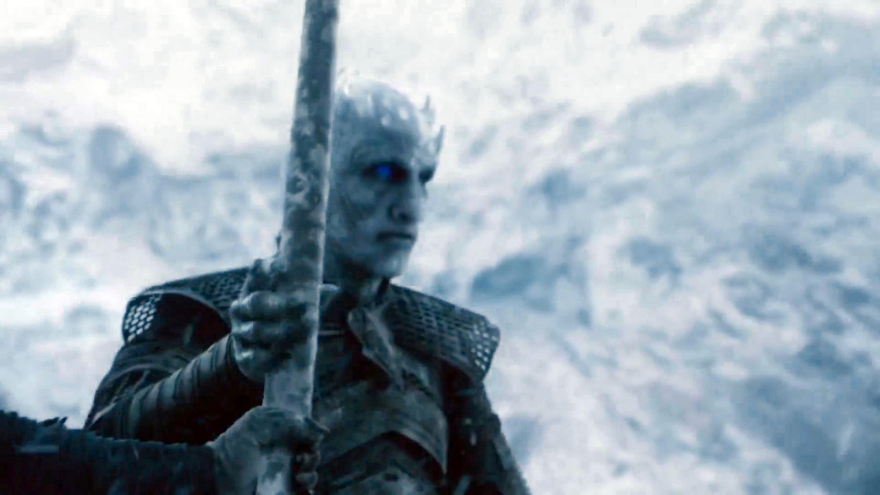 "Thank you, Charles. Mine was more expensive than yours and I don't want to lose it." 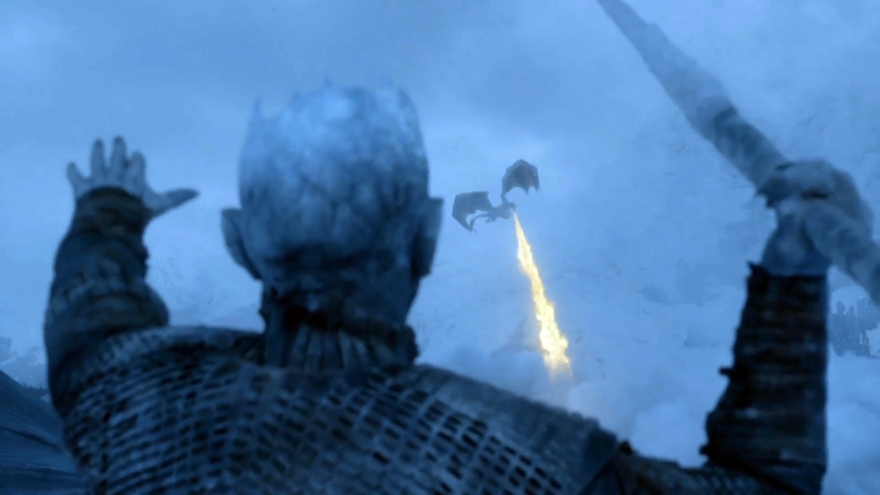 "'Not good enough,' my dad always said. Well how you like me NOW."

…and it doesn't end well for Viserion, who actually explodes in mid-flight. 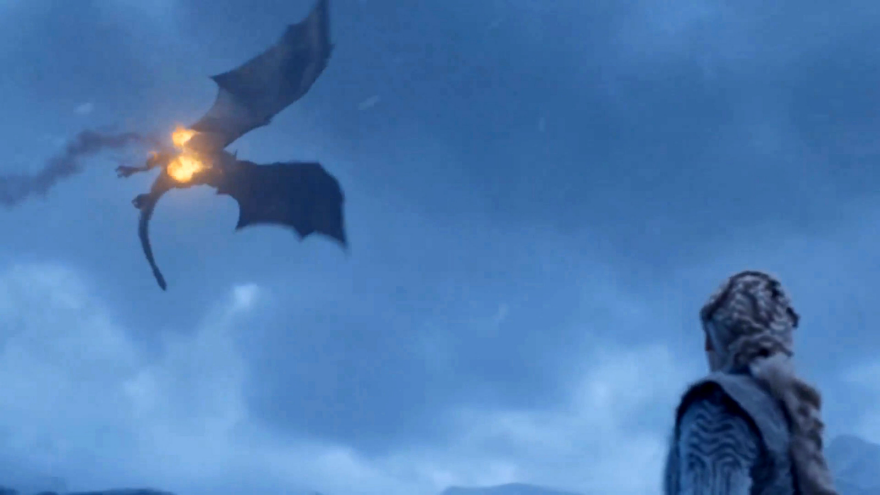 "Is that Viserion, Rhaegal or Drogon? I know they're my kids but I'll be damned if I can tell them apart. Oh wait a sec, I'm riding Drogon so that can't be Drogon--RHAEGAL! Are you okay?"

While most of the group has clambered aboard Drogon to make a hasty exit, the death of one of Daenarys' dragons has soured the moment. 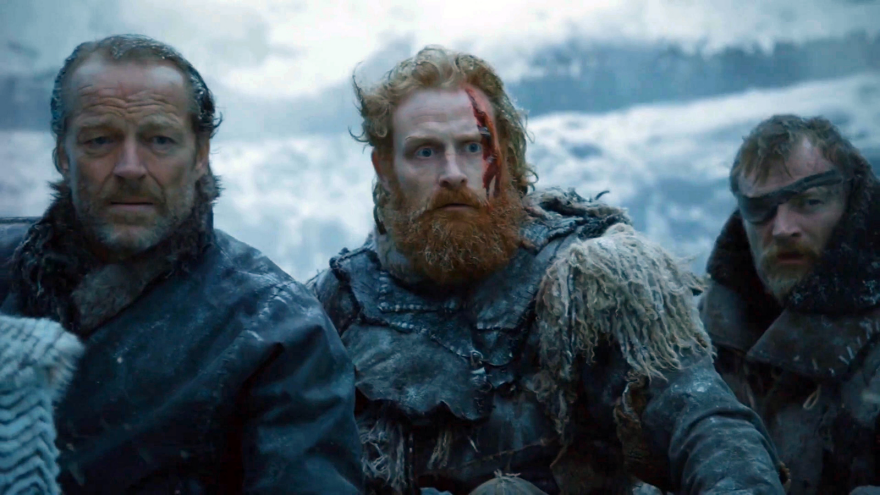 "This is our first dragon ride and now it's like, totally ruined."

They take off and leave Jon Snow behind, as the zombie version of Marshawn Lynch tackles him and sends him into the water. But as he begins to emerge from the ice, people on the internet claimed, the little lion head on the pommel of his sword opened its freaking eyes. I had to freeze-frame it to check and it's true: 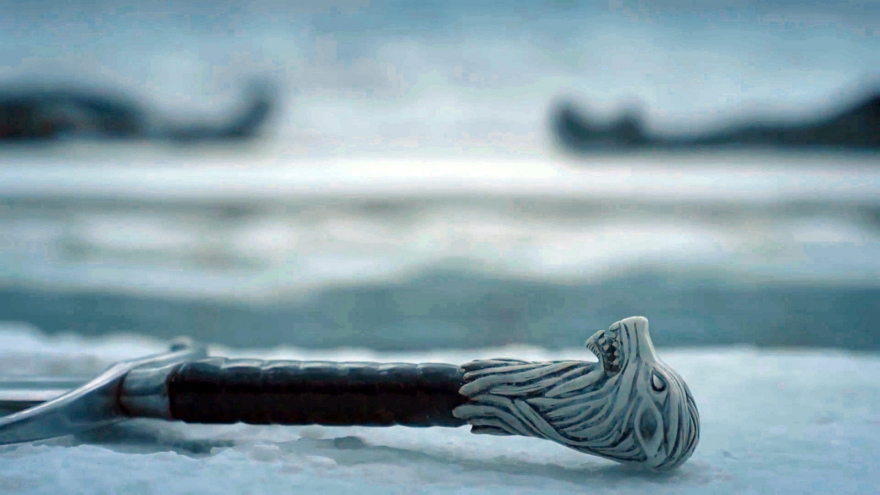 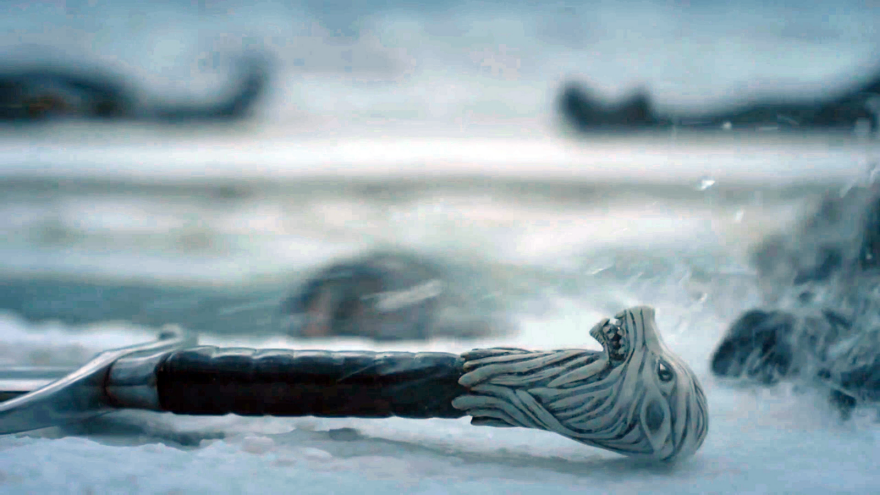 "Goddammit! I was having the best dream."

Jon is eventually rescued and makes it onto a ship to recuperate. 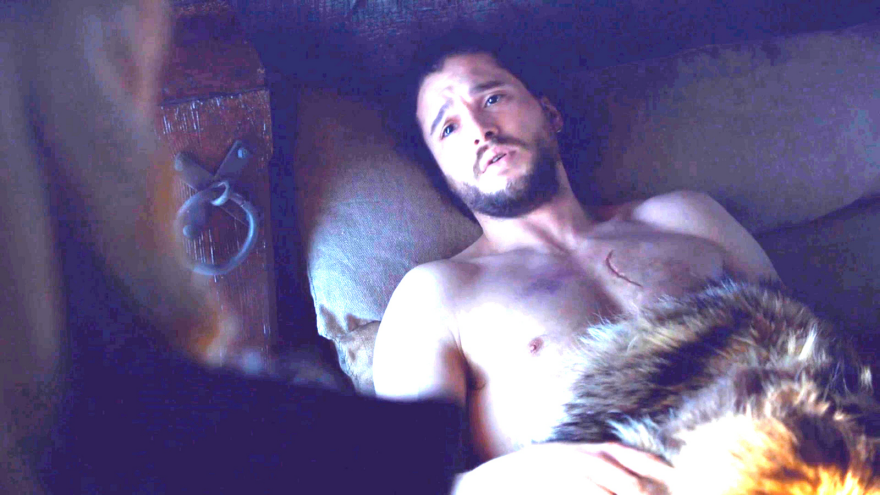 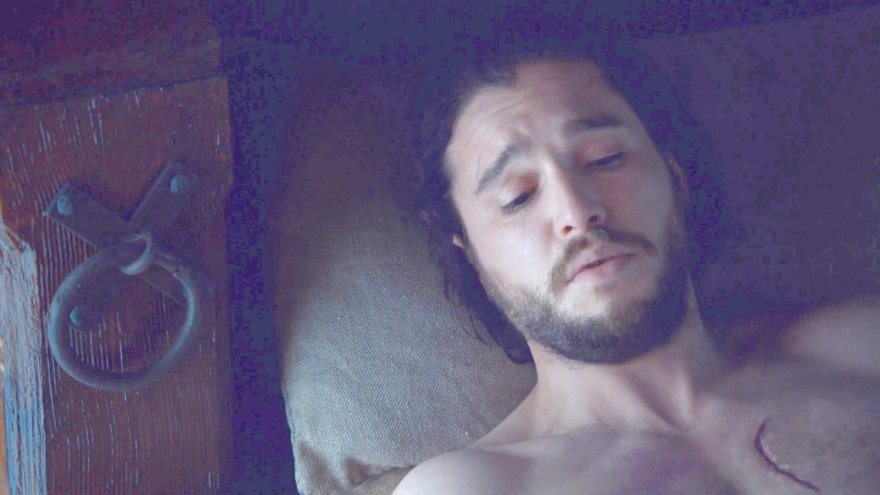 "...what this ring-thing mounted to the bedpost is."

He and Daenarys share a moment, and I have to say, for a guy who's supposedly pretty outdoorsy, his hands look super-soft. 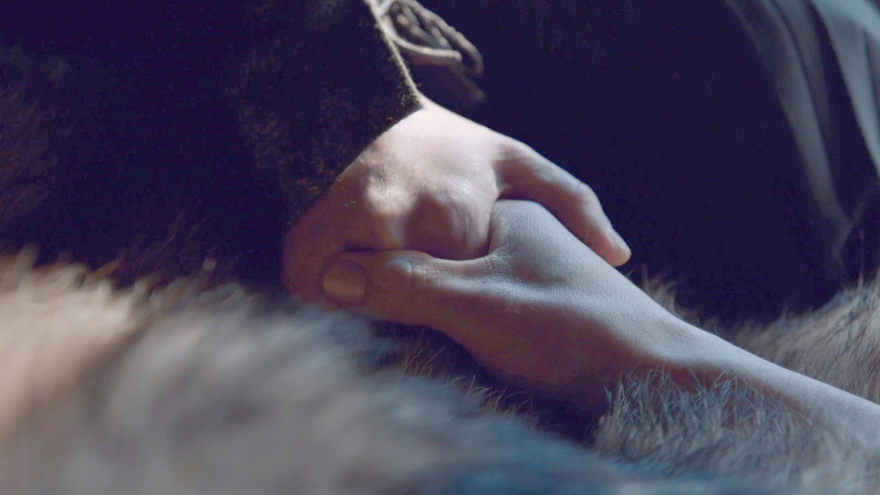 "I'm NOT being defensive, Daenarys. I'm just saying my hands feel soft to YOU because you're always grabbing onto scaly dragon spikes."

Back up north, a bit of bad news. The White Walkers have somehow managed to procure chains, and they're using them to pull the dead dragon out of the water. 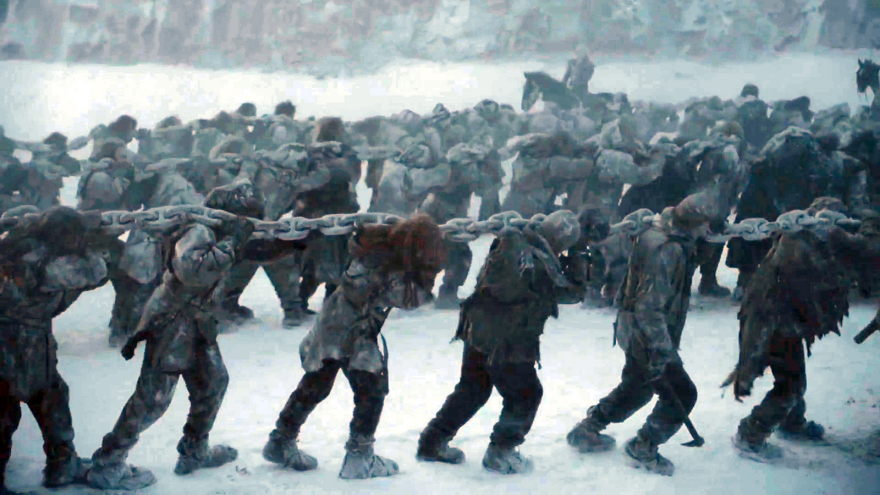 "I AM TOO pulling, Jarvis, so shut up. I bet I'm pulling more than you are." 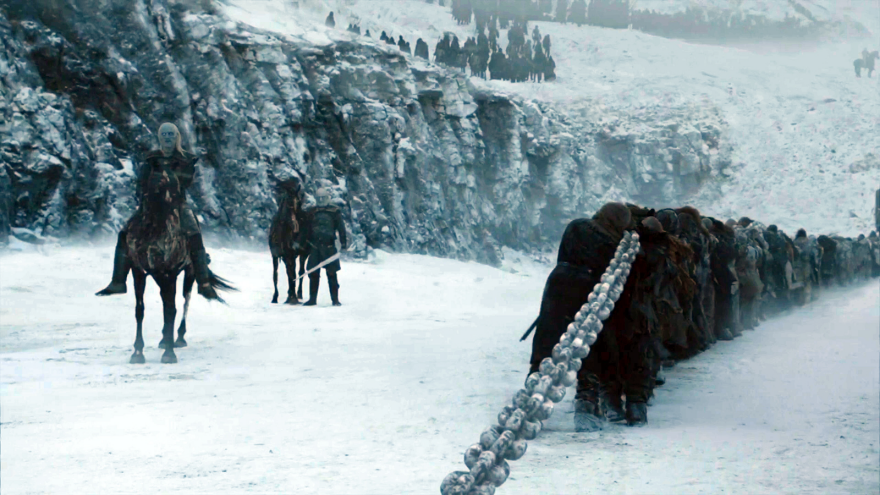 "I'd help them, but I've got that thing with my knee. It's been acting up ever since the softball game."

By the way, have you ever paid attention to the White Walkers' undead horses? They're pretty gnarly looking. 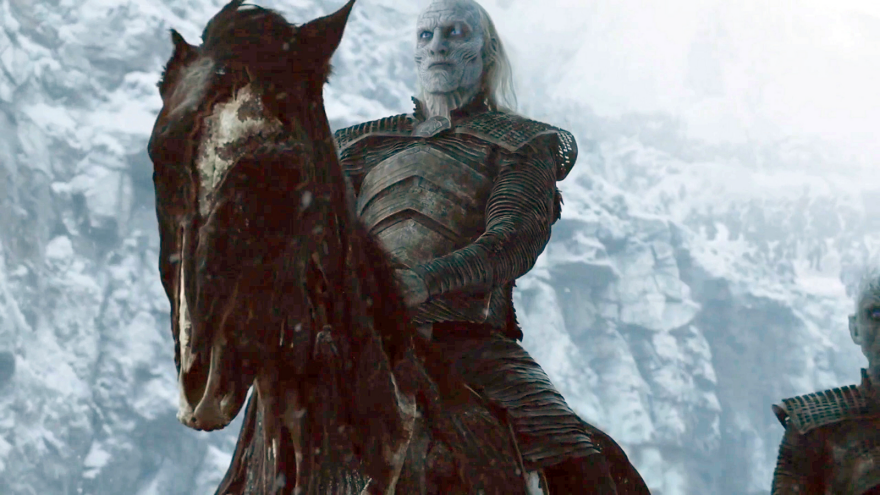 "Whoa, girl. Or boy. I can't remember which one you are. Whatever, it's not important."

Only one episode left!

Game of Thrones Recap: "Beyond the Wall"