There are two areas where designers might be able to help

Because Orb Media is a nonprofit journalism organization, they don't have to worry about pissing off advertisers or manufacturing sensational stories to attract eyeballs. Instead they can focus on their mission, which is to research and produce stories of global import. Their goal is to write about issues that affect all of us, regardless of geography and station in life.

Something that certainly affects all of us is plastics. We produce way more of it than we recycle, and we know that much of it winds up in our oceans. We also know that plastic never biodegrades, but just breaks down into smaller pieces. And what Orb has uncovered, after conducting a 10-month, six-continent investigation done in collaboration with the University of Minnesota School of Public Health, is that "Microplastics — tiny plastic fibers and fragments — aren't just choking the ocean; they have infested the world's drinking water." 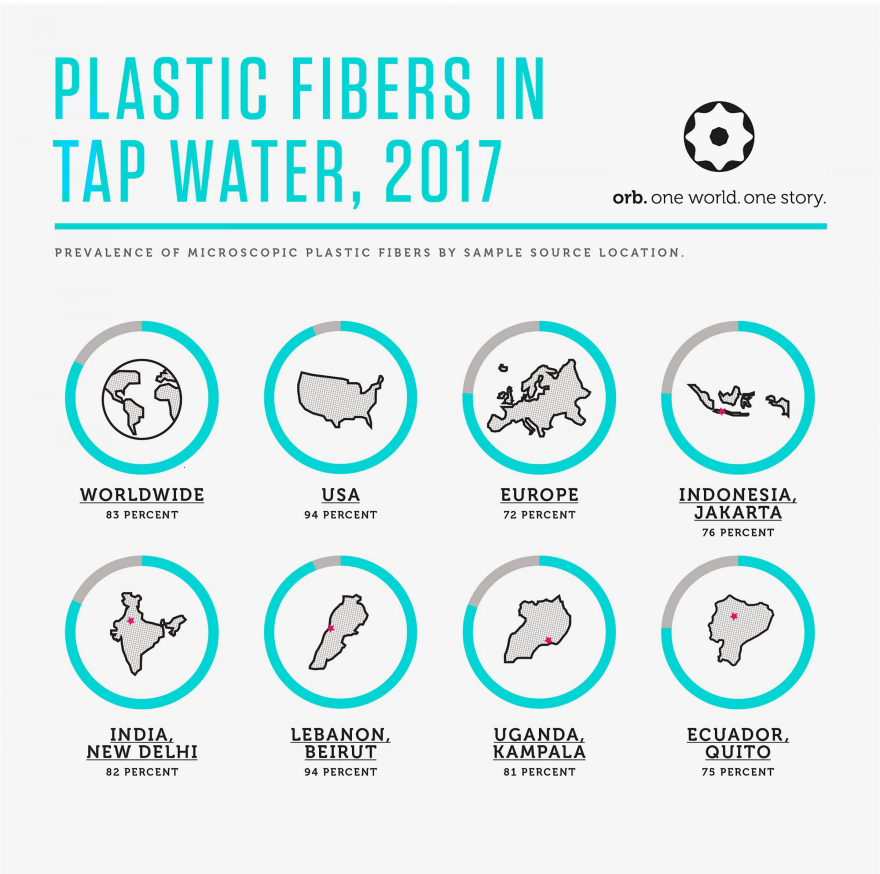 How did this happen?

The theory is that we're now so plastics-rich that it's being shed into the environment. Everything from our clothes shedding synthetic fibers to dust from paint and car tires to dryer vents. Rainwater captures these airborne fibers (which we're also breathing in, apparently) and dumps them into the drinking supply; even household wells in Indonesia have been contaminated.

Is bottled water any different?

What are the health implications?

Orb: "Plastic waste doesn't biodegrade; rather, it only breaks down into smaller pieces of itself, even down to particles in nanometer scale — one-one thousandth of one-one thousandth of a millimeter. Studies show particles of that size can migrate through the intestinal wall and travel to the lymph nodes and other bodily organs."

The Guardian: "Microplastics are also known to contain and absorb toxic chemicals and research on wild animals shows they are released in the body."

Can't we filter it out of the water?

The Guardian: "Current standard water treatment systems do not filter out all of the microplastics, [Dr Anne Marie Mahon at the Galway-Mayo Institute of Technology] said: 'There is nowhere really where you can say these are being trapped 100%. In terms of fibres, the diameter is 10 microns across and it would be very unusual to find that level of filtration in our drinking water systems.'"

So just what the hell are we supposed to do about this?

As Orb puts it, "The only way to keep plastic out of the air, water, and soil is to radically rethink its design, uses, sale, and disposal." In their article they list several potential solutions, and here are two that we, as designers, can participate in:

New Materials: Leading brands and new startups are working to design synthetic fabrics that won't shed fibers into the air and water. Bolt Threads, in California, is using proteins from spider silk to create a strong, stretchy fabric they hope will replace synthetic fleece. A Japanese company, Spiber, also plans to serve the outdoor apparel industry through spider silk. Meanwhile, startup NewLight Technologies has created a plastic called Air Carbon from greenhouse gases produced by cattle and landfills instead of from oil. "We can't say enough about this material," said Joe Burkhart of the U.S. furniture maker KI. "It really has potential to impact the world on a major scale."

Household Solutions. Designers around the world are looking at ways consumers can reduce plastic emissions. One product, the Cora Ball, catches up to 35 percent of the fibers released in a single load of laundry, before they're discharged into treatment facilities, rivers, and lakes.

Whether you're a product designer that works with plastics or not, we highly recommend you read through the entire Orb article, as well as The Guardian's take on it.