Yves Béhar is Now Designing a Smartphone for Gamers

From juicers to phones, real quick

It looks like Yves Béhar has moved on from the Juicero catastrophe and is now working with gaming technology startup Wonder to design a smartphone specifically for gamers. The company and designer announced via Twitter and Wired that they are on a mission to tackle the challenge of designing a phone for a specific target market—one that according to Wonder CEO andy Klienman are the kind of people that, "dissect the latest Game of Thrones and search for hacks in PUBG. They love music and movies, obsess over their favorite athletes and YouTubers, game anywhere and everywhere." If that description sounds like you, you could be in for a well-designed treat as early as next year. 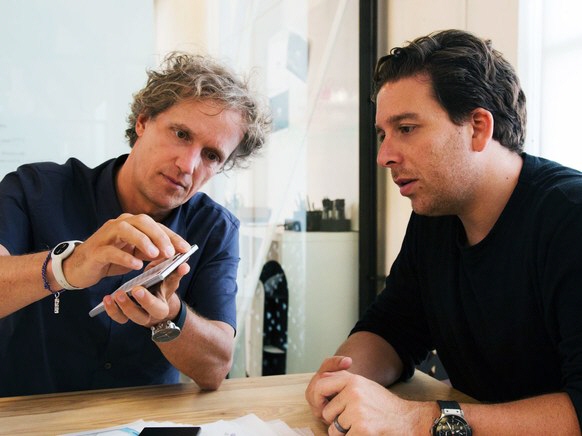 Kleinman and Béhar observing a phone together, via Wired

While tapping into this particular target market is nothing new to Kleinman, who has been developing products for this group for quite some time, Béhar initially viewed the project as a difficult challenge, warning Kleinmen that the requested mission is realistically much more daunting than it sounds.

Most mainstream phones on the market are designed with broad target groups in mind, particularly the sought-after millennial generation. Pleasing a market this niche will be a heady task, even for a power duo like Béhar and Kleinman.

At least the team has a lengthy history of gaming phones to learn from. Many companies large and small have already attempted this exact mission, including Sony and Nokia, but all have failed. Luckily, the duo seems to have a general idea of what they hope to accomplish.

Here's what we know so far:

The phone will look more professional than past gaming phones, which generally resembled toys. This is where Béhar is supposed to work his magic.

The phone won't be the only device, rather it will be the nucleus in a whole system of accessories, i.e. controllers.

Wonder will most likely be developing games specifically for this phone. Since the concept lies somewhere in-between a smartphone and gaming console, it'll need a specific type of game to make sense.

The system could end up being a subscription service. Wonder is talking about bundling up a lengthy list of hardware, including games, music, wireless service and more, into a package for around $100 a month.

Wonder is currently finalizing "Wonder Mode," a software that turns smartphones into a full-on gaming system.

We'll have to wait and see how this one goes.

Is this the future of gaming or another failed phone for gamers in the making? Contribute your thoughts to the comment section below.

Yves Béhar is Now Designing a Smartphone for Gamers