Here was the problem faced by the UK: 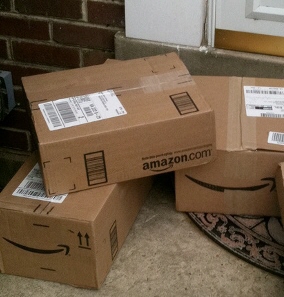 1. "The British do more of their shopping on the internet than almost anyone else in the world," according to the Economist.

2. That means a lot of packages being delivered, which requires a lot of delivery trucks.

3. The amount of delivery trucks was clogging urban streets, adding both congestion and pollution.

British municipal governments have begun to solve this problem in a creative way: Pooled delivery. By requiring competing companies to stop their trucks outside of the city limits, then consolidating all of those packages onto a lesser amount of trucks which are then allowed into the city, traffic is reduced.

Regent Street in the West End of London has cut delivery traffic by almost 80% since firms there started combining deliveries in 2008, using a company called Clipper Logistics. This in turn reduces congestion and air pollution. Camden council reckons that its scheme cut carbon-dioxide emissions in the borough by almost 3,000kg last year.

Even better, the last-mile delivery vehicles thus operate over a very limited range. This is ideal for electric vehicles that can thus remain close to their recharging home base. To encourage this kind of thinking, the city of Bath bans internal-combustion delivery vans from 10am to 6pm, but allows electric vehicles to make deliveries all day.

It's a win for the individual shipping companies, who do not have to pay to send half-full trucks out; it's a win for the cities, who have less traffic and fumes; and it's a win for the logistics companies that are hired to manage the pooling scheme. The extra costs are undoubtedly passed on to the consumer or taxpayer, but I'd happily pay a few cents extra per package to live in a city with cleaner air and less honking.