Listening in the hardest market 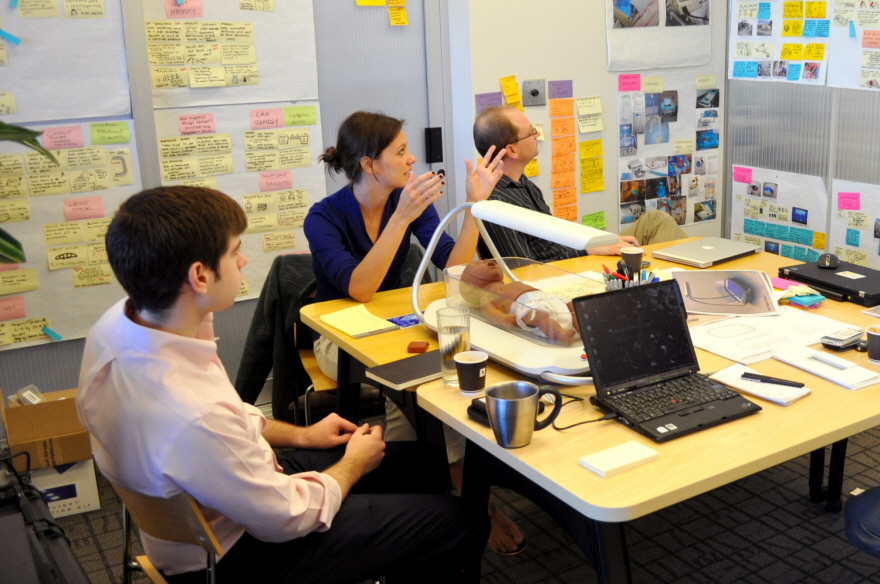 Rapid prototyping is a core human-centered design skill. Design that Matters uses prototypes to better communicate with stakeholders across languages and cultures, quickly testing assumptions to efficiently converge on a final solution. This essay includes six examples of insights we gained using prototypes and how we taught these methods to our social enterprise partner, MTTS.

4. Many Settings, or No Settings?

"Fail early to succeed sooner" is a common mantra in the product design world. When you are creating something new and innovative, you take risks. Risks that people won't like it. Risks that new technology may not work. Risks that nobody will buy it. It's important to test your riskiest assumptions early and often to avoid expensive failures. The human-centered design process (HCD) encourages inexpensive failures early in the process to avoid changes later when it becomes too expensive. One of the central tools in the HCD process is the prototype. Prototyping is a great tool for communicating ideas early to get critical feedback from end-users. In designing Firefly, prototypes bridged the narrative gap between ourselves and our users. We shared ideas early and often- this helped us work with users of a different culture and language, as well as working in a medical context with which we had little personal experience.

During the innovation process, the cost of changes only increases as the development process progresses.

During the Firefly Newborn Phototherapy design process, Design that Matters used a series of prototypes to get critical feedback from end-users while also teaching the prototyping mindset and skillset to our Vietnamese manufacturing partner, Medical Technology Transfer and Services (MTTS). We did many activities together, including a tour of Boston organizations who are leaders in prototyping, a workshop about prototyping and manufacturing techniques, and providing prototyping references. Most importantly, our manufacturing and implementation partners hosted us for field research in Vietnam. During the research, they could see firsthand how prototypes generate key insight about the real behaviors of doctors, nurses, technicians, and parents using Firefly before the design was finalized. The Firefly design experience has changed the way our manufacturer approaches design for all of their products, including their current project creating a CPAP device for infant respiratory distress.

After gaining concept feedback from our manufacturing and implementation partners as well as eighty-eight doctors and nurses at East Meets West Foundation's Jaundice Conference in Central Vietnam, we created an alpha prototype. This prototype had "looks-like" aspects of our chosen design: a small and thin top light to provide phototherapy while still allowing good patient visibility, a large base light and a removable clear baby bed, called the bassinet, which would hold the baby right over the light. For lighting, we worked with a noble DtM volunteer who quickly wired together some generic blue LED lights and some white lights to three buttons. Separately, we created a series of concept button graphics and button configurations that could control the lights in different ways. We also brought along a life-size newborn doll for people to simulate use with the prototype. The insights we gained by showing the Firefly alpha prototype to doctors, nurses, technicians, parents and babies at seven hospitals in Vietnam were key to designing the final product which is currently in-use in seven countries.

Left: A nurse uses our alpha prototype to show how she would drape Firefly to keep the light from bothering bystanders, and to keep the baby warmer. Right: The resulting top light is made of thick metal to ensure heat can escape even when draped.

At many hospitals we visited, nurses indicated that they would want to drape a sheet over Firefly's top light to minimize air flow over the baby and keep the baby warmer. Other doctors and nurses we met commonly draped overhead phototherapy devices to keep the light from bothering bystanders' eyes. What they didn't know is that draping any of these devices impairs the device's ability to cool the electronics. This can lead to a variety of ill effects including reducing light bulb life, dim ineffective phototherapy, overheating the baby, or even fire in very extreme cases.

Result: We designed the top light out of thick aluminum and mounted the electronics and lights directly onto it, drawing the heat from the electronics up and away and keeping it cool even when covered by a sheet or blanket.

We were lucky to meet a tall mom and her above average baby early in the process so we could discover that our bassinet was too small.

We asked healthcare providers whether they thought the bassinet would be cozy for a small newborn, but still comfortably fit a large newborn. Luckily, one of the tallest women in Vietnam was at one of the hospitals the day we visited. She consented to put her big, healthy baby briefly into the bassinet. Sure enough, it was a very tight fit. Other healthcare providers commented that the walls seemed to be too low for comfort and too steep to easily access the baby for procedures like a blood draw.

Result:We went back to the drawing board, gathering statistics on typical newborn sizes, and resizing the bassinet and the entire device to fit a 90th percentile baby.

Left: A mother bumps the baby doll's head while lifting it out of the alpha prototype. Right: A mother safely and comfortably lifts her baby in and out of the final Firefly device with raised top light.

We asked doctors, nurses, and parents to try taking a doll in and out of the Firefly alpha prototype to see how they would do it. Even though the bassinet was removable, most preferred to take the baby directly in and out of the device while keeping the bassinet in place. They explained there isn't a lot of space in a Neonatal Intensive Care Unit, especially not tabletop space where they could put the bassinet. However, the top light was so low that our baby doll was getting a lot of bumps and bruises along the way.

Result: We used a tape measure to simulate different light heights and had a variety of healthcare providers put the baby in and out until we had consensus on the right height. We adjusted the height of the top light higher in the final design.

4. Many settings, or No Settings?

We asked healthcare providers at each hospital to consider a variety of different lighting control options. The main question: did most healthcare providers want multiple levels of brightness, and separate control of the top and bottom lights, or just one button that could turn both lights on and off with a single brightness? The various buttons and icons led to a discussion about the settings they used on their current overhead phototherapy devices. Most existing devices offered either two or three different brightness levels. Through these interviews, we discovered even staff at the same hospital had different approaches to which brightness setting they would choose. Some would always leave the phototherapy on low because they wanted the bulbs to last longer; others would occasionally put it on high for patients with severe jaundice; and still others had never realized there were multiple settings to choose from. In multiple hospitals, we noticed newborns laying under white lights and looked closer to find the device included an option for a white observation light. At one hospital, I asked the nearest nurse if she knew the child was not receiving treatment. She explained to me that this was a white light phototherapy unit. Unfortunately, the overwhelmed staff had never discovered that they were not providing any phototherapy because the device had always been in patient observation mode.

Result: Given that there is no known way to overdose on phototherapy, we wanted to give every baby the best chance at a successful treatment. We decided to provide one button and one power setting with both lights providing intensive phototherapy. We also excluded the white patient observation light.

Left: Nurses in Vietnam discover the Firefly alpha prototype is too long after attempting to put it on their typical infant cot. Right: The final Firefly design fits neatly within the typical-sized cot in Vietnam.

Neonatal Intensive Care Units (NICU) in low resource hospitals are busy places. At National OBGYN Hospital in Hanoi, where the first baby was treated with Firefly, there were 9 rooms and 150 newborns. At all the hospitals we visited across many countries, one of the scarcest resources was counter space. When we asked nurses to show us where they would keep Firefly in the NICU, she picked it up and tried placing it in one of the standard infant cots. Unfortunately, the device was just a couple inches too long to fit inside the rails! The experience repeated itself at hospital after hospital. There was a standard-sized infant cot, so the team took measurements before we left.

Result: We ensured the final design would not be so long, and that it would leave extra room to hold onto the device while lifting it in and out of a typical infant cot.

Left: A mother provides positive feedback while lying next to the Firefly alpha prototype in bed with the light turned on. Right: In the Philippines, the first mother and baby benefit from treatment in mom's room.

One of our hopes was for the new design to be used in the room with mom, bringing mom and baby together for breastfeeding, bonding, and to better watch over the baby. Luckily an intrepid mom was willing to give it a try. We placed the device next to her on the bed and she lay next to it with the lights on. She reported that she could lie comfortably next to it and it wasn't too bright for her eyes. She also indicated that she loved the idea of having her baby close during treatment.

Result: We maintained a similar device configuration to enable it to fit on mom's bed.

After experiencing the process side by side with Design that Matters, our Firefly manufacturing partner, MTTS, is now using rapid prototyping to design a radically new version of their Continuous Positive Airway Pressure (CPAP) machine to help newborns with respiratory distress.

MTTS is using user interface rapid prototypes during interviews with doctors and other stakeholders to design the new machine. MTTS used rapid prototyping materials to make a variety of different form factors for feedback around aesthetics and ergonomics. Paper printouts stand in for displays and controls.

To gather stakeholder feedback from experts across the world, MTTS developed a survey highlighting various options for displays and controls. Domain experts including East Meets West partner doctors responded to the questionnaire, the results are being used to inform the design.

The contrasts between the original CPAP and the new design concepts are striking! The redesign is made possible by newly-developed internal resources and capacity at MTTS, built with help from Design that Matters during the Firefly project. The result is an organization that now approaches each new device through a human-centered design lens, and is better-positioned to create world class designs that will save many newborns across the globe.