Are.na is a collaborative research website that allows designers and artists alike to connect dots and dig into creative interests. This article was originally published on Are.na's blog.

In January, around the time of the Women's March on Washington, my pilates studio wrote an Audre Lorde quote on the chalkboard near the door: "Caring for myself is not self-indulgence, it is self-preservation, and that is an act of political warfare." At first it made me feel a kinship with the studio, because I like the quote and I admire Audre Lorde. But throughout the class my eyes kept wandering over to it as I tried to parse what was making me feel uneasy. I decided the quote was a ploy, a convenient way for the studio to justify a $35 exercise class. Don't get me wrong—I believe in self care, but luxury fitness is not a radical act.

More and more, companies are capitalizing on post-election liberal guilt—using the current political climate as a means to increase monetary gains. With advertisements or socially-minded products, these companies address complex social issues in a superficial way. But more than being tone-deaf, this strategy is potentially harmful: Instead of encouraging genuine civic engagement, it promises to 'raise awareness' through monetary transactions. The narrative shifts from the importance of the cause to how great the company is for being socially conscious (woke). Ultimately, this strategy is damaging because it focuses on the feelings of the individual consumer rather than the collective whole.

Last year, a friend purchased a retro feminist T-shirt from a retailer that promised to donate a portion of the profits to Planned Parenthood. When she got the shirt, she realized it was made in Bangladesh. She began an email exchange with the shop owner about how feminist products made in sweatshops is a lazy form of activism. Namely, it fails to recognize the intersectionality of feminism—that it is more than just supporting Planned Parenthood, an organization that primarily focuses on the reproductive health of women in the U.S. If we care about women's rights in America, my friend argued, then we should also care about the women and children who work abroad in sweatshops. We should make structural connections to understand parallel issues. In Freedom Is A Constant Struggle, Angela Davis writes, "Whenever you conceptualize social justice struggles, you will always defeat your own purposes if you cannot imagine the people around whom you are struggling as equal partners." It's possible that the women who made this T-shirt have read Angela Davis, but perhaps it didn't occur to them to apply it to commerce.

A similar argument can be made about the rise of feminist clothing companies like Nasty Gal or Thinx. These companies built their brand on the platform of empowering women, yet they do not foster a work environment—with fair parental leave, for example, or equitable pay—that reflects these values. As consumers, we have agency in how we spend our money and who we choose to support. But capitalism is a beast, and relationships complicated by capitalism are exacerbated by globalization. Take Starbucks, for example: the company announced at the beginning of the year that it was committed to hiring 10,000 refugees over the next five years. That's awesome, except that most of Starbucks' coffee is not fair trade—meaning their coffee pickers are not being paid minimum wage or overtime. While supporting refugees might be more topical at the moment, Starbucks ultimately has more control over their own labor practices. To symbolize solidarity with one marginalized, vulnerable group while failing to support another—one directly under its charge—suggests that Starbucks' refugee pledge is little more than a strategic piece of marketing.

On January 28, the New York Taxi Workers Alliance staged an impromptu strike to protest against President Trump's executive order on immigration. During the strike, Uber tweeted that they were removing surge pricing for rides from JFK. Customers interpreted this move as Uber trying to profit off of the strike, and then the hastag #deleteuber began trending. Not letting an opportunity for publicity pass, Lyft publicly donated $1 million to the ACLU. In retaliation, Uber pledged to provide legal support for threatened drivers and established a $3 million legal defense fund. Within the span of two days, Uber and Lyft had entered into an arms race to publicly "out-good" each other.

There is a long history of companies giving back to society—it can be a symbiotic relationship that raises awareness to both brand and cause. Microsoft, Bank of America, and General Electric all have philanthropic arms that work in community development. There is even a new wave of social entrepreneurism that uses the "buy one, donate one" model as part of their core values—for example, Toms Shoes donates a pair of shoes to a person in need with every purchase. Warby Parker does the same with its eyeglasses.

However since the most recent presidential election, companies have moved away from non-partisan issues, fully embracing divisive politics. They use political outrage to increase profits, exemplifying basic principles of neoliberalism. By commercializing the resistance movement, brands draw attention away from the original cause, thus weakening the message and presenting activism as something that can be purchased. 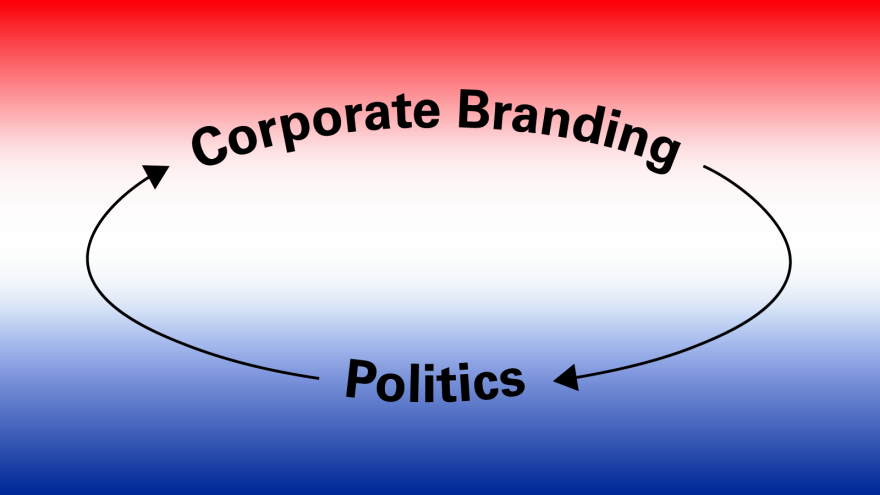 It is no coincidence that the 2008 Obama campaign was the first to feature graphic design so prominently in its campaign strategy, effectively introducing branding to politics. ? The challenge of Obama's campaign was to make him more presidential; up until that point, he had limited political exposure to the American public. Obama's campaign co-opted corporate branding strategy by prominently featuring a slick logo, as well as consistent typography and brand language. The aesthetic was fresh, favoring a friendly, geometric sans serif font (Gotham) rather than the typical serif font that had been popular in political campaigns since the 1980s. This approach appealed to millennials, and prompted grassroot efforts like the Shepard Fairey "Hope" poster.

With the brand strategy, Obama was able to reach millennials and compel them to vote. Ultimately, those millennials were a deciding demographic of the 2008 campaign. Because of this, Obama became the 'cool' president, the candidate that knew how to reach the youth. 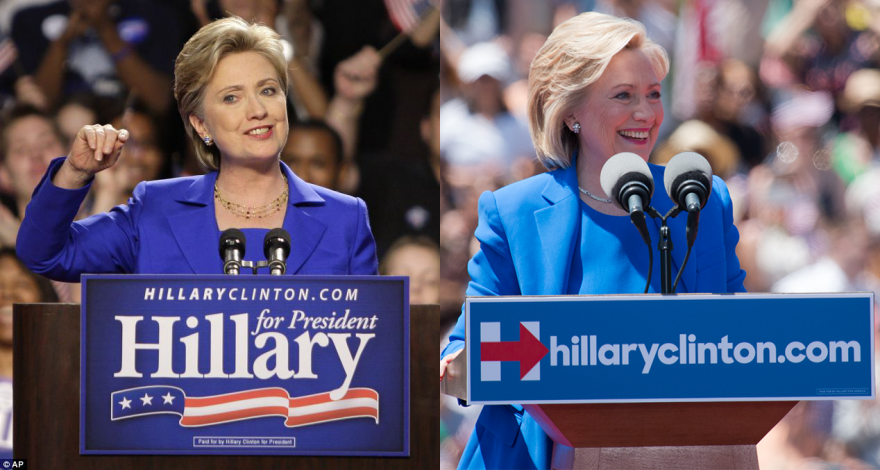 Using Obama as a model of success, Hillary Clinton's 2016 campaign took a similar aesthetic approach in developing a logo and custom sans serif font. What the campaign failed to realize was that the same graphic strategy that reached millennials in 2008 would not necessarily be as effective in 2016. In the eight years since the election, the aesthetic of the Obama campaign (the friendly sans serif font, the stylized logo) had been absorbed back into the corporate branding world. If you want to sell stuff to young people, design things that look like the graphics of the Obama campaign (minus the red, white and blue).

Since the 2008 election, numerous brands have been designed or redesigned with logos that build upon the Obama campaign's typography: Bud Light, Facebook, Glossier, Google, Grubhub, Mastercard, Mcdonald's, Spotify, Zocdoc, and lastly, Hillary for America. Hillary's 2016 graphic design reflected the candidate's values through its meticulous attention to detail. However, what this approach failed to recognize was that using corporate branding in her political campaign only intensified her association with the corporate–incidentally her most consistent critique throughout the election cycle (aside from the emails). What was once fresh and new, is now a brand strategy re-co-opted by the corporate world—the same world that was its genesis. The Obama campaign not only changed the visual approach to politics, it also changed how corporations use and value the millennial aesthetic. Obama borrowed a systematic approach to branding from the corporate world and in turn the corporate world borrowed the friendly, youthful-cool of his campaign from him. By the time Hillary's second presidential campaign came around, it was played out. Millennials, the progenitors of 'personal branding,' were already wise to the scheme.

Hillary's loss to Trump, and the subsequent absurdity of Trump's term, has sent parts of the U.S. into a tailspin that brands have been all too eager to capitalize on. During the 2017 Super Bowl, Airbnb ran a 30 second commercial that featured a geometric sans serif font, on top of the faces of people from different minorities. The message was an implied critique of Trump's travel ban, stating: "We believe no matter who you are, where you're from, who you love or who you worship, we all belong."

A year prior, the creative agency HUMAN produced the video "Together" in support of the Bernie Sanders campaign. The visual approach of Airbnb's Super Bowl video is remarkably similar to the Bernie campaign video—in both, different combinations of people's faces made a diverse whole. Bernie called his campaign a political revolution, creating an urgency and an authenticity that could not be captured in a single logo. What a shame that the momentum of this revolution has now been flattened into a piece of marketing, paid for by a company valued at $30 billion. Is this the new radical?

Allyn Hughes is a graphic designer based in New York. In 2016, she was a member of the design team on Hillary Clinton's presidential campaign.