We like Christopher Alexander's Notes on the Synthesis of Form for the way he takes a sledgehammer to the fetish over aesthetics and artistic pretension in design. We're often mystified by the design community's enthusiasm for uncomfortable chairs and weird-ass light fixtures. If the goal is to apply design principles to achieve social outcomes, aesthetics are only useful in that they help us achieve our purpose.

We love Notes on the Synthesis of Form for Alexander's rational and systematic approach to identifying the appropriate design opportunities, managing the real world's bewildering complexity and delivering meaningful results for real people. Published in 1964, the book has plenty of sections that are dry as toast, but the good stuff is so good it's worth persevering.

What follows is a quick summary of my favorite ideas. Fantastic book, check it out! And if you buy the book through the links in this email, Amazon will send part of the proceeds to DtM! [Notes on the Synthesis of Form]

Alexander describes the fundamental elements of design in terms of form and context. "The form is the solution to the problem; the context defines the problem." In other words, Form is the design objective—the thing we're going to change. Context is the ensemble of environmental constraints that will remain the fixed, that we will not change.

Each insight derived from the user and the environment can be thought to exert a kind of pressure on the product form. Alexander gives the example of designing a teapot to demonstrate the importance of choosing the appropriate context. Ordinarily, the teapot is the given form, and everything else around it (counter, stove, faucet) is the context. It is possible, though, to choose a context that leads to very different results. For example, what if the form is "easy-access hot water"? Given that we're no longer restricted to a container we need to heat on the stovetop, we might abandon the tea kettle in favor of an electric hot water dispenser that sits on the counter, or something exotic like a high-pressure nozzle attachment for the sink.

The key point is that in choosing your context, you can "marry in haste and repent at your leisure." Alexander argues that we should carefully consider the limitations we're choosing to "marry", and whether they're based on careful deliberation or mere tradition. On the other hand, we need to resist the temptation to "boil the ocean." Alexander writes about the "impractical imperialism of designers who want to redesign whole cities and whole processes of manufacture when they are asked to design simple objects.

A context-aware architectural design that uses passive heating, cooling and lighting. Compare to the standard McMansion that assumes residents will manage heating and cooling with energy-sucking HVAC systems, and illumination with electric lamps.

Alexander is critical of designers who put the burden of adaptation on users, giving an example from architecture:

Since everything in the human environment can nowadays be modified by suitable purchases at the five and ten, very little actually has to be taken care of in the house's basic organization. Instead of orienting the house carefully for the sun and wind, the builder conceives its organization without concern for orientation, and light, heat and ventilation are taken care of by fans, lamps and other kinds of peripheral devices. (p.29)

American architects of McMansions from Hell can assume that future residents have access to IKEA. When designing for social impact, we have to consider very carefully the total cost of outcome. A rural hospital in sub-Saharan Africa can't exactly run out to the hardware store to buy a missing surge protector, or send their staff off to language training because the designer assumed everyone understood technical English. Once you release your product, what else has to be true about the world in order for it to work?

Alexander explains that there exists an opportunity to divide forces into subsystems containing relatively independent groups of strongly-related constraints. Within each group you indicate the relationship between requirements--for example, in a "House of Quality"-style a matrix where a plus-sign indicates a complementary relationship, where a minus-sign demonstrates mutual exclusivity. The key is that by thoughtfully separating the product elements, you are free to modify each subgroup almost independently. For example, in Firefly we were able to treat the top light, the bottom light and the bassinet as three nearly separate and independent design elements.

Alexander noticed that some patterns of constraints, or forces, occurred again and again. For example, every house has to provide the inhabitants with a place to sleep and eat. Alexander labeled these commonly-occurring groups of forces as "patterns." DtM has already developed a few "patterns" related to medical device design for low-resource countries. For example, many existing medical technologies fail in low resource settings because of five typical misfits: 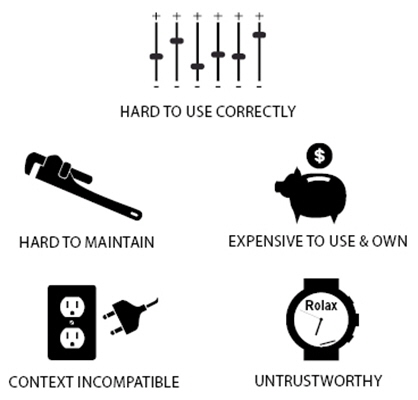 Alexander in fact wrote an entire book on hundreds of common patterns in urban planning and architecture around the world. A Pattern Language is another DtM favorite!

THE MAP IS NOT THE TERRITORY

Alexander warns about the hazards of "self-consciousness" when considering the key factors influencing a design.

When a number of issues are being taken into account in a design decision, inevitably the ones which can be most clearly expressed carry the greatest weight, and are best reflected in the form. Other factors, important too but less well expressed, are not so well reflected. (p.69)

Defining "purchase price" for a medical device is easy, defining "usability" is hard. In "Black Swan Farming", Paul Graham explains the hazards for venture capitalists who focus exclusively on metrics like early-stage fundraising success that have no correlation with a company's long-term prospects.

Alexander makes a key point that explains our experience with Firefly:

A well-designed house not only fits its context well but also illuminates the problem of just what the context is, and thereby clarifies the life which it accommodates. (p.91)

In other words, a great design illuminates the context and can generate a deeper understanding of the problem. A well-designed product's most important features or greatest value may only become apparent after the fact.

The airfoil wing section which allows airplanes to fly was invented at a time when it had just been "proved" that no machine heavier than air could fly. Its aerodynamic properties were not understood until some time after it had been in use. Indeed the invention and use of the airfoil made substantial contributions to the development of aerodynamic theory, rather than vice versa. (p.91)

The invention is based on a hunch which actually makes it easier to understand the problem. Like such a hunch, a [product point of view] will often precede the precise knowledge which could prescribe its shape on rational grounds. (p.91)

Alexander says that design can be a process for testing and formalizing a designer's instincts. He writes about the "recent tendency among designers to think about their designs as hypotheses," tentative assumptions about the nature of the context.

We expected Firefly to be "hard to use wrong," and included features that would reduce the harm from users putting blankets over the baby, putting too many patients in one bed and positioning the overhead light incorrectly. It was only after we started testing that we discovered the Firefly outcomes of reducing overall newborn treatment times, reducing the incidence of newborn cross-infection and averting risky and expensive exchange blood transfusions.

In his 2010 talk "Designing with Forces," Ryan Singer from 37 Signals does a fantastic job interpreting Christopher Alexander's Notes on the Synthesis of Form from a UI/UX perspective [Vimeo].