What Can We Do to Prevent Events Like the Las Vegas Mass Shooting?

There are things that we design to keep us safe from those who would do us harm: Pylons and cordons, bulletproof vests, security checkpoints, facial recognition software, personal firearms, criminal databases. But the tactics used by last night's mass killer in Las Vegas defied all of them.

At 10:08pm last night, well-armed 64-year-old Stephen Paddock opened fire on the attendees of the Route 91 Harvest country music festival. Here is the precise moment the shooting began, captured by a festivalgoer:

It brought to mind last year's deadly Pulse nightclub shooting in Florida, where a 29-year-old slaughtered 49 people and wounded 58 others, barricading himself inside and taking hostages before being killed by police. Some survived that incident by hiding in locations that the gunman couldn't get to.

Paddock's attack was tactically very different. He was across the street from the open-air venue—and firing from the 32nd floor of a room at the Mandalay Bay hotel, hundreds of feet above street level, with a commanding view over a crowd of thousands. There was no place to hide and no way to tell where the gunfire was coming from. After the first round of gunfire, this is what the scene looked like on the ground:

After the second round of gunfire, panic reportedly broke out. People ran, and some were trampled in the ensuing stampede.

Consider the situation: Even if you yourself were armed to the teeth, there would be virtually no way to pinpoint where the fire was coming from and accurately return fire from that distance. There were off-duty police in attendance at the concert and they were unable to return fire. Even if the range of your weapon matched Paddock's, absent sniper training and a spotter you'd be peppering the side of a hotel filled with innocents above, below and to either side of the shooter. Paddock, with no such concerns, could simply continue to reload and spray. 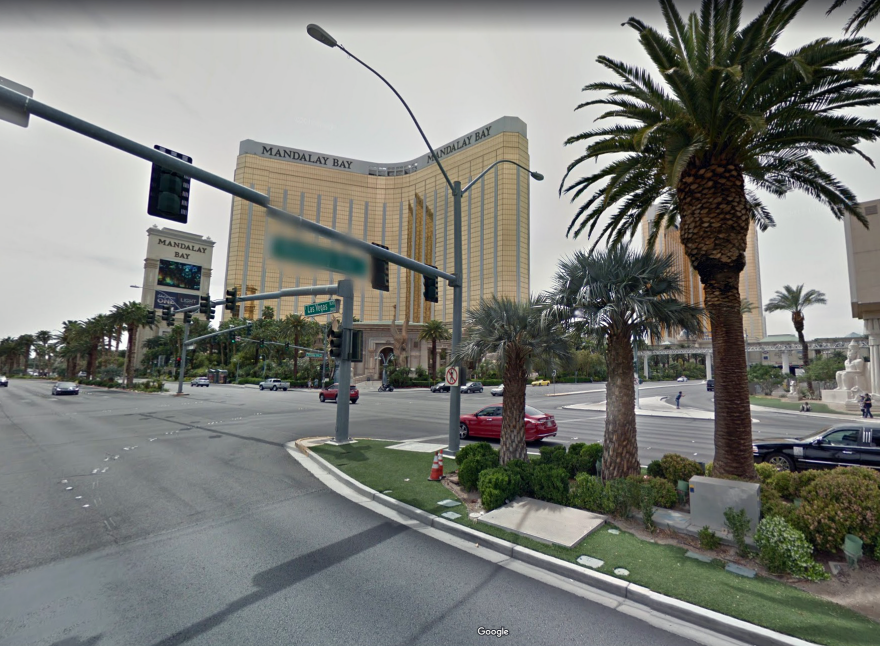 This is approximately two-thirds of the distance that the gunman was firing from. The festival grounds are behind the camera.

By all accounts local police arrived on the scene swiftly, armed with handguns, shotguns and even assault rifles, but there was no way to take Paddock out from the ground. It's also not clear if he was even still firing when police arrived. Paddock reportedly fired for several minutes on the crowd of 22,000, then took his own life. Police say they found some ten rifles in his hotel room.

The numbers may change, but at press time the casualties were estimated at 50 dead and over 400 wounded. As grim as this sounds, given the circumstances that seems miraculously low.

Perhaps what's most terrifying about this particular mass shooting is that none of the commonly-suggested solutions could have prevented this. For example:

Number one that's simply never going to happen in this country, where the rhetoric around gun control has become too polarized for any kind of meaningful debate to take place. Number two, even if you somehow convinced all law-abiding citizens that all guns should be illegal, criminals will still find a way to get them. Guns are illegal in New York City, yet we had nearly a thousand shootings here last year.

Go the other way and arm all citizens.

As mentioned above, there's no way people on the ground would have been able to accurately return fire. And even if you were in a room on the same floor as the shooter, armed, and a crack shot at the gun range, are you trained to breach a room and take out a hostile?

Paddock, 64, lived nearby in an upscale retirement community with its own golf course. At press time there was no indication that he had links to any terrorist groups.

Paddock reportedly had previous run-ins with the police and was already "in the system," but there was no indication that an event like this was in the cards.

This is, of course, impossible to do comprehensively. All cities offer large gatherings of people and a plethora of high vantage points.

So what's to be done?

The absolute root of the problem is that our society contains individuals who, out of ideology or mental illness, want to harm scores of others at once. In America it's with guns, in China it's with knives, in Europe it's with vehicles, in Israel it's with explosives. It seems to me impossible to design and build enough physical impediments to safeguard against those weapons.

These kinds of mass crimes against humanity originate within the minds of their perpetrators. And while we have thousands or millions of medical professionals worldwide dedicated to keeping the human body healthy, it seems to me that the brain—and what's going on inside of it—is perhaps the least-well-understood organ of all.

What Can We Do to Prevent Events Like the Las Vegas Mass Shooting?