Over two years ago, Google's Advanced Technology And Projects group began developing Project Jacquard, an effort to transmit the idea of futuristic wearables from tech to the textile world. Head of the Jacquard project Ivan Poupyrev (who spoke at our 2015 Designing Here Now conference about it) along with his team sought out to create conductive yarn that they would then embed into manufacturing chains within the fashion industry to create interactive, touch-activated clothing. After a long stretch of development, their first collaboration with denim giant Levi's is now available for sale—behold, the Levi's Commuter Trucker Jacket with Jacquard, the first jean jacket with invisible embedded technology.

Here's a breakdown of the jacket architecture: all of the technology is installed in the left cuff of the jacket, which consists of a removable, rechargeable energy drive and the raised conductive yarn embedded into the denim. 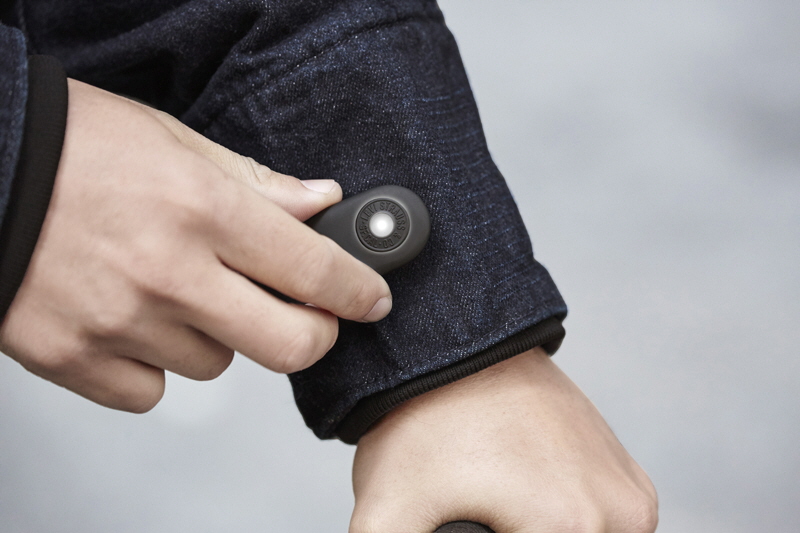 How Jacquard connects to your phone is clever in that it lets you customize the interaction to your liking: using three primary commands (brush in, double tap, and brush out), you can tell Jacquard to either turn your music on and off, give you directions or your current ETA, it can even read off text messages and answer your phone calls. Overall, the number of tasks Jacquard is able to juggle are low, but it is certainly the beginning of an interesting new look at wearables.

So now that the jacket is finally on the market, the real question is whether it's worth the wait, and I think this question rests primarily in your day to day. As advertised, this jacket is ideal for commuters, especially those who ride bikes to work and would rather keep their eyes on the road than their phone.

For Google, it was obvious what the benefit was of working with a large and fashion-informed company like Levi's instead of designing the jacket themselves. For one, the jacket is inherently stylish and affiliated with the most classic of denim brands, and two, Levi's is taking into account the comfort, material, and tailoring needs of the commuter while Google can focus on the ideal UX.

For those who have tested it out, the two main issues with the jacket seem to be finicky rather than deal breakers. One highlighted issue has been the cuff. Even in the videos, it's easy to see that the hardware within is a bit stiff, although subtle enough that it doesn't significantly distract from the overall style. The other hot issue at hand is the fact that the jacket can purportedly only be washed 10 times before the conductive technology fuzzes out (and note that the removable charging button on the side cuff should never be washed). Several publications have written about this, but as fashion experts weigh in, they emphasize the fact that many people who work with denim don't recommend ever washing your denim items.

Final verdict? The Levi's x Jacquard jacket carries a considerable price at $350, but if you're a bike commuter who is looking for safer options to stay connected while cycling, this could end up being a pretty good outerwear option.