What a Bump Stock Does, and Why People Want Them

Humans will always invent mechanical contrivances that help them solve particular problems. By shaping materials and assembling parts in novel ways, these contrivances increased efficiency, whether they're eggbeaters, deli slicers or something more nefarious. Here we're going to look at the bump stock, which Stephen Paddock used to murder 58 people and wound over 500 in Las Vegas, and why people desire them.

The Difference Between Fully Automatic and Semi-Automatic

With a bolt-action rifle, the operator pulls the trigger, firing a single bullet. The operator must then pull the bolt handle back to eject the shell casing, then move the handle forward to load the next round.

With a semi-automatic rifle, the operator pulls the trigger, firing a single bullet. The recoil of the rifle then automatically ejects the casing and loads the next round. This is obviously far faster as the operator is not required to work a bolt handle.

With a fully automatic rifle, the operator holds the trigger down and bullets are automatically fed into the barrel, firing for as long as the trigger is held down. This is a magnitude of order faster than semi-automatic operation.

What a Bump Stock Does

A bump stock replaces the standard stock on a semi-automatic rifle, and allows that rifle to slide backwards within the stock after each shot. Coupled with a forward handle grasped by the operator's non-trigger hand, what then essentially happens is that the recoil of the rifle sends it backwards into the stock after a shot, and it then bounces back forwards, bumping the trigger into the operator's stationary trigger finger.

In other words, it renders the weapon automatic, firing bullets at a far faster rate than one could possibly pull the trigger. (By some estimates, between six and 12 shots per second.)

From a mechanical perspective, it is fiendishly ingenious. And incredibly deadly.

How Do People Get Them?

While fully automatic machine guns are largely illegal, bump stocks are perfectly legal and can be ordered online for as little as $100.

That bump stocks are legal does not appear to make sense, but the Firearms Technology Branch of the Bureau of Alcohol, Tobacco, Firearms and Explosives has deemed them okay for technical reasons you can read in this letter posted by a bump stock retailer.

Why do People Want Them?

Automatic weapons are a boon to soldiers in combat. Where do they fit within the context of civilian life?

No. Even the most artless hunter would agree that fully automatic fire has no utility when one is killing an animal for food; venison isn't much good when it's riddled with 5.56mm rounds.

For some people, firing a fully automatic weapon presumably confers a thrill. This is why businesses like Machine Guns Vegas, a gun range that allows patrons to fire fully automatic weapons in a controlled environment, exist. "Machine Guns Vegas is the only Vegas-lounge experience that lets you fire the kind of kick-ass artillery you've seen in the hands of the highly-skilled SEAL and Delta Force teams," the company writes. 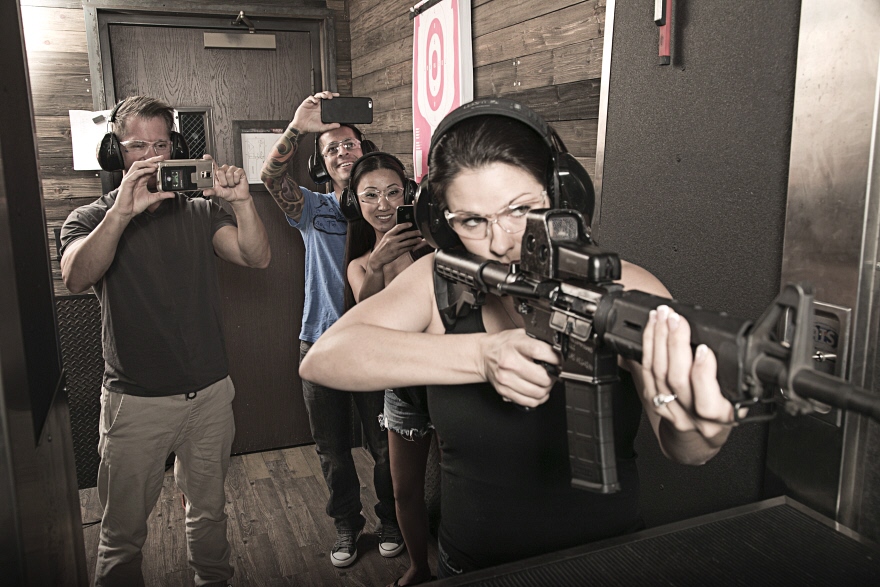 From modern machine guns to historical handguns, you'll get the real feel of what it's like to clear a room with just a pull of the trigger. This isn't a walk-in gun store or dimly-lit shooting gallery. Machine Guns Vegas is a sensory experience that will rock your thrill index with every shot you take.

Following Paddock's killing spree, even the co-owner of Machine Guns Vegas, Genghis Cohen, called for stricter gun laws. "One guy sat in a hotel room with 23 guns and managed to kill or injure 600 people," Cohen told The Guardian. "They say he was using 60 to 100 round magazines. Why does a 64-year-old man, who is not in the military or in the police department…need a gun that can basically fire fully automatically?"

Cohen, who briefly closed the business after the shooting, was met with this: "The company has been targeted with 'fuck you' hate mail from seething gun enthusiasts who do not believe he should have closed for two days."

It is important to note that there are otherwise law-abiding citizens in this country who actually believe that one day the government is going to attack them to take their weapons away by force. They believe this and will tell you so. Others cite the need to defend their homes and families, linking to YouTube videos of security footage capturing horrifically violent home invasions. Well-equipped weapons, they feel, will keep them safe.

To understand the mindset of someone who wants to purchase bump stocks, let's look at how Slide Fire, a bump stock manufacturer, markets them to its target audience. Listen carefully to the language:

What is your reaction to that video?

In my own limited experience, the people I have met that I could classify as hardcore gun enthusiasts, and their fervently anti-gun opponents, have little concept of the others' beliefs. Without a grasp of these beliefs, however outlandishly one side views the other, I suspect that little can be accomplished within the sphere of reasoned debate or legislative adjustments.

We will leave the topic of legislation to more politically-oriented websites. Here we looked at a technical solution to the "problem" of not being able to fire bullets fast enough. In the next entry, we'll look at technical suggestions, supplied by design-minded readers, on how an attack like Paddock's might be stopped in future.

What a Bump Stock Does, and Why People Want Them