Green houses that stand up to 'quakes 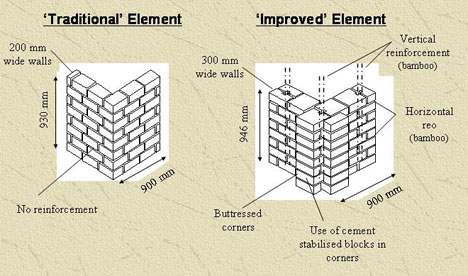 When being electrocuted, they say it's not the volts that get you, but the amps; and in an earthquake, it's not the actual quake that kills you, it's your house coming down on top of you.

Environmental engineer Dominic Dowling has solved this problem in an innovative, unabashedly green and extremely low-cost way--by building houses out of mud, and buttressing them with bamboo. One of his mud constructions will be displayed next week at Australia's Sydney Design Week '07.

The benefits of mud construction aren't just confined to the Third World, he says. "Look at the massive amount of energy required to build modern houses using steel and concrete. There's the energy required to make those materials, and transport those materials. "If you can make something from the earth, it can be sourced very close to the location. And, at the end of the day, it can all just be returned to the earth. It's got to be the way of the future.

"[Mud homes] aren't just something poor people in developing countries live in. It's a wonderfully appropriate construction material for Australia because of its environmental advantages, its thermal advantages, its aesthetics and its liveability. Internally, earth construction controls the climate so wonderfully you don't have to rely so much on energy consumption for heating and cooling."

Dowling's anti-quake house kit is constructed of similarly humble materials: bamboo, string and wire netting. "We reinforced an existing house in less than two weeks for $50," he explains. Read all about it here.

Green houses that stand up to 'quakes