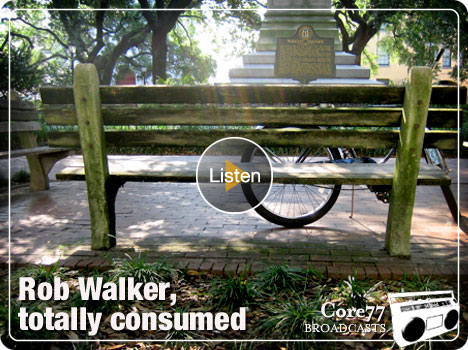 Rob Walker pens the weekly "Consumed" column for the New York Times Magazine, where he wonders out loud about branding and marketing issues facing consumers. While his columns can encompass everything from the current Crocs phenomenon to the counterculture Brand Underground movement to the concept of unconsumption, Walker cautions that he's not a design critic per se, but rather surveys products and packaging from a consumer, and often quite neutral, perspective. These issues are further explored on Walker's popular blog murketing, a term coined after writing about the innovative yet undefinable marketing practices of Red Bull. Walker also finds himself engaged in a series of side projects including International Review of Wine Packaging Aesthetics and the Martin Luther King Blvd. Flickr set and is the author of the book Letters from New Orleans. On the shady, Spanish moss-strewn Wright Square in Savannah, Georgia (see image above), Alissa Walker (no relation) caught up with Walker to ask him about design and branding, his new book on consumer culture, and, seriously, what is up with those Crocs?