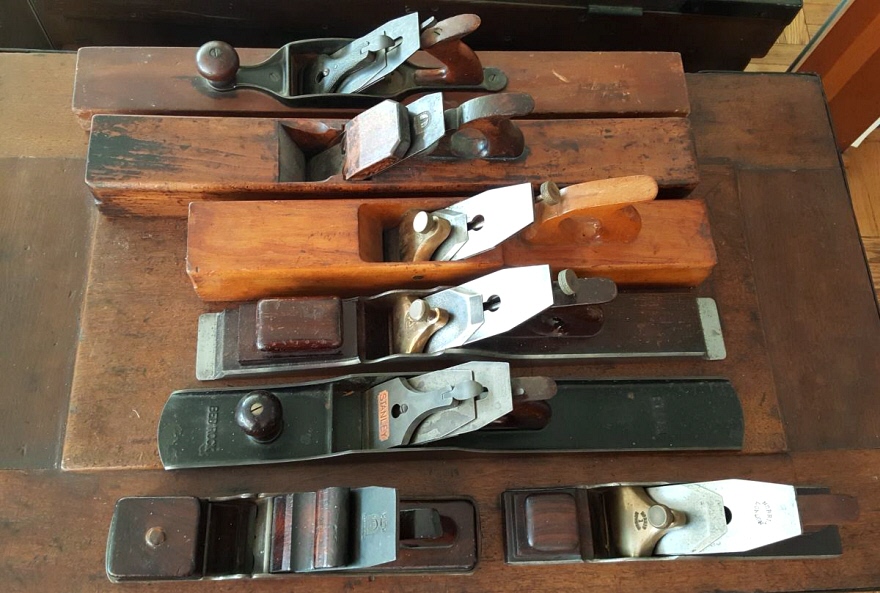 Long planes, "Jointer Planes" as they are called exist for two reasons:
The first reason is for accurately milling wood. The second reason is for making the soles of other shorter planes accurate.

The first reason is the usual reason we are all taught that when milling wood by hand (which I do) the longer the plane you use the more accurate the final result will be. The standard way of planing anything flat is to first intentionally plane it hollow and then with the longest plane you own go from end to end until the high ends disappear into one long continuous shaving. If you use a short plane the concavity under a shorter plane will be less and therefore you will get that continuous shaving over a shorter distance than a longer plane and it is less accurate. It's beyond the scope of this blog entry to go into all the geometry but that's why in the days when people did all their milling by hand a long plane was pretty useful. This is especially true because in the 18th century, when wood was sawn by hand it was sawn pretty accurately and to final thickness and by the time it got to the joiner ideally only a few passes with a jointer plane were needed to finish the job. Smooth planes were used to take care of low spots the jointer missed.

The second reason comes from shops that used wooden planes regularly. The beech soles of hard used wooden planes wore and the occasional pass over by a long accurate jointer plane easily got their soles back to flat. Shops would keep a long plane especially for this purpose and use shorter planes for most things. Milling wood was done with long but not your longest plane - so that the longest plane would stay flat and could be used to fix all the other planes in the shop.

The long wooden plane 26" (second from the back) is a late 18th century jointer plane by Gabriel. It's in very poor condition, but the main reason it probably survived was because unlike short, more useful planes this plane was initially used as a reference and was taken very good care of for at least the first part of it's working life. Long wooden planes are the lightest of the genre and with their high sides by far the easiest to hold square. I learned this from Larry Williams many years ago and put it into practice. When you hold a plane with a high center of gravity vertically, it feels square, much like holding a glass of water and walking across a room. You get this effect with all planes but with woodies the effect is most pronounced. It because far easier to joint something free hand because once you get used to the sensation you can feel when you are out of square.

The long Stanley 28" transitional plane (no. 33) at the back is a rarity, Mimicking the long wooden planes that were readily available Stanley, offered transitional planes with a wooden sole and a metal mechanism in lengths up to 30". By the time this plane was available however almost every cabinet shop in the US of any size would have used powered machinery to do basic jointing and planing, and there wasn't really much of a call for long planes. In use compared to a regular iron Stanley they are at best mediocre.

Thomas Norris & Son - the great ((mostly) 20th century) infill plane maker listed jointers from 13 1/2" to 28 1/2" long in their catalogs and longer one on special order. I included three (that I don't use) here. The 22 1/2" A1 (the "A" is for adjuster) Norris jointer in the picture (middle) is on the rare side, but once you try using it for any length of time you understand why. It's just too heavy for regular use. The 17 1/2" plane plane I have in the shop (not in the picture) is far, far more common because it was far more useful. Of course by the 1930's there was less and less call for long planes and production was never very high.
Behind the Norris jointer is a 1930's Norris A72 22" wooden jointer plane. This is a collectible rather than a working plane. They suck. Norris in a depression era bid to lower the cost of their tools grafted the Norris mechanism onto a fairly random Beech body. The mouths are wide and it's not uncommon for the cheeks to be cracked. You find them in good cosmetic condition because they weren't used much. 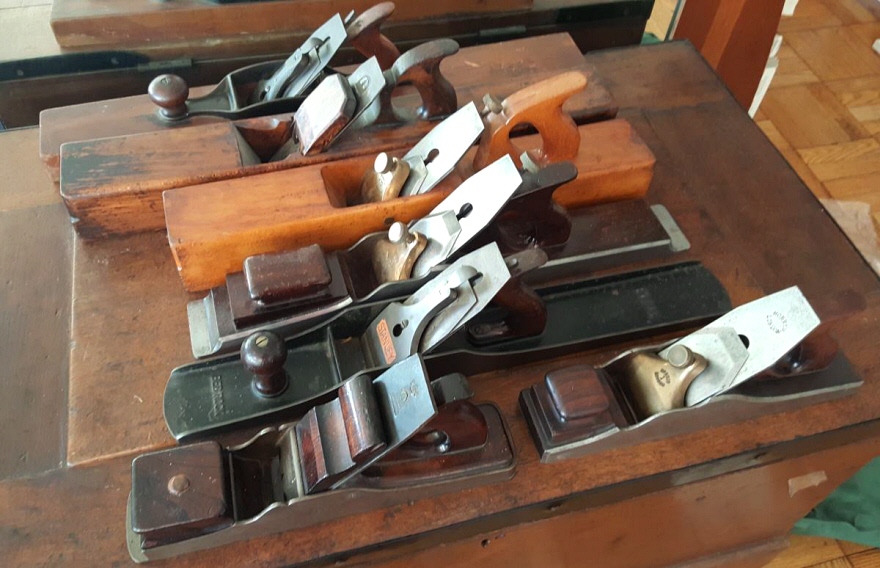 The long plane in front of the Norris jointer is a C. 1920's Stanley Bedrock 608. The 608 being the premium line of Stanley No. 8's. The Number 8 and 608 were the longest iron planes Stanley made and is 24" long with a 2 5/8" wide iron. I find the tool way to heavy for regular use. In my toolbox I have a Bedrock 607 ( 22" long - the same length as a regular No 7) which I like a lot, use, and is long but a lot lighter than the #8. Lie-Nielsen and Clifton make long planes, we have a Clifton no.7 in our showroom and it's a wonderful plane, better in many respects than my 607, but both Clifton and Lie-Nielsen use far heavier castings than the original Stanleys. I find the modern 8's and 7's planes unwieldy for a long sessions of planing.

The English use the term "Panel Plane" to describe planes that are too long to be smoothers and too short to be very accurate jointers. 13"-18" long or thereabouts. These planes are a wonderful size and perfect for dressing timber in most cases.

In the front on the left is a C. 1830-1840 panel plane by Robert Towell This is one of the earliest iron panel planes in existence and it might have even been an experiment by Towell. It predates the typical construction of a panel plane and internally it is more like a mitre plane, with the bevel down but a mouth cut in and the sides wrapped around. Next to it on the right is a 13 1/2" A1 Norris panel plane. C. 1920's This is a very very nice plane to have for planing boards when accuracy isn't the primary concern (although it is more accurate than a smooth plane and usually has a wider blade). As mentioned earlier I mostly use a 17 1/2" panel plane, but you can use a longer and less wieldly longer plane to give you your accuracy and do the bulk of your work with this plane. As antique tools go these shorter infills are far more common, although it's important to get one in good original shape, and too much "restoring" can lessen the very properties that make these planes desirable in the first place. Stanley make a panel plane sized number 5 1/2, but I find the balance off and it has never had much appeal for me.

Now that I have a planer (I didn't use to) I find myself reaching for long planes less and less. If you really want to work unplugged even for milling timber a No 7 or better yet a wooden long jointer is a wonderful thing to have. The other options are IMHO too heavy (please don't write me if you love your No. 8 - that's fine but this blog is about what I find useful).
If you mostly use machines for planing wood really all you need is a smoother you can count on, but a panel plane is really nice to have. 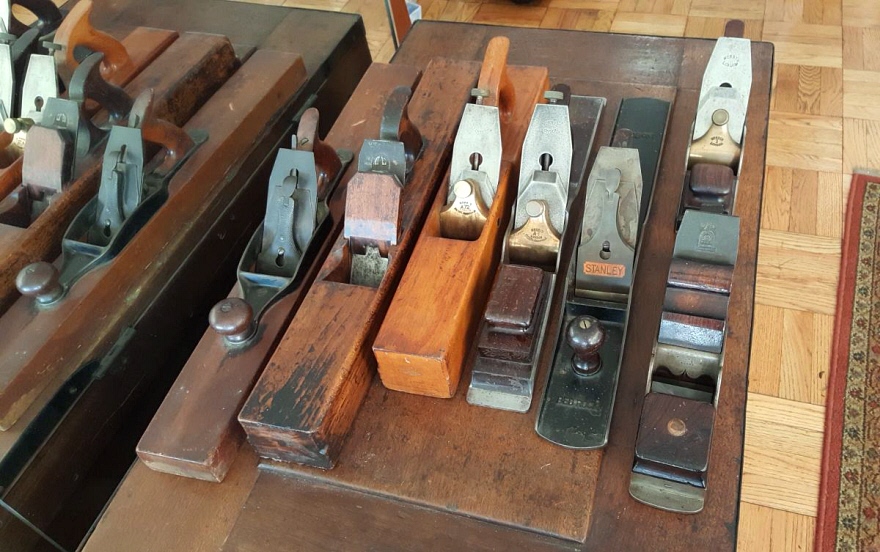