The "CityWall", a collaborative social space in Helsinki, Finland 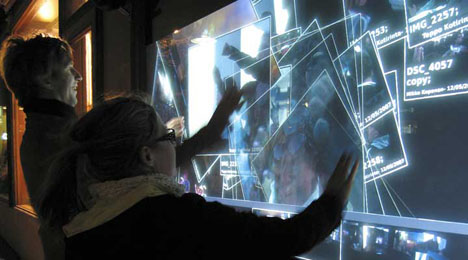 In a practice dating back to ancient Rome and attributed in origin to Julius Caesar, where the Acta Diurna ("daily events") of political and social events were posted on the city walls, Helsinki, Finland's capital, has launched The CityWall (images - video), a large multi-touch display installed in a central location, a great example of the simplicity of multi-touch displays and surface computing, and the collaborative and playful human engagement that it naturally leads to.

Using a series of intuitive gestures users can navigate and arrange media as if you were manipulating physical pictures. The touchscreen technology which enables this direct interaction has been specifically designed so that several people can interact directly with display at the same time.

The CityWall is located in downtown Helsinki, Finland. It can be found in Lasipalatsi opposite Forum. The touchscreen technology and applications have been developed by the Ubiquitous Interaction research group at the Helsinki Institute for Information Technology, as part of IPCity.

Via Influx Insights, Surface Sightings and The Daily Galaxy.

The "CityWall", a collaborative social space in Helsinki, Finland