Inside Auto Design: How People Getting Hit By Cars Has Changed the Shape of Cars

When automotive designers do initial concept sketches, they appear to be freewheeling, loose and expressive. But we all know that in order to translate that collection of lines and curves into an actual car, there's a lot of back-and-forth with engineers and executives: Will the engine we've selected fit? Can we slide the windshield wiper motor this way so that this cowl design looks visually appealing? Does this B-pillar offer enough structure? The practical requirements are so manifold, it seems a miracle that any design elements from the original sketch make it into the finished car at all.

One important factor that helps determine the shape of cars, and which most Americans are probably unaware of, is that each year over 270,000 cars slam into pedestrians and kill them. Governments in Asia and Europe find this statistic unacceptable, and in the first decade of the 2000s began passing laws requiring their native auto manufacturers to design cars that would increase the survival rate of a struck pedestrian.

To understand how this has influenced Asian and European car designs, we must first understand what happens when a car hits a person. Understand that the majority of these accidents occur at relatively low speeds; obviously cities contain the highest concentrations of pedestrians and cars in close proximity, and no car in a city center is traveling at 100 k.p.h. In such low-speed impacts, this is how it goes down:

As you can see, there are really two phases to the accident whereby a pedestrian can sustain injury. The first is the actual impact with the car, and the second is the impact with the ground that happens after they are thrown forward.

Short of devising a method for a car to keep a pedestrian stuck to the hood on impact, there isn't much a car can do to prevent injuries from that second phase. Plus research showed that 80 percent of deaths came from the first phase of the impact. Watch this clip and you'll understand:

In that first phase, the pedestrian's legs are struck by the bumper. People can survive with broken legs. But what did 80 percent of them in was when they then slam their head into the hood of the car. So that's what the automakers, prodded by legislation, began to focus on.

The sheet metal that most car hoods are made from is relatively soft and deformable. Smacking a person's head into it could be survivable. The problem is that just millimeters beneath that soft sheet metal is a solid engine block, and that's what was cracking people's heads open. So automakers began designing clearance between the underside of the hood and the top of the engine, leading to "higher hoods and taller noses," as Car and Driver put it. "But that little bit of air over the intake manifold ripples through and changes everything" with regards to the shape of the car: 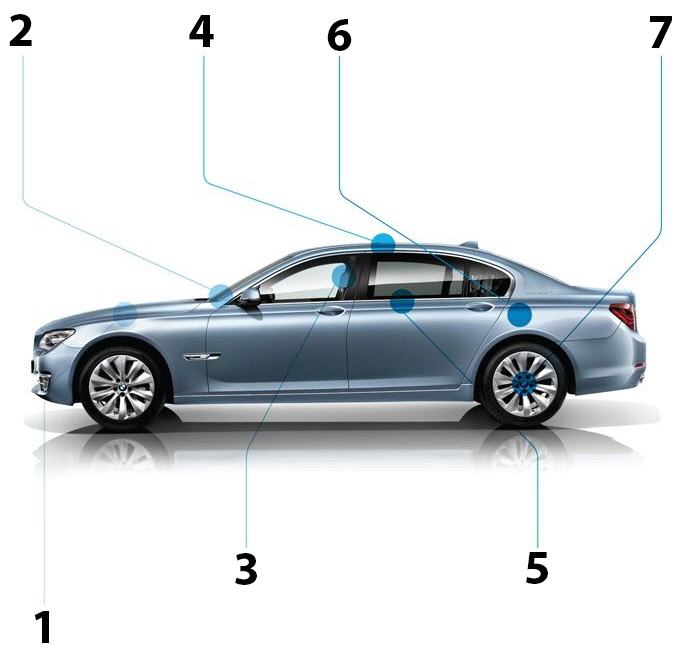 1. A minimum of 20 mm (0.8 inch) of clearance is required between the underside of the hood and the highest part of the engine or any other hard point such as the windshield-wiper motor or the HVAC plenum. This raises not only the front of the hood but also its trailing edge by at least 0.8 inch.

2. With the rear edge of the hood elevated, the entire cowl must be raised a like amount—or a bit more if the designers want a wedge-shaped profile. This moves the windshield base and the dash higher as well.

3. A taller cowl and dash force the front seats to be raised for visibility.

4. With people sitting higher in the car, the roof goes up to maintain headroom.

5. Now that the roof is higher, the beltline (the base of the side windows) has to be lifted to keep the car from looking bubbleheaded.

6. The higher beltline adds sheetmetal above the rear-wheel openings, reducing the wheel-to-body ratio.

7. Would you believe that pedestrian protection influences wheel sizes? With wheel openings relatively smaller than those on cars made before the regs, the 245/50-18s on, say, a base BMW 7-series don't look very big at all. The solution has been to fit 19- and 20-inch wheel/tire packages to replicate more attractive proportions.

Some cars have shorter hoods, and in those instances, a taller pedestrian can die by smacking his or her hood on the windshield or even the A-pillar. 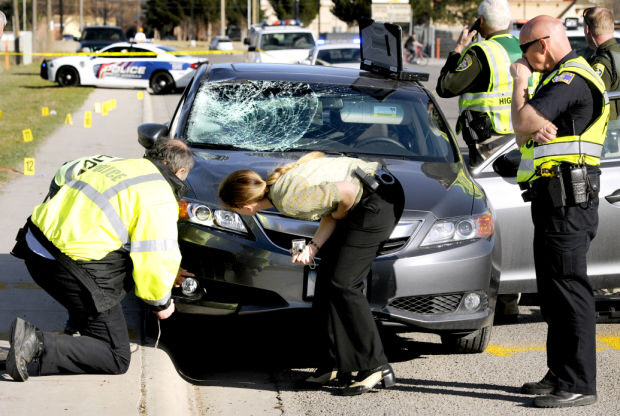 Obviously windshields must be made strong enough to protect the car's occupants from projectiles, and the A-pillars must be kept stiff to protect the occupants in the event of a rollover. How can they be made soft enough to not crack a pedestrian's skull open? They can't. So to solve that problem, Volvo designed an external airbag. Sensors in the front of the car detect when they have hit something, and a small explosive charge raises the rear of the hood and deploys a protective U-shaped airbag: 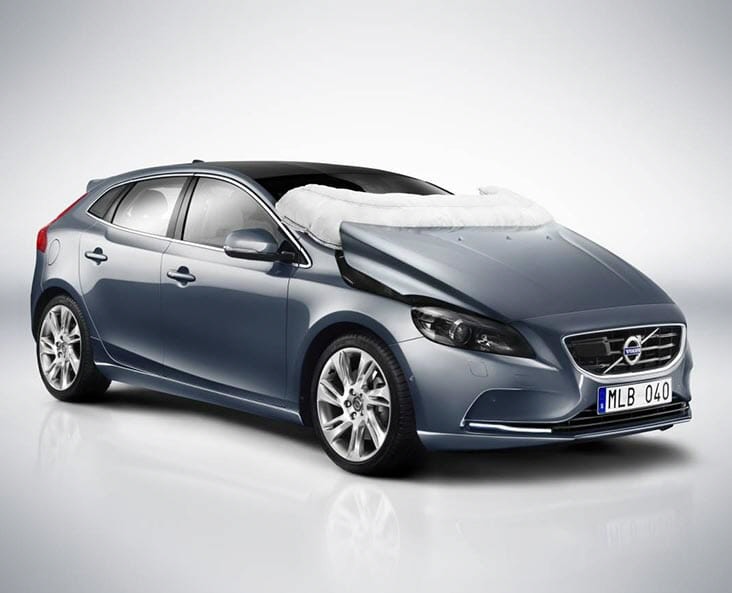 Other automakers like Jaguar, Lexus and Citroen have similar systems that use charges to raise the hood in a crash (but do not feature external airbags), and Hyundai is developing a system that does the same via a pivoting hinge, as seen below. 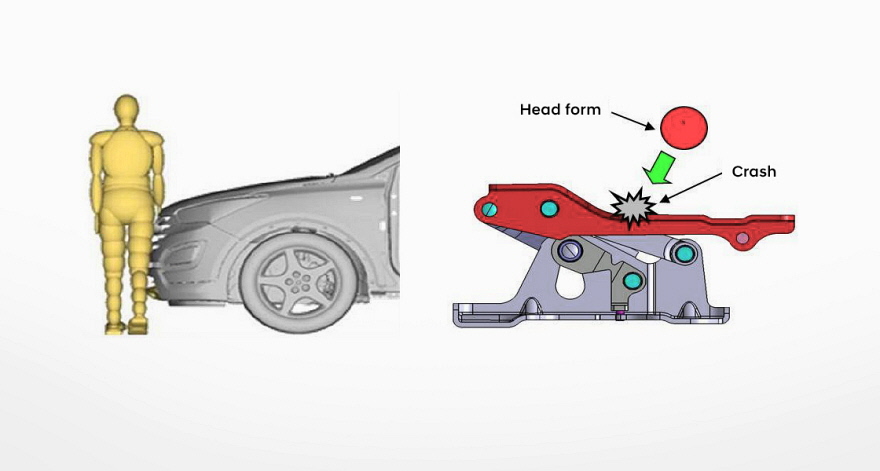 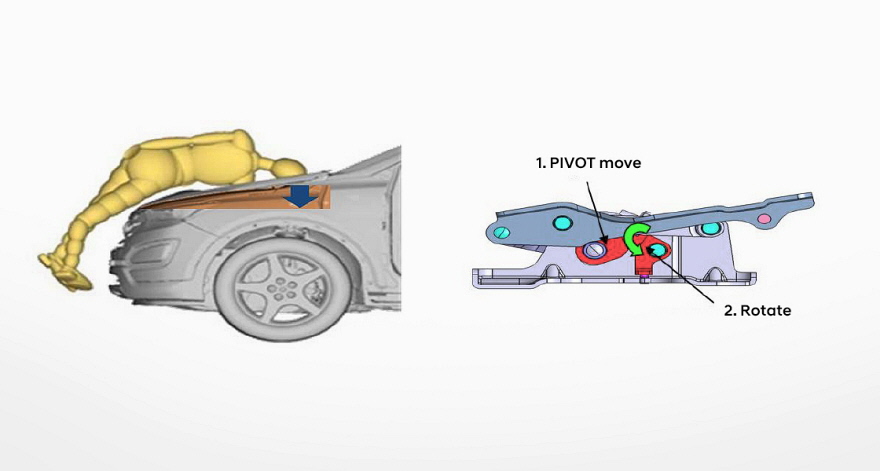 Of course, sensible engineers realize that it would be better if pedestrians were never hit by cars in the first place. Thus many automakers continue to develop systems like Volvo's City Safety Technology, which uses sensors to detect pedestrians and cyclists ahead and automatically slams on the brakes if they step or swerve in front of you. 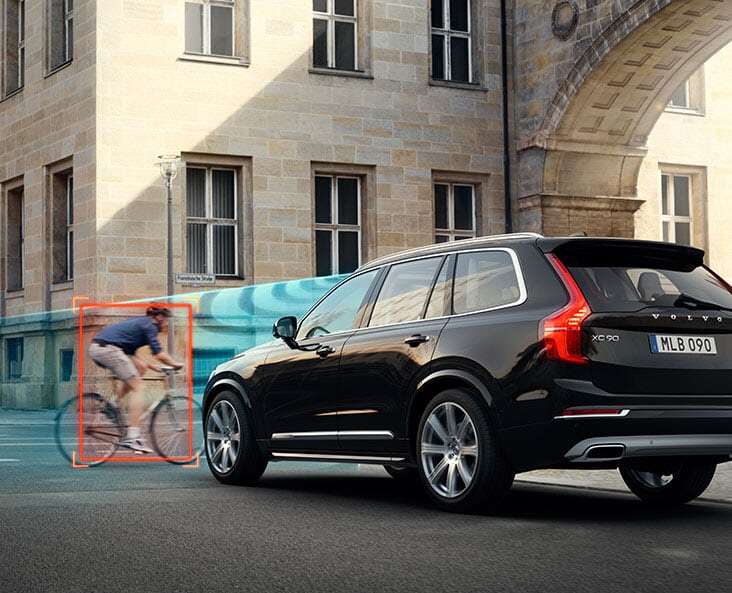 If autonomous cars do indeed become widespread and accidents become a non-issue, it's possible we'll see a return to the low-slung car forms of the '70s, '80s and '90s.

Earlier I'd written that "most Americans are probably unaware of" cars being designed to protect pedestrians. That's because ten years ago, when pedestrian safety design features began gaining traction in Europe, Japan and Korea, America's NHTSA offered evasive excuses for why they were not interested in pursuing such legislation here. As journalist Martin Schwoerer wrote at the time,

In a phone interview, a NHTSA (National Highway Traffic Safety Administration) spokesman told me that America's vehicle mix-– more trucks and SUVs— isn't as conducive to pedestrian-friendly technology as cars in the Eurozone. NHTSA research suggests that there are unexplored trade-offs involved. "You can make a car front better for children, but then it may get worse for adults." Why not publish pedestrian-safety ratings and let the consumer decide? "Again, we don't think you can find a one-size-fits-all solution."

According to Prof. Florian Kramer at Germany's Dresden Technical University, those are weak arguments. "Of course it is difficult, but in constructing cars, everything is a compromise," he says. "The point is, there is very much room for improving the pedestrian-safety of cars."

Inside Auto Design: How People Getting Hit By Cars Has Changed the Shape of Cars