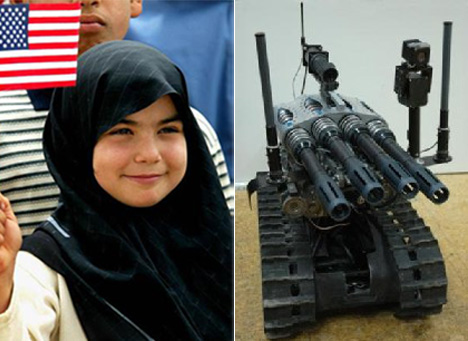 The first armed robots have hit the streets of Iraq and are now hunting evil-doers with high-powered M249 machine guns. The robots are called SWORDS, which stands for "Special Weapons Observation Reconnaissance Detection System". Army focus groups apparently preferred this acronym over the more obvious PUBE (Predatory Unmanned Battle Engine). The robots are currently being piloted through the streets of Bagdad using remote control. According to an interview on CNET with Chief Army Scientist Thomas Killion however, the army soon plans to make the killing machines fully automatic. "The FCS [Future Combat Systems] program is demonstrating semiautonomous vehicles where they can do a lot of planning and execution on their own and they really only have to essentially call home to a soldier that's controlling it when it needs additional guidance."

The grim-looking murder bots are likely to fill the hole left in the hearts and minds of the Iraqi people when the British withdrew their blood-thirsty badgers.

Robots are also needed to fill the ranks of a military that is desperately short of troops and facing growing criticism over civilian deaths. While flesh-and-blood troops can be subject to embarrassing prosecutions, robots have an advantage that must surely appeal to the Bush administration. Being a robot means you never have to say you're sorry. As the manufacturers of handguns have repeatedly demonstrated, just because you build a machine whose sole purpose is to kill people does not mean that you are responsible when people get killed. If a robot were to commit a crime--say opening fire on a group of unarmed civilians--who would be responsible? Of course the robots themselves cannot be prosecuted for war crimes, but can the army's roboticists and programmers? After all, as Killion states, the autonomous robots will themselves be responsible for "planning and execution." All one could hope to get out of any legal proceedings would be a verdict of "malfunction."

It's no wonder that the military regards robots as the next "killer app". We can all rest easy in the knowledge that whatever horrors killer robots may perpetrate upon the enemies of freedom--there will be nobody to blame.