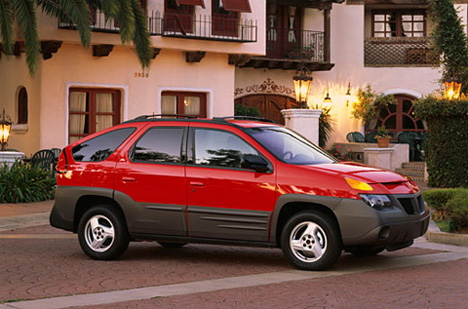 According to a survey ordered by Hagerty Insurance, a specialist in collector cars, the AMC Pacer comes in at numero uno for the worst design car of all time.

McKeel Hagerty, CEO of the company, ordered up the survey after noticing that several of what he calls "nerd cars" were increasing in value. He says he was surprised when the Pacer-a notorious dud from the days of disco-topped the list. Hagerty bought himself a dark green 1976 Pacer three years ago for $2,300. "If anyone thinks I'm picking on Pacer owners, guess what-I am one," he says.

Badly designed is one thing, but "ugly" is in the eye of the beholder. A few picks, including the Ford Pinto and Chevy Chevette have lots of vintage-flair camp value. This is the main reason why Hagerty ordered the survey, "after noticing that several of what he calls 'nerd cars' were increasing in value." However, we must agree that #4, the Pontiac Aztek, is one hell of a fugly eyesore on wheels. Woof.