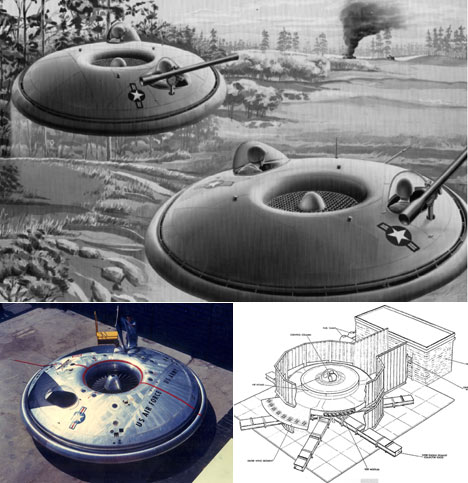 Wikipedia has a fascinating section devoted to the maverick engineer "Jack" Frost's "proof-of-concept" test vehicle he called the Avrocar. Funded by the US army who were undertaking several experiments on smaller VTOL aircraft that would act as a "flying Jeep", 2 units were built and later abandoned due to stability issues.

Pilot control was entirely through a single side-mounted control stick. Pitch and roll were controlled through conventional fore-aft and side-to-side motions, while yaw could be controlled by twisting the stick. No mechanical linkages were used, the stick instead controlled the flow of high pressure air around the craft, which either directly attached to various control surfaces, or indirectly through local cable linkages to replace controls that were intended to be cable-actuated (like throttle controls on the engines).

Spotted over at the Antenna Research Facility