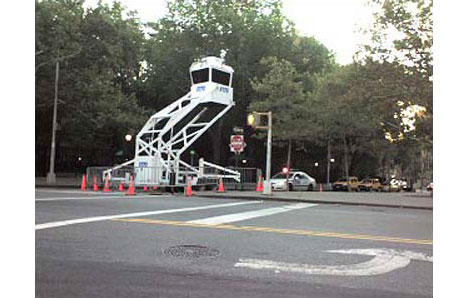 For better or worse, NYPD trends and tactics are often taken up by other departments in the United States, and Los Angeles even took our former police commissioner. But this next one, we're not so sure about.

When the NYPD rolled out "Sky Watch" last year, it raised some eyebrows along with its rather menacing observation shed, bristling with cameras and mics and wrapped in tinted glass, that elevates to a height of two stories. It was initially deployed in high-crime areas of Crown Heights and Harlem, so we were surprised to find one has just been deployed to Chinatown's Seward Park, which is mostly covered with families and elderly people.

It is perhaps the prevalence of families and the elderly--prime targets for muggings--that has apparently led to a recent string of robberies in the area, hence the deployment of Sky Watch, the NYPD explains. And so the debate between safety and privacy continues. But man--couldn't they have designed a less stormtrooper-like tower?