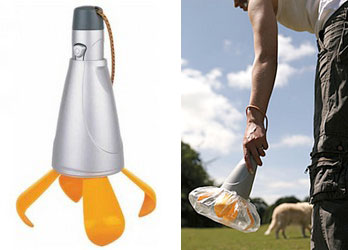 Seinfeld used to joke that if aliens were observing us--specifically, if they were observing us urbanites tethered to dogs and picking up their poop--they'd conclude it was the dogs who were in charge.

The Swoop was designed to make our poop-scooping duties less messy; you wrap your plastic bag around the claws, which grab the target matter before a spring turns the bag inside-out. No muss, no fuss. And until dogs learn industrial design, we'd say we're still in charge.