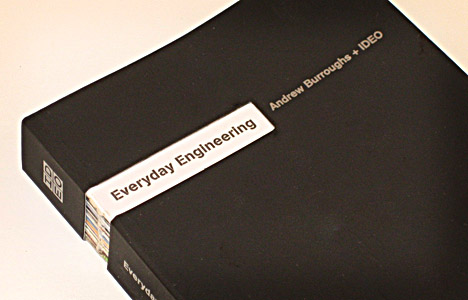 At a meager six inches tall by four inches wide, the petite Everyday Engineering doesn't seem to be the most likely candidate to stand out in a bookshelf, but its innovative spine captivates. As is done through the photographs inside, Andrew Burroughs has cut away the side of the book to reveal the construction of the binding. A combination of bundles of brightly colored paper, glue and string, the exposed guts of the book make for a compelling contrast in a sea of bland jacket design where the only other three-dimensionality usually comes from raised type.

Burroughs is an engineer who has worked for IDEO for the last 15 years and currently leads their Chicago office. Everyday Engineering is subtitled "How Engineers See," and Burroughs makes no apologies to designers for his engineering sensibilities. Everyday Engineering contains very little text, instead relying on nearly two-hundred pictures of design details submitted by IDEO employees that explain the hidden world that design details can communicate and laypeople often miss. In a section called "Unseen," for example, a photo of a mundane fire-hydrant perplexes, until paired with the opposite page, which shows uninstalled fire-hydrants on a construction site. In contrast to their usual orientation, these hydrants are jarringly piled sideways, and surprisingly sprout seven feet of straight black tubing from their bases -- a part that's usually buried for few dogs ever to see.

Every photo is interesting in its own way, although some held mysteries too deep for me to discover without peeking in the index for an explanation. There's little doubt, however, that most are photographs that only an engineer could love. Though individual pictures are beautiful, many of the photos within are strikingly unattractive, and not just the one in the section entitled "Ugliness." In some, gaudy colors pop off of the page, while others seem underexposed, dull or out of focus. Composition usually places the subject matter in the dead center of the page, and on top of all that, most of the objects photographed were aesthetically unappealing to begin with. Everyday Engineering does not presage the next Walker Evans of design photography, nor does it mean to. While a few of the pictures can be read as abstract art (particularly those of broken and randomly decaying objects), the overall impression is of quick snapshots taken at the very moment that the little details of the world pass by its lens.

For the primary pages the photos are full bleed and butted next to each other for maximum size. Because the photos were not carefully chosen by an art director, they stand in stark contrast to one another. Their visual disagreement forces the viewer to assess the content of the photo rather than the layout of the page. For all of that and more, I applaud Andrew Burroughs for taking the effort to show the tiny world of design details. In a world of overly pretty coffee table books, this one takes the opposite tack and rewards the reader for following along. Nearly the entire layout of the book emphasizes function at the expense of form. It's rife with design details, such as the curved corners that I assume have been added to avoid the tiny little dog-ears and bends that corners tend towards after reading. Clearly, such care will lead to a longer life for the text, even though the round corners make for an uncomfortable layout next to the square headers on each page (or is it simply that I haven't seen many books with round corners?).

When needed, however, the authors are willing to resort to graphic design exercises. In the index at the back of the book, pictures of each page are arranged in a grid with carefully aligned text and leading for maximum organization. Back there, the disparate content and color schemes of the photos coheres as a whole since they're organized with such uniform logic. The visual comfort of the index serves to starkly remind the reader of just how bracing the previous pages had been. Each layout serves its purpose precisely.

Everyday Engineering stands as a profoundly different and difficult to categorize book. What does one do with a collection of artistically dubious photographs of the failings and nuances of human engineering? The accompanying text offers explanations of the thought behind the creation of the categories, but provides little prescriptive advice. Instead the reader is left to make his or her own conclusions. Mine was rather Buddhist: be mindful, both of yourself and your environment. Perhaps in doing so, even those unschooled in engineering can notice the occasional care taken in design details like a near-perfect weld (p. 14), avoid pitfalls like a visually unstable swing set (p. 44), or simply bask in the casual beauty of a witness mark left by a fallen leaf in setting cement (p. 171). These are small stories, but ones worth telling.