Material Implications for the Future of Mobility

The following is a sponsored post, courtesy of Covestro.

It used to be that the lines between various key industry sectors, such as automotive, electrical/electronics, appliances and healthcare were relatively clear and distinct. No more.

Current trends—as underscored by various pronouncements and product introductions at the CES 2018 trade fair in Las Vegas and the recent North American International Auto Show (NAIAS) in Detroit—indicate a convergence of technologies and industries on a scale never seen before. Look no further than the fact that CES (formerly the Consumer Electronics Show) now claims to be the fifth-largest stand-alone automotive show in the United States. 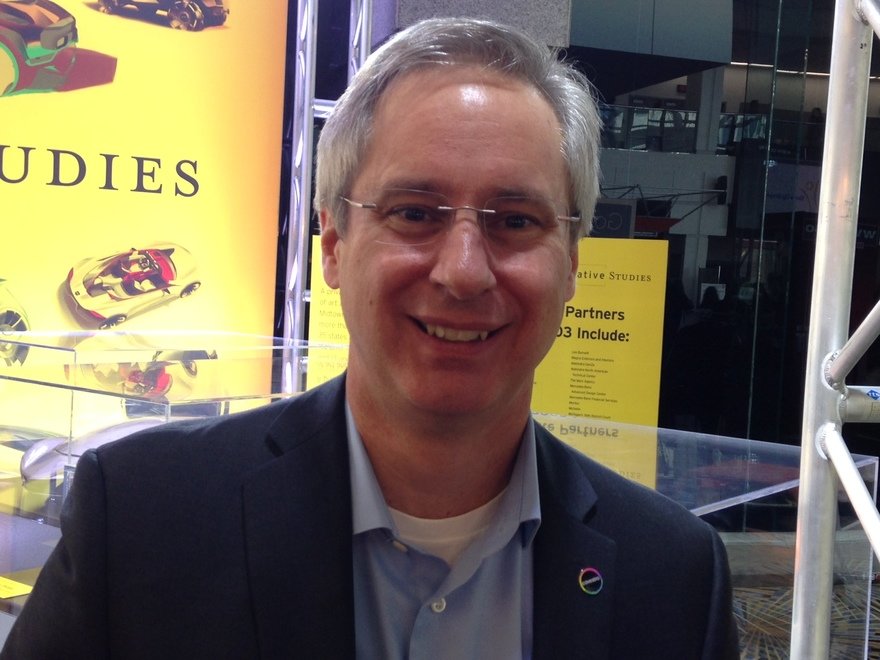 The rise of "smart" technologies, electric and autonomous vehicles, and always-on connectivity between users and every type of conceivable device, is prompting a radical makeover in the very essence of the automobile. And the implications for design and materials choice are profound.

For materials supplier Covestro, this (r)evolution spells opportunity, according to Paul Platte, a senior marketing manager for automotive at the firm's North American headquarters. As the world's largest producer of the tough, clear, lightweight engineering thermoplastic marketed as Makrolon® polycarbonate (PC), Covestro sees future vehicle trends as lending themselves to the properties of that material. 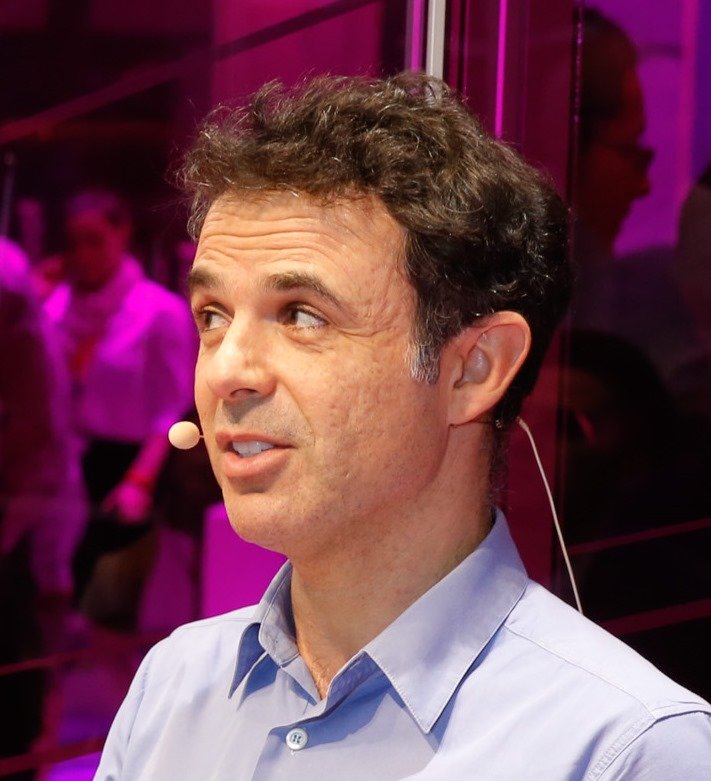 "The huge cultural shift that is going to happen in cars in the next 10 years will change the relationship owners have with their vehicles, and materials are going to be the biggest instigators of this change," according to Chris Lefteri, a London-based designer and materials expert. "Motivations for car use are going to be redefined and no longer primarily about getting from A to B. It will also be about the pleasure of the journey and wanting to share time with friends while experiencing a great view will be another. As a result, it's going to be how passengers want to feel." 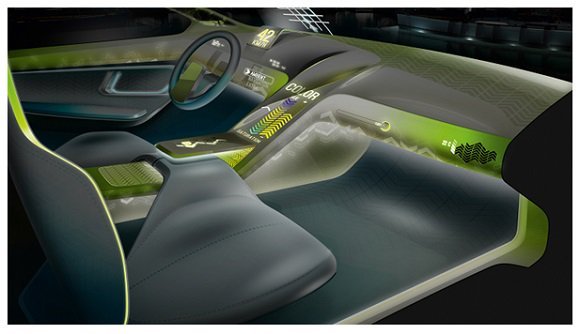 Covestro sees strong demand for TPU films in the automotive cockpit of the future. (Illustration courtesy of Covestro)

Polycarbonate already finds use in a number of automotive components, from panoramic roofs and rear spoilers, to touchscreen displays and lighting systems. At roughly half the weight of glass, PC can greatly reduce vehicle weight. This is vital since automakers are seeking to save every possible gram, with a view to reducing fuel consumption or boosting the battery life of electric vehicles. For these reasons, Covestro predicts the share of its materials in vehicles will rise dramatically as vehicles move from conventional to electric vehicles.

Polycarbonate additionally offers design freedom to vehicle designers. Nowhere was this more evident than on some of the latest model launches and concept cars unveiled at CES and NAIAS.

"The convergence of technologies is going to mean that materials for car interiors need to have electronics, lighting and sensing devices embedded that are going to change the passengers' interactions with the interior," said Lefteri, who heads Chris Lefteri Design Ltd., which also has offices in Singapore and Seoul, South Korea. "Lighting is already huge and it's going to become even more so. As such, PC is going to be a material that facilitates this, not just through light and color transmission and light diffusion, but also through transparency and larger lightweight windows that will help to create effects that can be changed depending on mood." 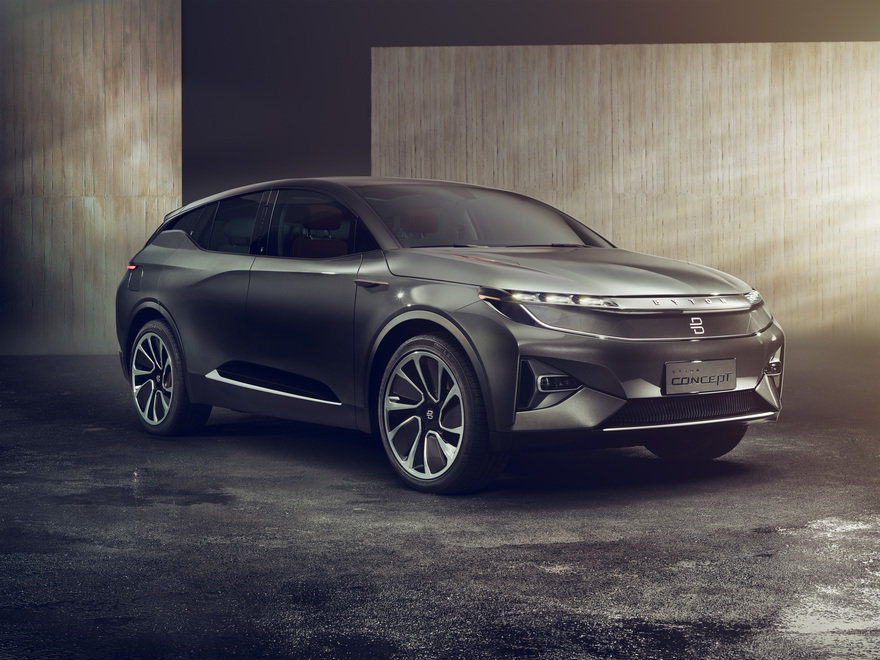 At CES, a Chinese automotive startup called Byton launched its first concept vehicle —a mid-size, electric, autonomous SUV that it says it will make at its plant in Nanjing and sell in China by the end of next year, and in the U.S. and Europe in 2020.

It offers a broad slate of futuristic features, including facial-recognition cameras embedded in the B-pillars for unlocking the doors, side-view cameras instead of traditional side mirrors, and a "shared lounge experience" in the cabin. The interior focal point is a huge, curved 49 x 9.8-inch touchscreen that's positioned where the instrument panel typically resides, along with three additional display screens, and front seats that rotate 12 degrees inward. 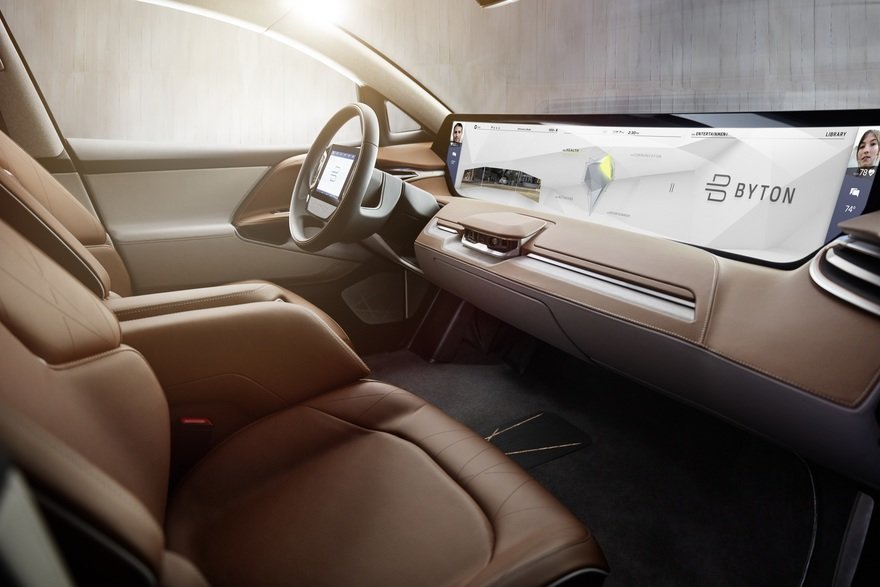 Many vehicles at both events focused on passenger interaction, display screens, and sensors such as those used with LiDAR to enable autonomous driving. LiDAR stands for Light Detection and Ranging—a remote sensing method that uses light in the form of a pulsed laser that can detect, locate and measure objects and their variable distances. Platte explains that LiDAR systems can be solid state (non-mechanical, but with a limited field of view, requiring multiple fixed sensors to capture all necessary angles), or mechanical (often involving an encased, "spinning top" type of device that offers accurate, 360-degree detection).

Both systems—as well as lenses for such things as on-vehicle cameras—require a very high degree of optical purity in the lens material to ensure accurate readings, he notes. A further challenge is the desire by automakers for these lenses to appear opaque to the human eye, but to be fully transparent to the LiDAR device when operating. 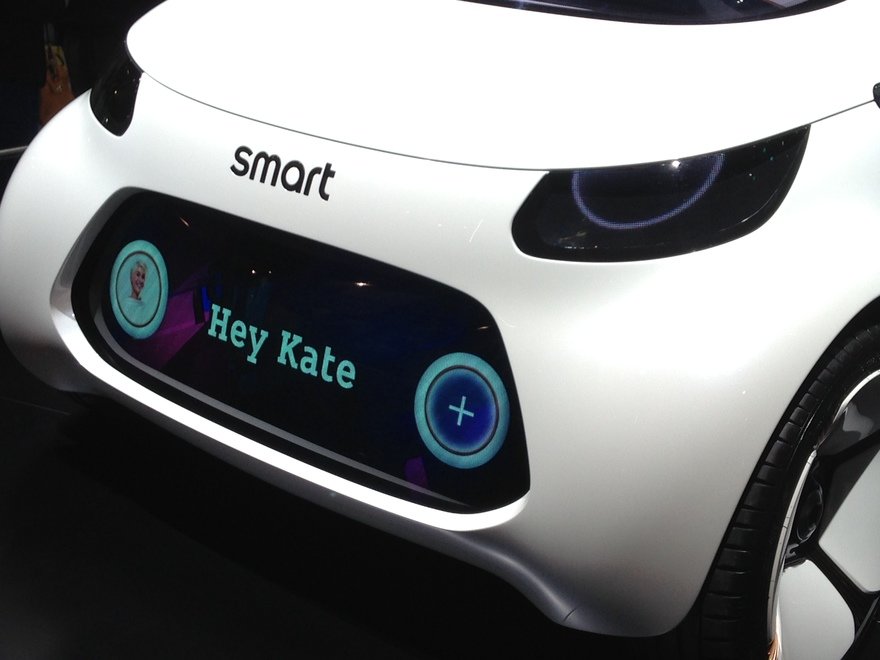 The Smart Car showcased on the Mercedes-Benz booth at CES offered an example of how a front-end display might be used. (Photo by Robert Grace)

Electric vehicles also do not require a radiator or venting in the vehicle's front grille area, freeing that real estate to be used as an electronic display, if desired. Some concept cars at those recent shows demonstrated, for example, how such displays might be used to welcome the driver to the car, or to alert pedestrians of the direction the car intends to turn. 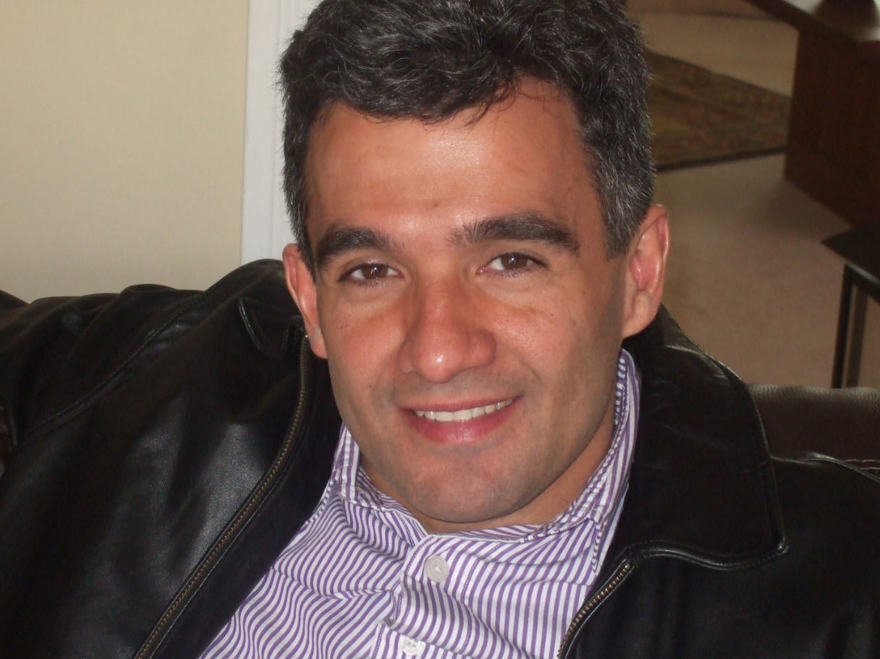 Dr. Ignacio Osio, Covestro's lead on Electric Vehicle Battery Packaging, notes that EVBP is another key growth area for Covestro's global polycarbonates business. "We have multiple products targeting multiple applications, but a key combination is our Bayblend® FR3010 PC/ABS grade targeting the manner in which the batteries 'package' into EVs," Osio says.

In addition to being used to package the batteries, Covestro materials also contribute to the cooling of the battery cells, as heat can build up during the rapid charging cycles demanded by today's EV owners. These material needs also extend beyond electric cars, to include other forms of transportation, such as electric buses, trucks, motorcycles, bicycles, charging station stands, and the like.

The expected rise of autonomous vehicles—combined with the "sharing economy" principles embraced by many in the Millennial generation today—will lead to an increase in "mobility as a service" (MaaS), experts note. Driver-less vehicles will pick up and drop off passengers, deliver goods and services to consumers at home or work, and provide vehicle-sharing opportunities. 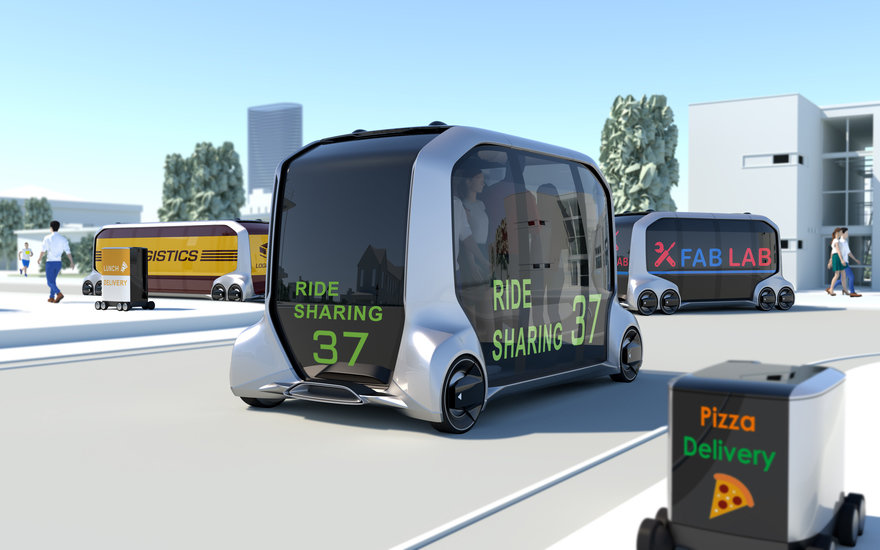 Many automakers already are investing heavily in this area, with Toyota Motor Corp. among those taking a leading role. Toyota President Akio Toyoda at CES announced its new e-Palette Concept Vehicle (and related e-Palette Alliance of partners), which features three different-sized autonomous vans (from 4 to 7 meters long), each with a highly customizable, open-interior design layout. 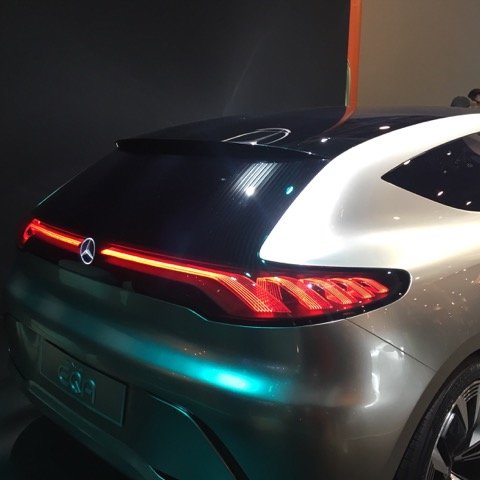 Platte points out that MaaS brings with it materials-related implications in such shared vehicles, which will require extreme levels of durability and cleanability, connectivity via touch-screens and displays, ambient lighting, and design cues for differentiation (brand to brand, or vehicle type to vehicle type)—all of which offer great opportunities for polycarbonate resins. In addition to the design of increasingly complex and intelligent headlight systems, the next generation of vehicles also promises to employ lighting in many innovative ways, from mood-setting ambiance to personalization. There was no shortage at CES or NAIAS of such examples, with production and concept vehicles alike cleverly incorporating LEDs, light pipes and light blades to create 3D or "jewelled" styling effects, as well as ambient lighting inside the cabin. 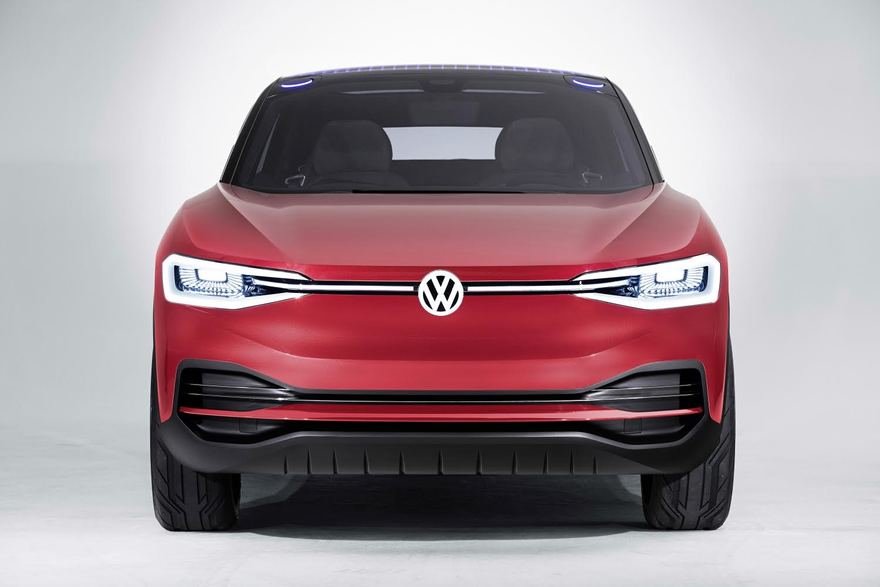 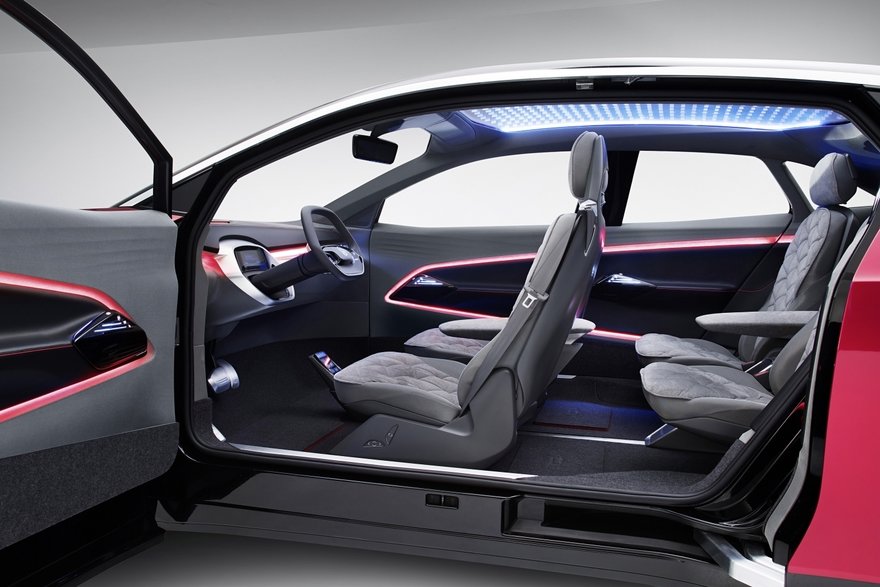 Volkswagen's I.D. Crozz autonomous crossover concept vehicle also showcased a creative use of lighting, both on the exterior, with its lighted front badge, and inside, as an ambient mood-setter. (Both photos ©2018 Copyright Volkswagen US media site)

One good example was the concept EV crossover coupe, I.D. Crozz, that Volkswagen AG displayed in Detroit. It included an illuminated VW front logo as well as a solid, wide light bar connecting the right headlamp to the logo and left headlamp, along with extensive colored lighting runs inside the vehicle that not only can personalize the vehicle but also help to make the interior look bigger.

Technology is redefining transportation and the future of mobility. These changes will create challenges while also generating enormous opportunities for designers and suppliers of advanced materials. Covestro has shown it is fully prepared and already rising to take on the challenge.

Covestro is one of the leading producers of high-performance polymers in North America and is part of the global Covestro business, which is among the world's largest polymer companies, with 30 production sites worldwide and approximately 15,600 employees. Through research, innovation and a commitment to sustainability, Covestro manufactures high-tech polymer materials and application solutions for products used in nearly every area of daily life. Main segments served are the automotive, construction, wood processing and furniture, electrical and electronics, and medical industries, as well as sports and leisure, cosmetics and the chemical industry itself.